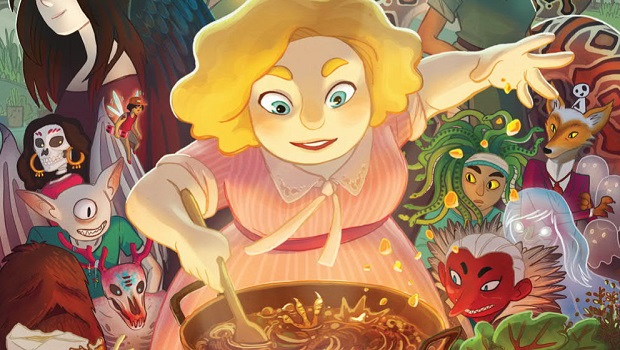 A little guilty pleasure of mine is cooking shows. Whether it be the lighthearted conflict of The Great British Baking Show or the stressful battles of Hell’s Kitchen, I love me some food fights here and there. Kaboom!’s Brave Chef Brianna is a miniseries that aims to emulate the wonderful world of cooking in the eyes of an aspiring chef, and its first issue is a wonderful appetizer that shows its potential.

The first issue of Brave Chef Brianna follows the titular character as she is suddenly thrown into a cooking competition with a multitude of her brothers. Due to the family’s father suffering from a terminal illness, he declares that the person who builds the most successful restaurant will inherit his empire.
While the others quickly get to work, Brianna suffers from a lack of self-esteem, which manifests as some sort of monstrous being that lambastes her every move. In a sudden burst of inspiration, she stumbles upon an ad for real estate in Monster City, a place where monsters and humans have been in an unknown conflict for quite some time. After reluctantly recruiting a harpy by the name of Suzan, Brianna needs to face figurative and literal monsters as she works through her self-esteem issues and cooks her way to the top. She must also deal with strict Monster City by-laws, some of which forbid humans and monsters from eating each other’s food.

For a first issue, the subject matter is very ambitious. I really love Sam Sykes’ characterization of Brianna as a relatable wide-eyed optimist who has a streak of self-deprecation here and there. She’s simultaneously peppy and grounded, which contrasts nicely to the bleak setting of Monster City. She knows she’s out of her league when up against her competition, but she believes that she can persevere and grab her slice of the pie. It’s a good foil to Suzan’s character, a down-to-earth snarker who barely tolerates Brianna’s upbeat attitude.

The art style feels reminiscent to other Kaboom! titles like Bee and Puppycat or Bravest Warriors. The characters are simply drawn and shaded, and the action is more focused on the characters rather than backgrounds or settings. Brianna herself feels like she’s a run-of-the-mill character, but that actually stands out in a world full of mystical creatures and monsters. It makes her fish-out-of-water disposition more believable as she looks starkly different than, say, Suzan or the other monsters. The monsters themselves are pretty unique, and the first group of customers feels detailed and odd.
However, as much as the first issue shows promise, I’m a bit worried about its length, this being a four-issue miniseries. One of my favorite comics from last year, Kennel Block Blues, had the same length of issues and ran into problems with pacing and characterization. While I can see the upcoming development that Brianna and Suzan will run into, the overarching narrative (that of the yet-unknown monster and human conflict with a mysterious figure in the last few pages) may be swept away in favor of developing the main characters. I would really love to figure out more of the lore of Monster City, and four issues might not be enough to fully flesh it out while also providing a satisfying conclusion to Brianna’s character arc.

However, while its duration may be a little on the short side, Brave Chef Brianna shows heart, great characters, and a fun little romp down a city of monsters. This all-ages title was a great read, and I’ll be waiting for what this miniseries cooks up as an entrée.

Elisha Deogracias is an aspiring accountant by day, freelance writer by night. Before writing for Gaming Trend, he had a small gig on the now defunct Examiner. When not being a third wheel with his best friends on dates or yearning for some closure on Pushing Daisies, he's busy catching up on shonen manga and wacky rhythm games. Mains R.O.B. in Smash. Still doesn't know if he's a kid or a squid.
Related Articles: Beyond the Page, Brave Chef Brianna
Share
Tweet
Share
Submit