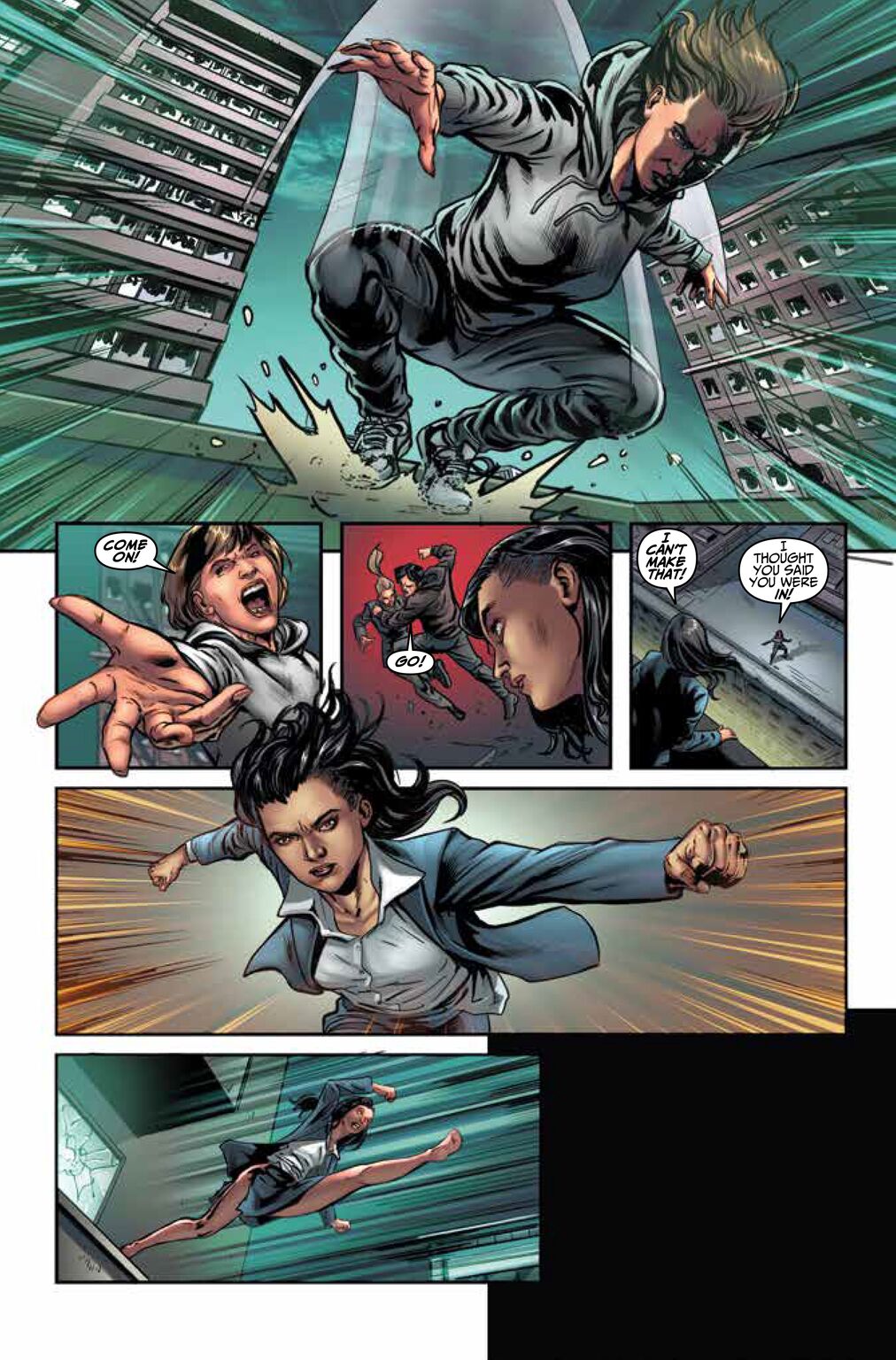 In tandem with the release of Assassin’s Creed: Syndicate, Titan Comics has embarked on a new soft-cover comic series set in the well-worn conflict between the Knights Templar and the Brotherhood. The story team is comprised of Anthony Del Col and Conor McCreery, drawn by artist Neil Edwards and coloured by Ivan Nunes. Priced at $3.99USD and on comic book stands everywhere, I got a chance to sit down with the first Assassin’s Creed comic (in digital form).

Struggling to get by in the concrete jungle, protagonist Charlotte de la Cruz (aka Char) has shown proficiency with an online VR game sold by Abstergo and inadvertently draws attention to herself. Her online gaming has netted her some unexpected friends in the Brotherhood though, and after an attempt on her life she decides to side with the assassins and see how far down the rabbit hole goes as she delves into her ancestral past.

The time period shared in the first comic begins to explore the Salem Witch hunts. While the pacing felt too quick to identify with Char as anything more your typical comic-book-perfect looking woman with an iron will and geek cred, the art and set pieces make me curious to see where this takes us. The story arc suggests this plot line is covered in five parts.

As far as a creation story goes, the beginning is not much different than Assassin’s Creed 2 complete with similar power struggles and personality clashes within Charlotte’s new team. That’s not to say that I expect a lot from a comic that weighs in at 32 pages cover-to-cover; the content may simply feel familiar due to the source material.  I hope that these characters become more than just sets of opposing ideals and archetypes. The world within Assassin’s Creed has so many potential story-lines that can challenge and intrigue us, and it’d be a pity if that world became unpalatable because the content fails to make any impact.

Char certainly takes issue with the ancestor she’s trying to connect with, which creates an interesting narrative as she’s forced to execute actions that go completely against her makeup.

Given that I have reviewed the digital version, I can’t comment on print or binding quality, however the art is on par for what you would expect from a quality comic. What I can say for certain is if you are looking for more Assassin’s Creed with a strong female protagonist, this certainly fits the bill. With the second comic coming out November 5th, I look forward to where Titan Comics takes us.

Born and raised in Winnipeg, Canada, at a young age I was forced to decide whether the harsh northern winters were going to claim my fingers, or to turn to the safer pursuits of indoor activities. Little did I know that a little game called Ninja Gaiden would bring my digits more pain than frostbite ever could. Starting with Vectrex and C64 games and moving forward through the era of electronic entertainment, I sampled as much as I could in the different platforms, and began my interest in PC gaming from wrestling with DOS memory management. While console games were a part of my earliest gaming memories and I certainly had played on most platforms including 3D0, all things Nintendo, PS1 and the like, truly the PC was my domain until the Xbox. As an old PC gamer, I ever chased the cutting edge technology. Eye of the beholder with CGA 4 colors was my first step down the the path of blowing thousands of dollars on PC upgrades over two decades. Ultima 7, with the Guardian talking to me through my monitor, still haunts my dreams and keeps me ever hoping for a decent Ultima 8 and 9. From the 3DFX SLI VooDoo2s and Aureal to today's GPU driven DirectX games, the new and shiny pictures seem to keep me going. My PC gaming has slowed down with the market shift though, and although I have choice games that will ever be on PC, I have found myself in console gaming with a bit of portable gaming in my life. Back around the turn of the millenium (and long before fatherhood), I had fired off an email offering to help Ron with a little-known site called ConsoleGold. Little did I know it would be be a part of my life to this day. While I've seen my fair share of shovelware (thanks Ron!), I manage to try and find the fun in most games. Leaning towards sandbox and action titles, I've grown to love games for their potential to reach art. Console agnostic and excited for the progress of tomorrow, I fancy the latest and greatest, but still enjoy the good old classics ... as long as they've been revamped from their 8bit graphic roots.
Related Articles: Beyond the Page
Share
Tweet
Share
Submit