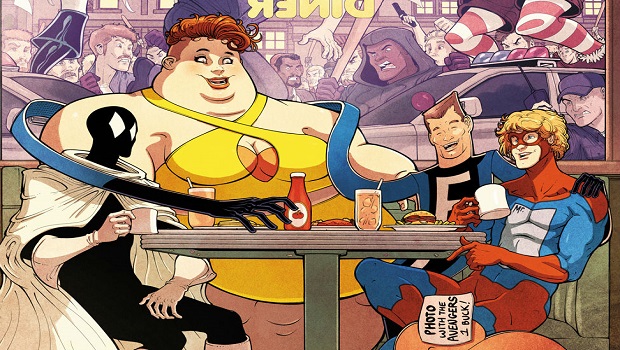 Ever since I started to regularly collect comics last year, I’ve been attracted to the zany and lighthearted ones. From Jughead to Howard the Duck, I really enjoy fun and hilarious romps that are self-aware in nature. After reading up on the origin of Squirrel Girl, I fell in love with the Great Lakes Avengers; a team of lovable losers, the group finally gets a monthly ongoing series thanks to writer Zac Gorman (Rick and Morty) and artist Will Robson (Star-Lord). If the first issue is anything to go by, it might just be the oddball sleeper hit with charm to boot.

Founded in the 80s, The Great Lakes Avengers was a team created due to the Avengers Initiative, which mandated a team of superheroes in every state (theirs being Wisconsin). While the plan didn’t really succeed, the group had a cult following and eventually a limited series over a decade ago. In the meantime, the team has had multiple name changes, mostly to highlight its absurdity in general. In the present day, we find one Flatman, a superhero looking remarkably like Mr. Fantastic, lazing off while some attorneys give him some wonderful news. Due to some weird events, ownership on the Avengers trademark had lapsed in the interim, thus placing him the sole owner of the Avengers name.

Using this as a bargaining chip, Flatman announces that The Great Lakes Avengers will once again be a team and tries to get the remaining members back together. With the aid of Big Bertha (a portly model with the ability to change her size) and Doorman (a teleporter tasked with bringing the dead to the afterlife) the group tries to relocate to a place where they’re needed: Detroit, Michigan. Absent from the reunion are Squirrel Girl, whose excuse for not joining is hilariously alluded to in a throwaway panel, and Mr. Immortal, who is in a bit of a sticky situation near the end of the issue.

The first issue of The Great Lakes Avengers has a tricky goal to accomplish; it has to establish why readers should care about a C-list team of superheroes from the 80s who have only made fleeting appearances ever since while maintaining each character’s backstory. Zac Gorman’s wit is displayed very masterfully as he portrays character development from the group’s most recent appearances. Big Bertha is no longer conscious of her weight problems (which was a driving conflict in her character arc during the previous miniseries), and Mr. Immortal’s brief appearance near the end was laugh-inducing and modernized the character’s personality. Doorman makes a darkly humorous joke about the sudden change in Detroit’s condition ala Deadpool, and there are enough callbacks to the group’s original appearances to satisfy long-time fans while keeping newer ones into the loop.

The supporting cast is also pretty colorful as well: while the villains remain a bit run-of-the-mill, we’re introduced to Good Boy, a prospective member of the group who is unfortunate enough to be on the receiving end of an attack. This plucky teen’s power is the ability to shapeshift into a werewolf, and while the debut is short-lived, I’m sure the character will be a wonderful replacement to Squirrel Girl (if she doesn’t decide to return.)

If there’s one thing that I loved about the comic, it’s the brightly colored art style that Will Robson provides. The standard cover alone is easy on the eyes, and contains a style that emphasizes some very stylized lines. The characters are expressive, and you can see a very stark difference between Flatman’s 2D and 3D forms (something that is humorously referenced within the issue).
Compared to some of the other Marvel Now titles, the characters look like something out of a Saturday morning cartoon from the 90s, which heightens the lighthearted tone of the whole affair.

The biggest challenge The Great Lakes Avengers might have in the future will be incorporating the Detroit setting into the comic. As someone who’s familiar with the city, I know it can be a beautiful place; I would love to see some interaction with cultural landmarks and stores (on a side note, there’s a wonderful comic shop that just opened up in the downtown area; having the team go there would be very meta).However, knowing Gorman’s Ann Arbor roots, I’m sure he’ll be able to explore more of this great city. Another obstacle the series will have to surmount would be the lack of fan-favorite Squirrel Girl, but as long as she can make a few cameos here and there, I’m sure they’ll get over it quickly. All in all, if you like a heavy dose of humor and self-awareness in your comics, The Great Lakes Avengers is a sure bet.

Elisha Deogracias is an aspiring accountant by day, freelance writer by night. Before writing for Gaming Trend, he had a small gig on the now defunct Examiner. When not being a third wheel with his best friends on dates or yearning for some closure on Pushing Daisies, he's busy catching up on shonen manga and wacky rhythm games. Mains R.O.B. in Smash. Still doesn't know if he's a kid or a squid.
Related Articles: Beyond the Page, The Great Lakes Avengers
Share
Tweet
Share
Submit