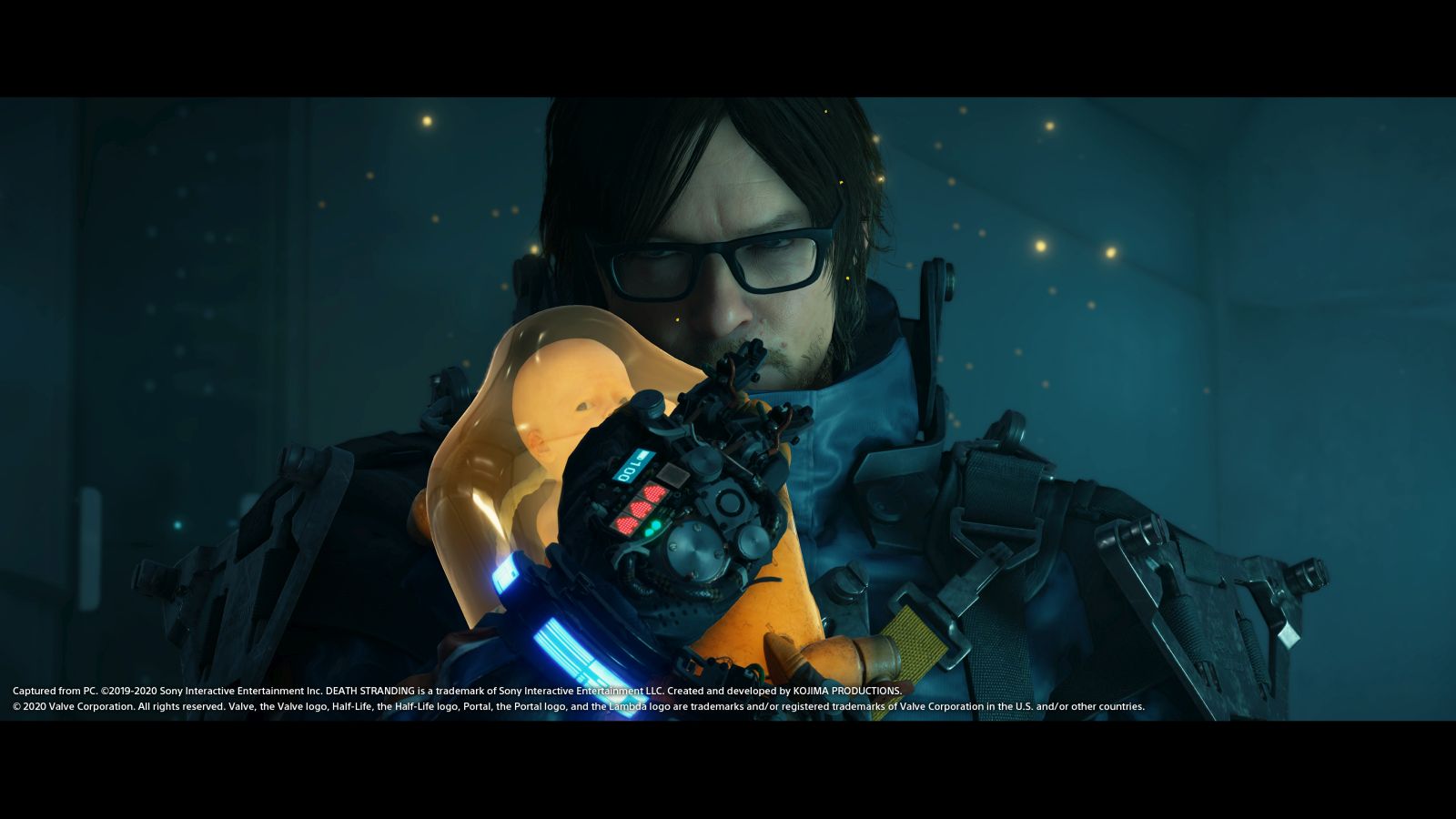 Death Stranding is…well, it’s hard to really say what this game is about. On the surface it’s about Sam Porter Bridges, a goods transporter who makes deliveries in an increasingly bizarre and dangerous world. An event called the Death Stranding has killed billions of people, releasing horrible monsters. Simple, right? But this is Kojima we are talking about, so throw in skull-faced hit squads, tar-like creatures, space whales and dolphins with tentacle-mouths, and much more craziness, and that’s not even talking about the BB units — babies put in fluid containers that can detect the monsters and communicate with the persons to which they are connected. It’s a strange world, but what else would you expect from the mind behind Metal Gear?

We reviewed Death Stranding on the PlayStation 4 (you can read Codi’s review here), as well as a look at the Art of Death Stranding from Insight Editions (my review here), and it’s not my intention to rehash those efforts as they summed up how fantastic this bizarre adventure is. Instead, I’m going to focus on the technicals of the PC version. No bones about it, the PS4 version (especially on the PlayStation 4 Pro) was absolutely gorgeous, but with the added power of a PC driving it, the PC version is the ultimate edition. As you’d expect, it means better framerate, but that’s just the beginning. 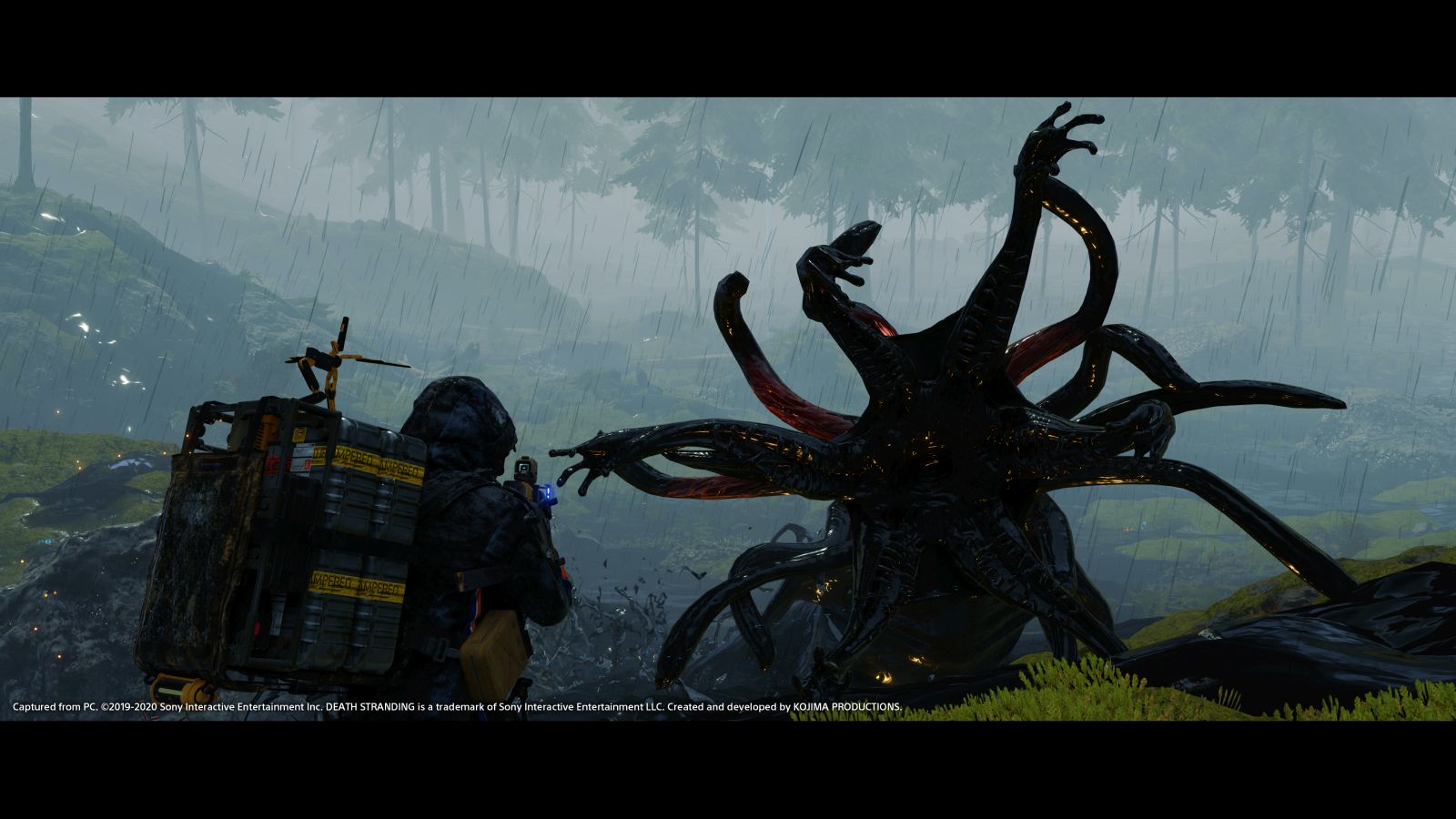 You are gonna see a lot of these guys.

The first and most significant upgrade to this version is NVIDIA’s DLSS 2.0 technology. If you are unfamiliar with DLSS, it’s NVIDIA’s impressive AI-driven technology that can deliver improved framerates through deep learning super sampling. The second generation of this tech is capable of delivering images that are somehow even cleaner than the original image. It’s absolutely revolutionary, and it’s baked directly into Death Stranding. The way it works is through training a neural network by feeding it thousands of high resolution images at a rate of 64 samples per pixel on the screen. The neural network then uses those images, which are captured at lower resolutions, to construct a new image at a much higher resolution, feeding the results to your screen. Consequently, this can provide 4K images at high framerate on a machine that would otherwise be unable to deliver those resolutions and framerates at their native settings. Truthfully, I wouldn’t believe it was possible to do this as effectively and efficiently as it does if I didn’t see it myself.

At 1440p on a 1080 Ti, I saw a framerate average of roughly 120 fps while outside, and making out at 144 to match my monitor while inside. Dropping the resolution to 1080p predictably brought the framerate up to 144 and held there. During cutscenes and moments when the player is not in control (e.g. conversations, using terminals, etc.), the game drops to 60fps and locks in to ensure that there is no variance in framerate. On a 2080 Ti or 2080 Super, as you would expect from those cards, you are going to see framerates that’ll likely exceed the capacity your monitor can deliver. My OriginPC EVO 15-S has a 240Hz screen, and sure enough, I was consistently hitting 240fps. Is 240fps or even 144fps necessary? Arguably not, but damn it looks incredibly smooth. But what about people without superpowered cards? Well, it turns out you can run this game and have it look gorgeous on a potato-quality PC thanks to DLSS 2.0. In fact, you can easily hit above 60fps at 1080p with an entry level GeForce 1060 or Radeon RX590. It’s impressive on a technical level, the results even moreso. 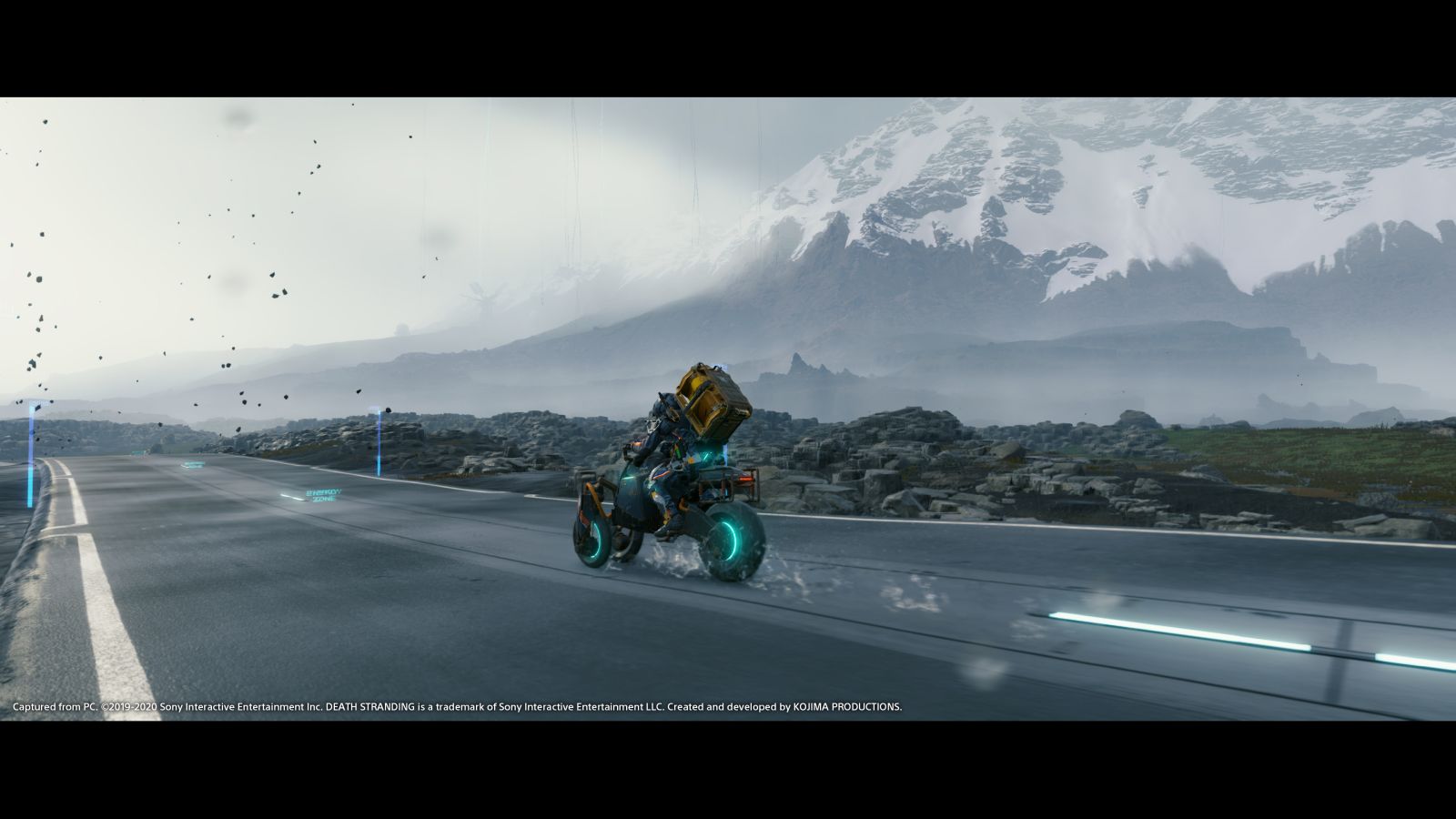 Thankfully you won’t have to walk everywhere you go.

Beyond the graphical improvements, efforts were made to embrace the native keyboard and mouse inputs of the PC. Delivering lost cargo no longer requires 20 clicks to select everything — you can drag your mouse across the whole list and deliver them all. Similarly, just keeping your balance feels more natural, using the left and right mouse buttons to make slight adjustments to the weight distribution on your back. Hand to hand combat feels a little clunky, but before long you’ll have firearms and that feels just right. The game does, of course, support a controller, but it doesn’t feel entirely necessary — a welcome improvement.

There is one other component of the PC version that came as a complete surprise — a Half-Life crossover. I don’t want to ruin the surprise, obviously, but suffice it to say that Sam’s backpack fits weighted companion cubes perfectly. Completing these optional side missions will yield some fresh themed equipment for Sam (including a headcrab hat), so they are worth tackling. Knowing that we won’t see Half-Life 3 anytime soon, it’s also a chance at a little more information on Valve’s expanded universe. 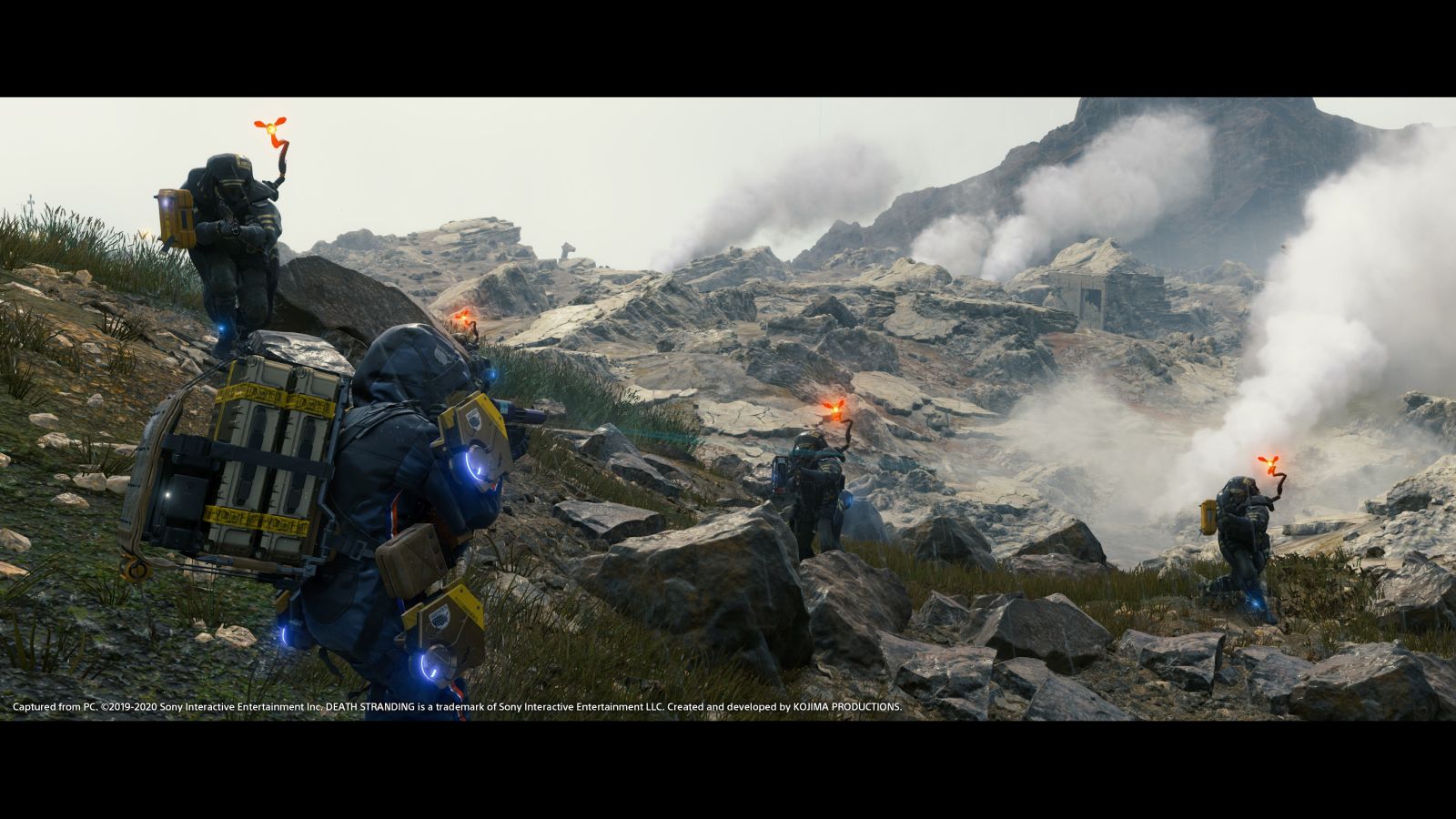 You aren’t alone in this broken world of Death Stranding.

Like Codi’s review of the game, I found myself surprised by just how much this strange game about delivering goods from one end of the country to the other could be simultaneously thrilling, frustrating, peaceful, and somehow hopeful. It reminds us that we are all connected, but that real monsters also exist. It reminds us that friends and family are the most important things of all. It reminds us that Kojima and his team are the strangest cats on the block, but that they may be some of the best storytellers around.

You can start preloading Death Stranding by the time you read this, and your adventure can begin on PC on July 14th.

Ron Burke is the Editor in Chief for Gaming Trend. Currently living in Fort Worth, Texas, Ron is an old-school gamer who enjoys CRPGs, action/adventure, platformers, music games, and has recently gotten into tabletop gaming. Ron is also a fourth degree black belt, with a Master's rank in Matsumura Seito Shōrin-ryū, Moo Duk Kwan Tang Soo Do, Universal Tang Soo Do Alliance, and International Tang Soo Do Federation. He also holds ranks in several other styles in his search to be a well-rounded fighter. Ron has been married to Gaming Trend Editor, Laura Burke, for 21 years. They have three dogs - Pazuzu (Irish Terrier), Atë, and Calliope (both Australian Kelpie/Pit Bull mixes).
Related Articles: Death Stranding
Share
Tweet
Share
Submit