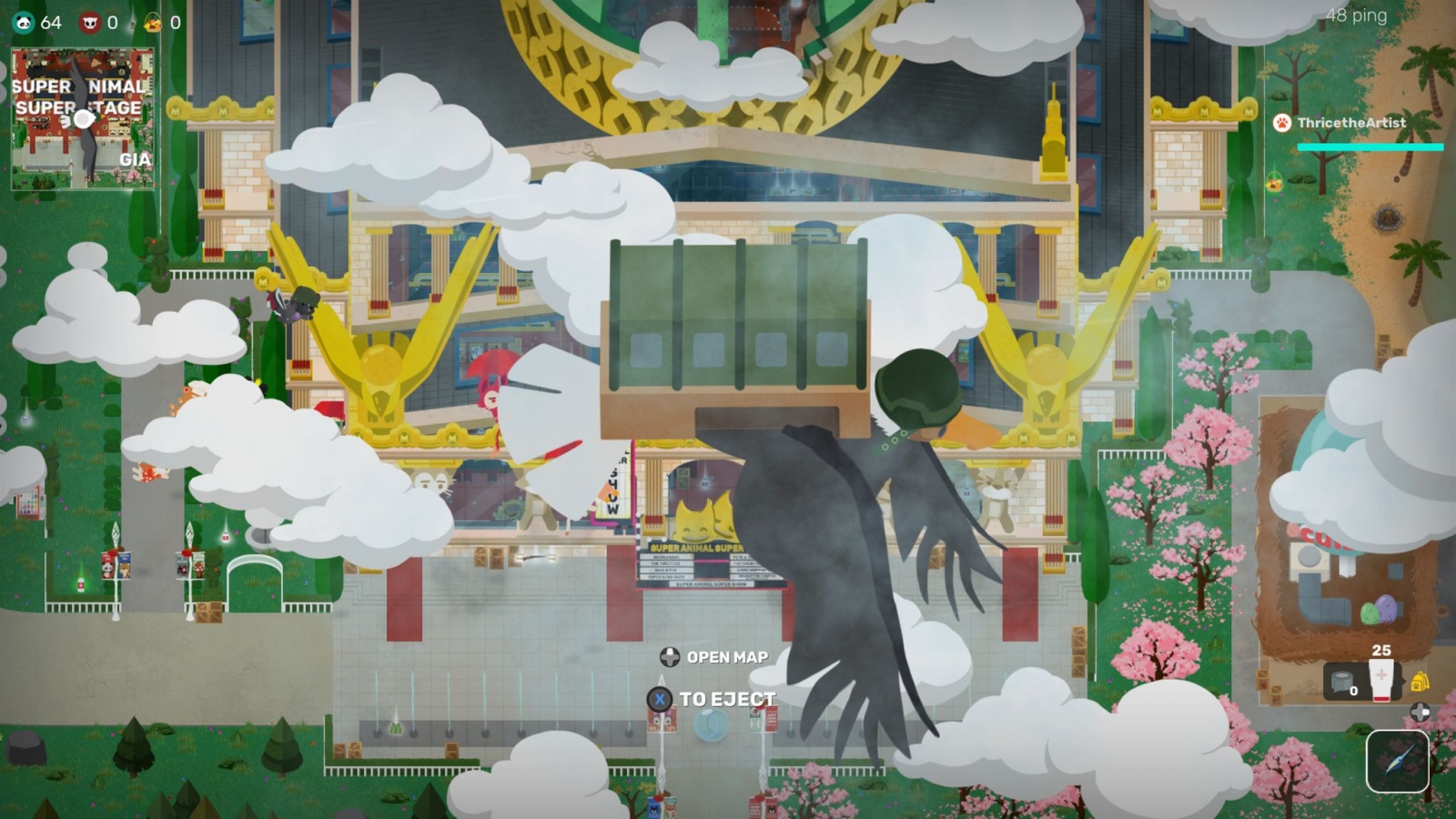 I’ve never been much for battle royale games, mostly because by the time I get around to learning the ropes to whatever the latest trend is I’m already so far behind other players that I can’t find the motivation to continue. Enter Super Animal Royale, a new addition to the free to play battle royale genre. Sure, it may not be as in-depth as Fortnite or other battle royales, but I found myself having an incredible amount of fun since I felt none of the stress that normally stems with playing other battle royales.

Let’s be clear here – this is not a review of Super Animal Royale, as the game is still in the preview stage and can, and most likely will, experience a large amount of changes along the way to the final product. This is just my thoughts after playing the game for 50 or so rounds and messing around with many of the customization and research lab options.

Super Animal Royale is similar to other battle royale games as it thrusts you into a world filled with 64 other players where you must fight to survive; one player will eventually become the last man – ahem, animal – standing. You have one life per match, but once you’ve been defeated you are given the option to either stay and spectate, or leave the match. Early on I stayed on as a spectator to gain a better understanding of the game, but later I quickly found myself ditching games as soon as I died so I could hop into another match. 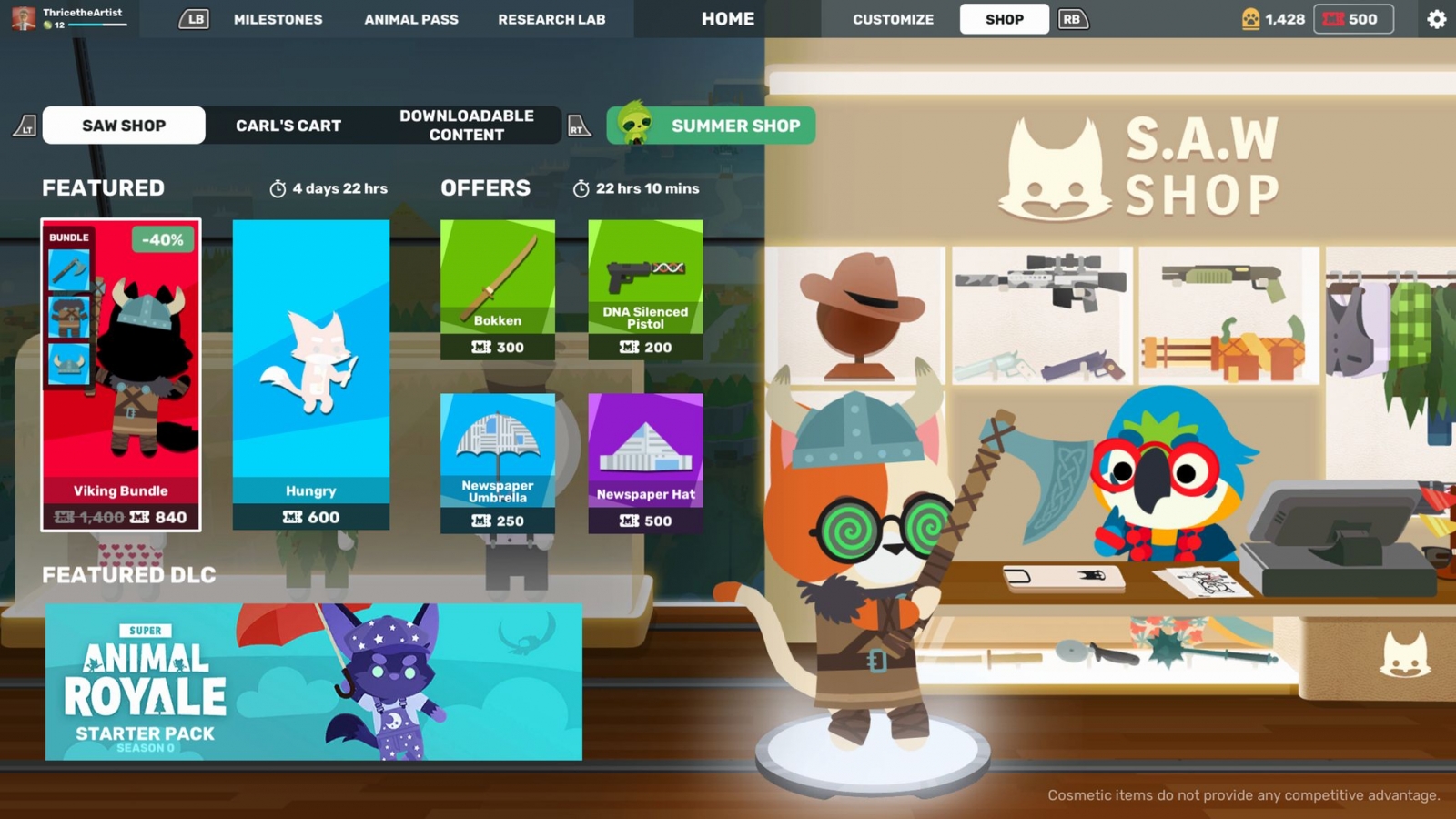 When you boot up the game you’ll begin in a lobby where you can add up to three friends. Thankfully this game is cross play, so you can invite friends from either console or PC to join you. You can also create an account which will then allow your progress to be transferred between platforms. Thankfully creating an account is not required to play, but is necessary if you think you’ll eventually want to play your character on another platform. There are three modes to choose from: solo, duo, and squads, each with their own game mode, preventing solo players from going up against squads, etc. 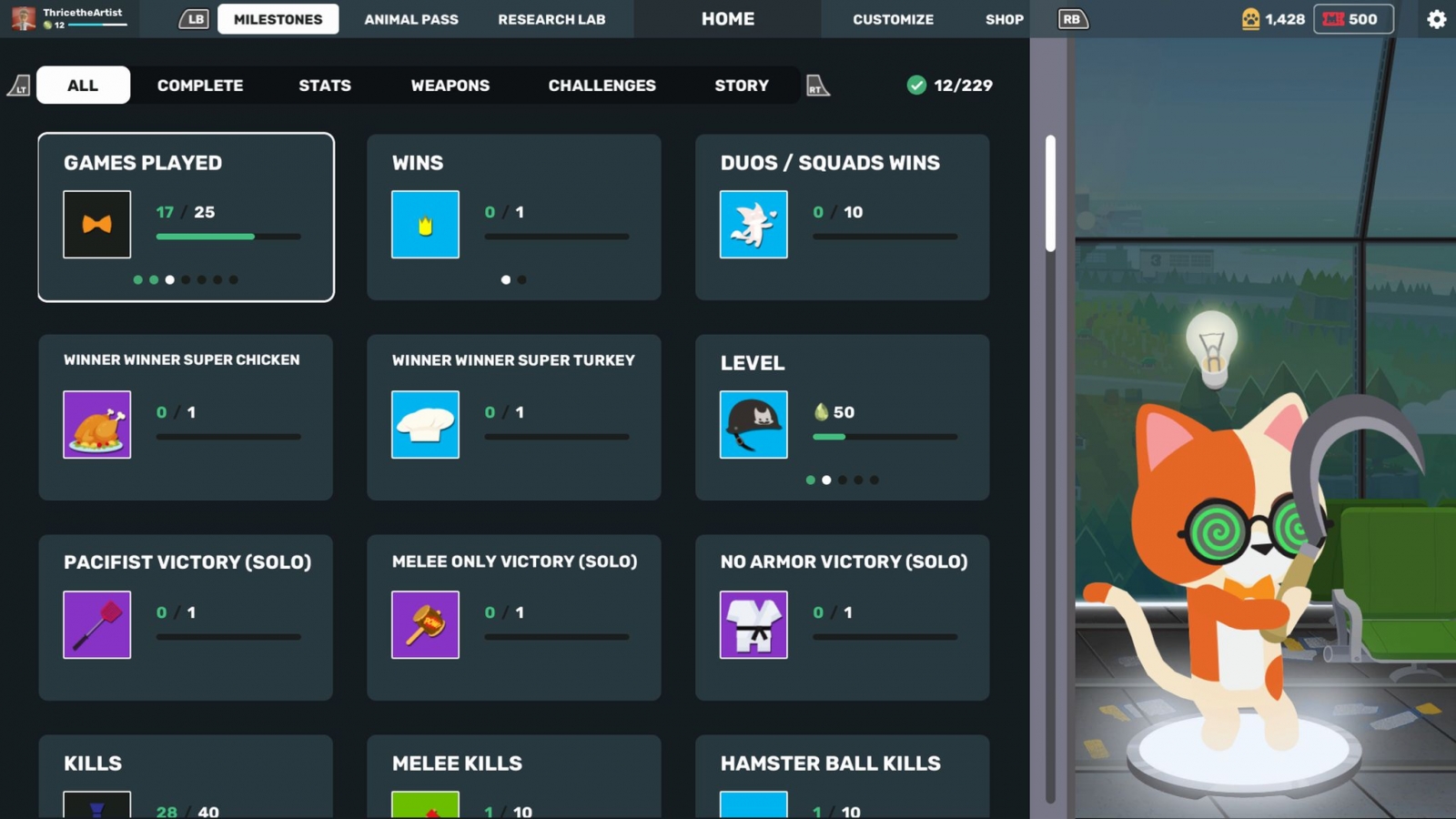 The lobby also allows you to hop between a series of different areas including your milestone goals and accomplishments, animal pass details, the research lab, customization options, and the various available shops. The milestones tab shows your current stats and goals, and allows you to earn cosmetic items for goals you have accomplished. The animal pass details an optional pass, updating quarterly, which can be purchased using real currency and will then unlock various cosmetic items as you gain EXP. The research lab allows you to create new breeds of playable animals using DNA and super serums collected during matches. The customize tab allows you to choose from a huge selection of props, weapons, skins, and accessories for your character as well as what breed of animal you would like to play as. Although your character options are limited to a fox, bear, skullcat, and tiger at first, the roster will quickly expand as you play. Finally, the shops allow you to purchase weapons, skins, bundles, and accessories using Carl’s coins, real money, fruit baskets, and more depending on the shop. 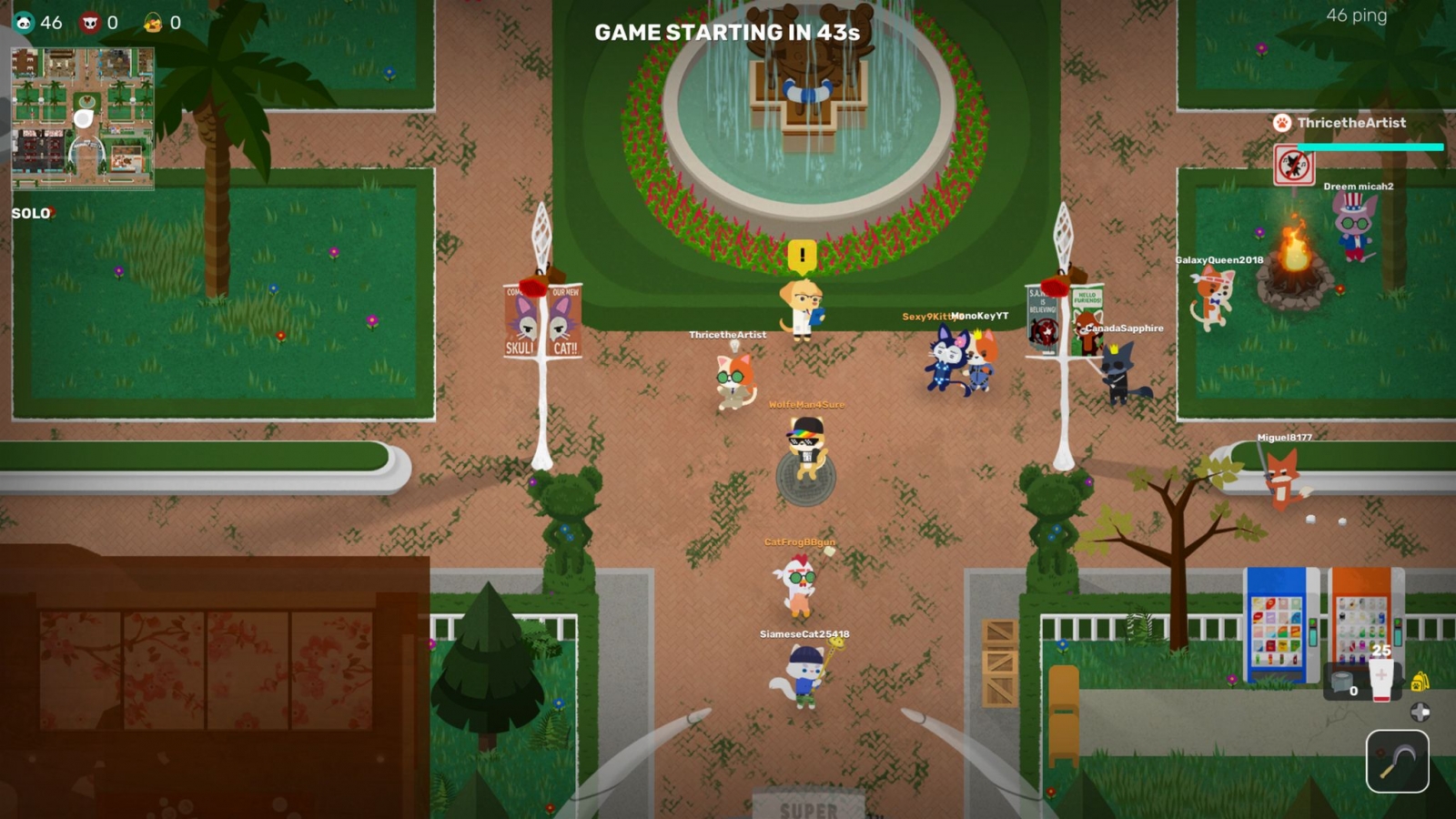 Between matches players are thrust into a lively hub world where you can interact with other players while waiting for the next match to start. You can attack each other with melee weapons here, but you can’t kill another player. There are various areas of interest on the hub map, including meeting a scientist who gives you hints as to where you can find his secret lab, and even an art gallery where you can browse what looks to be fan art. Once you’ve gotten tired of exploring you can simply pick a spot to show off your dance moves and see how many other players you can get to join your dance party.

Once a match begins you are picked up by a duck with a cargo box on top of it and given the option to jump out of the cargo box whenever you want. You can open the map to view the best place to drop or simply jump whenever you feel like it. After jumping you will begin your descent using an umbrella and can maneuver to areas with the best loot. You can choose to quickly fall if you’d prefer, although hitting the ground during a quick fall will stun your character for a moment and put you in harm’s way. You must be strategic about where you jump and land, as many times you may find yourself in a race to drop on top of a weapon before another player, as all matches start players with only a melee weapon and survival is dependent on who grabs a weapon first. All weapons, ammo, and accessories must be scavenged from the battle field or from fallen players.

While players begin with only a melee weapon, during matches you can collect and hold up to two guns and a throwing item. Guns come with a little bit of ammo, but you must find the rest of your ammo on the battlefield. There are a nice variety of weapons available including pistols, SMG, AK, shotguns, sniper rifles, and more. Throwing weapons consist of bananas, skunk gas, and grenades, but I found it incredibly difficult to actually hurt anybody with any of the three throwing items. Although, in a pinch, it may at least scare a player off long enough to heal or repair your armor.

Players can wear one set of armor at a time, and armor varies in protection but is always labeled as level 1, level 2, or level 3. There are also various means of crossing the battlefield quickly, as both a hamster wheel and an Emu are common to stumble across and can be used by anybody. Hamster wheels are great fun to chase other players with and can instantly kill another player if you run over them – careful though, they can be broken if shot too many times. 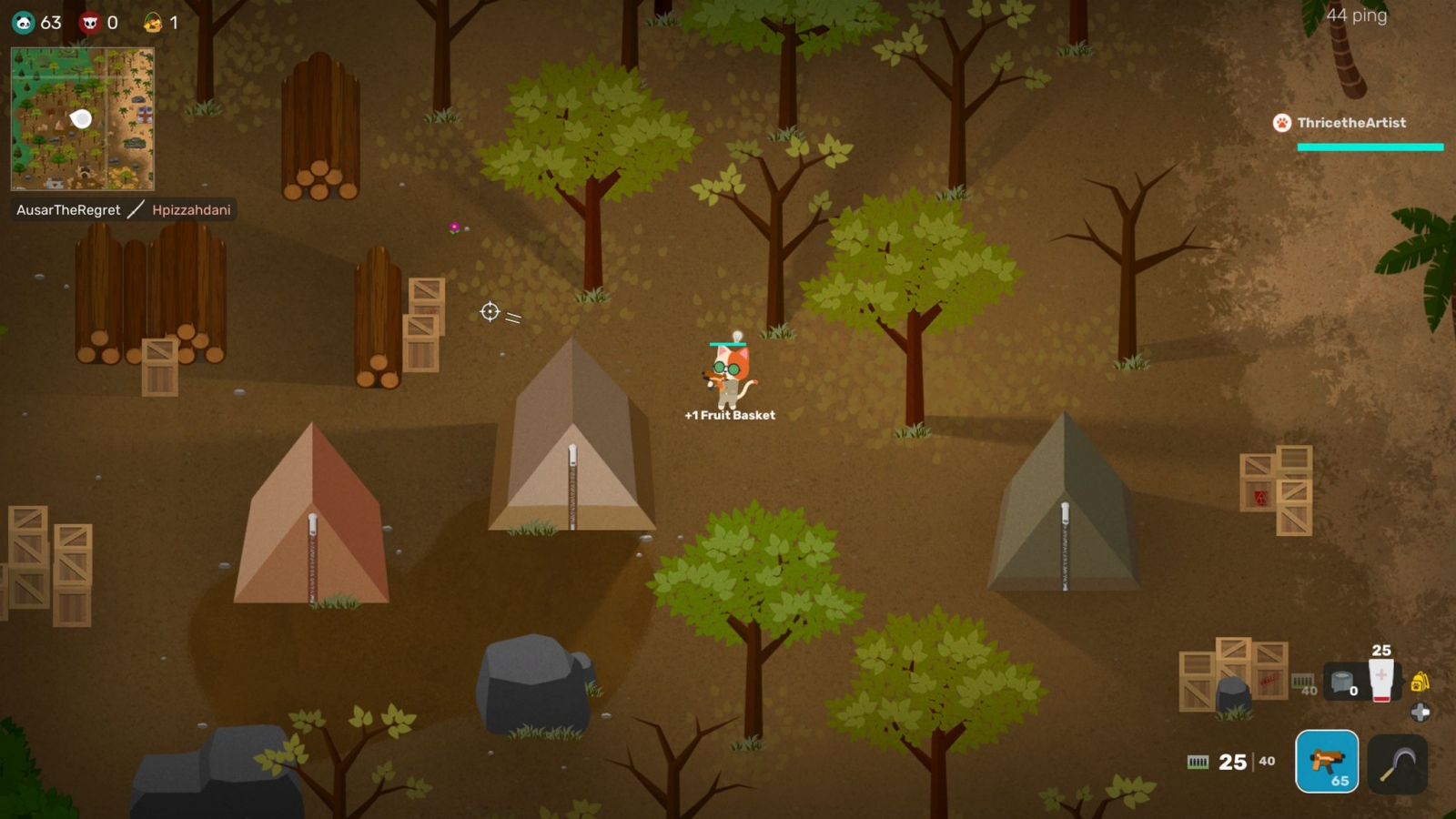 Camp fires are scattered throughout and standing near one will slowly restore your health, but will leave you vulnerable to attack. Additionally there are health and tape pickups everywhere, which can be held in reserve and used to regain your health bar or to fix your damaged armor between fights.

Maps are quite large, but gradually shrink as the match progresses and the number of players remaining dwindles. Skunk gas will slowly surround you, making anything outside of the safe circle damaging to stand in, forcing players to get closer together as time goes on. This is nothing new to battle royale games, but I certainly appreciated the addition here as the maps are quite large and you could often go a long time without running into another player near the beginning of matches, but by the last few standing it becomes an all out war in a tight space. 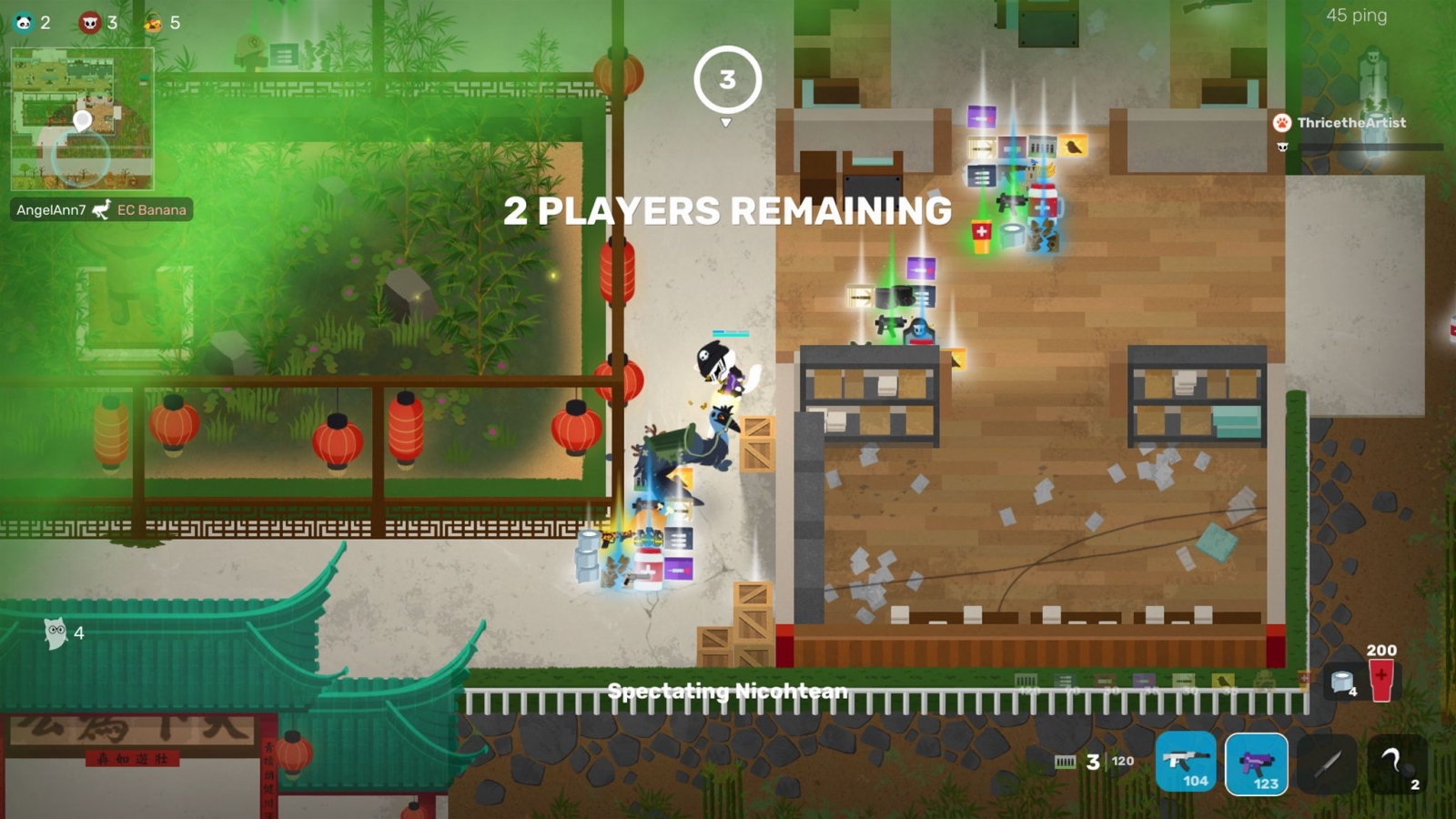 Each match awards you EXP based on kills and how long you survive. You’ll also gain fruit baskets, Carl coins, DNA, and super serums. Fruit baskets are a special currency used during random game events and can be used to purchase special cosmetic items from the summer store; Carl coins serve as the in-game currency and can buy a number of cosmetic items from the shop, while DNA and super serums are used in the research lab to create new playable animals or variations of already unlocked animals.

The research lab is more fleshed out than I expected, with over 350 different playable characters able to be created, each featuring a unique look and style. The higher your in-game level, the higher level DNA that is awarded to you after matches, essentially ensuring that you’ll always have a new animal or variation to create. If there is a specific animal you want to create, but are having a hard time collecting the correct DNA, then there are DNA magnets which can be used to help your character collect a specific animal’s DNA for three matches. 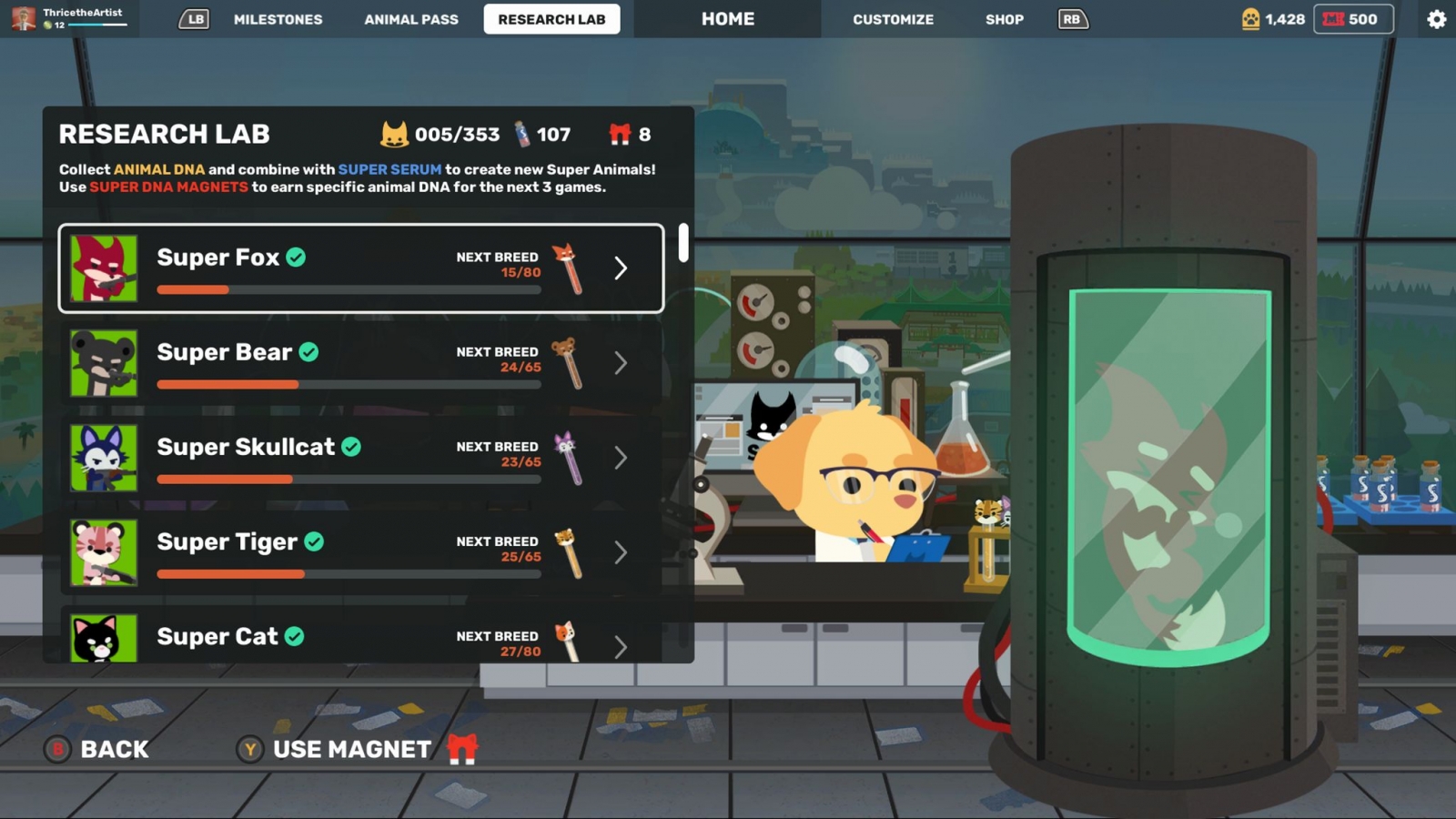 There are other ways to earn EXP, including completing various super challenges which change daily or weekly. These may ask you to pick up legendary weapons, get kills with a specific weapon, roll a hamster ball a specific amount of meters, or even make enemies slip on banana peels. I enjoyed these extra challenges and found myself changing my play style in hopes of completing them for the large EXP boosts they give.

Matches are quick and chaotic, with nearly half the players seemingly dead within a minute or two. A counter in the top left tells you how many players are left and who is killing who. As the number of players dwindles, the game slows down, becoming more a cat and mouse hunt for the remaining enemies. I found myself having tons of fun whether I survived until the end or died near the beginning of a fight. It is incredibly simple to hop out of a game and back into a new game, causing death to be nothing more than a minor setback between matches. 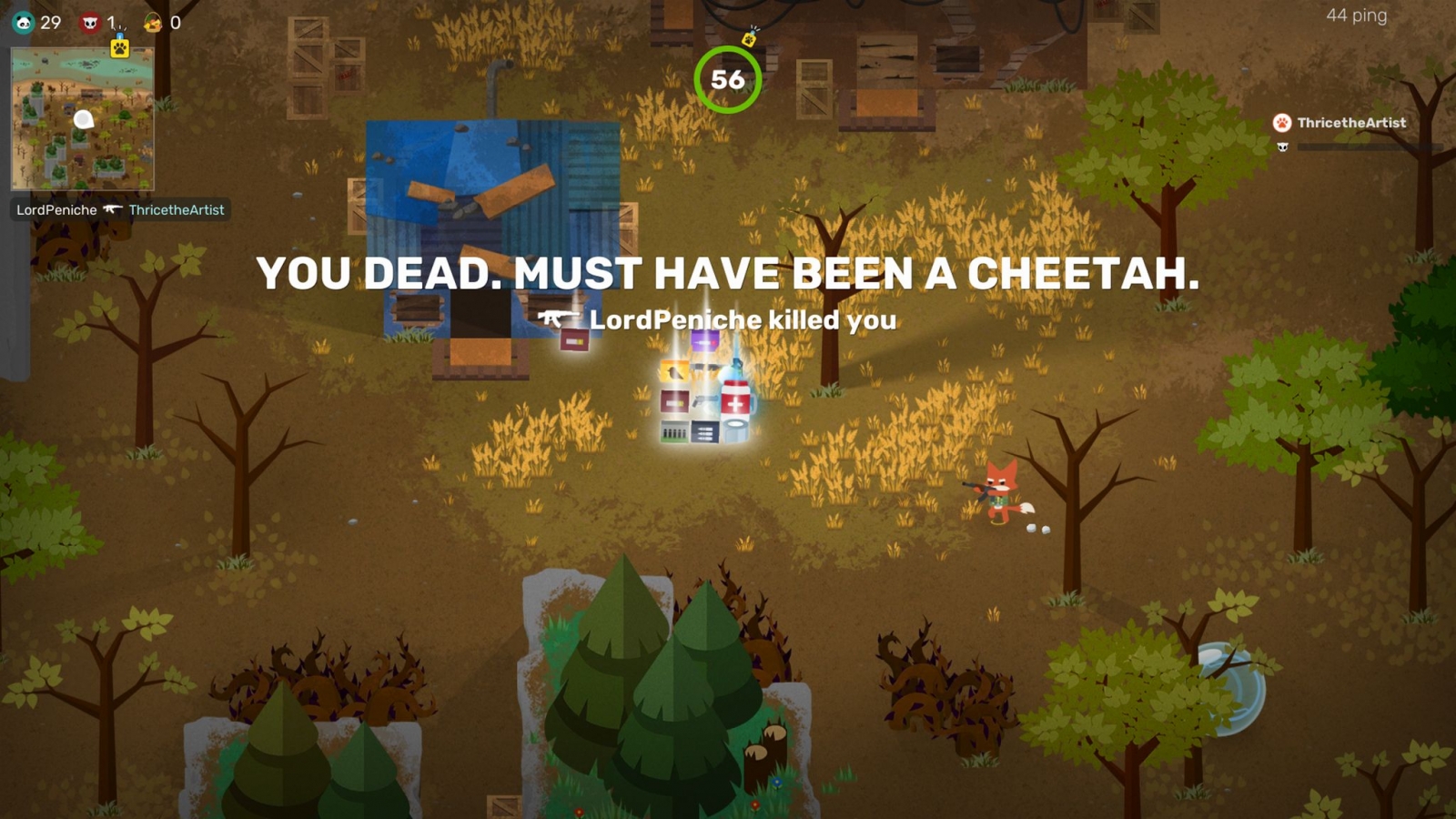 I’d highly recommend checking out the free-to-play game preview available now on XBOX One, Switch, PS4, and PC. You may be surprised at just how much fun you’ll have creating adorable animals and then watching them blow up everything in sight.

Richard Allen is a freelance writer and contributing editor for various publications. When not writing for Gaming Trend you can find him covering theatre for Broadway World, movies and TV for Fandomize, or working on original stories. An avid retro gamer, he is overly obsessed with Dragon's Lair. Chat with him via @thricetheartist on Twitter and @richardallenwrites on Facebook and Instagram.
Related Articles: Super Animal Royale
Share
Tweet
Share
Submit