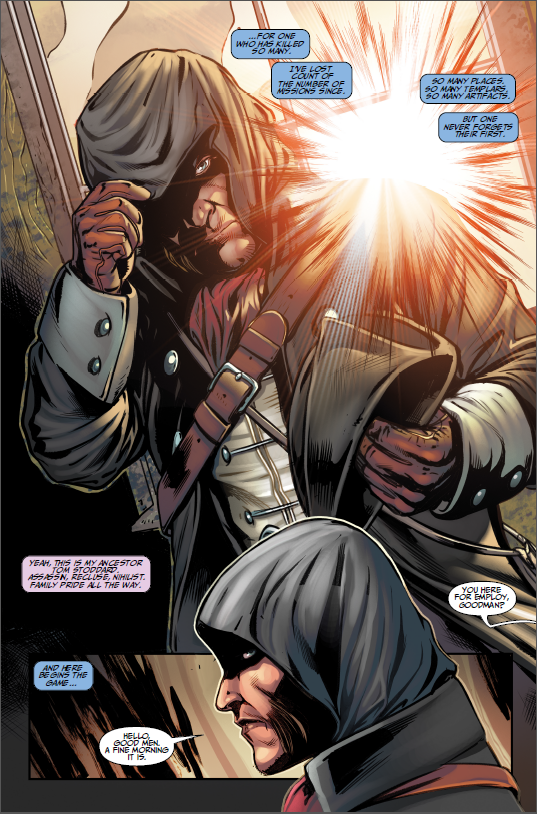 Part two of the Assassin’s Creed comic series jumps us right to our hero Char’s maiden dive inside the ancestral mind of Tom Stoddard, a member of the Assassin’s Brotherhood on a mission to retrieve an ancient artifact that could change the course of their struggle against the Templar Order.

Where issue one of the comic series focused its attention on Charlotte’s (Char) recruitment and introduction to the Animus system, issue two spends the majority of its time in the past as her alter-ego Stoddard pursues his objective in the midst of the Salem Witch Trials and the vicious zealotry of the puritan populace. While we do occasionally break from the intrigue of Charlotte’s ancestor to see how her current mind and body are coping with the Animus device, most of Charlotte’s present self is reflected in small asides and quips she makes about Stoddard’s behavior within the dive itself. Who Charlotte and Stoddard are as people are radically different, and her Assassin Cell overseers are tasked with deciding if this conflict is worth the risk to her safety and the mission she’s undertaken.

The quality of the comic itself remains consistent and beautifully composed. A great deal of attention is placed on getting the setting right and bringing across the historical atmosphere the Assassin’s Creed series has always taken a great deal of pride in.  The art and color composition of this book’s frames ranges from skillful to downright cinematic, and in combination with the dialogue, artists and writers Del Col, McCreery, Edwards, and Nunes are doing a hell of a job covering so much content so early in this story.

Although this issue does give us plenty of background and encyclopedic appendixes to cue you into the goings on, even down to the setting of the Salem Witch trials for those of us not familiar, at only five parts it’s clear you will need to read all of this limited run to really form an opinion on how much you like Titan Comics take on the Assassin’s Creed universe.

This is even more apparent when it comes to issue #3.

At this point it seems safe to believe the artistic expectations are locked in, and the writers have captured the voice of these characters and this story as a whole.

As we return to Stoddard’s mission and the increasingly dangerous opposition that is rising to stop him, I found myself both impressed and nervous at the speed in which this story was being told, and wondering if five issues was really going to be enough to tell it.  Both the ruthlessly driven Tom and his gamer descendant Charolette’s plots only seem to be growing larger, with new threats, and challenges arising every few frames.

Back in history, Tom discovers an even deeper secret locked away within the surprises experienced last issue, while Char’s unconscious body appears to be in increasing danger as her Assassin Cell overseers’ infighting grows deadly. At one point, I was so taken aback at the turn of events I found myself gasping aloud as I scrolled through the digital pages. That’s not to say you will, (I really get into good stories) but it was enough to let me know I was along for the ride in a totally committed way.

The events of Assassin’s Creed Issue #3 in particular were a huge selling point for me. Since we should be nearing the summit of the rising action this shouldn’t be much of a surprise narratively speaking, but having a good story and telling a good story can be vastly different things, especially in a comic book miniseries which have so many factors that can derail the final product.

In either case it’s been a good ride, complete with all the things an Assassin’s Creed fan should expect. (Except perhaps a few game-breaking bugs…) Stick with us as we come to the conclusion soon and see what it all amounts to!