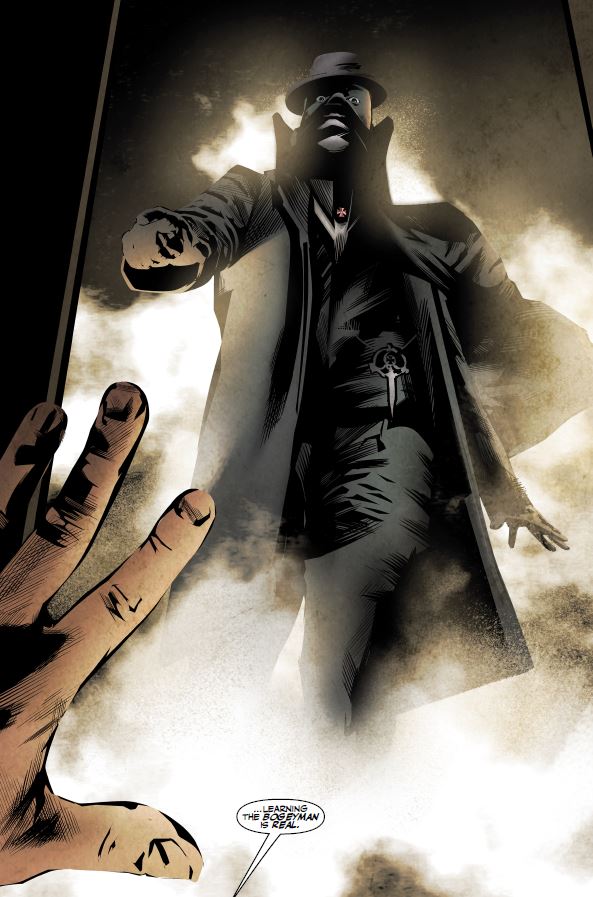 Last year, Titan comics introduced us to the world of Charlotte De La Cruz and her violent induction into the shadowy war between the Assassin Brotherhood and the Templar Order. As her adventure continues in the modern day, another story has emerged, revealing to us not only a tale from the past, but from the opposing perspective.

Assassin’s Creed: Templars is a rare tale about the bloody intrigue that exists within the ranks of the Assassin Brotherhood’s ancestral adversary. Here, the lines between duty, greed, and honor blur easily, and no one can be trusted beyond their own self interests.

Standing at the place where these diverging motivations intersect is the enigmatic figure known as the Black Cross, a Templar agent answering only to the highest authority and wielding skills more traditionally associated with his Assassin rivals. It is the Black Cross’s duty to make certain the greater will of the Templar Order is enforced, to weed out the corruption that legitimizes the Assassin Brotherhood’s claims of their villainy, and be his Order’s bloodied fist of virtue.

When a young Templar acolyte’s mission to prove his worth goes immediately awry, he and the Black Cross must make a tenuous alliance to see his duty is completed without fail or discovery.

Unlike Titan’s other Assassin’s Creed series, Assassins, (which is written and formatted to mirror the video game series) Templars takes place entirely in the past, telling the story of the individuals who actually experienced these events, as opposed to their ancestors reliving them via a genetic link. This gives the comic a great deal more cohesion and focus, allowing the reader a stronger link to the characters and events. Wordless and detailed panels can be spent strictly to convey emotions or drive home a dramatic scene, instead of filling up every page with two plots worth of tentatively connected details.

The artwork and  layout of Templars is stylized, but in an extremely accessible way. The transitions between vivid and washed out colors and bordering really convey a sense of atmosphere. Nights don’t only look dark, but feel that way, and the same can see said about other environments, situations,  and conditions.

Some of the larger frames and splash pages literally look like 1920’s marque portraits and are poster worth in their own right.

These books’ strong dialogue is a perfect partner for its paneling and art, and gives every scene and encounter a memorable weight. Very little time is wasted on vacuous exchanges, and this contributes to the comic’s stern but adventurous tone. These characters are written believably and relatably, not like they’re playing a part, which for a number of reasons can be hard for a team or pair of creators to regularly pull off.

So, how is the actual tale itself so far?

Well, in the beginning I was concerned that the Black Cross character was going to bother me because it seemed pretty on the nose. I mean, a black character, named the black anything, immediately walks the line of being a patronizing tokenization. But as I continued through the book, I got the feeling that there was going to be enough substance behind the title (and by “title” I mean the role of the Black Cross itself) to make me disregard my worries.

The first issue focuses primarily on familiarizing us with the protagonists Black Cross and Darius Gift, and what functions they serve in this dangerous world. Details are scarce, but that isn’t a problem because Templars focuses on these characters’ sense of purpose. Both of them are hardly as concerned with what they are doing as to why they are doing them, and the gap in that way of thinking, especially when it involves taking a number of lives, seems like it will be a theme.

Issue number two of Assassin’s Creed: Templars addresses the immediate consequences of the previous entry’s literal cliffhanger, and our first meeting between our two biggest characters.

There is not as much action in this issue as the first, but that’s a good thing, since it focuses more on setting up will be the plot of the remaining books. Black Cross’s mission seems to have several layers more than what we as the readers are currently aware of. Although his past is hinted at in a rather deliberate way, the part it will play in the future, if any, is intriguing.

Darius, expectedly, seems to be struggling with his own mission, and instead of finding a true ally in Black Cross it turns out he may have only built an obstruction. Even at this early point, it seems like he is already doing all he can to avoid becoming a foil, with his largest accomplishment not being killed by Black Cross himself for his schoolboy errors.

This says interesting things about the rest of the story, as Darius shared almost equal time with Black Cross in the first book, but only has one scene here. Granted, it was several pages long and gave us some great exposition, but it was still a small portion of the amount of in-story time that actually elapsed.

From the moment I began Assassin’s Creed: Templars it thoroughly spoke to my tastes as a comic reader. The paneling, art style, dialogue, and pacing were all reminiscent of some of my favorite comic book works and really made the story feel emotional and cinematic. I am extremely excited to see what happens next and if the series can keep up it’s impressive momentum.