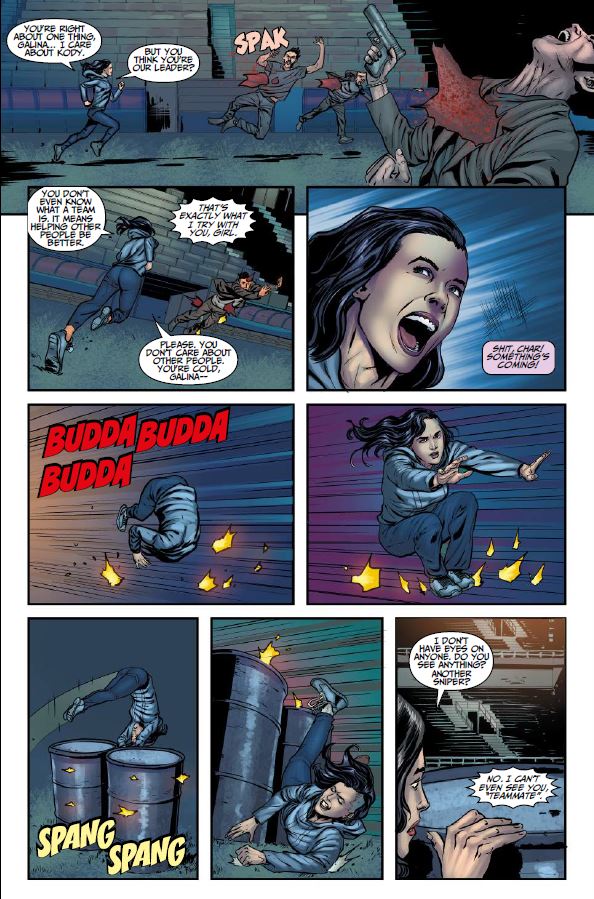 As we rocket toward the climax of the Assassin’s Creed: Assassins second five part arc, our heroine, Charlotte De La Cruz, is trying to correct a very bad situation of her own making.

Since this portion of the story began, Char’ has been more and more vocal with her partners about her misgivings. She doesn’t agree with or trust the methods they employ to complete their missions, and has gone as far as accusing them of being as bad as the forces they’re trying to stop. However, after deciding to go about their current mission in her own way, Char has exposed the rest of her Assassin cell to their pursuers and placed them all in mortal danger.

Now at the largest disadvantage they’ve faced since recently joining forces, the surviving members of Charlotte’s team have to either find a way to work together or face their separate fates.

Assassin’s Creed: Assassins issue# 9 is the fourth entry in this volume of the story, and begins with reluctant partners Charlotte and Galina embarking on a hastily planned rescue operation. Still injured from the events in volume one, the arrogant but more experienced Galina is forced to allow the increasingly cocky Char’ to take the lead while supporting her from afar.

The panels that begin this issue are some my favorite yet, and finally address some of my more private gripes with how this series has gone about presenting its action. The movements of the characters are cleverly illustrated, and flow from one frame to another wonderfully. The sense of Char’s increasing capabilities as she’s exposed to more and more of the Animus’ bleed effect (where the skills of her ancestors are passed along to her through sharing their memories) are represented the best they’ve ever been, and this makes it easy to imagine her performing the parkour-inspired gymnastics the video games are famous for.

When this extended action sequence has run its course, the resulting bout of intrigue between the parties involved leads back to the world of Char’s most recent Animus target, her Ican ancestor Quila, who, when we last saw her, was in her own spot of lethal trouble.

After discovering a murderous plot surrounding the current emperor, Quila is sentenced to execution under the pretext of being sacrificed to the Gods when none of her potential allies believe her warnings; including her former husband. Captured and carted off to the ceremonial killing ground along with an unwanted companion, the ever-drunken Spaniard Don Gonzalo Pardo, Quila is at her wits end, and can only hope someone among the numerous people she’s begged for help will finally come to her aid.

Quila’s big adventure moments seem to have already taken place in the previous two issues, and at this point her scenes feel primarily as though they exist only to find out what additional knowledge she, and by extension, Charlotte, can glean via their Animus connection. While still effectively told, this makes Quila’s part in the larger story mostly predictable, and although this issue concludes with a cliffhanger regarding her ultimate fate, we also know by the entire issue’s worth of events, that the even bigger threat remains on Charlotte’s end. If Quila dies at the hands of her own ineffectual efforts to protect the people around her, then Char’s desperate gamble in the future will only lead to a repeat of history.

Issue# 10 dedicates itself to answering questions concerning Quila’s destiny, and what Charlotte can do with the knowledge she’s gained from her ancestor’s life.

In a surprising turn of events, Quila’s part in this adventure winds up having a couple more layers than you’d expect, and in the aftermath of her final rebellious act, her descendant Charlotte is able to use these new memories to double-down on her previous gambit.

Attempting to use not only her new information but also her life as bait, Charlotte attempts to make amends to her fellow Assassins and wounded conscience in one fell swoop. The results lead to a series of surprises for all parties involved, friend and foe alike, and lead us to the doorstep of something I’ve been wanting to know about more and more as this story’s gone on–Charlotte De La Cruz’s origins.

As issue# 10 of Assassin’s Creed: Assassins came to a close, my impressions were mixed. Although some things in these two issues were done brilliantly, others left a lot to be desired and contained elements I’ve found troublesome before.

Issue# 9 began with and contained a number of great action panels and illustrations, but this level of detail is inconsistent and largely non-present in issue# 10, despite having conflicts just as long and elaborate. You can see the attempts at carrying the same technique between both issues, but it’s just not executed as well.

This concern resonates with my previous complaints about Assassin’s Creed: Assassins lack of consistent onomatopoeia in issues# 7 and issue# 8, making some scenes feel mute and hollow, while others are action packed and fully immersive. For a little while, I thought that this might be an artistic choice, where the creators wanted to limit the amount of “sounds” in the book because it distracted from the other art. But after a few reads and finding some of the panelling choices confusing in their own right, often missing establishing frames for reference and similar quirks, I now think this might actually be a problem.

I still enjoied these two issues, and they are among my favorites of the ten we’ve gotten so far. But, I need to reflect on whether or not I think these potential stylistic choices or litany of errors are to my taste going forward with the series.

More on that in my review of Assassin’s Creed: Assassins comics 6-10, coming right here on GamingTrend!