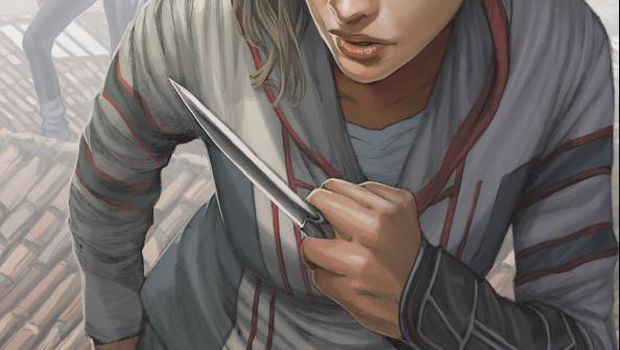 Taking off shortly after the events of Assassin’s Creed: Assassins issue number five, the sixth opens with our heroine, Charlotte ‘Char’ De La Cruz, becoming a more reluctant member of the team as the full weight of her new obligations begin to weigh on her. In addition to the guilt of taking her first life, Char’s immediately faced with the reality that, regardless of their intentions, she has thrown in with a group of clandestine killers whose motivations are still largely unknown to her.

Now on the run following the events of last issue, and with the numbers of her newly adoptive Assassin cell wilted, Char is beginning to realize that the life she once had is gone and the new one she has chosen may not be something she wants.In part to escape the turmoil these struggles have burdened her with, and also to find out more about her own past and its connection to the Assassin legacy, Char takes it upon herself to investigate some questions she had after her first dive into the Animus.

This brings us to the new story of Char’s Incan ancestor Quila, the fastest and least recognized messenger of the empire, and her own curious fate.

This new volume of the Assassin’s Creed: Assassins comics feels like it’s beginning largely on the same foot as the previous one. The story dives in fairly quickly, requiring you to find a grip and hold on as it pulls you down the fast paced rabbit hole of Char’s next adventure. There are fresh corpses and a new web of intrigue within the first few pages, and the surviving members of the current cell are drastically different, making it hard for them to come to any unified decision and thusly they often undermine each other.

These choices in storytelling aren’t bad ones, but they become cumbersome when it feels like the book’s overall composition has largely the same struggle.

Depending on the scene, the framing, character positioning, speech bubbles, and dialogue can range from being spot on to haphazard. Each page works, but lacks a consistent flow, which can break a reader’s connection to the events as they happen.

The art is still great, and the color composition jumps off the page in ways you’d never think should work together. In this regard Assassin’s Creed: Assassins has never failed to impress and I doubt it ever will.

Issue number seven is much more coherent than many of the previous entries, and this might be in part due to the fact it’s almost entirely action. Char’s newest unsolicited Animus-dive has her riding shotgun in the mind of her ancestor, Quila, who in her attempts to prove herself has gotten into a heap of trouble with her peers by uncovering a deadly conspiracy.

As Quila’s life hangs by a thread in the past, Char’s current situation isn’t much better as her lack of bloody-minded conviction leaves her cell exposed and their number of enemies multiplied. Tension abounds in this issue where no one’s choices seem to be right and every plan they make seems to break into pieces.

Although Assassin’s Creed: Assassins issue seven’s narrative process seems to have improved from the sixth, allowing the story to be told more effectively, this issue seems to have a different odd quirk; one were the aforementioned action is often (and presumed accidentally) muted.

While there were a few examples in issue six that I noticed but didn’t give much attention, there are several clear instances in issue seven were the lacking onomatopoeia was confusing and a little problematic.

A man being choked can be understood by the “gulk” mumblings coming from his mouth and the image of a rope around his neck. An enormous man falling to his face (after being clubbed?) can also be comprehended, albeit with a touch more difficulty, when it occurs in narrative silence. But a full page image of a man taking a spear through the back of his head in an audible vacuum is hard to accept. Especially when the care has been taken to add the ambient sounds of approaching attackers in the same issue and the same scene.

None of these things ruin the book, I still enjoyed it, but they were still disconcerting moments that broke my immersion quite a bit.

Issue eight of the current Assassin’s Creed: Assassins comics shows us that things with Char and her ancestor Quila have gone from bad to much, much worse.

Char, truly believing that her plans to find out more about how she was recruited into the Assassin Brotherhood is more important than the orders her cell currently has, has taken her roguish behavior to a whole new level, creating even more friction within the small group. The discord between them has made the trio extremely easy prey, and soon Char gets another lesson on how serious the repercussions of her disobedience can be.

Meanwhile, Char’s ancestor, Quila, gets her own lesson about the dangers of pride, as her mission to save her people goes horribly wrong partly due to her own mistrust. Alone in a place she shunned long ago, Quila’s only possible allies are people she wronged in the past.

At this particular point in the story I enjoy how Char’s Animus dives, although ill-advised, mirror her current crisis in character and faith. Although the current circumstances of Charlotte and Quila are not literally related (at least, not as of yet) the similarities in their personalities as opposed to her previous Animus target Tom Stoddard gives the story a more powerful thematic feel.

Although the Assassin Brotherhood clearly needs Char to fulfill missions as directed and use the Animus technology they’ve made available to her responsibly, she considers these events a journey of self discovery and little else. The natural conflict between these two points of view gives a real value to both sides of the Assassin’s Creed concept (in and out of Animus) that is rarely explored and often wasted.

So far, Assassin’s Creed issues 6-8 are a much stronger story than where it started, and although there are still some rough edges, it seems to be zeroing in on it’s own potential. Reading a good story is always a treat, but reading story as it becomes great is a much more rewarding feeling. I’m excited to see what the team behind this series pulls off as we continue in this arc of the adventure.