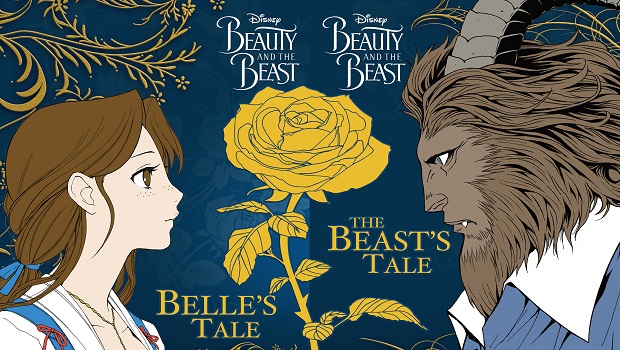 Like it or not, Disney seems set on rebooting its line of animated films as live-action adaptations. While the level of quality is up for debate, you can’t argue with the amount of commercial success each film brought, so it’s understandable that the company would want to do this. With this in mind, Tokyopop has published a set of two manga graphic novels for the live-action release of Beauty and the Beast. Based on the Emma Watson-starring film of the same name, the volumes explore the timeless story in the eyes of Belle (Belle’s Tale), and the Beast (Beast’s Tale). While some details are lost in translation a bit, it’s still a great way to re-experience the film in graphic novel form.

Beauty and the Beast revolves around a curious girl named Belle who longs for an adventure outside her little town in Paris. One day, she realizes that her father Maurice has gone missing, and sets out to find him. Unfortunately for her, he’s become a prisoner in an unknown person’s castle, and a mysterious creature detains him. Belle exchanges her freedom for her father’s, and becomes a captive in the lonely Beast’s castle. While stuck inside, she gains the friendship of the Beast’s furnished servants (who are literally furniture), who tell her that the castle has been cursed, and they must find a way to break the spell before it is too late. The story plays out much like the film it’s based upon, with a few changes: Belle is more proactive in her role as the Beast’s prisoner, cleverly coercing her father to leave in exchange for her freedom, and is more of an equal to the Beast rather than a submissive damsel in distress. We also get to see why Belle’s mother is gone from her life, and the answer is a bit saddening. These changes in the live action film makes the experience refreshing rather than a retread, and this manga does a good job in staying true to its source.

While the Beauty and The Beast manga is sold in two volumes, they’re actually different perspectives of the conflict at hand rather than a direct continuation of each other. Belle’s Tale focuses on the titular heroine as she interacts with the brutish Gaston and her townspeople. Her side of the story is the only time we see the village setting, as The Beast’s Tale deviates from the source material and is centered around the transformed prince. As such, there are a few pages in both volumes that are nearly identical, but the context for those panels differ depending on the character’s perspective you’re reading. It feels a bit too close to experiencing déjà vu, but there’s enough subtle changes to the panels that it’s easily forgiven.

It’s a shame that the action doesn’t build up early in Belle’s Tale, since we have to spend quite a few pages with the uninteresting village. I prefer The Beast’s Tale over the former because it jumps right into Belle’s father happening across his castle. You also get a fairy tale prologue that establishes the Beast’s ungrateful personality, which is more exciting than Belle’s village experience. The Beast’s Tale also displays the Beast’s emotions and agenda to the situation, as he needs to break the curse that he put himself and his servants; it gives the volume a sense of urgency and conflict in a film that had an otherwise weakly developed villain. Making this conflict front and center in the Beast’s Tale rather than a side-story in Belle’s Tale makes this volume a more entertaining read.

The character designs in the manga are mixed, since adapting them from a live action film (which in turn is adapted from an animated film) is uneven. While the human characters are shown in a regular manga style, the servants seem a bit off in terms of facial expressions and detail. Much like the live action film, they’re either firmly into uncanny valley territory or just too wooden to work; thankfully, they’re not the center of attention, so it’s a minor annoyance. However, if there’s one character that I adored here, it would be the Beast. While he benefits from CGI in the live action film, here he’s drawn to be monstrous yet humanized due to his transformative personality. You can really feel him warming up to Belle with his design, and the anthropomorphic Beast looks a tad more handsome than his live action counterpart. Some concept art pages at the end of the volumes take a look at rejected designs, and I really appreciated the Beast’s final likeness due to these concepts.

One thing that I feel the volumes could have done to make them feel a tad more authentic was the inclusion of song lyrics. The Nightmare Before Christmas’s manga adaptation did a great job with this, as it did insert some verses into a few pages to highlight key moments in the story. On the other hand, The Beauty and the Beast manga omits them entirely, which lessens the magic of some moments; I would have loved to see the lyrics to the titular song as the two danced together in the ballroom.

Overall, Beauty and the Beast is a great live action update to the classic animated film, and the manga does a good job in adapting it. While I recommend The Beast’s Tale over Belle’s Tale, both volumes are worth a read if you’re a fan of the live action film or if you skipped over it and just need a refresher.

Elisha Deogracias is an aspiring accountant by day, freelance writer by night. Before writing for Gaming Trend, he had a small gig on the now defunct Examiner. When not being a third wheel with his best friends on dates or yearning for some closure on Pushing Daisies, he's busy catching up on shonen manga and wacky rhythm games. Mains R.O.B. in Smash. Still doesn't know if he's a kid or a squid.
Related Articles: Beauty and the Beast, Beyond the Page
Share
Tweet
Share
Submit