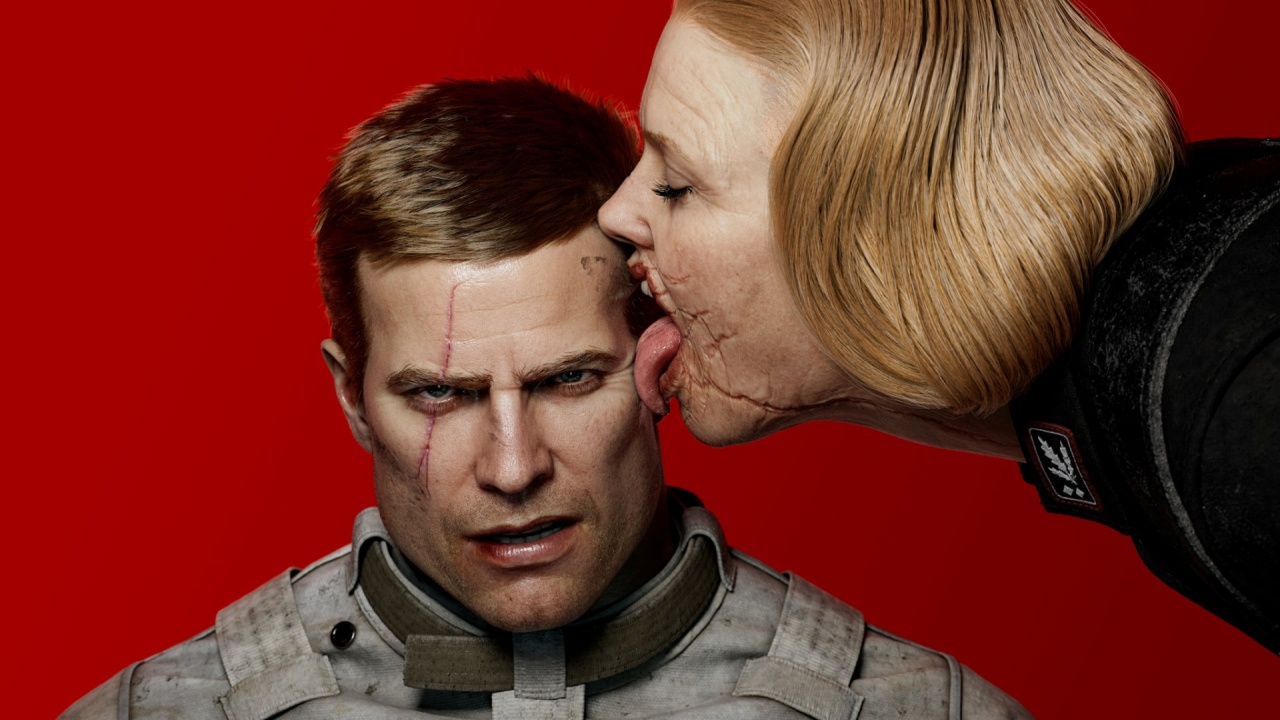 If, a year ago, you told me that Wolfenstein II: The New Colossus would end up on Nintendo’s flagship console, I’d have had to laugh. Rather than retread all the ways that this game improves on its predecessor (and boy howdy does it — our editor Travis Northup gave it a Nazi-slapping 95% in his review) I’m going to focus on the experience of playing the game on the Nintendo Switch — a destination I’m still shaking my head at, despite it being right here in my hands.

Developer Panic Button makes a triumphant return to helm the port of this title, fresh off their port of the Nintendo Switch version of Doom (Executive Producer Mike Dunn’s review on that platform can be found here) for Bethesda. Once again they’ve been tasked with a similar feat — stuffing the impossible visuals of a game built for bleeding edge consoles and PCs onto a game console that’s meant to be taken with you on trains and to the park.

First and foremost, it’s important to remind you just what you are dealing with under the hood of the Nintendo Switch. If you look at my Xbox One X review, I break down what each console is bringing to the table. Spoiler alert — the Switch is running a 1.02Ghz processor, with a 768MHz GPU, and just 4GB of 1600 MHz memory that drops down to 1333MHz when undocked. If you want to boil it down to just one stat comparison, the Switch has 25.6GB/s memory bandwidth, whereas the Xbox One X sports a staggering 326GB/s. Let’s not even get into what a high end 4K machine can pump out with something like a 1080TI at the helm. Panic Button had their work cut out for them.

To ensure a stable framerate, the team had to pull the detail level down a significant amount. Naturally, it’s most noticeable when the game is docked and played on a large screen, but even at 720p on the smaller more portable screen there are moments where some of the background elements are downright muddy. It’s not enough to kill the game by any stretch, but it’s impossible not to notice. Rather than describe it further, allow me to show you the game in motion.

If you’ve played the game, and have a very keen eye for detail, you might have noticed some very subtle changes. Perhaps windows that were once open are now closed, or a wall might be moved slightly to help partially occlude an area that was wide open. These subtle changes help the Panic Button team manage the limited memory footprint of the Switch while keeping the polygon count high. While the overall detail level has certainly taken a bit of a hit, there is actually quite a bit of visual wizardry going on here to make it one of the best looking ports, even when it does occasionally look a bit more blurry than we might like.

There is an added motion aiming system if you are inclined. I cannot imagine why you would be as it adds absolutely nothing to the experience but frustration. The game is already difficult by design, and this just makes controls awkward. Hard pass. Use the Pro Controller and spare yourself that nonsense.

No. Absolutely not. Just no.

I was very happy to see that the game has not been toned down at all for Nintendo’s “family console”. Every f-bomb, racial slur, gout of blood, shocking moment, and gruesome end is present and accounted for here, in all of its gory glory. It’s good to see Nintendo work with its partners to stretch its catalog beyond cute and cuddly. As its audience grows older, so should the platform.

I was surprised at just how stable the framerate Wolfenstein II: The New Colossus is on the Nintendo Switch, at least for the most part. Once I reached the New Orleans section of the game I saw some large swings in the framerate, which is somewhat expected given the massive open areas. Unfortunately, these get a little worse in undocked mode. The game has plenty of framerate hitches while on the go, though it thankfully never becomes unplayable.

New York’s framerate can get a little dicey, moreso when undocked.

A quick check of Steam / GameStop puts the price of the PC, Xbox One and PlayStation versions at a third of the $59.99 asking price for this port. If Switch is your only platform, then game on — please don’t miss out on a gritty and amazing shooter that tells a mature and surprisingly excellent story. Just know that BJ Blazkowicz is gonna look a little more shaky if you take him off the dock. I’m still surprised Panic Button has pulled it off, but here we are. Now, if you’ll excuse me, I’ve gotta punch some Nazis in the face.

Ron Burke is the Editor in Chief for Gaming Trend. Currently living in Fort Worth, Texas, Ron is an old-school gamer who enjoys CRPGs, action/adventure, platformers, music games, and has recently gotten into tabletop gaming. Ron is also a fourth degree black belt, with a Master's rank in Matsumura Seito Shōrin-ryū, Moo Duk Kwan Tang Soo Do, Universal Tang Soo Do Alliance, and International Tang Soo Do Federation. He also holds ranks in several other styles in his search to be a well-rounded fighter. Ron has been married to Gaming Trend Editor, Laura Burke, for 21 years. They have three dogs - Pazuzu (Irish Terrier), Atë, and Calliope (both Australian Kelpie/Pit Bull mixes).
Related Articles: Let's Play, Wolfenstein II: The New Colossus
Share
Tweet
Share
Submit