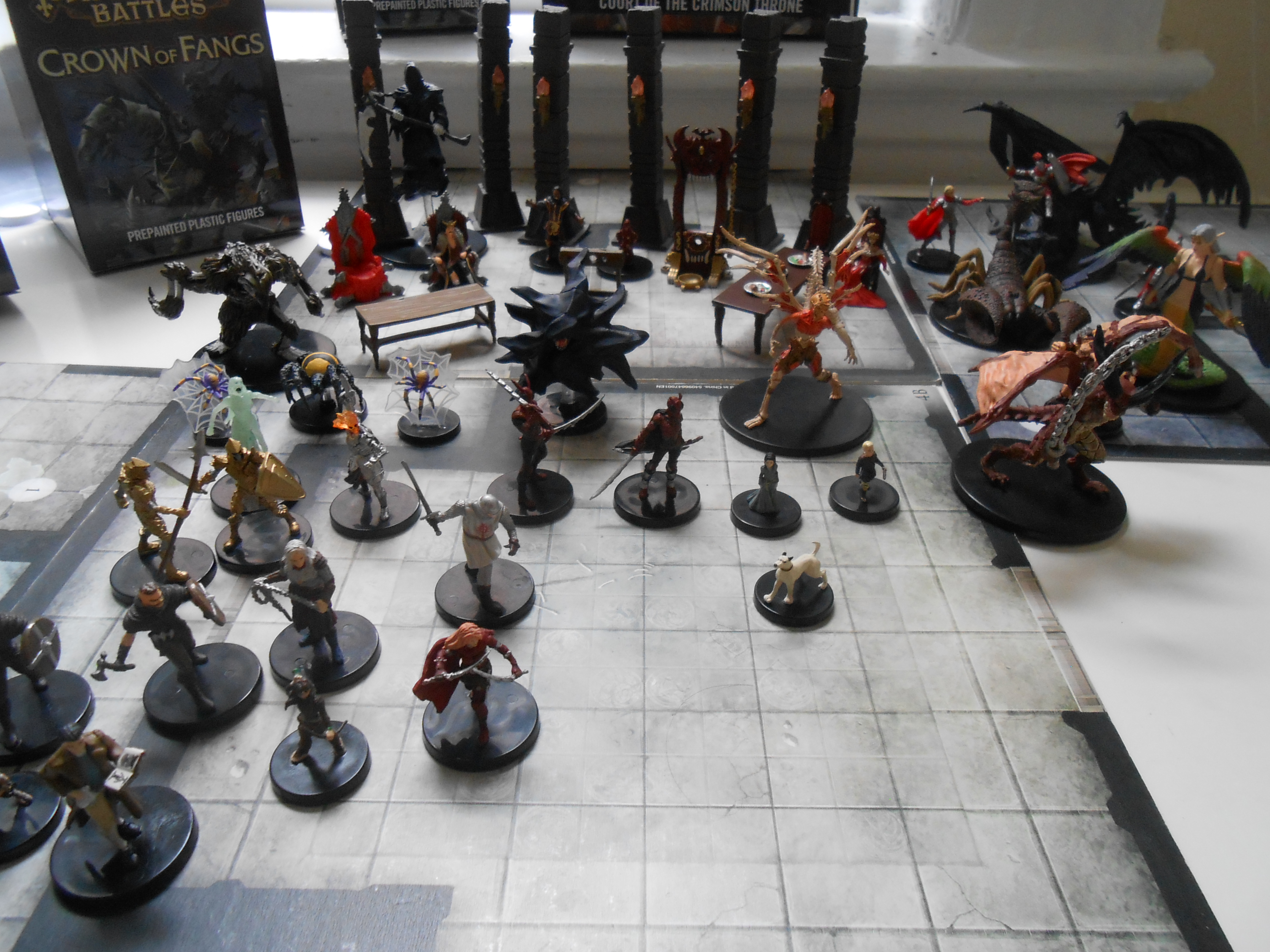 Curse of the Crimson Throne’s climax was already a thrilling, deadly challenge for players, and the release of Pathfinder Battles’ Crown of Fangs set brings the adventure to your tabletop with specialized miniatures. The set of figures, as well as accompanying set dressing and architecture, is specifically built to replicate the enemies and environs you will encounter in Korvosa’s grand palace.  Available soon, they are tailor made to follow the Crown of Fangs portion of the Crimson Throne adventure path.

Crown of Fangs comes in two varieties: the individual booster packs of figures and the Court of the Crimson Throne battle box. The latter has the set of the throne room ready with a massive table, torch-bearing columns, implements of execution (with the necessary executioner) and the royal party who people the room. The Crimson Throne itself strikes an imposing figure, as well as the queen who sits atop it, glowering down at you amidst torchlit columns.

The booster packs are a mix of the many other beings you will face, friend and foe alike, as you make your way to the adventure’s climax. These miniatures are faithful to the adventure, bringing the horrid monstrosities to life, all in vibrant detail. The towering monsters are the real highlight of this set, striking startling figures as soon as you drop them on the table.

Behold the beauty and majesty that is the Owlbear skeleton

That said, the NPCs from Crimson Throne are just as nice to see; the minis were based directly off of the original art, and the small details show through. You will be able to use some of them throughout the course of the adventure, and likely further. While they do stick to the right detail, most of these minis will be able to fit well into any adventure as player pieces or antagonists.

The variety of creatures is the greatest strength not only of these miniatures but of the adventure itself. In addition to the usual mainstays of skeleton warriors, giant spiders, and brown-shirted thugs, there are also unusual pieces which you will be looking for an excuse to use.

And look, our old friend Cabbagehead

Crown of Fangs has minis for young children, saving you the trouble of pretending that your halfling rogue with seven knives is really a seven year old girl. Alongside those are mantis assassins, a dragon riding knight, two types of devils, and more.

Everything is brought to the table with flourish and detail. The plastic is strong, and despite the many blades, capes, horns, and appendages, you should not have to force them into shape. They also have details ranging all over, from interlocking chain  mail to the worn ridges of monstrous scales. The paint accentuates these details well…for the most part. It shades into small textures admirably and never bleeds over into the wrong part of the figure. The only places that consistently feel wrong are faces. Many human faces have a pasted on, blank-eyed stare that is unintentionally unsettling.

Crown of Fangs is expected to be available in May, which should be right in time for those of you who started the adventure at the time of release. Afterwards you are free to invent whatever stories you can for these fell beasts and their royal coterie.

John Farrell is a legal aid attorney specializing in domestic violence, living in West Chester Pennsylvania. You can listen to him travel the weird west as Carrie A. Nation in the Joker's Wild podcast at: https://jokerswildpodcast.weebly.com/
Related Articles: Pathfinder Battles, Tabletop
Share
Tweet
Share
Submit