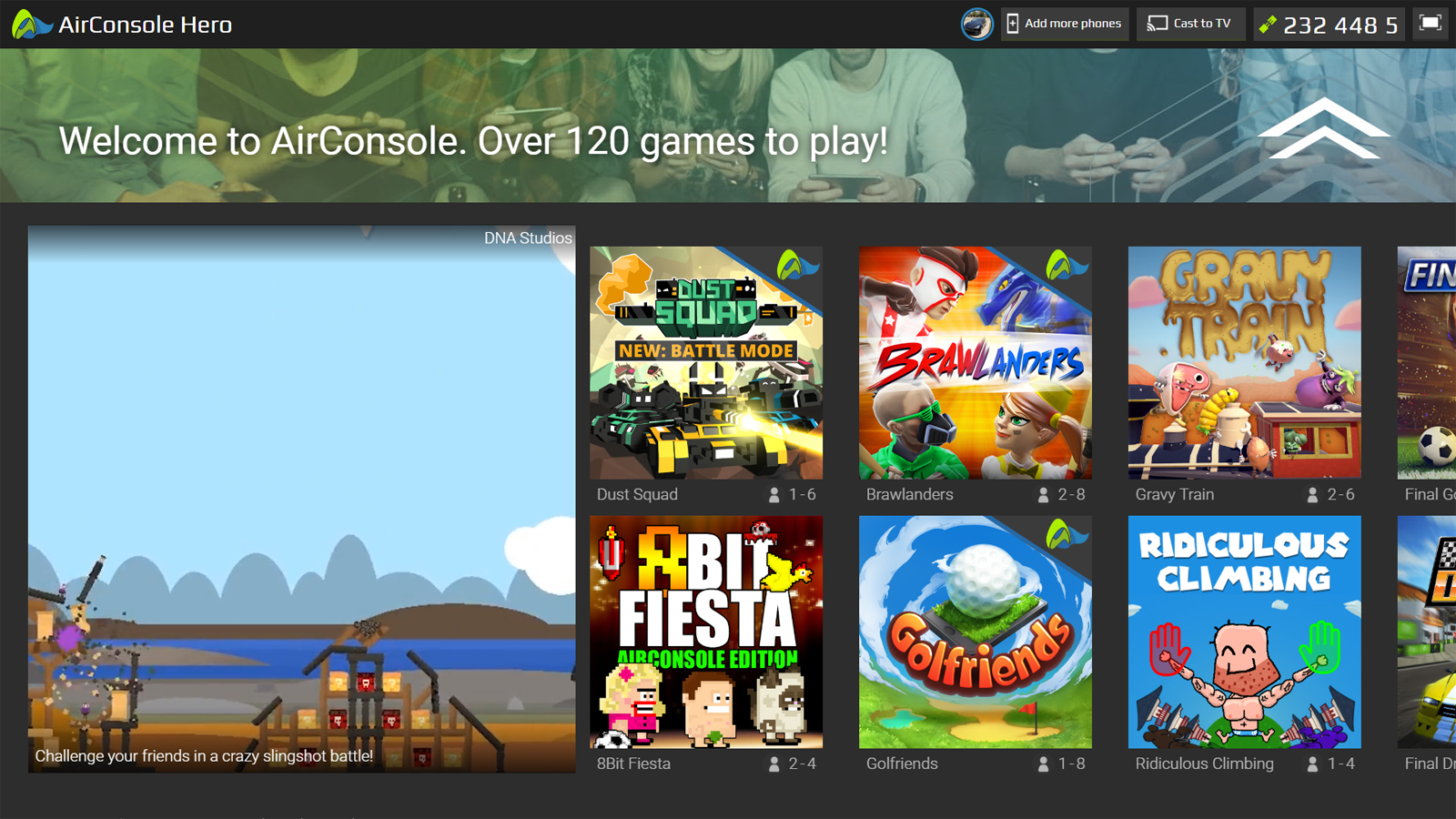 I’d forgive you if you’ve not yet heard of AirConsole, as it’s not exactly a traditional console. In fact, there’s not actually a physical console. If you are a little lost, I can understand that, too. AirConsole is actually a web service built for the cloud where would-be players can jump in and play multiplayer titles together using a smartphone, tablet device, or computer as a controller.

First things first, since there’s nothing to set up, you’ll need to create an account at the AirConsole website. You can do this from a PC or handheld device, but you can also tackle it from a device like a Smart TV as long as it has some level of browser support. If you are using iOS / Android device you can download an app to run natively, or eschewing that, you can run the experience entirely in a browser.

For players to join, they simply log into the website and they are presented with a code to punch in. After all players code in, the game will sync all of the phones and the game begins. There are no lengthy downloads or bandwidth-intensive apps to juggle or install, and that’s great for any pickup-and-play party — moreso when people are adding and dropping frequently.

Yep, it’s just as bad as you remember, but in a good way.

Developer N-Dream has two tiers of subscriptions. While the vast majority of the 120 currently available games are free to play, there are a few that are not. With a $4.99 “Hero” tier subscription you get an ad-free experience that allows more than 3 players, in-game perks, and early access to new games. Given that you can cancel without a contract at any time, it’s easy to justify the bump ahead of a party or two, knowing that for less than a cup of coffee, you can entertain a whole group of people with very little effort, and without a cumbersome setup.

Quite a few of the games on tap could easily be described as derivatives of familiar games, such as “Cards and Humanity” and “Switch3r,” where you swap candies around to match them, but there are quite a few higher quality titles like Final Goal (a soccer title) and Racing Wars: Season 2 which immediately reminded me of the NES classic Pro Am. Golf Friends reminds me of the classic Zany Golf games from the Amiga days, and that’s high praise indeed.

Other highlights of the library include Brawlanders which is a Smash clone, PixWing which looks like an updated Pilotwings, TicTacBoom (Bomberman?), Tiles of Doom (PS1 game Blast Chamber?), and Castle Hustle (Kinda reminds me of Castle Crashers), just to name a few. There are also several trivia games, which are always a crowd favorite.

As my wife is a singer, I’d be remiss if I didn’t mention just how great the Karaoke portion of AirConsole is. Featuring thousands of songs, and using your smartphone, tablet, or any microphone plugged into your PC as your voice input device, you can channel your inner Retsuko from the Netflix show Aggretsuko and rage about your boss from the comfort of your own home. Just about any song you can imagine is here, including Taylor Swift, Stevie Wonder, Men at Work, Michael Buble, and everything in between. We did run into a few issues during testing where songs kept coming up as “Not available in your country”, but after a few re-attempts, it eventually cleared up. I suspect this is a temporary hiccup on the AirConsole side.

Time to belt it out? It’s easy to join and embrace your inner Retsuko

The best part of AirConsole is that it’s party friendly in a way that the PlayStation 4, Xbox One, Switch, or PC can never be — you can carry it to your next gathering with zero planning. Since all that is required is an Internet-connected smart TV, you can set up an impromptu party that anyone can join by simply popping a code into a device they are already carrying.

Thankfully, you don’t have to take my word for any of this — you can try it out for yourself, completely free of charge. Navigate to AirConsole.com and give it a spin for yourself.

Ron Burke is the Editor in Chief for Gaming Trend. Currently living in Fort Worth, Texas, Ron is an old-school gamer who enjoys CRPGs, action/adventure, platformers, music games, and has recently gotten into tabletop gaming. Ron is also a fourth degree black belt, with a Master's rank in Matsumura Seito Shōrin-ryū, Moo Duk Kwan Tang Soo Do, Universal Tang Soo Do Alliance, and International Tang Soo Do Federation. He also holds ranks in several other styles in his search to be a well-rounded fighter. Ron has been married to Gaming Trend Editor, Laura Burke, for 21 years. They have three dogs - Pazuzu (Irish Terrier), Atë, and Calliope (both Australian Kelpie/Pit Bull mixes).
Related Articles: AirConsole, Industry
Share
Tweet
Share
Submit