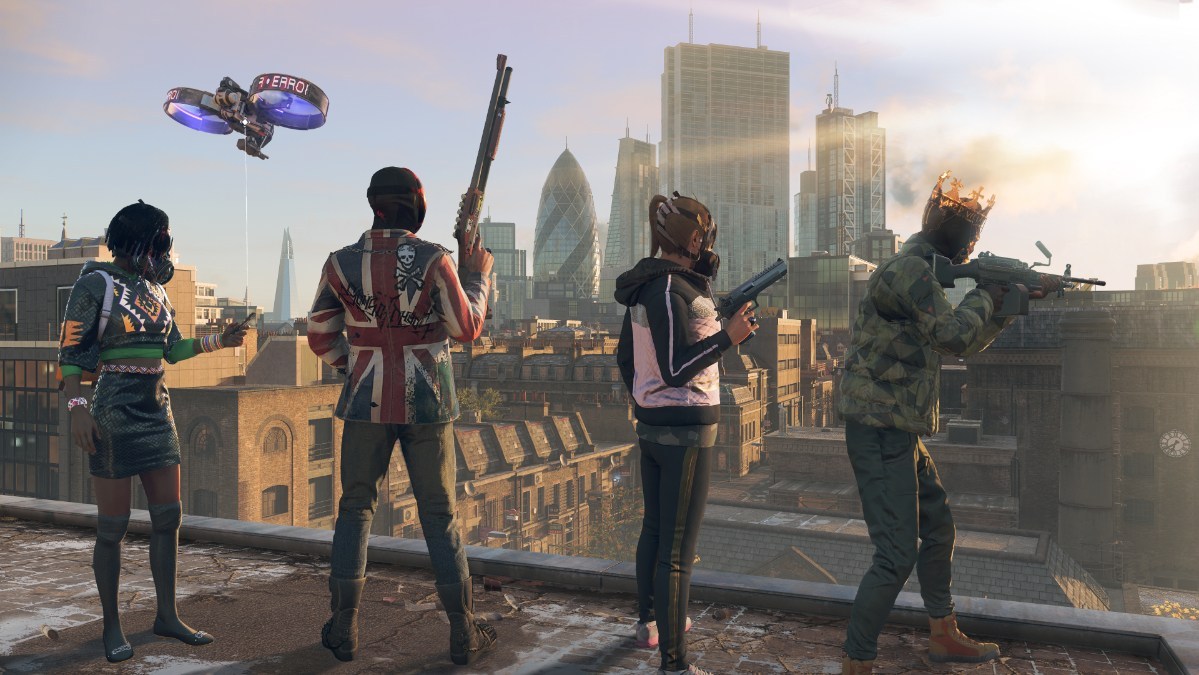 After 40 hours, maxing out the available ranks, and spending over €100,000 of in-game currency buying clothes, I can confidently say Watch Dogs: Legion online lacks any reason to return, despite enjoying maxing out nearly everything. The online mode, released on consoles first and PC second (I played on PC), features randomly generated solo missions, matchmade cooperative missions, a spiderbot battle arena, and the formidable Tactical Ops. It sounds like it should keep things interesting for a long, long time, but where Watch Dogs: Legion online stumbles is its reward structure.

Online is set up with a free Fortnite-like battle pass system, and nearly all the rewards run through this battle pass. Nothing you did from single-player carries over to online, so you have to earn all your tech again and recruit new agents to DedSec. It’s not as daunting as it sounds since tech is much cheaper, but you have to earn “Influence” (online’s version of Tech Points) in order to unlock the tech and new recruits. You can’t find Influence in abundance like you could with Tech Points in single-player. The only way to earn Influence is by leveling up ranks in the battle pass, finding Hotspots that might give you a small chunk of Influence, and completing the one daily challenge that awards a meager sum of points. Everything in Legion online revolves around giving you experience to earn these ranks, but once you’ve reached the rank cap, all you’re left with is the meager daily Influence and Hotspots. Consequently, the only reason to keep playing is to farm for ETO (the in-game currency) because it’s too exhausting to grind for Influence to recruit more operatives.

The structure of online holds up, though. That’s why it’s possible to still enjoy the grind until rank 50. Solo missions mimic side missions from single-player. You’ll be tasked with stealing and blowing up cars containing evidence; you’ll have to take out marked enemies, and sneak through enemy faction locations to rescue hostages. These missions are randomly generated from a pool of missions within each borough. Recurring city events happen within the southeastern section of London but it’s the same mission and difficult to accomplish solo. Co-Op missions matchmake you with people within your instance of London or with others who are playing online. These don’t require as much coordination between teammates, but it’s fun to matchup with others and fight through waves of drones and enemies. These missions could use more stealth approaches and a kick feature for those who refuse to adhere to the stealth requirements of one particular mission, but they’re great at preparing you for Tactical Ops.

Tactical Ops is the toughest set of missions available in Legion online. They require teamwork and communication and the missions themselves, while heavy on aggressive tactics, can be played stealthily and do have a mixup of different mechanics. The first mission – which has been heavily advertised by Ubisoft – requires people to take on baddies in buildings on opposite ends of London. Mistiming your objectives can make it more difficult for the other side, which could be disastrous since one person dying means the mission starts over; a reality of all Tactical Ops missions. Another level requires someone to control a microdrone while teammates protect them, essentially eliminating one person from fighting. The levels have a noticeable difference in feel and variety compared to what else Legion online has offered, so they’re worth finding a group of trusted players to tackle them. And as expected, Tactical Ops is the least buggy piece of cooperative online. Everything else is a trash heap of bugs.

Solo missions have it the worst. Any mission that requires stealing a car is likely to have a car within a car. For example, you get in one car and you drive off with an entirely different car. Meanwhile, your objective car stayed put and when you try drive, it won’t move. Then you have to cancel the mission, which means you don’t receive any experience. In the case of Co-Op or Tactical Ops, you have to start over. Another mission requires infiltrating MI6 to steal a car, and when I attempted to open the vehicle, it exploded. That happens every single time. It’s not supposed to do that. 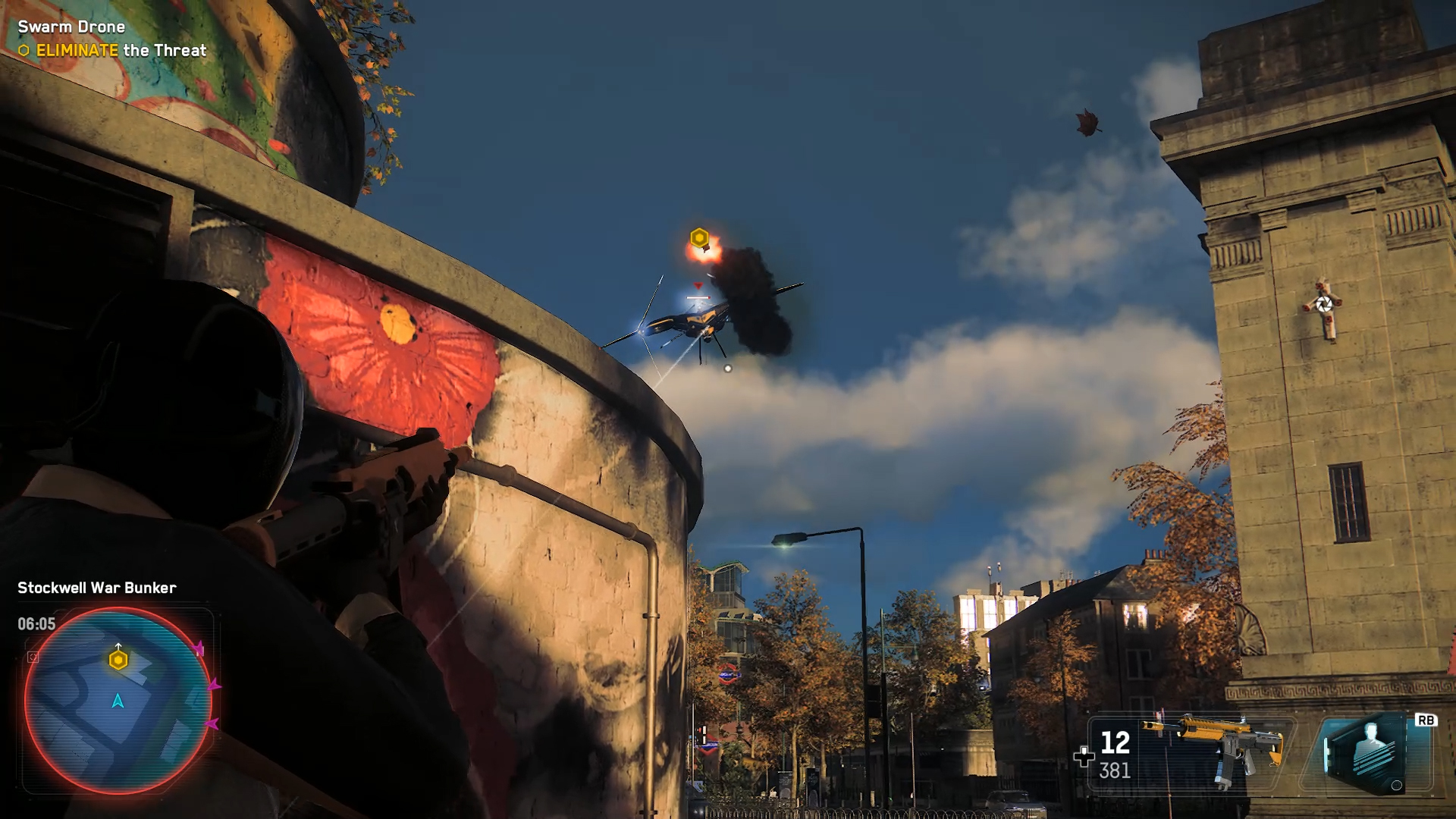 One of the latest bugs created endless Riot Drones that chase you during certain Co-Op missions. You destroy a set of them, more show up. Again, it’s not supposed to be that way. Another bug generated Chase and Riot Drones out of thin air, and they attacked. One time I had Chase Drones inside the lobby for a Tactical Ops mission. I could go on and on about the frequency and variety of bugs I found. Some bugs were entertaining, but when they waste your time or erase the hard work you put in with others to complete a tough mission, it’s devastating and infuriating. The lack of content and all the bugs demonstrate Legion online is not ready for public consumption.

Thankfully, no new microtransactions have been added since the launch of Watch Dogs: Legion, and there’s little reason Legion online gives you to engage with the microtransactions. Watch Dogs: Legion online seems to exist purely on a dwindling, perhaps impatient, single-player audience – an audience desperate to continue to engage with Legion’s legitimately compelling open-world. Our Editor-in-Chief gave it an 8. I played it alongside him, exchanging messages of delight as we liberated London from Albion’s reign. But Legion online needed to stay in the oven longer.