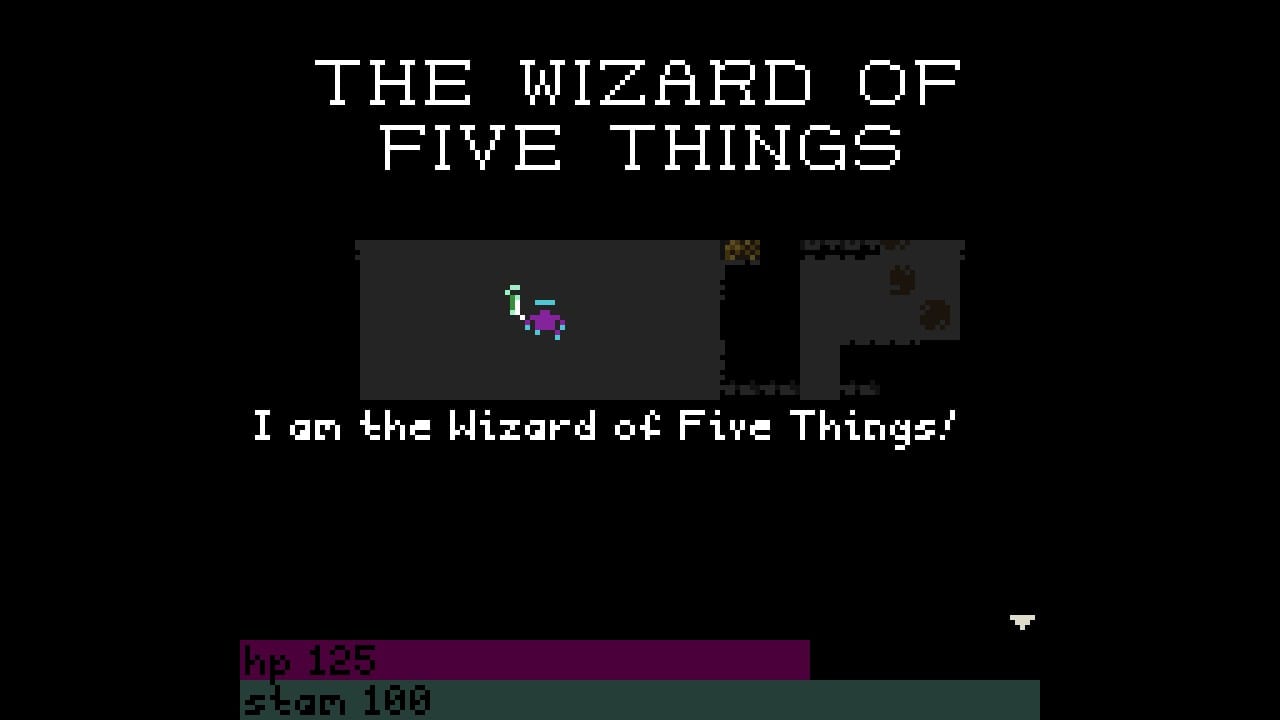 While I do review games in my free time, let’s just say I enjoy shorter experiences more than 40+ hour JRPG campaigns these days. I love short, sweet experiences that I can play in a few hours, and sometimes if I’m feeling adventurous, I would cram a few of them in a day.

Today, the 10mg Collection dropped on Steam and itch.io, and highlights 10 different titles, which are advertised as… well, ten-minute games. I decided to spend an afternoon and play through the ones available on Steam and see how I enjoyed them. Since they’re rather short, I’ve made small blurbs of one paragraph each as well as how much total time it took for me to complete a certain game; other than “Stroke” and “SLASHER, Interrupted” which I played multiple times to get all content, I played through each title once to completion. 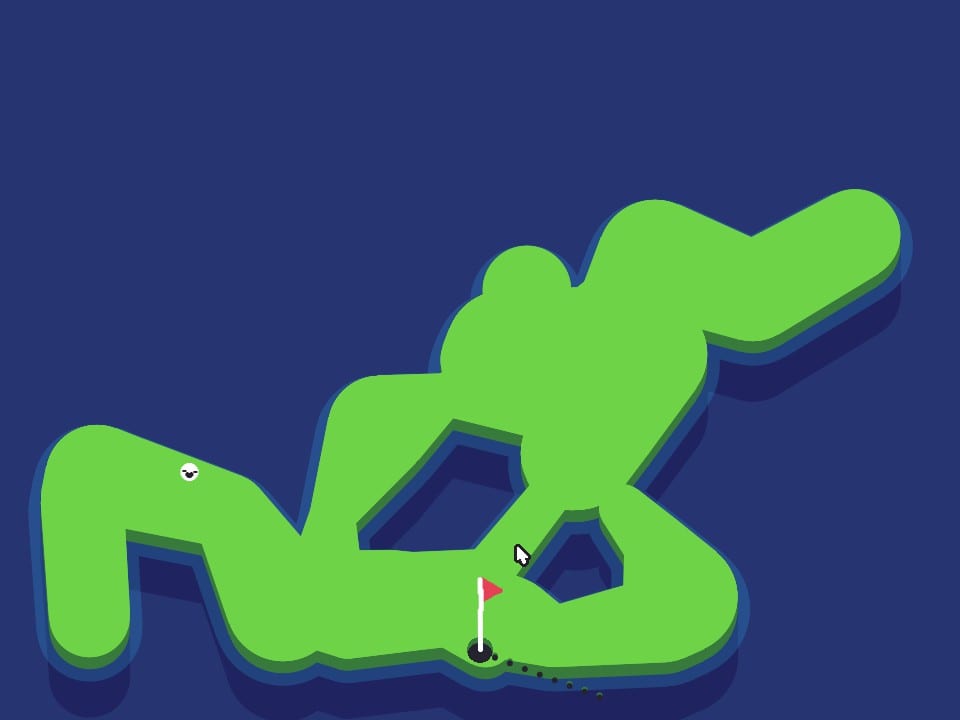 This was the first game I played in the collection, and it wasn’t too great an impression, if I’m being honest. This is a collection of small microgames that should last 10 minutes, but I ended up playing for 20 because I got stuck on the Pipe Panic-inspired game. It’s a small little minigame collection which isn’t fleshed out because of the length, and left me wanting more. 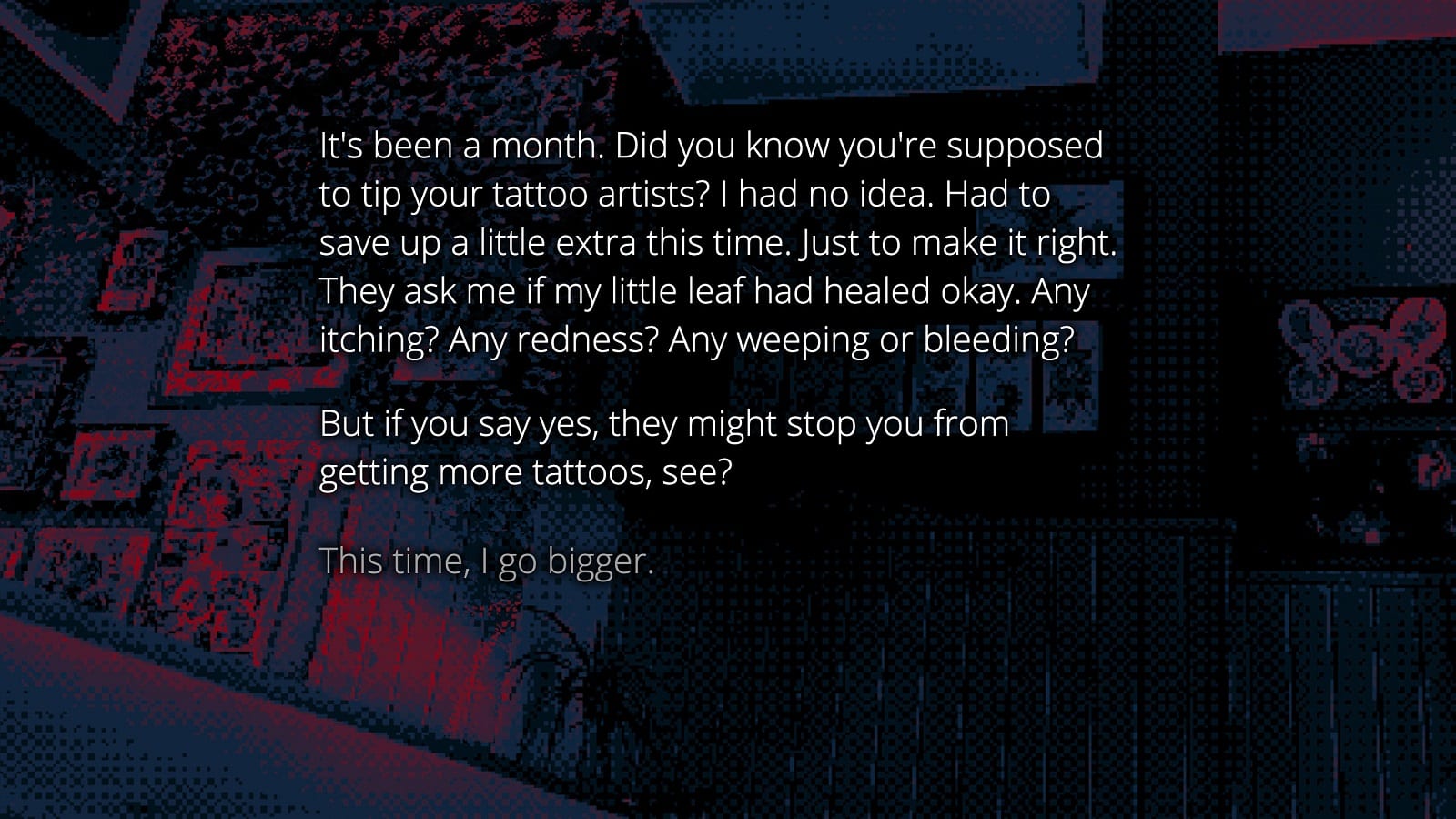 This is a kinetic novel (which means no choices are made) about a girl living in a small town. While there’s much to infer here, the story goes in some mature territory as well as symbolism with the main character’s tattoos. It’s a heartfelt narrative that’s over in less than 10 minutes but also has an ending that clashes with most of the story; that said, I did dig the minimalist glitch backgrounds and setting. 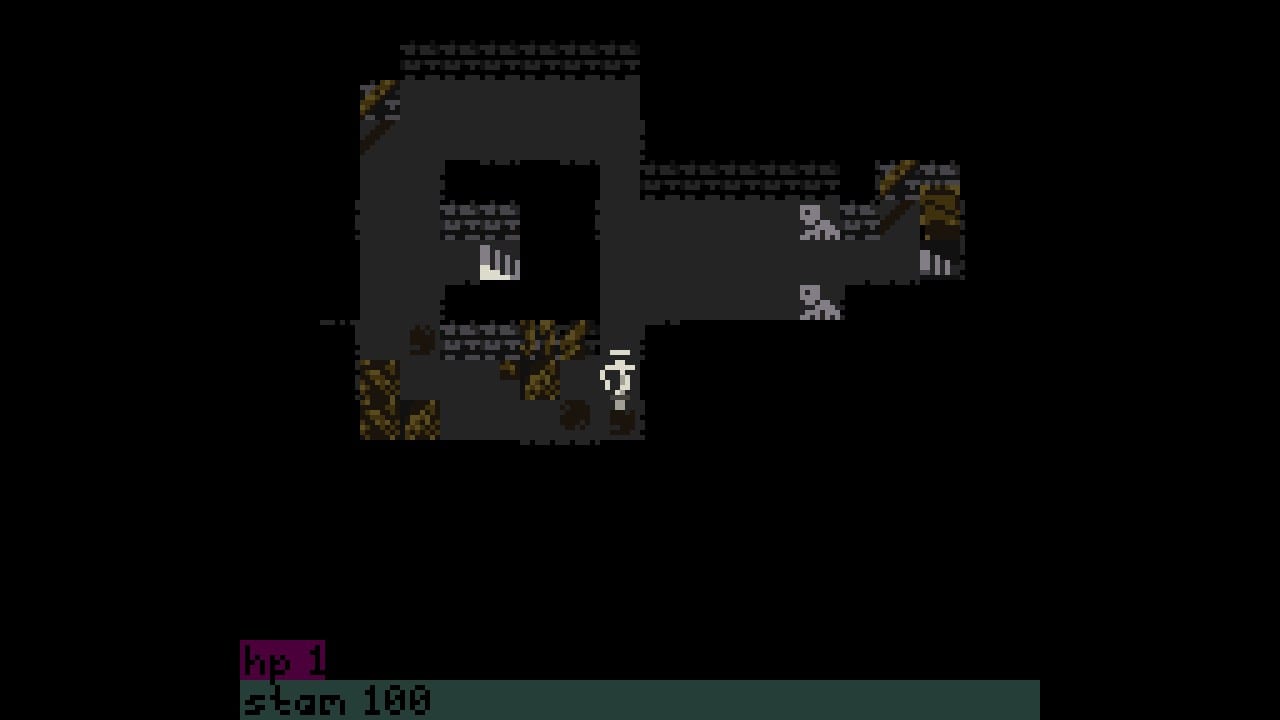 An interesting concept, as this game is a small dungeon crawler with a mechanic where every time you die, you wake up and gain a little extra health. While the main attack is a bit unwieldy, I did enjoy my time playing, and the pixelated graphics were a nice throwback to older Atari games. That said, it ends on an unsatisfying note (I got morphed into a slime, ending my game prematurely with no indication that you can dodge the attack), but considering this is issue 0, I can’t wait to see another installment. 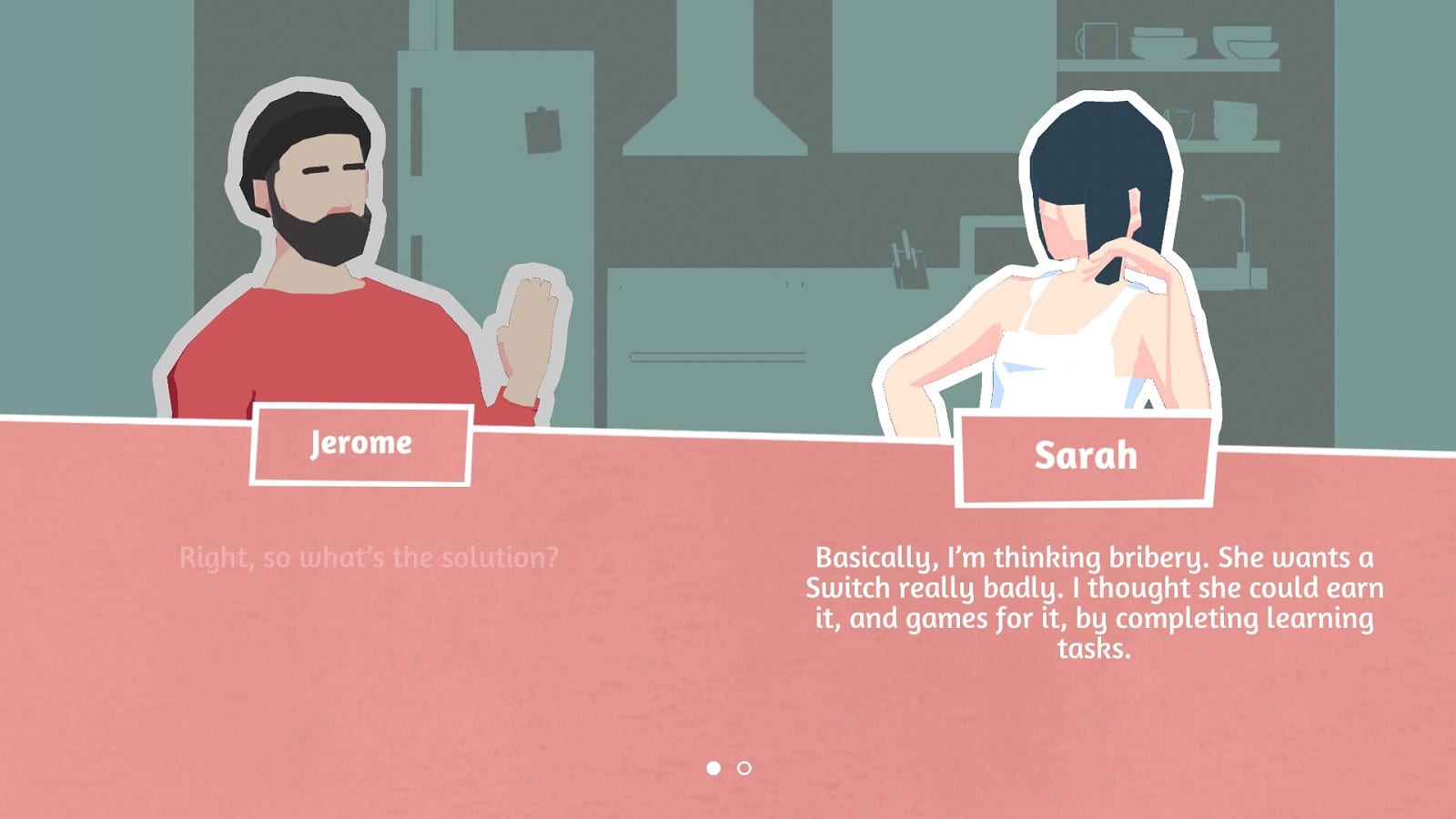 Subtitled “a Marriage Simulator”, Locked In tells the story of Jerome and Sarah, a couple living together with their child Grace during the pandemic. It’s a bit of a current event story the pandemic plot. You’ll need two players to play this game (one player uses the keyboard and the other uses the mouse). Considering the subject matter of the game, it does seem a bit weird to be in close contact with someone else in real life instead of social distancing, but perhaps that’s the point? Anyways, it’s actually a neat little visual novel where you both have to press your buttons in order to advance the dialogue, and the ensuing disagreements with each other are parallel to some conflicts that couples might have when raising a child or even going out in the time of a pandemic. This was a small little treat. 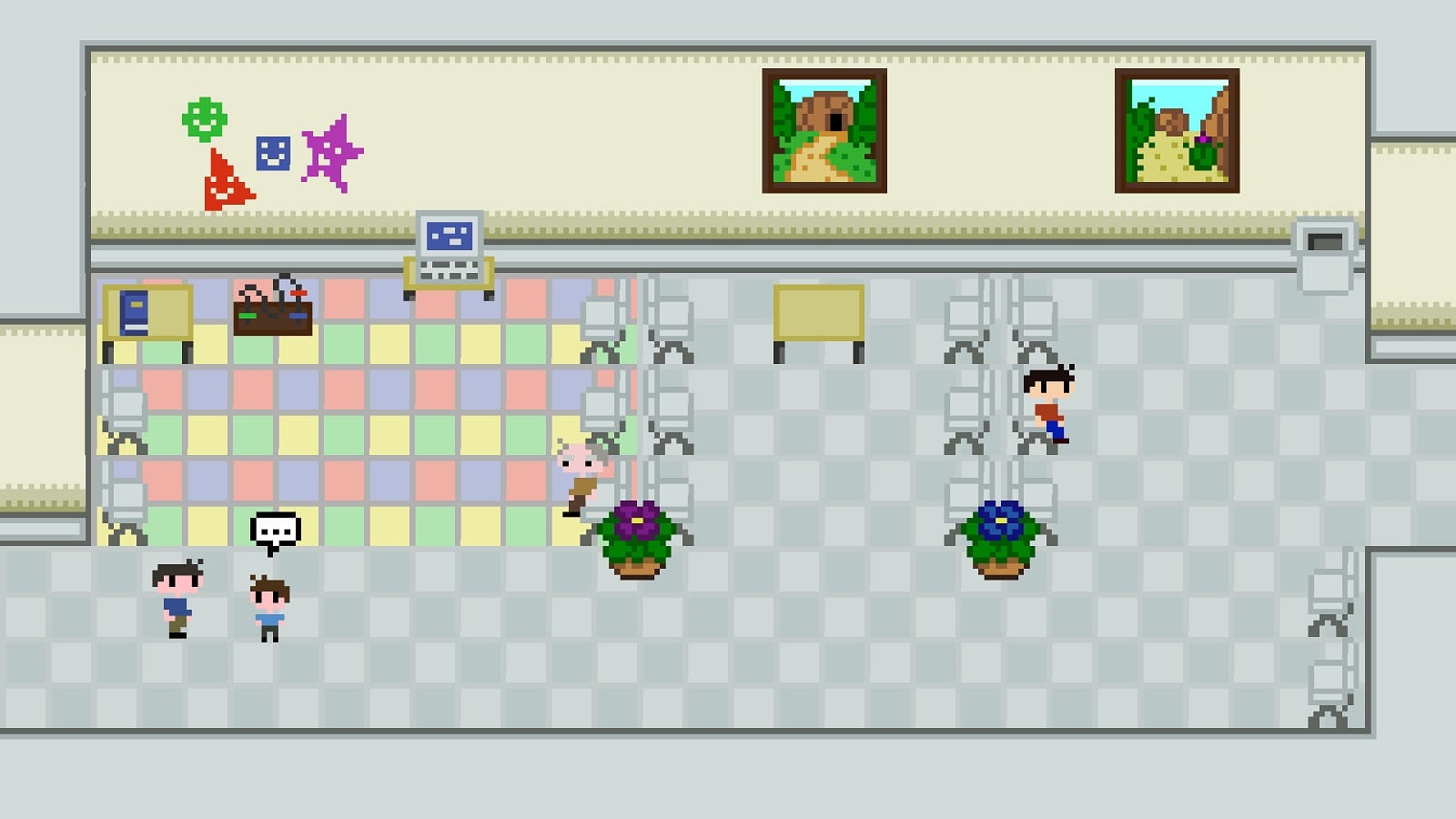 Stroke is about a dad who checks into a hospital when his wife gets a stroke. You can console your father, your son, and even a random passerby who’s in a similar situation to you. While there’s not much you can do except explore the hospital and make a few choices, it’s an emotional ride, especially for those who know someone who’s experienced a stroke. 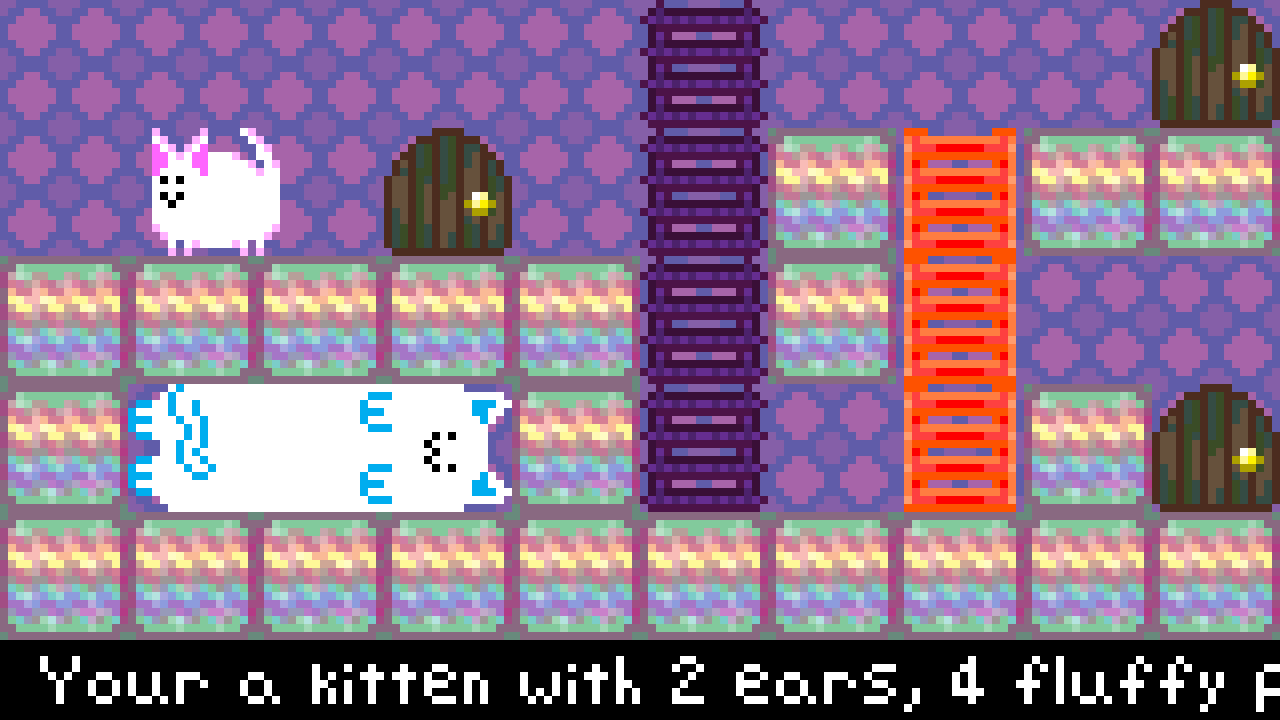 So basically this game is if the Annoying Dog from Undertale coded a game but made it about an adorable cat. That isn’t a bad thing, however, because it’s probably my favorite of the bunch; it acts like a little metroidvania where you need to get your cat to spell out the word “KITTEN” by entering rooms and manipulating the environment in order to advance. It’s a tongue-in-cheek game that’s adorable and really hilarious, from the ticker tape text on the bottom to the fact you have to wait 90 real-life seconds in order to play. Couple that with an achievement for actually playing the game for 10 minutes, and you have a sweet little idea that perfectly encapsulates the philosophy of the 10mg collection.

10mg: Always Down (Time Played: Approximately 8 minutes based on self-timer) 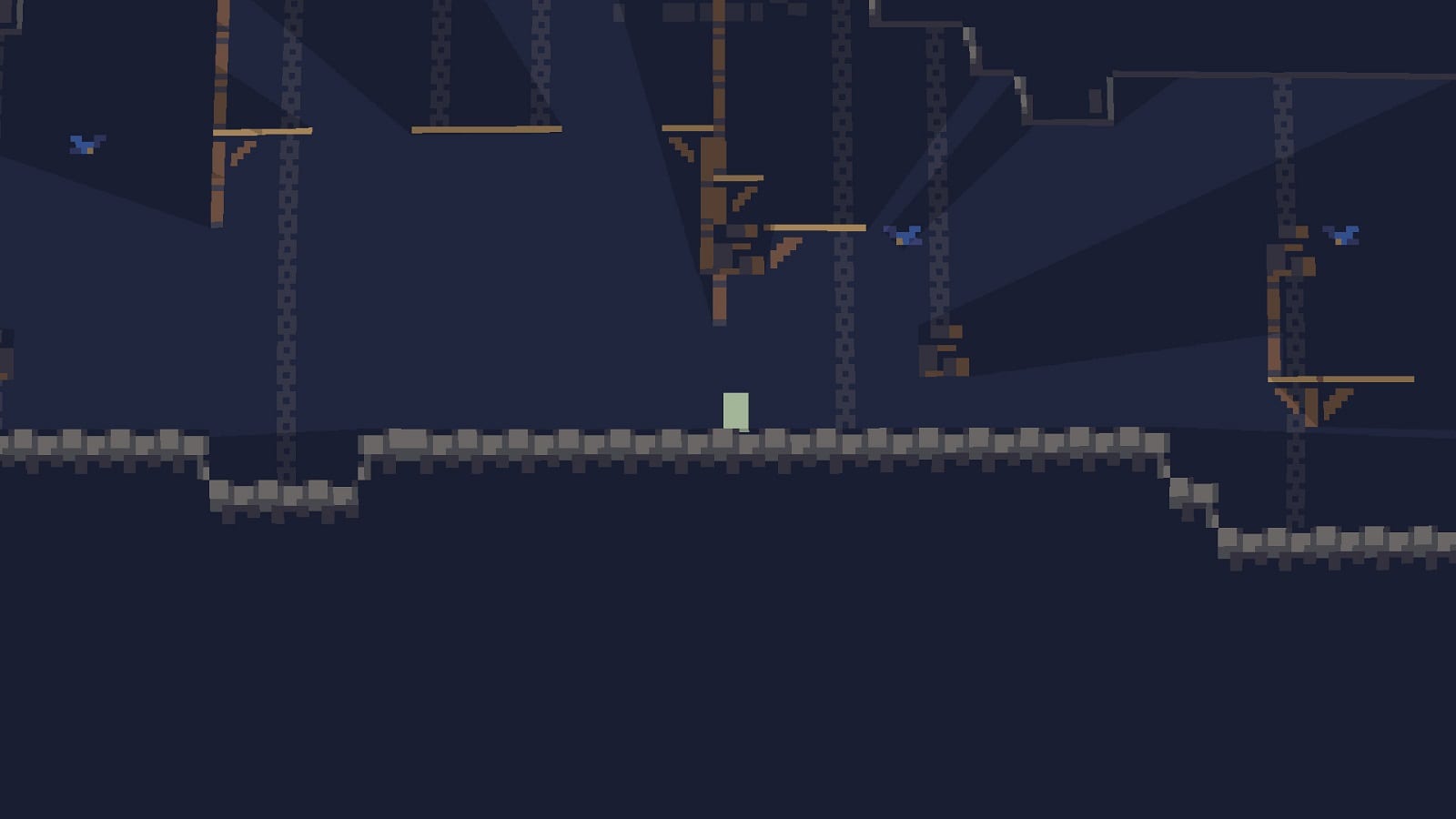 Oh hey, a platformer where you get slower as you go down but can jump higher to compensate! Narratively, it’s to signify your slow change into a monster going down further, but I did enjoy this fun little mechanic. It reminded me of Thomas was Alone with the blocky models and the text to speech intro, but like You are a such a Soft and Round Kitten., this game encapsulates the 10mg collection philosophy by not overstaying its welcome and just being a fun time with its platforming. 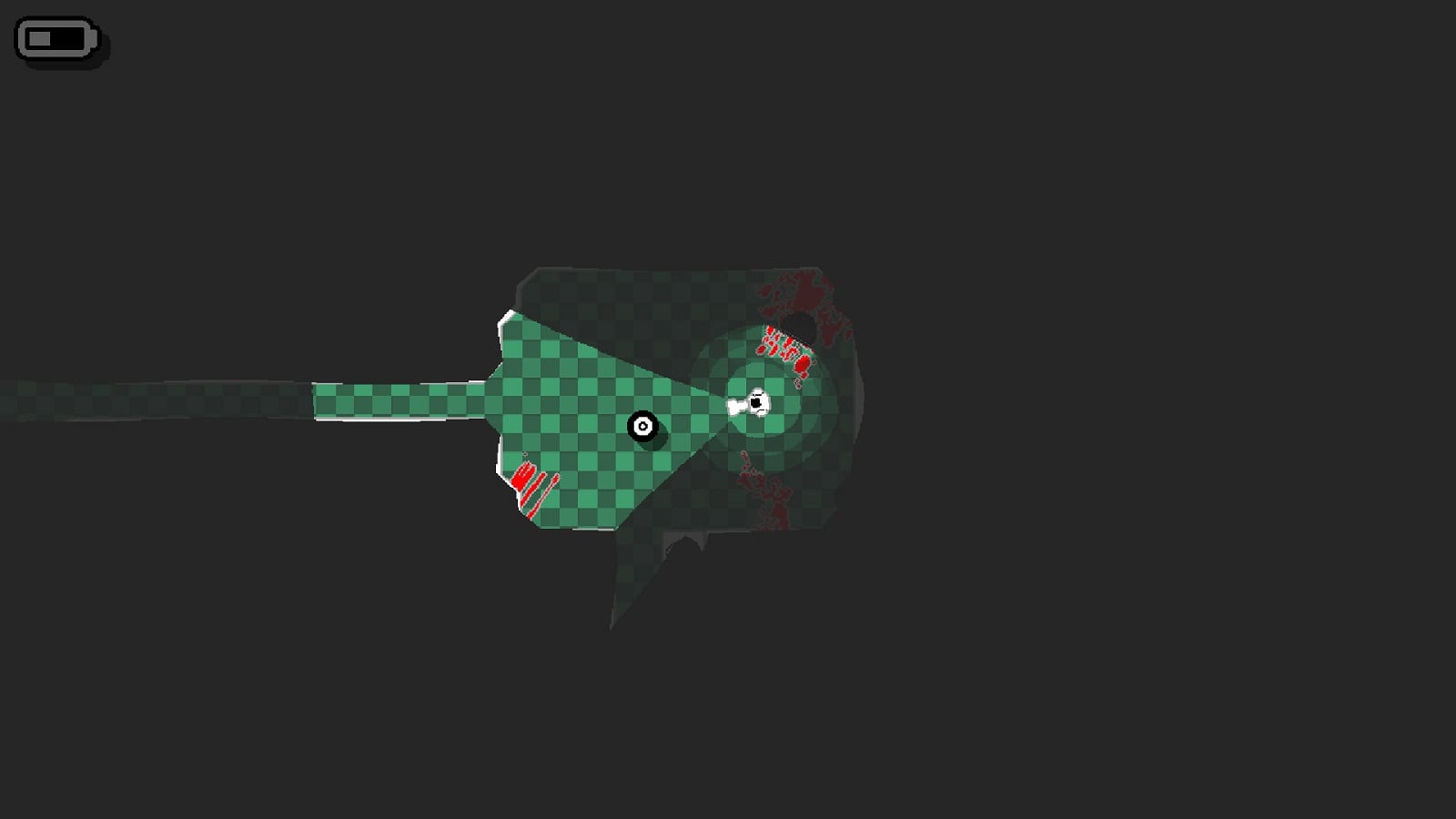 It’s October, which means spooky season! You know what that means: An indie horror game where you’re locked in a house with an unknown force chasing you, with only a flashlight to guide you down a number of different corridors. This reminds me of a cross between Ape Out and LIT, where you must use the flashlight you obtain halfway through in order to light up your exit. Couple this with some genuinely frightening ambiance and environmental storytelling (there are bits and pieces referencing a boy named Teddy and his father), and you’ve got a pretty scary title that’s a charming package and is one of the most worthwhile experiences here. 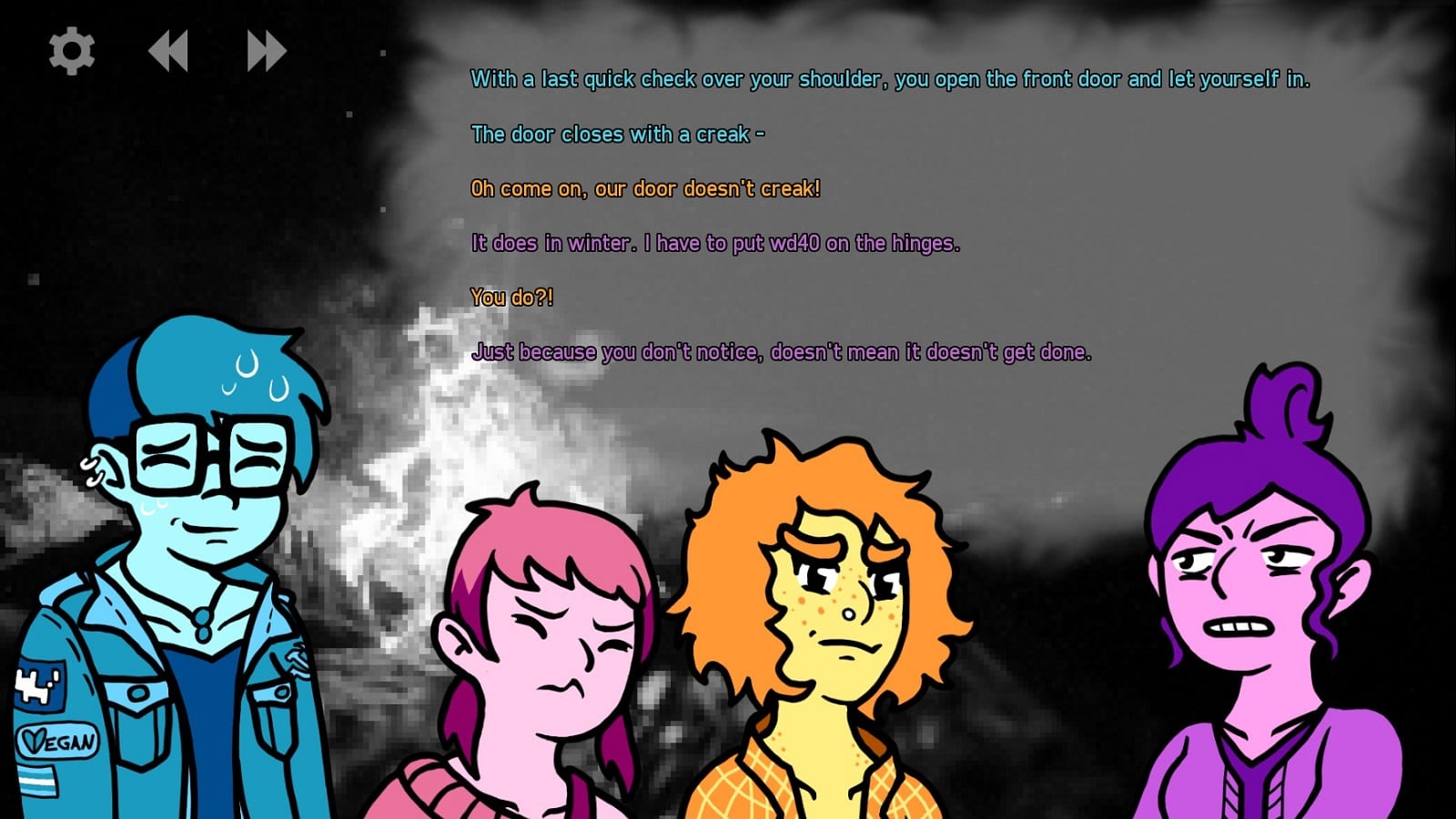 It’s October, which means spooky season! You know what that means: An indie visual novel where you start to tell a scary story to your friends, but they keep interrupting you in order to interject their own narratives. Do you go with a sweet romance, a stoner comedy, or an actually scary tale? Unlike Cover Me in Leaves, this one does have some choices and even multiple endings you can encounter, which makes it a little stronger than the former. I also like the cheeky banter between the characters; it’s just a shame it ends before it gets good.

My ranking, from most to least favorite:

So what’s my verdict on the 10mg collection? Put simply, the current output of games won’t revolutionize how you think about game length, but they are decently priced experiments for what they offer. I think the best games that work in this collection are the ones that have one mechanic which can be stretched out to the 10-20 minute mark. Something like Sealed Estate feels like an episode in a horror anthology with its wonderful pacing and shocking ending screens, and You are such a Soft and Round Kitten. made me smile every time I heard the UI shout “TO ANOTHER PLACE” or had to navigate around the error screens.

I think the 10 minute requirement is more limiting than anything else, which is exemplified with my least favorite experience, :), since there were plenty of times where I wanted to stay on one minigame but had to hurry to the next one for no adequate reason. It feels like a museum exhibit where everything’s rushed and while I want to stick around and tinker with one display, I have to quickly go to the next one with no thought.

The narrative visual novels also suffered from the 10-minute length concept. You can tell an engaging and gripping story in a half an hour television episode (or even a silly one in a 10 minute segment), but you’re going to have to make some concessions in order to do this. Games have an even higher hurdle to clear, because you have to tackle mechanics and establish gameplay AS WELL AS narrative significance.

This rings true with Locked In, which has an innovative mechanic, the two-player mode which requires both players to pay attention and press their own button to advance dialogue. Make the game an hour or two? You’ve got yourself a fleshed out dramatic story about the struggles of navigating a pandemic. Cut it down to 10 minutes? You’ll have to cut out some emotional flair and character-building moments. Cover Me in Leaves takes another approach and instead acts as an actual novel; however, the short length cuts off any emotional stakes with the protagonist because you don’t have time to connect with them.

That said, I quite enjoyed what I played of the 10mg Collection. Would I recommend the asking price of $10 for the bundle? Personally, for the first four games in my ranking alone, I’d say yes. It’s a variety of fun, experimental concepts that will pave the way for the next projects in this collective effort. Personally, I’d love to see more arcade-inspired score attack titles and games that can poke fun at the genre they’re representing. 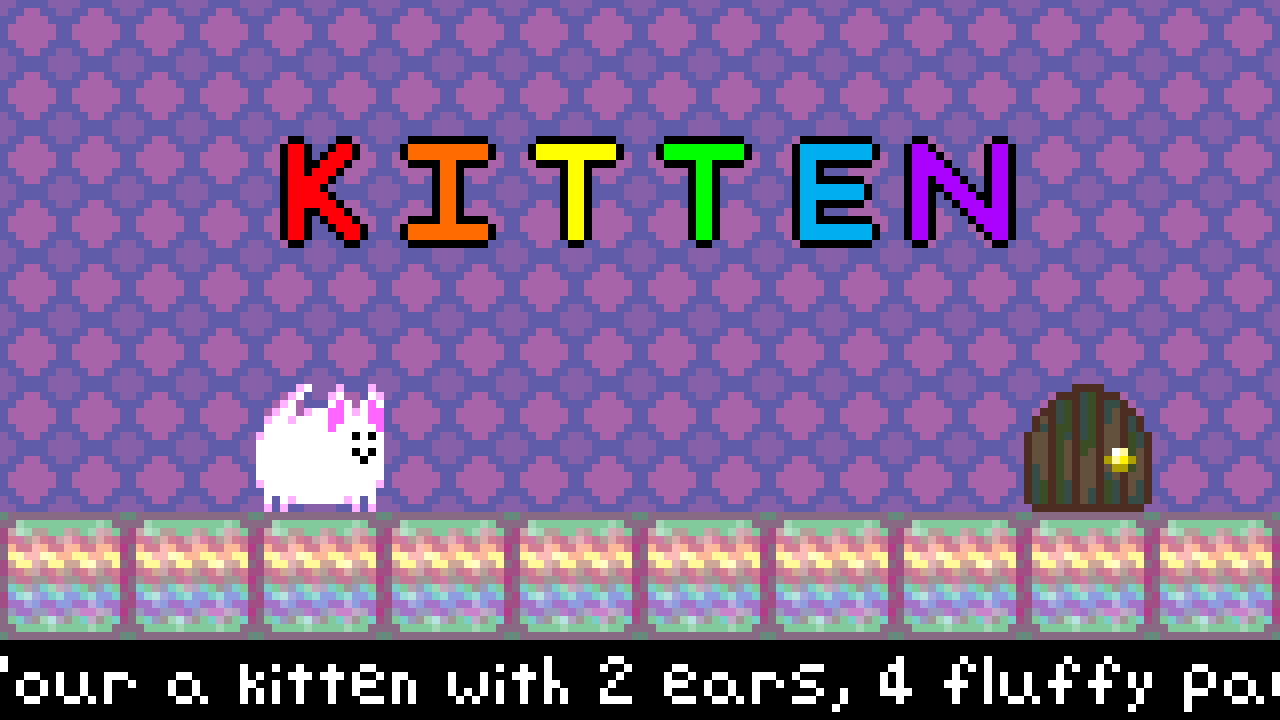 And we need a sequel to You are such a Soft and Round Kitten. Please.

Elisha Deogracias is an aspiring accountant by day, freelance writer by night. Before writing for Gaming Trend, he had a small gig on the now defunct Examiner. When not being a third wheel with his best friends on dates or yearning for some closure on Pushing Daisies, he's busy catching up on shonen manga and wacky rhythm games. Mains R.O.B. in Smash. Still doesn't know if he's a kid or a squid.
Related Articles: 10mg: :), 10mg: Always Down, 10mg: Cover Me in Leaves, 10mg: HANDMADEDEATHLABYRINTH issue.0, 10mg: Locked In, 10mg: Sealed Estate, 10mg: SLASHER Interrupted, 10mg: Stroke, 10mg: You are such a Soft and Round Kitten., Indies
Share
Tweet
Share
Submit