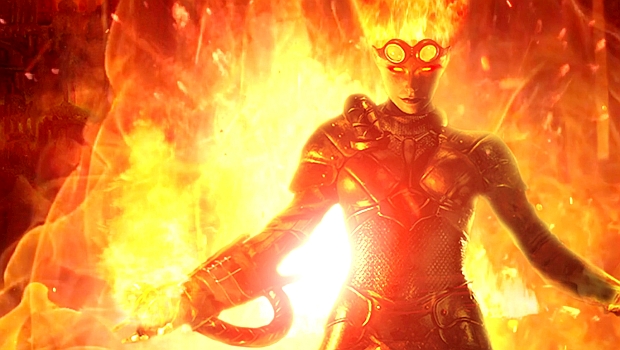 For definitions on formats and archetypes referenced in this article, go to Issue 1, The Mana Curve – Magic: The Gathering for Casual Players

How was your first tournament? Exhilarating and frustrating, if it was anything like mine. I went into a local Vintage event thinking I might actually have a decent deck. I was lucky to win against a 10-year-old in my first match and that was the highlight! If you played the tribal Soldiers deck from last month’s article you probably split your matches or came up just shy on a couple you could have won with better luck. That’s how it goes with budget tribal. Those decks are built around synergies, and if you draw well you can win. If not, time to build a new deck!

Deck building is equal parts science and art, and with eighteen thousand unique Magic cards it would take six times the age of the universe to play every possible deck combination.

Did you believe that? Acting!

Building a deck that is playable and has a chance to win tournaments is hard. It takes months of practice and a dedicated effort learning about cards. Reading articles like this one is just the beginning, a launch point to a heightened understanding of the meta.

Uh, hold up. What’s a meta? Meta describes the predominant deck types being played. Your local meta is simply what your friends at the store downtown are playing. But it also refers to the most common decks in a given format based on sanctioned tournament play. Standard is currently dominated by aggro decks with over sixty percent of builds on the pro tour. That’s a good indicator of what you could be up against in your local tournaments as well, as many players will copy deck lists off the Internet.

There is absolutely nothing wrong with copying a deck list, purchasing specific card singles and showing up to play with someone else’s great idea. Imitation is the sincerest form of flattery and all that jive. Seriously, have a look online for the “Top 8” Magic decks; it’s a surprisingly repetitive list. All those thousands of cards and the pros are consistently playing maybe two hundred consistently. Aether Hub, a land that makes energy counters, gets played in almost every match.

What does that mean for you and me, casual players who don’t want to spend $300+ on a single deck that will cycle out of the format in a couple years anyway? Before I answer, let’s take a closer look at one of the most common Standard decks and break it down. The top decks in Standard right now are energy-based, and that keyword is beyond my pay grade. Luckily, near the top we also see Mono Black Zombies:

Chris Hardwick, eat your heart out. Or we’ll find a zombie to do it for you.

What does this deck do? Make zombies, duh! Then it makes zombies bigger, more difficult to block, and then sacrifice to make one of the biggest, baddest creatures in all of Magic: Ormendahl, Profane Prince. It also wrecks other creature-based aggro decks. In short, it is an ideal deck for the current Standard meta.

Digging deeper, we start with 24 lands. 40% has long been the magic ratio (that’s punny!) for competitive Standard decks. In this deck, that is more than enough to fuel the mana curve, but we stay with 24 to avoid being land-screwed in any game. You want to open with two or three swamps in hand. Then you only need to draw two more to be able to cast any card in your deck. Drawing land after five is ok because the Ifnir Deadlands offer modest creature removal when sacrificed.

Cryptbreaker’s first ability is a red herring unless you’re up against control in your first game before sideboarding, when you might discard your copious creature removal. The second ability is money because it does not require the card to be tapped, meaning you can meet the condition of tapping three other zombies you control to draw a card multiple times. At the rate this deck makes zombies, and with two or three Cryptbreakers on the battlefield, you should be drawing 2-4 additional cards every turn! You know how you ran out of cards in that soldier deck from last month? Not gonna happen here. Incredibly efficient one-drop and one of the big engines powering the deck.

Diregraf Colossus makes a 2/2 zombie creature token every time you cast another zombie spell, which should be at least one each turn, and probably more. By turn four you could cast Diregraf Colossus, Cryptbreaker and Dread Wanderer and put two additional 2/2 zombies on the battlefield. That’s five great creatures for only four mana! Again, super efficient card. And you don’t even care if it dies because you can pull it out of the graveyard with Relentless Dead and the next time you cast the Colossus it will be even more powerful due to its first ability.

Dread Wanderer hits the battlefield tapped but a 2/1 for one mana in black in Standard and zombie tribal—oh right, this is the only such card. Three mana to activate graveyard recursion is not too useful in this deck because you have Relentless Dead, but on the unlikely chance you get a bad draw it’s playable. Worst case scenario you drop this for 1 black mana with the Colossus on the battlefield and get a pair of two-power zombies.

Kalitas, Traitor of Ghet eats your opponent’s dead creatures and craps out zombie creature tokens. This is particularly effective against the bulk of the Standard meta playing aggro energy decks. You’re going to have plenty of targets for your removal spells and Kalitas is happy to grind them into creature tokens for you. Mid-game, when your board is lousy with zombies, you can activate Kalitas’ second ability, pump him, and actually feel confident advancing him into combat.

Relentless Dead is simply one of the best cards in Standard. Two black mana gives you a 2/2 with menace that bounces back to your hand when it dies for the price of one black mana. Cast it, get your bonus 2/2 zombie token for Diregraf Colossus, then on your next turn tap it and two other zombies to draw an additional card, then sacrifice it to pump Kalitas, bounce it back to your hand and cast it again. Repeat. As if that weren’t awesome enough, it basically has Resurrection as an activated ability when it dies. Relentless Dead is ridiculous; it’s almost broken in zombie tribal and the price is certain to keep going up. A set will run you $50 today but that will be a bargain once this cycles out.

Dark Salvation, Fatal Push, and Grasp of Darkness are all reasonably efficient creature removal, feeding Kalitas while performing the helpful service of cleaning your opponent’s board of all those cluttersome creature cards. Oh look, where did his threats go?

Liliana’s Mastery pumps all your zombies +1/+1 and creates additional zombie creature tokens each turn. The deck’s highest CMC card, it’s a candidate for sideboarding game two. I don’t think I could run a mono black deck without a Liliana planeswalker, and Liliana, the Last Hope fits very nicely in this list. Her +1 will likely kill an opponent’s creature and her -2 is automatic graveyard recursion. If you get her ultimate in this deck your opponent will probably start looking for ways to suck out the clock on the match.

The two absolute stars in this deck are Cryptbreaker and Relentless Dead. If your opponent is running control try to get them to burn their counter on something else, but as long as your creatures are not exiled you can always bring them back!

This deck is stacked full of synergy, with effective removal against other aggro decks. However, it does have a couple weaknesses. Foremost, the popular energy decks have flying so if it gets to combat you’ll just have to suck damage. Keep removal in hand for this possibility. Another popular play is to sideboard in Skysovereign, Consul Flagship for support against flyers. There are some pesky control decks in the meta but you can sideboard Transgress the Mind to weed out potential counter spells from your opponent’s hand. The other significant problem is that you’re playing mono-black, so you may be mana constrained, especially if you’re abusing activated abilities. There’s not much to do about that outside of sideboarding something like Sifter of Skulls, which doesn’t synergize well with the main deck and mucks up your board state. I might keep a set of them in the box to experiment with.

On many levels this is an outstanding deck. It is a proven tournament winner and is accessible for novice and expert deck pilots alike. As early as turn two you can have significant threat on the board and cards in hand to start your zombie replication engine. In a word, it is efficient.

At $250 it is even one of the least-expensive competitive Standard deck lists and if you sub out the two Liliana planeswalkers from your mainboard and sideboard you can cut the total cost down under $200. That is still a lot of money, but it is not a lot of money for a competitive professional deck that is fun to play in any setting. There’s one big catch to this deck: because Standard cycles older sets out of the format to make way for new releases, half this deck is about to cycle out of Standard this fall. At least you’ll still have a good Modern deck!

Alternatively, you could buy a box as each new set comes out. If you’re going to be serious about Standard you need to buy a lot of cards. This not such a bad investment. 450 cards gives you a wide array of deck building options. Even if you don’t hit on the mythic rare that defines the release, you will still get thirty rares and loads of quality cards. There is no better way to practice deck building than to start with a box from a new set that the pros haven’t figured out yet.

Mike is a journeyman musician, writer and amateur astronomer who makes a living as a data engineer in Port Angeles, WA. Mike is also a hopelessly obsessed but very marginal player of Magic: the Gathering.
Related Articles: Magic: The Gathering, Tabletop
Share
Tweet
Share
Submit