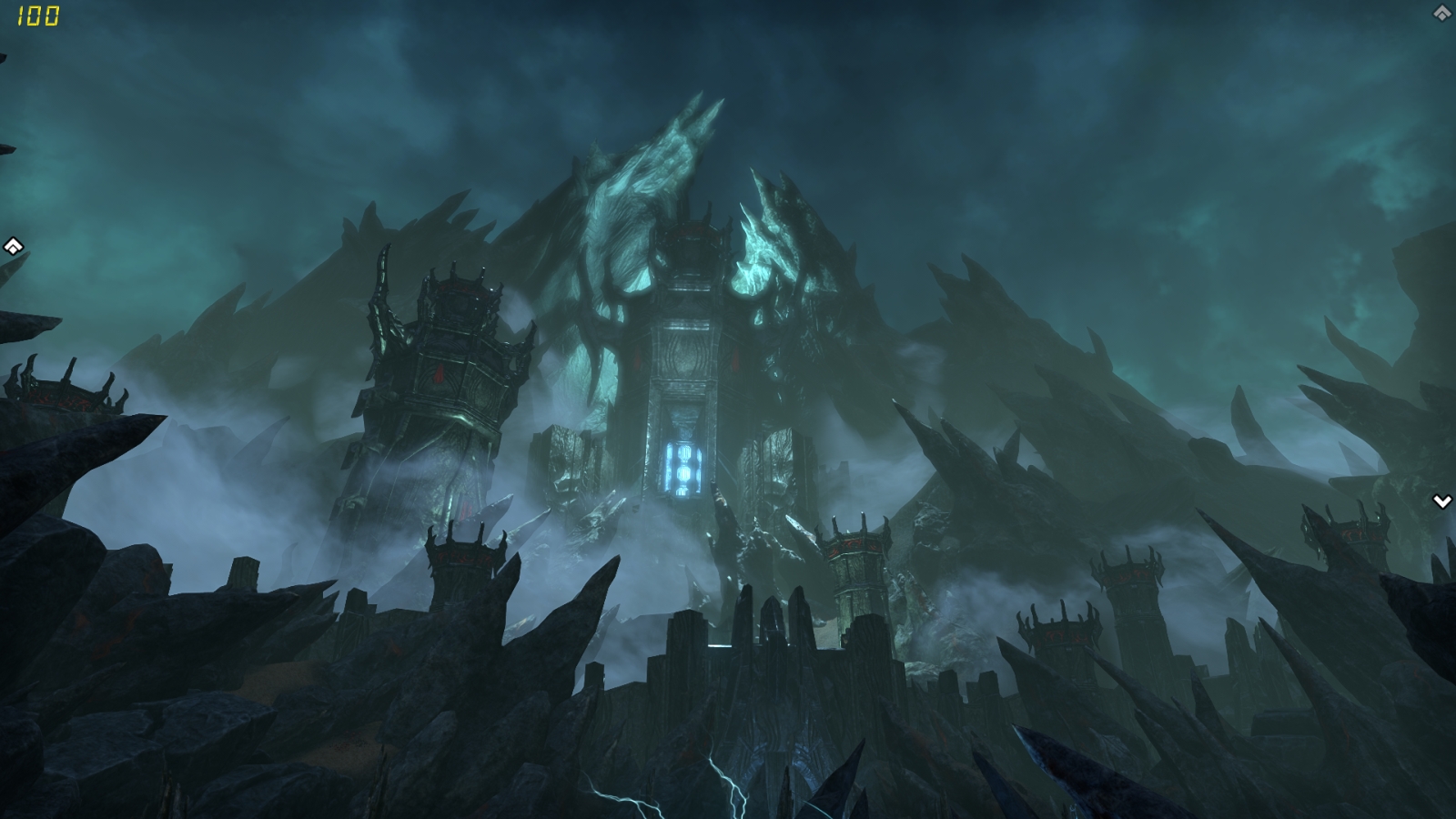 As we get ready to say farewell to 2021 and the year-long Gates of Oblivion events, I just wanted to check in and share my thoughts. I hold The Elder Scrolls Online in the highest regard, in my opinion it’s the premier MMO on the market for a number of reasons, as you can see in just about any of my past reviews or interviews with their team. This particular year was no different, and I thoroughly enjoyed the storylines, quests, and adventures I had in Blackwood, Fargrave, and the Deadlands.

The main story throughout this whole year has been about Mehrunes Dagon and revisiting Oblivion. Without too many spoilers, we went on a hell of an adventure with Eveli Sharp-Arrow and the ever suspicious Lyranth that unraveled who the Ambitions were, which eventually led us to the city of Fargrave with the Deadlands DLC. 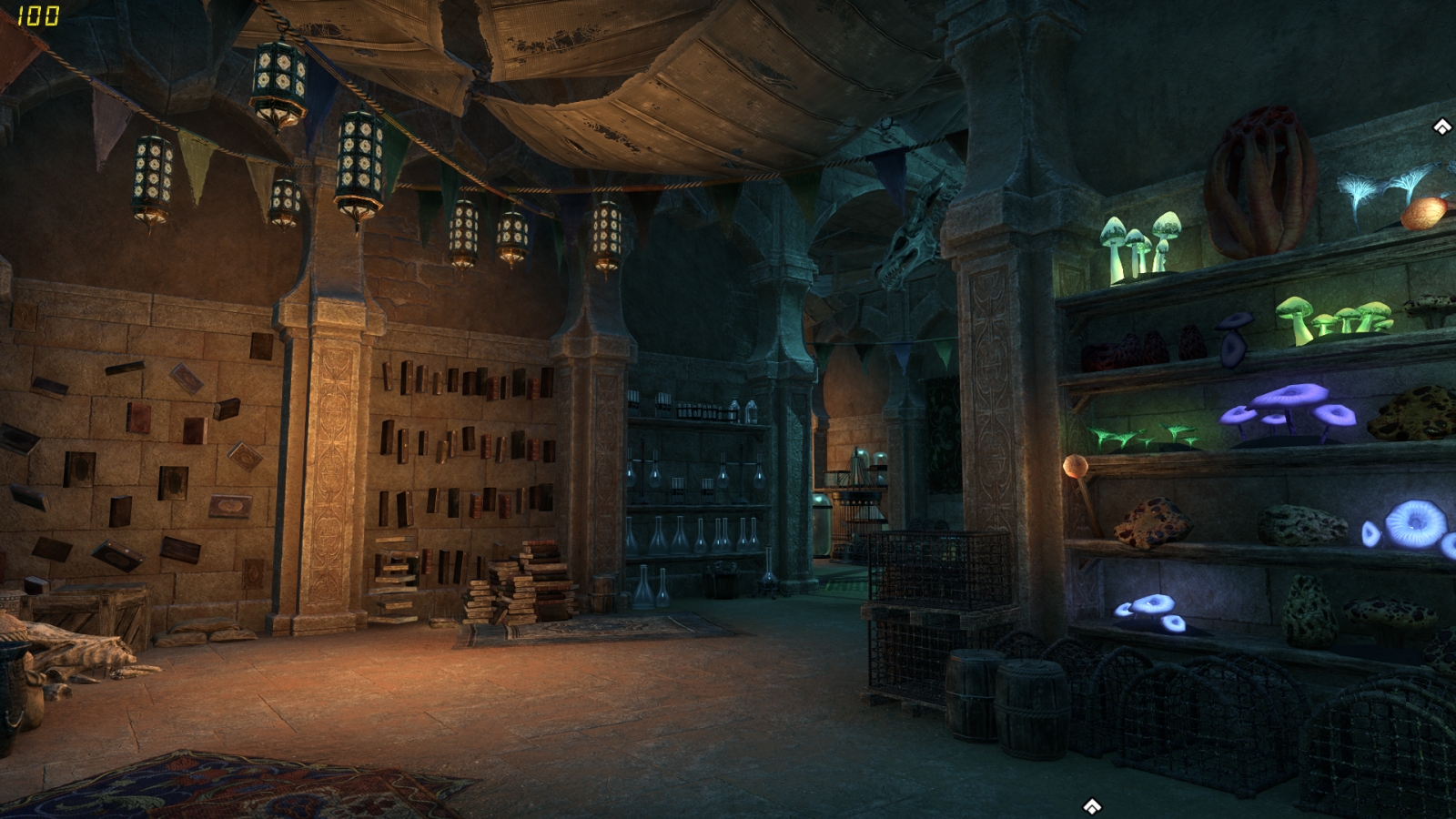 Words can’t describe how fantastic Fargrave looks! One of the coolest cities in ANY game I have played.

I’d first like to touch on just how fantastic Fargrave looks. I was literally blown away by the ambiance and layout of the city. I played through this DLC with my mom, who is 75 years old and loves ESO, and both of us just could not stop commenting and being amazed every single time we walked back into Fargrave. As a demi-plane of Oblivion that serves as kind of a crossroads between Nirn and Oblivion, a lot of crazy stuff can happen here. It kind of reminded me of Diagon Alley from Harry Potter in a way – there are a lot of alleyways with traders, mysterious potions, and gizmos at every turn. Magic casters toss fire between their hands, and books fly on their own in mesmerizing patterns. The sky is a darker version of the aurora borealis, and beneath it mortals freely interact with Daedra in both trade and pleasure. 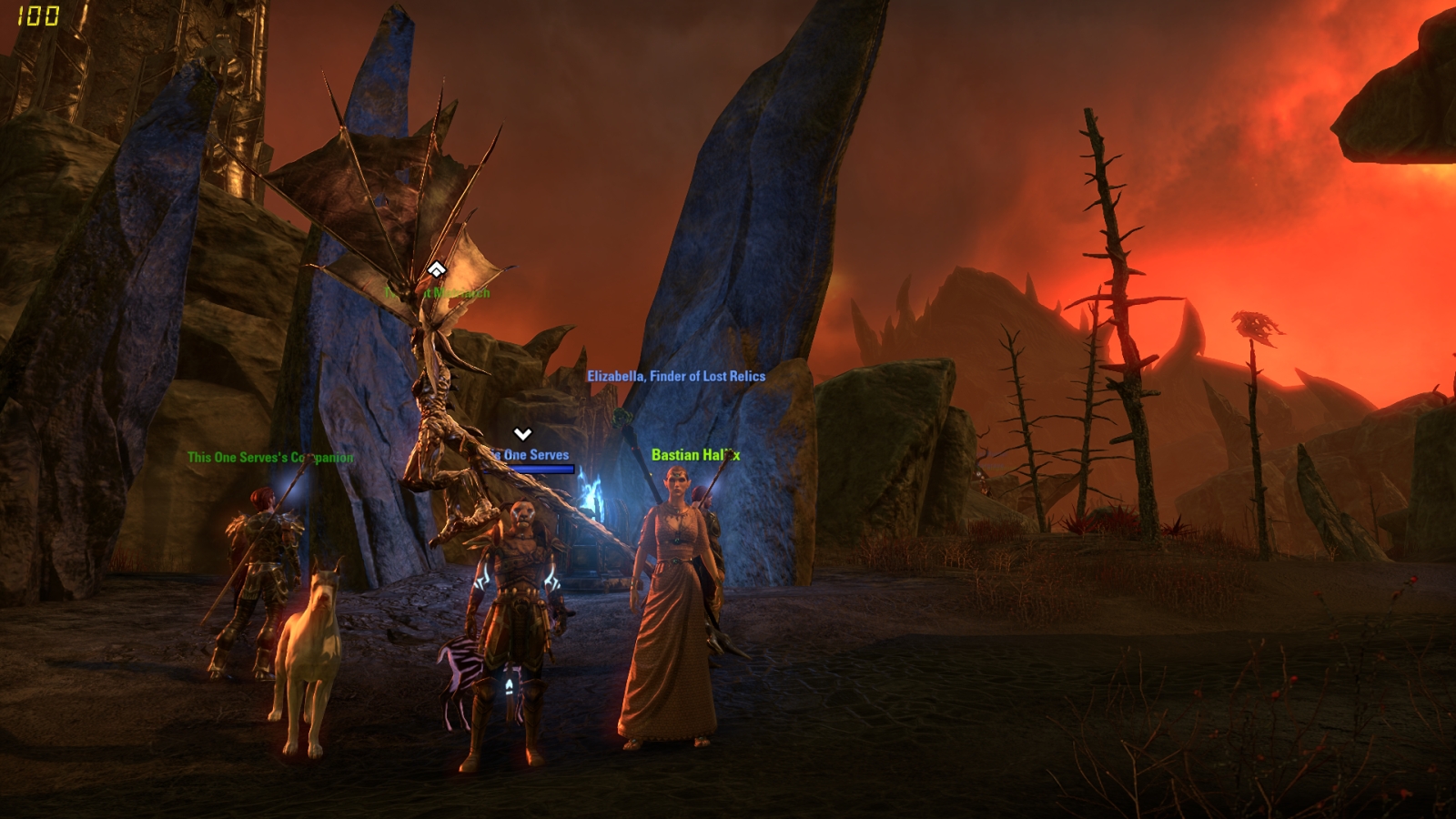 My 75 year old mom plays ESO with me, and we had SO much fun playing through the Deadlands!

The person of interest who makes things happen in the city appears to be Madam Whim, a Dark Seducer who is very persuasive and manipulative. She only shares information at a cost, which is only hinted at throughout your interactions with her, as she trades us several “favors” for said information because of who our powerful friends are. Her inn, aptly named The House of Whims, is the main hub which you do business out of in the Deadlands DLC.

Upon arriving in Fargrave you are introduced to The Anchorite, one of the two main characters that will be accompanying you on the journey. She wears a mask and won’t reveal her identity, but it is clear from the start that she wants to help the city of Fargrave from attacks, and before long she is by your side. As time goes on, you find out more and more about who she is, with a real bomb that’s dropped towards the end of the questline that I did NOT see coming. A totally likeable character in the ESO world, I really hope that we get to see more of her in the future. 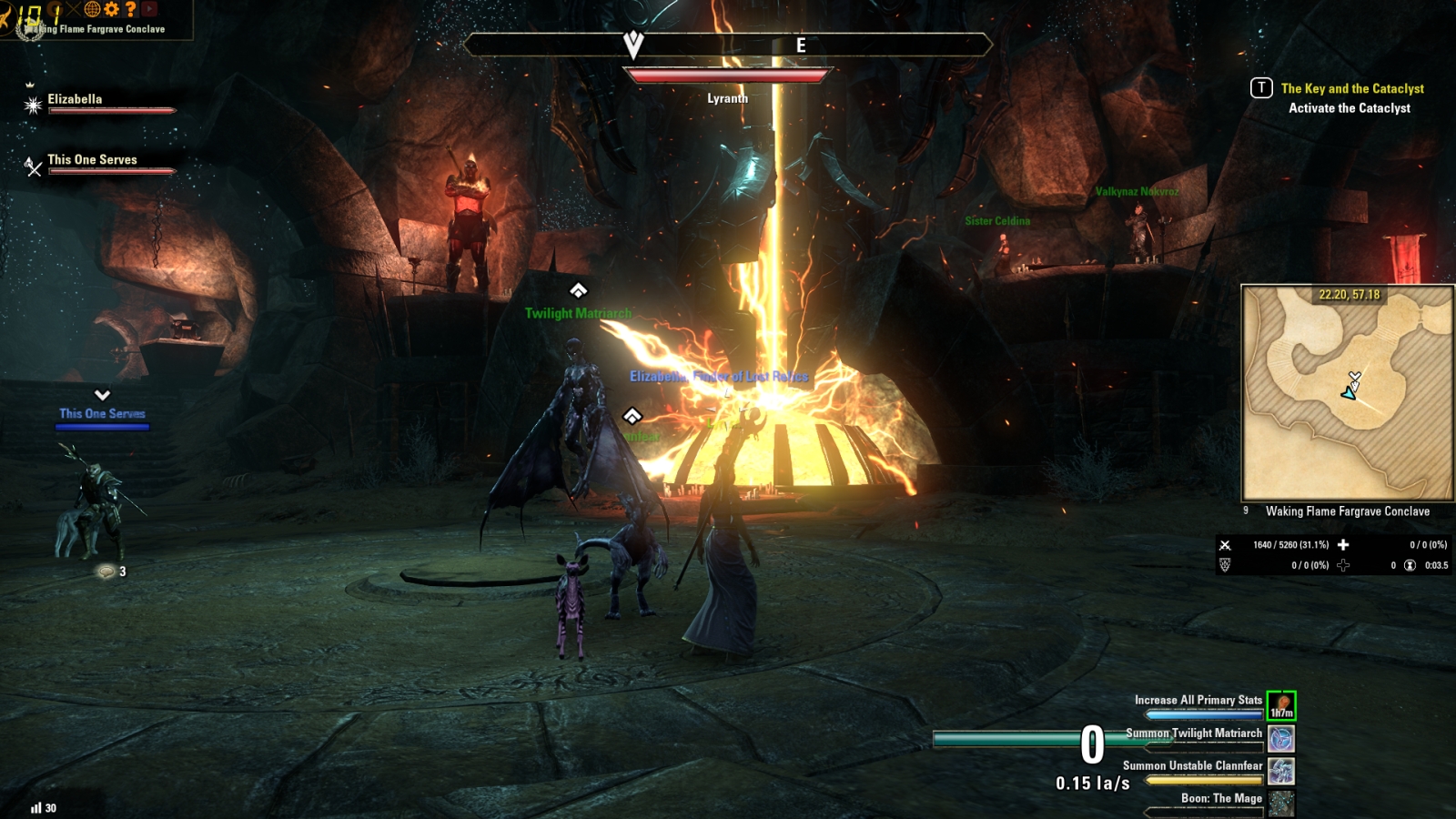 My mom and I throwing a wrench in Sister Celdina’s plans! Really fun battle, and such a great story!

Our immediate goal is to stop the city from being attacked, and we’re introduced to the villains of the story fairly quickly. Sister Celdina is part of the Order of the Waking Flame, who recently got a promotion after her predecessor “died” and she is pretty motivated under the instructions of Mehrunes Dagon to create Catalysts to bring forth Incarnates. Her partner Valkynaz Nokvroz is the new overseer of an area called the Blood Pit, and it’s clear there is tension and contempt between them from the start. The whole Deadlands main story questline revolves around chasing these guys down for the most part, with some serious twists along the way. 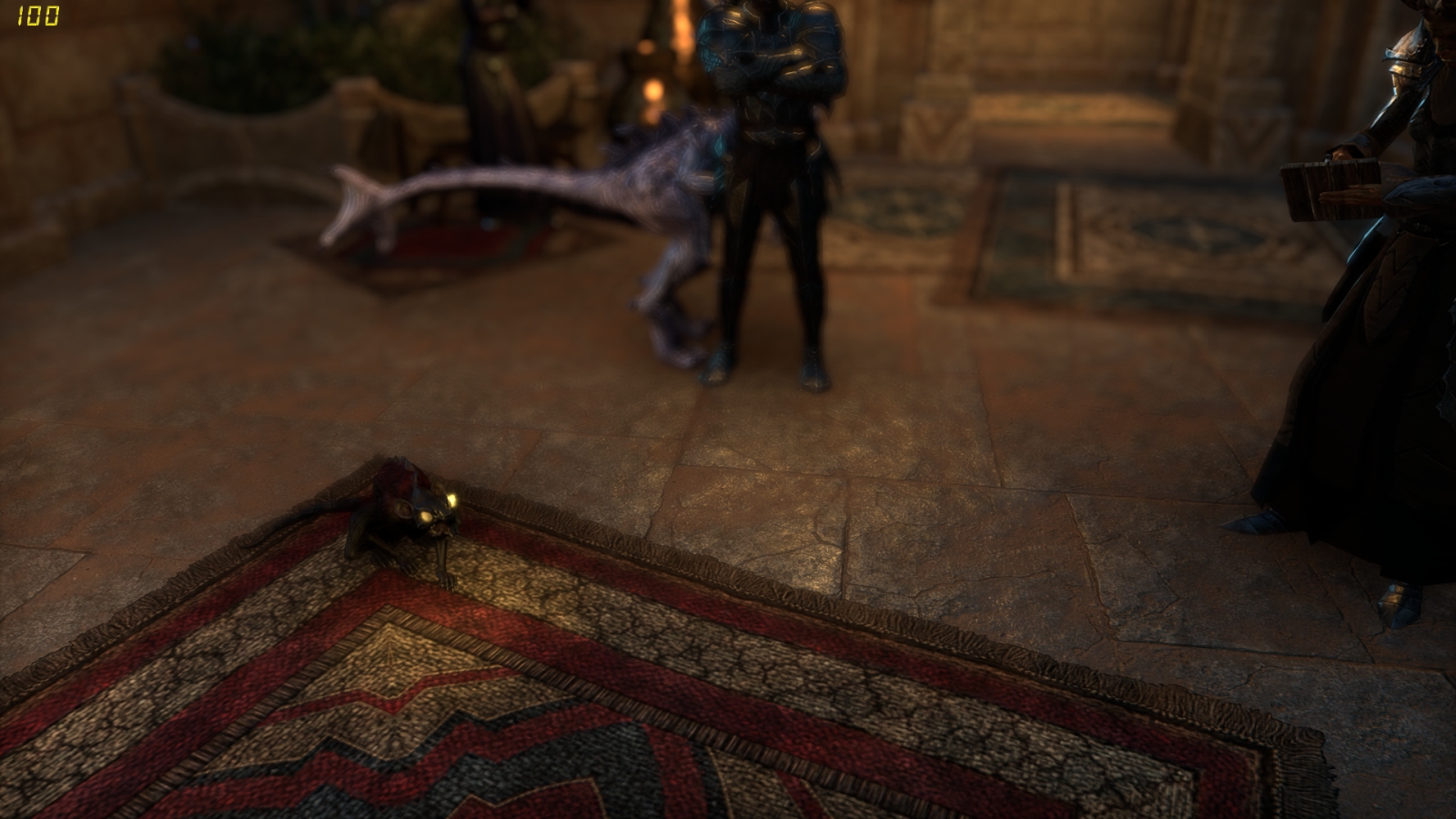 Look at Arox the Mutilator! He is so tiny and adorable and FULL of rage!

But let’s be real here, anyone who has played through the Deadlands knows who the real hero of the story is: Arox the Mutilator. When you first meet Arox, he is in the form of a Daedrat…a really pissed off Daedrat who was cursed by Nokvroz when he challenged him as ruler of the Blood Pit instead of killing him, something that Arox finds without honor. Arox has a HUGE chip on his shoulder and wants Nokvroz dead at all costs. After rescuing him from a prison of sorts, he becomes your faithful and ever angry ally, vowing to destroy anything and anyone in his path to vengeance. He is absolutely hilarious and was my favorite part of the entire year-long Gates of Oblivion event. I am thrilled to see we will be able to purchase him as a houseguest via the Crown Store!

The Deadlands themselves look every bit like you might imagine. Desolate, hot, depressing. A sense of ever increasing fear and hopelessness. Certain parts have lightning that constantly strikes the ground, and there was a really fun quest where you had to run through a gauntlet of lightning staying within a shield to protect you. 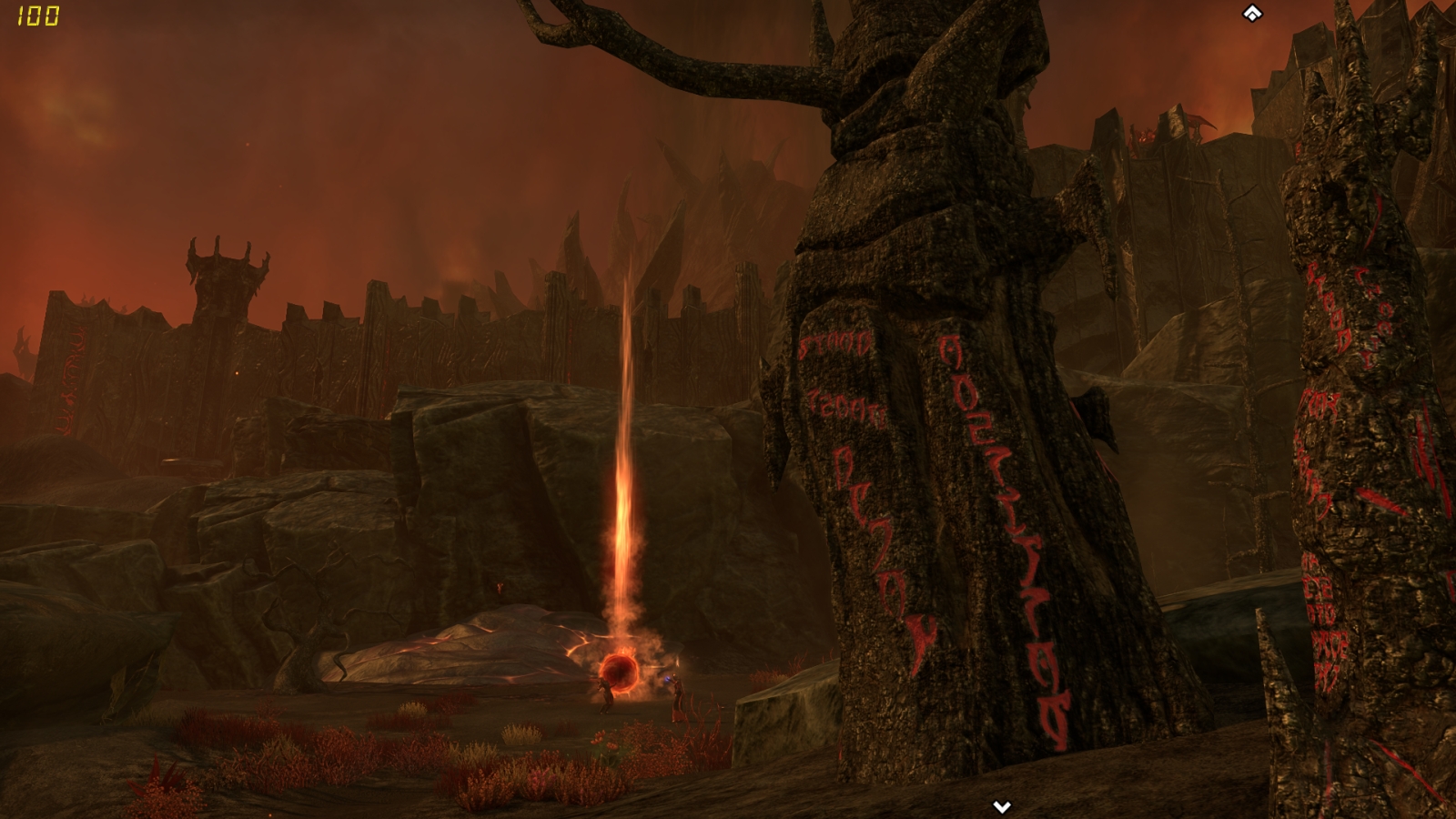 The grim and depressing landscape of the Deadlands.

The ending of the main story in Deadlands was quite satisfying, but if I have one thing to gripe about it’s that both of the main villains went down without much effort. They were made out to be super tough, and honestly some of the fights to get to them were harder than they were. Nonetheless, I really enjoyed everything about the DLC, and the entire Gates of Oblivion event.

Something else that I’d like to mention is how amazing the voice acting is and continues to be. A side character named Rynkyus was fantastically voiced, as well as Arox the Mutilator. Madam Whim is sassy, seductive, and nasty all at the same time, and Lyranth is…well, Lyranth. ESO is the whole package when it comes to immersion; the voice acting, the ambiance of the zones, the music, and the story. They always do such a great job, and I feel like a lot of the time the voice actors and composers go unnoticed, so I always like to give a shout out. 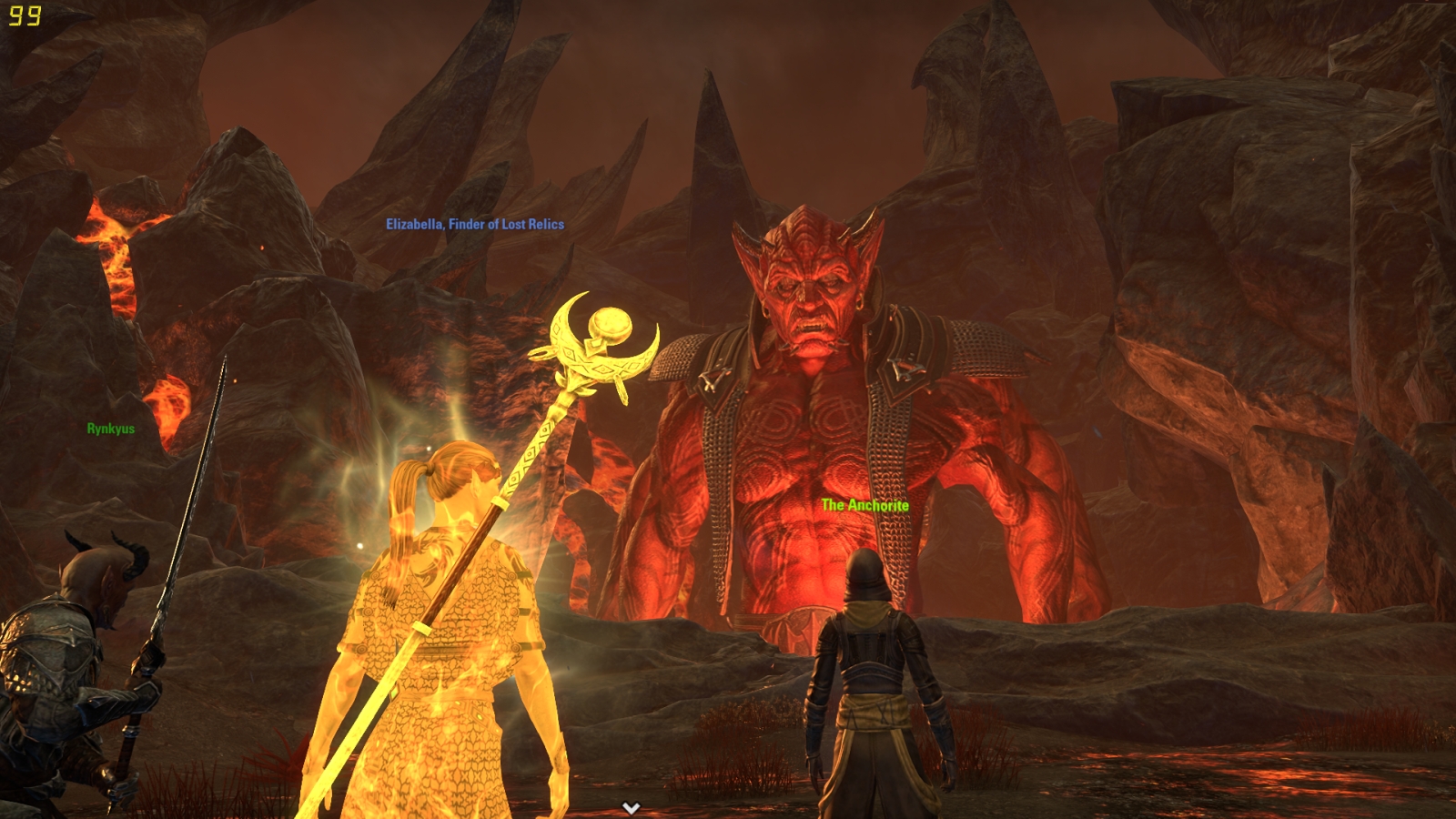 A final showdown with big daddy himself, Mehrunes Dagon!

I truly can’t wait to see what we have coming up next year. I am super pumped that I was able to get my mom into ESO, after 13 years of playing Lord of the Rings Online she finally decided to take my advice on how good of a game The Elder Scrolls Online is. She installed ESO and hasn’t looked back since. I had a blast playing through the Deadlands with her, and really enjoyed every moment of Blackwood and The Gates of Oblivion year long event.

Holly Hudspeth is a best-selling author living in Fort Worth, Texas. She has six published novels to date; The Skyy Huntington Series, which is an epic dark fantasy adventure, and One Small Detail, a stand-alone medieval fantasy. Holly also enjoys writing fan fiction based on her avatars from games such as EverQuest, Elder Scrolls Online, and World of Warcraft. Her first major purchase at the established age of nine was the NES, and she has been gaming ever since. She enjoys fantasy games, city builders, RPGs, MMOs, SMITE, and The Sims franchise. Most nights she is in SMITE with her husband and friends, or playing ESO. When she isn't gaming, she is probably either at Disney or planning her next trip there.
Related Articles: The Elder Scrolls Online: Blackwood, The Elder Scrolls Online: Deadlands
Share
Tweet
Share
Submit