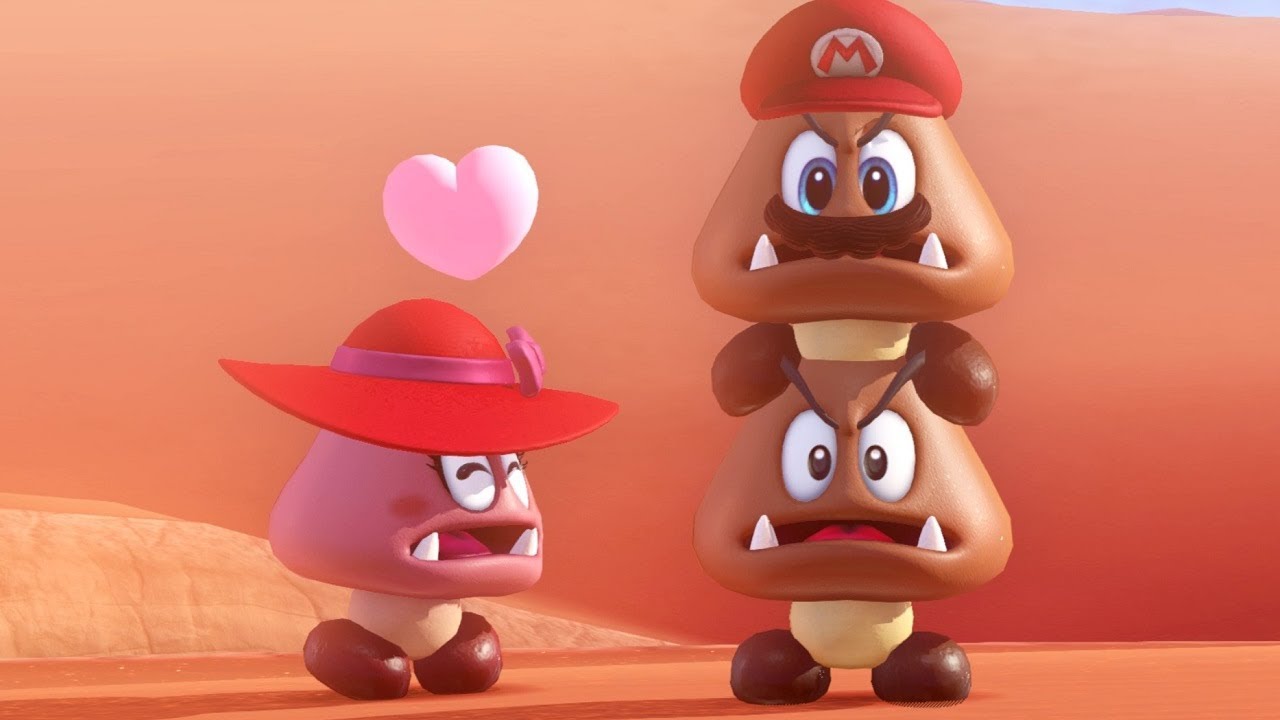 I have been playing Super Mario Odyssey regularly since its release last month, and I have yet to grow tired of the seemingly endless hunt for Power Moons. The longer I play, the more interesting the puzzles and obstacles seem to become. I especially appreciate each Kingdom’s Goombette puzzles; but as I have come across more of these encounters, I have grown increasingly disturbed by the dark, twisted implications behind them.

Super Mario Odyssey is a phenomenal platformer brimming with purple coins and Power Moons to be found and collected. While some Moons are awarded after defeating bosses—and others are just lying around, almost unimportantly—there is always one in each Kingdom held by Goombette, a feminine pink Goomba in a large summer hat. The trouble is Goombette seems terrified of Mario and will rush off into thin air at the sight of him.

In order to attain the Moon she holds, one must Capture one or more Goombas and make their way towards Goombette. Ostensibly overcome with infatuation at the sight of a strapping young mushroom-shaped lad, Goombette then relinquishes a Moon to Mario in disguise.

It initially comes off as quite romantic; decades of squashing Goombas can have a sick, masochistic way of endearing one to the grumpy little dudes, so it’s nice to see them find true love in this war of violent ground-pounds and mind-control. But the charm wore off once I made a more keen observation of what was actually happening in these scenarios.

Picture this from Goombette’s perspective: you’re sitting around, enjoying the sun with your sun hat on, wondering if perhaps you’ll be noticed by some handsome young shroom. News of a short Italian guy out on a murder spree keeps you on edge, but you can’t help feeling that today might hold the fortuitous meeting of you and your true love.

Then, to your pleasant surprise, you see not one, not two, but seven Goombas approaching you, all stacked on top of each other in some absurd, quasi-phallic display of masculinity. Overwhelmed by your sudden popularity, you offer your affection completely to these suitors, accompanied by a fanfare of heart bubbles and rosy firework animations (we’ll just ignore the possible sexual implications here). To complete this bizarre ritual, you offer your Power Moon (again, ignoring) as a token of your gratitude.

Suddenly, a figure pops out of the top Goomba and snatches the Moon you just offered in the name of love! To your horror, you realize that it’s the mustachioed serial killer who has seemingly possessed your suitors. You flee, but not before watching the maniac stomp on two of those fine young men. You imagine they’re all dead, now.

Imagine having just seen this—contending with the knowledge that those Goombas never meant to approach you, that it was all just a ploy by Mario to steal away your Power Moon. Mario played to your vanity, knowing that, by enslaving others, he could get what he wanted from you. And you, afraid for your life, could do nothing but watch in horror, then run, leaving seven souls and your dignity behind.

Messed up, Nintendo. Messed up!