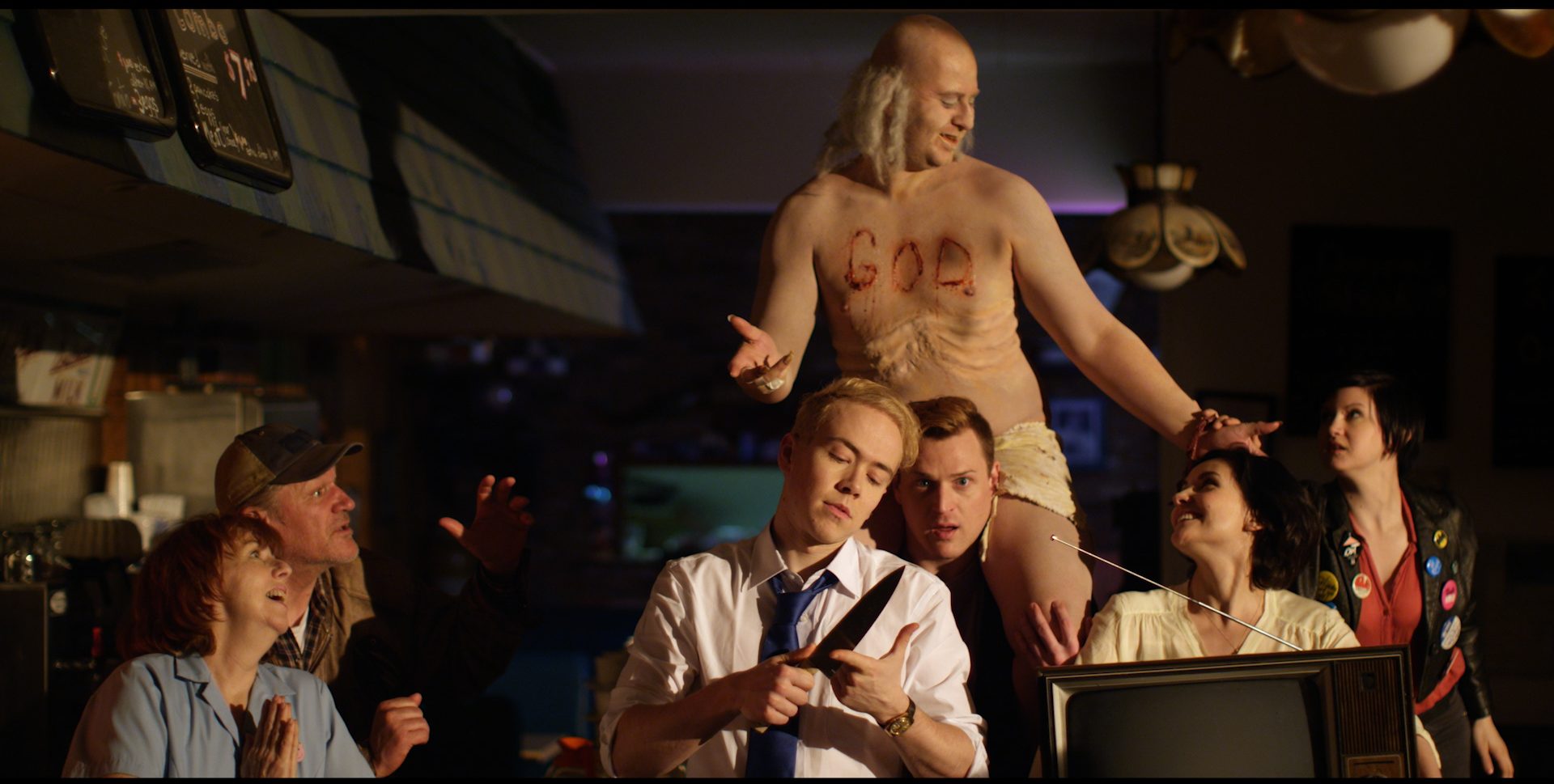 Well before Neil Gaiman’s nightmarish fantasy comic was adapted by Netflix, recent film school graduates set out to adapt the source material in all its beautiful and horrific glory. This was back in the days when Joseph Gorden Levvit’s failed film adaptation was an early rumor, when Nicholas Brown and Evan Henderson took the infamous Diner Scene and brought it to screen while hewing close to the visuals and themes that made Sandman stand out to its fans. Grotesque, evocative, and heartfelt, 24 Hour Diner shows us a brief but powerful glimpse into what a filmed Sandman could feel like if it strove to bring all of the comic’s strengths to the fore, without changing or updating its core identity. 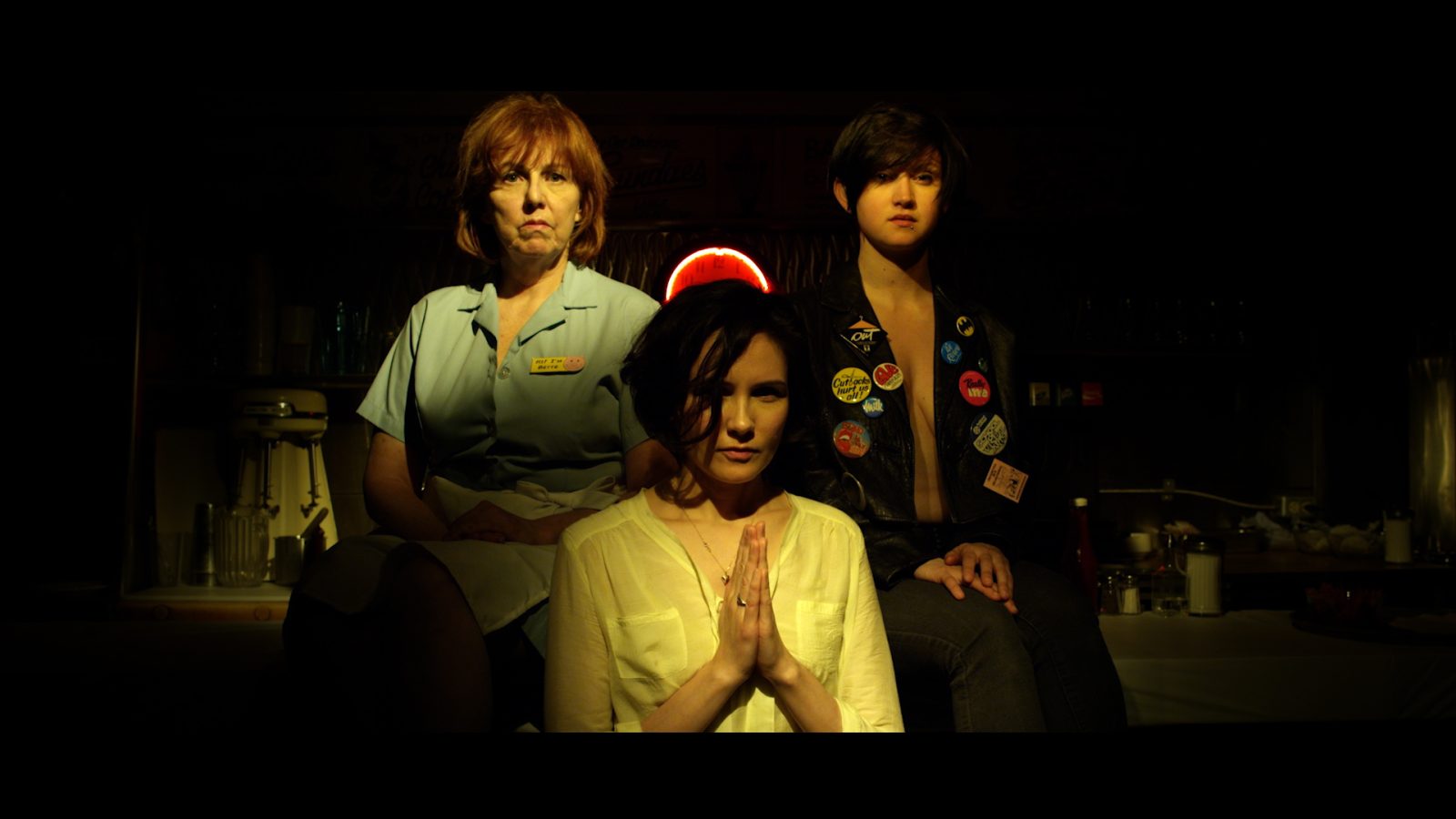 That comment is not meant as a slight against the Netflix adaptation, which (under Gaiman’s eye) took a dramatic departure from Sandman’s visuals and scripts when taking the story from comic to small screen. 24 Hour Diner is more of a direct translation; its cinematography is lifted directly from the framing of the comics, with many props due to Richard Liani for lifting these scenes so directly and keeping the work consistent. Comic books and films are different media, but the change does not hold 24 Hour Diner back. Rather, any of the unorthodox framing or camera movements help to sell the fever-dream quality inherent to this story of manipulation and violent excess. If something feels wrong with this movie, it feels so in direct coordination with the similarly unsettling content of the script. None of that is to mention the colors, which retain the comic’s pastel vibrance rather than Netflix’s muted, “modern” updating of the tale.

Fans of the source material, recent film graduates Evan and Nick wanted to create something to showcase their talents while showing respect to Sandman’s monumental impact on comic history. In a theme readers of this series will recognize, they knew it would take something special to stand out in the oft-ignored field of independent Canadian films. Part of the point was rising to the challenge of filming something that had famously been scoffed at for being unadaptable. The project took a few years and $65,000 to complete, with many fraught nights going into the filming of a wholly unorthodox short film. 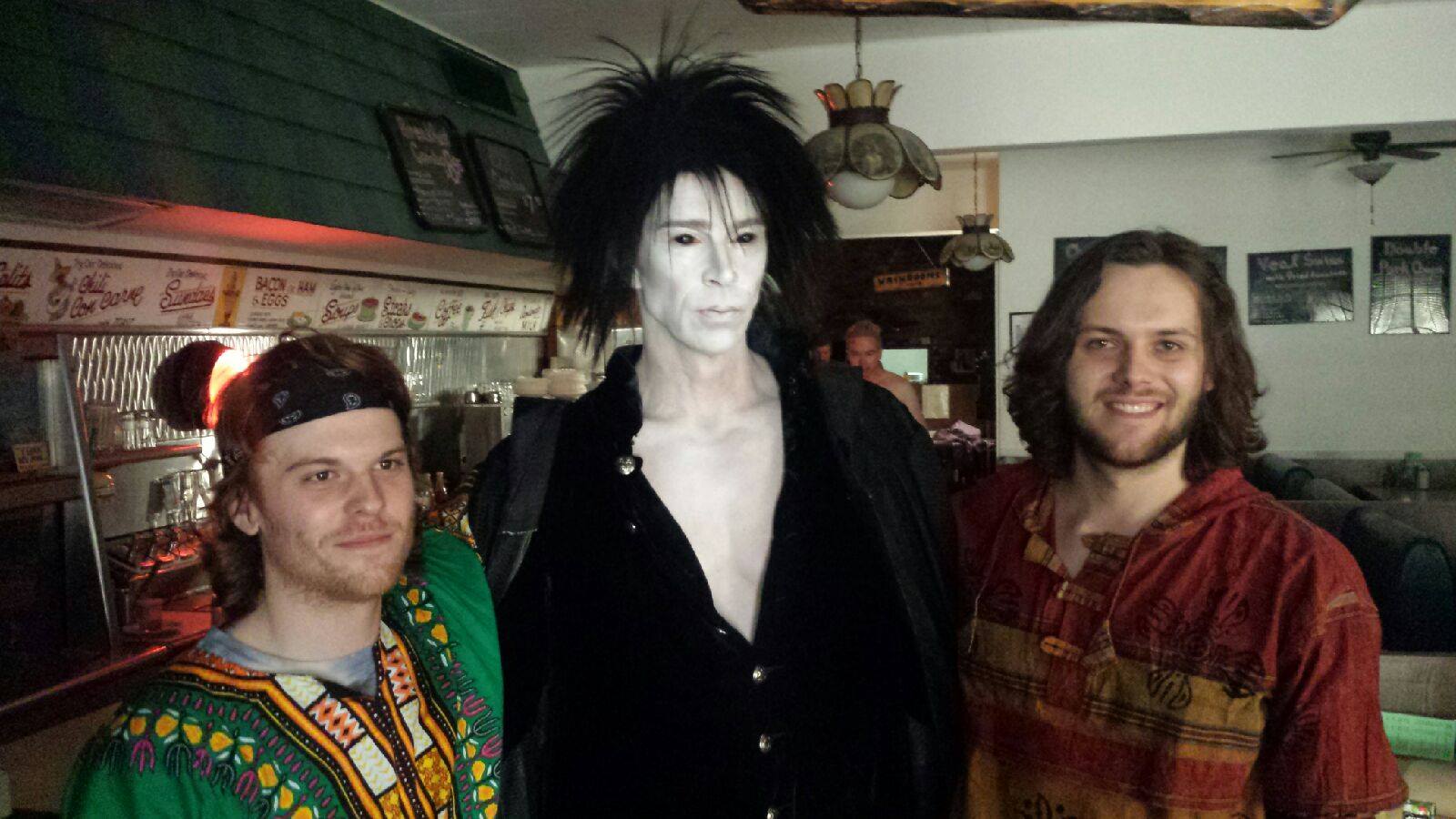 The creators themselves along with Morpheus, who looks more distant and godlike than Tom Sturridge ever could

Entirely self funded by Evan and Nick, 24 Hour Diner is a true labor of love. Its independent nature necessitated a longer post production schedule, but so too did the project’s ambition. Every challenge took more patience and money from a dwindling supply, but the singular crescendo of madness and beauty that resulted speaks for itself, proving their efforts were worth the struggle. 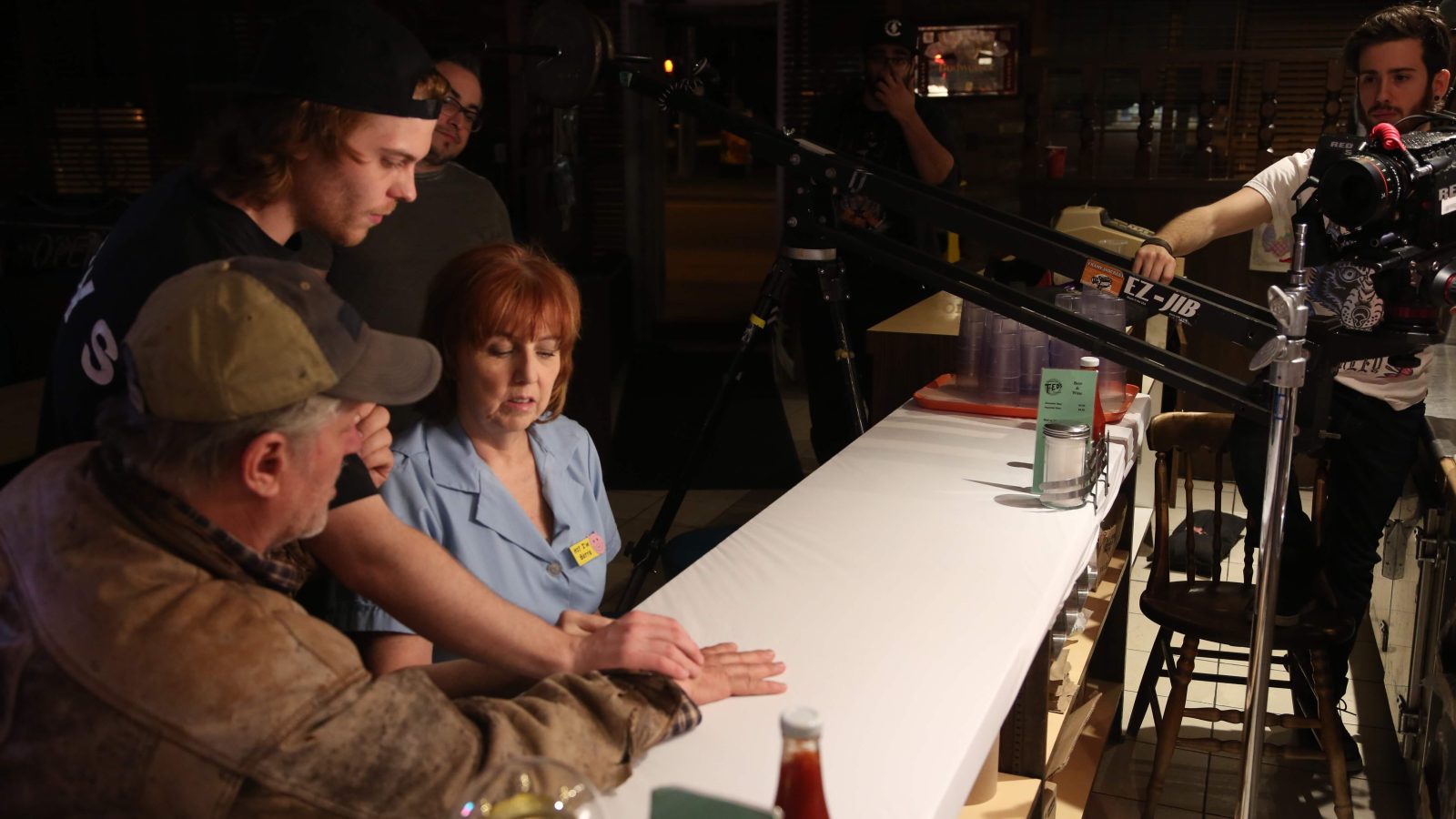 Production consisted of four nights of shooting at Ted’s Diner in Scarborough, Toronto. Each night they had to tear down their sets after shooting and put them back up the next night, sometimes earning the quizzical ire of early morning customers wondering just what all the fake blood and hands were about, but just as curiously not asking too many questions. (Scarborough is probably a more hardcore town than we in the states make it out to be.) With luck, the team didn’t need to make many changes to the diner to have it fit the nebulously retro aesthetic. Many small details, such as the stacked cups on the countertop, were a serendipitous part of the usual routine.

The cast and crew deserve special praise for their dedication under such unusual conditions, bringing to life all of the humanity and perversity of the original story. Zach MacKendrick (who may or may not want me to print this fact) removed all of his body hair to fit the prosthetics of Doctor Dee, and delivered a portrayal dripping with menace and animalistic violence. Frances Steyck Townend’s trial during hour 17 (no spoilers here) was as terrifying as it was enrapturing, and I’m more than excited to see her starring role in vampire thriller Bleed, soon to be released. Neil Affleck, star of 80’s cult slasher My Bloody Valentine, adds incredible weight and grounding to this outlandish tale.

The film’s animated culmination takes some liberties from the source material, but only to show more of the scale and concepts underlying Sandman. Working with Anthony Francisco Schepperd, an accomplished animator whose work you also need to absorb into your bloodstream immediately, the team showcased how well Sandman could be adapted to multiple mediums, portraying him tearing his way through hordes of nightmares to make his way towards the diner. (This, incidentally, explains why he took so long to arrive, a fact unmentioned in the comics.) The sequence, beyond being visually astounding and truly making me wish Netflix had chosen to animate their adaptation. 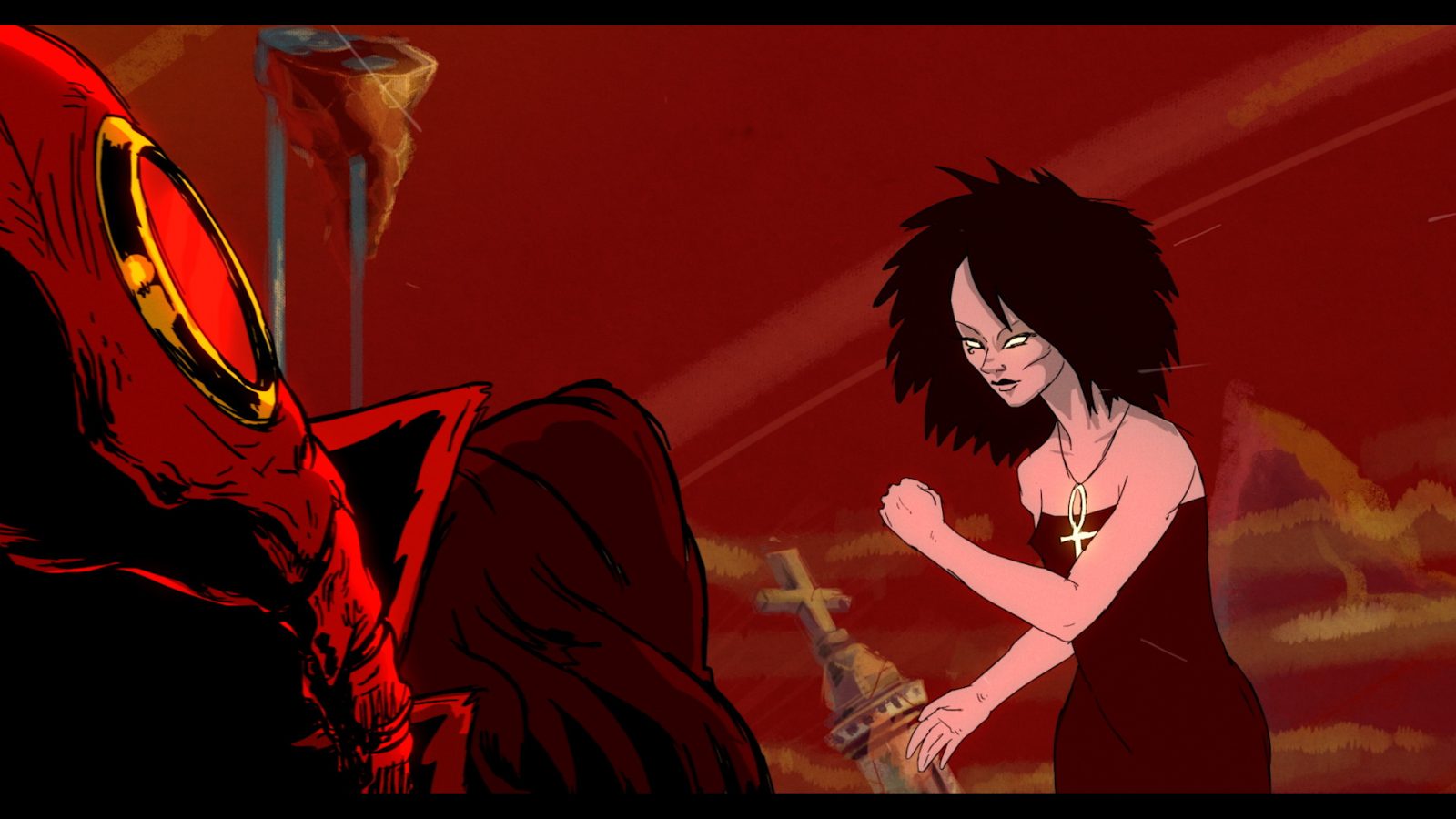 Since then, Evan and Nick have collaborated again on Compliance, a music video for Preoccupations. The grunge/folk horror monster suit designed by Nick and piloted by Evan is another work of such unique creative vision I find myself praying someone funds these two doing anything they can think of in a visual medium. While Neil Gaiman stated the fan film was “well done” the real triumph of this film is the continued praise it has seen since release. Years later, newcomers are finding it and praising its artistry, and I hope I can encourage some of you to do the same. 24 Hour Diner is beautiful, horrifying, and at the same time respectful of its source material yet utterly transformative. If you are a fan of Sandman, you owe it to yourself to give this a watch and think about the trials it took to make.