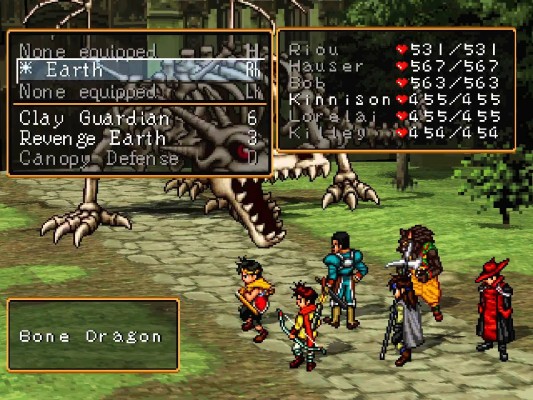 Suikoden II is considered to be one of the best role playing games of all time. Released in North America in September of 1999 on the original PlayStation, the game follows a young hero (don’t they all?) who, with his friends, must find 27 True Runes, rise to become the leader of the New Alliance Army, stop an invasion, and destroy Luca Blight – the aptly-named baddie for this outing. How many friends, you might ask? Try 108 of them (plus one extra if you played the original).

But it’s so much more than that.

Suikoden II throws you far into the deep end of a linear story with political turmoil, betrayal, and war right out of the gate. All 108 characters are fleshed out and unique, creating a game that exceeds the scope of nearly any that has been released before or since. With a turn-based combat system complete with combo attacks, chain combos, magic, and an auto-attack system, the game was light years ahead of its time. There is a reason why fans continue to charge over $500 for the disc on eBay and Amazon.

By the time you read this, Suikoden and Suikoden II will be available for PlayStation Network and Vita. Being able to take such an iconic RPG series on the go is exciting, so I immediately loaded it on Sony’s handheld.

The transition to the Vita comes after a massive letdown in 2006. Genso Suikoden and it’s sequel (as they are known in Japan) came to the PSP, but only in that region. This move to PSN and Vita comes courtesy of that PSP port, as evidence of the PSP warning screens upon load. The Vita version brings a few added gems that help the experience such as bilinear filtering, faster loading speeds, several screen modes (including original), and the crystal clear display on the handheld itself.

So much depth in this incredible RPG.

At this point, if I’ve not made it abundantly clear, Suikoden and Suikoden II are some of the best JRPGs ever made. There isn’t a great deal of grinding, the bosses were tough, the story was rife with political intrigue, you got to build your own army and run your own castle, and the combat was absolutely brilliant. Since you can buy it and play it both on your PS3 and Vita for $9.99 each, it’s an easy choice. Especially when your other option is…well, this.

Suikoden and Suikoden II are now available via PSN.  If you are an RPG fan, they are simply must-have.

Credit for the awesome image goes to Itsuya on Deviant Art.

Ron Burke is the Editor in Chief for Gaming Trend. Currently living in Fort Worth, Texas, Ron is an old-school gamer who enjoys CRPGs, action/adventure, platformers, music games, and has recently gotten into tabletop gaming. Ron is also a fourth degree black belt, with a Master's rank in Matsumura Seito Shōrin-ryū, Moo Duk Kwan Tang Soo Do, Universal Tang Soo Do Alliance, and International Tang Soo Do Federation. He also holds ranks in several other styles in his search to be a well-rounded fighter. Ron has been married to Gaming Trend Editor, Laura Burke, for 21 years. They have three dogs - Pazuzu (Irish Terrier), Atë, and Calliope (both Australian Kelpie/Pit Bull mixes).
Related Articles: Suikoden, Suikoden II
Share
Tweet
Share
Submit