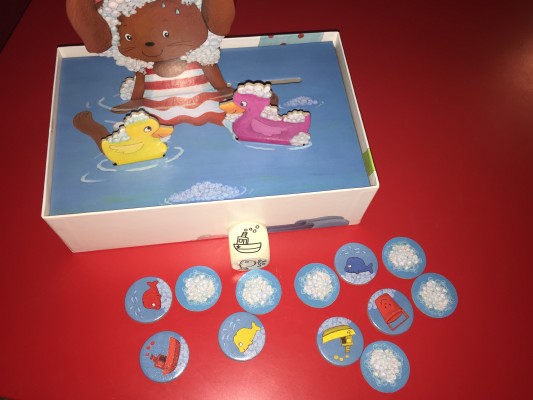 When I was contacted by HABA before Origins, I was excited to talk to them since they are known for great kids’ games in Germany. While some of their games have become popular here, many of them are still hard to find. That said, they are pushing to increase their presence in the US. With my son just turning three, they sent me a few games to try out and see how my son did with them — a perfect chance to see how their games resonate with an American audience.

With Bubble Bath Bunny, the box turns into a bathtub with a bunny and two rubber duckies taking a bath. The bunny and rubber duckies are made with heavy cardboard, standing straight in their slots. Setting the scene, even the outside of the bottom box shows a towel and some bath toys. The included tokens with pictures of pails, boats, and rubber duckies show bubbles on the other side, keeping with the theme. The large wooden die can easily be picked up by smaller hands. An included cardboard insert is meant to keep the “water surface” high. The notch in the water surface makes it easy to lift and put the components back into the box quick — an important thing when kids are involved.

The instruction book contains a few game rules. The large wooden die is rolled showing either a color or a picture. A token is then chosen and compared to the die. If the token matches the die, the player keeps the token. If not, the token is flipped over. The player with the most tokens wins. It couldn’t be simpler.

The second included game is similar. One player looks at a tile and the other one guesses if it is a bucket, whale, or boat. If the player is right, the player gets the token, while incorrect guesses are placed in the slot in the bathtub. Another variation of this game is to guess the color of the token. The player with the most tokens wins. Again, very easy.

The final game included here has a player look at the box and mention an item brought to the tub. For example, “Bubble Bath Bunny takes a towel with him in the bathtub.” Each player adds an item to the sentence (whether you include items that normally belong in the bath is up to you) until one player can’t repeat all the items in the same order. It’s like a kid’s version of the game Telephone.

My son had a lot of fun, spending most of our time playing the first game. He isn’t quite ready for the other two games. However, after rolling the die he would look for a matching token and flip other tokens until he found one that matches. When he found one that matched, he’d slide the token into the slot in the bathtub. As he gets older, I can see this being a good memory game for him. He enjoys taking baths, so he enjoyed the graphics on the pieces.

The box says that it encourages a child’s first understanding of game rules, recognizing and naming colors and shapes, and memory. The concept of turns is evident in the games provided, and I have seen some progress in taking turns and matching the color or shape on the die, but the memory part is something he’ll develop over time.

Hungry as a Bear

Hungry as a Bear uses the box as a base, similar to Bubble Bath Bunny, but almost all of the contents need to come out to put the bear in the box. It comes with the bear fold-up, spoon, plate, a die and twelve pieces of “food.” The die is made of wood and chunky, bigger than the large dice in King of Tokyo. The twelve pieces of food are made of two servings of six different foods.

It comes with a plastic visor that is supposed to be a higher quality component than the cardboard one, and it is admittedly easier to use. However, the plastic is so thin that my son would rather try to put the “food” on the visor and push it inside instead of putting it in the bear’s mouth. While that is admittedly more difficult than putting the food in the bear’s mouth, it’s not the object of the game.
While this is made as a game, Hungry as a Bear has a great toy factor. Putting food from the plate onto the spoon and sliding it into the bear’s mouth is a great way to get a feel for the components and increases hand-eye coordination, as well as cooperative play. It gives this game added value, and could possibly be able to be introduced to kids younger than two.

As with Bubble Bath Bunny, three simple games are included. One involves rolling the die, looking at the food rolled, and feeding that food to the bear. This one is the simplest game and takes five to ten minutes. Another is a memory game, where each kid tries to find a pair of the same food. When a pair is found, one serving is fed to the bear and the kid keeps one as a reward. This can be played solo as well as with other kids. The final game has one kid think of one of the foods on the plate and the other kids asking yes or no questions about them. The kid asks questions as long as they get a yes answer. Once they get a no, the next kid gets a turn guessing. I would say that you need at least three-year-olds for this game.

The box claims that the game develops fine motor skills, memory, and developing language skills. The games only take a few minutes, and my son’s attention span was long enough for one or two games or several minutes of free play. He liked the bear and the food, although he was more enamored with sliding the food inside the visor slot. Again, practicing taking turns was a bit lost on him as he’d rather feed the bear — or the hat.

Both Bubble Bath Bunny and Hungry as a Bear include ways to praise your kid, as they are intended for age two and over. These suggestions are helpful as ways to not only play the game, but also interact with your kid and get them more involved in the colors and pieces of the game.

I had heard of Animal Upon Animal before receiving it, so I was excited to actually get some real experience with it. The game comes with 29 thick wooden animals and a die with symbols on it. The painted animals come in all different shapes like snakes, sheep, pelicans, penguins, and a crocodile.

At the beginning of the game, the crocodile is placed in the center and each player gets seven random animals. The die is rolled indicating if the player adds one or two animals to the pyramid, if an animal is placed in front of or behind the crocodile base, if the player gives an animal to another player to balance on the pyramid, or if the other players get to choose which animal the current player has to add to the pyramid. If animals fall down, the player takes at most two of the fallen creatures and the next player takes their turn. The player who gets rid of their animals first wins. If it sounds complicated, it thankfully isn’t. For those with more experience, you can make the player take up to five fallen pieces or give pieces to all players evenly if there are less than four players.

As you can probably guess, the game is made to improve hand-eye coordination, which I observed that it certainly did. It also helps with decision making as you need to figure out which piece to place on the pyramid. The pieces all have different bumps and ridges on them, making some pieces fit in some places easier than others. Quite frankly, even adults will have a challenge playing along.

Animal Upon Animal also is great just for playing as a toy. The animals can be put in a zoo or barn, and they are recognizable enough that you can quiz your kid on the animal shapes. They are fun to hold and feel with their bumps and curves. I recommend just playing with these as toys for younger kids, as the box recommends these games for ages four and up. I can agree because of the decisions making is a bit advanced for my son, and he’d rather knock down the pyramid than try to place animals on top of it. I can understand his enthusiasm for doing this, as it’s more fun to knock something down than patiently build it up.

I have had these games for a couple of months, and I have seen improvements with my son’s ability to match and taking turns. These games are short enough that he enjoys finishing a game and then wants to move on to something else. Probably the best thing I can say is that these games are something that my son has asked to do specifically with me. Since he is three years old, that level of object permanence speaks to his impressions, and theyv’e made for a great bonding experience. If you have young kids, from toddlers to pre-teens, I can’t recommend enough looking for HABA games. I’ve had a great time with these, and I can’t wait to get a look at even more of them.

While not working as a Database Administrator, Keith Schleicher has been associated with Gaming Trend since 2003. While his love of video games started with the Telestar Alpha (a pong console with four different games), he trule started playing video games when he received the ill-fated TI-99/4A. While the Speech Synthesizer seemed to be the height of gaming, eventually a 286 AT computer running at 8/12 Hz and a CGA monitor would be his outlet for a while. Eventually he’d graduate to 386, 486, Pentium, and Athlon systems, building some of those systems while doing some hardware reviews and attending Comdex. With the release of the Dreamcast that started his conversion to the console world. Since then he has acquired an NES, SNES, PS2, PS3, PSP, GBA-SP, DS, Xbox, Xbox 360, Xbox One S, Gamecube, Wii, Switch, and Oculus Quest 2. While not playing video games he enjoys bowling, reading, playing board games, listening to music, and watching movies and TV. He originally hails from Wisconsin but is now living in Michigan with his wife and sons.
Related Articles: Animal Upon Animal, Bubble Bath Bunny, Hungry as a Bear, Tabletop
Share
Tweet
Share
Submit