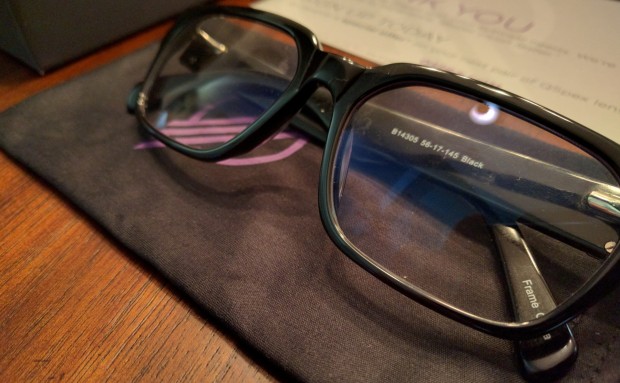 I am a migraine sufferer. If you don’t know what that is like, imagine having an ice pick stabbed directly into your eye, and then having it gently tapped with a hammer every few seconds. Suffice it to say that it’s the worst pain you will likely ever experience, coupled with nausea, sensitivity to light and sound, shaking, wild temperature swings, and pressure behind your eyes. Why am I telling you this as a prologue to an article about technology in glasses?

Because they helped with my migraine.

When you suffer three to four migraines a week, you become very interested in eyewear, even if you don’t need a prescription pair. You might remember that I had some success with a pair of glasses from Gunnar, but I did mention that the yellow tint is non-optimal. I recently began talking with QSpex about their new blu-bloQ lenses which it claimed blocked something called HEV light.I wondered if this might be my new go-to eyeglass set for writing and gaming.

What is HEV Light?
HEV light, or high-energy visible light, is a naturally-occurring portion of the blue light spectrum that is a normal and necessary part of eye health. That said, we as a technological society (and especially us as gamers) have a computer of some sort of screen always within arms reach. Whether that’s a cellular phone, a laptop, our work desktop, or a television for gaming or watching our favorite movie, we spend a great deal of time looking at a screen. Throw in the light coming off of LED lights or overhead fluorescent lighting you might have in your office and you have manufactured sources of HEV light bombarding your eyes all the time.

Several recent scientific studies have shown that blue light in the 415 nm to 455 nm spectrum, when exposed to the pigment epithelial cells of the retina over long periods of time, can permanently damage the recipient’s sight. Even short exposure can cause eyestrain, headaches, and mental and physical fatigue — something I’ve experienced frequently myself.

Putting QSpex to the test
One of the first things I was surprised to find out about QSpex is that their blu-bloQ technology is not a coating. Unlike glasses I wore before I got Lasik, or any eyewear competitor I could find, the blu-bloQ technology is the lens material through and through. This has a significant advantage over a coating as it blocks significantly more of the HEV light that can be harmful to the eye, especially at the bottom of the light transmission range. I don’t have a way to independently verify these numbers, but QSpex claims that at 415 nm their blu-bloQ glasses only let 1.67% of HEV light pass through to the eye versus 76.25% for the “national brand.” At the midrange there is a 60.10% to 82.65% difference, respectively. At the highest end, 455 nm, the delta is less at 87.51% versus 91.69%, but at that wavelength I imagine you are more concerned with why your eyeballs are smoking more than what glasses you are wearing. Without a scientific method to confirm the supplied test results, I had to turn to an even less scientific (but turns out, quite effective) method of testing — everyday use.

The hipster frames aren’t for me, but the lenses sure are!

Tis the season for lots and lots of writing
Given that it’s the holiday season, you can imagine how much time I spend in front of a screen. If I’m not looking at a screen to play a game, I’m looking at a different screen to write about it. It means I’m exposed to a great deal of HEV light, and unfortunately that can exacerbate my migraine issues. This holiday season I’ve suffered quite a bit more than usual as I added to my already-packed schedule the stress of changing states, starting a new job, adopting a 16 year old kid, hunting for, and buying, a new house, selling my old house, moving, and nearly $18,000 worth of damage from the movers in that process. When my QSpex lenses arrived I was suffering one of these migraines, so I figured now would be a good time to see if they could help. As I mentioned in the beginning of this review, they did.

Doing some deep breathing and sitting as still as possible, I put on the QSpex, watched some television, and tried to relax. I had already maxed out my prescription pain medication hours ago,and pushed a little beyond the recommended amount of acetaminophen, and I hadn’t even put a dent in the pressure behind my eyes or the pulsing pain in my skull. Days like this seem to go on forever, and it’s usually punctuated by getting sick, and occasionally passing out from the pain.

Surprisingly, after about half an hour of relaxing and trying to distract myself with reruns of Cops, my head started to feel a little better. I knew the only way to really test this unscientific theory was to see if removing the last thing that changed and see if it made a difference, so that’s what I did. I took off the glasses and watched a little more television.

My migraine was more than happy to revisit havoc upon my skull.

Putting the glasses back on, I was able to get things heading back in the right direction until it was eventually manageable.

Over the last two weeks I’ve spent a great deal of time wearing the hipster-framed glasses QSpex sent me to demo. (QSpex makes lenses and technology — not frames) I was surprised to see (ha! pun!) that the eye strain I’d been suffering with when not using my Gunnars was drastically reduced. While watching movies, television, gaming on my laptop or consoles, or just wandering around the house, I kept the glasses on.

Looking at just my time with Fallout 4, I’ve spent over 100 hours looking at a screen. It’s a fact that you blink 66% less when looking at a computer (something called Computer Vision Syndrome), and when you think about that long-exposure of HEV light to your eyes, it makes a compelling case for using some sort of protection for the one sense we rely on most.

I’ve never been so happy to wear glasses.

Summary:
While I can’t state scientifically that it in fact reduced my migraines, or their severity, I can tell you exactly that anecdotally. If you are a gamer who wears glasses normally, or one who wants to keep their peepers safe, you might want to pop into your local lens shop and ask them for QSpex blu-bloQ lenses — they delivered on every promise they made, and even a few they didn’t.

Ron Burke is the Editor in Chief for Gaming Trend. Currently living in Fort Worth, Texas, Ron is an old-school gamer who enjoys CRPGs, action/adventure, platformers, music games, and has recently gotten into tabletop gaming. Ron is also a fourth degree black belt, with a Master's rank in Matsumura Seito Shōrin-ryū, Moo Duk Kwan Tang Soo Do, Universal Tang Soo Do Alliance, and International Tang Soo Do Federation. He also holds ranks in several other styles in his search to be a well-rounded fighter. Ron has been married to Gaming Trend Editor, Laura Burke, for 21 years. They have three dogs - Pazuzu (Irish Terrier), Atë, and Calliope (both Australian Kelpie/Pit Bull mixes).
Related Articles: Culture, QSpex blu-bloQ
Share
Tweet
Share
Submit