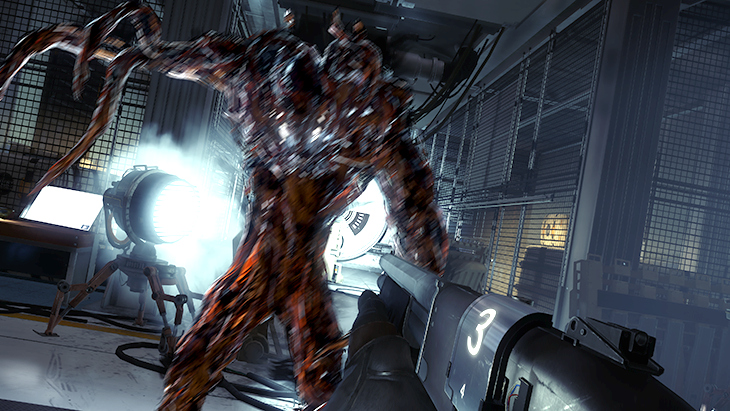 Noticing a lone Phantom Typhon lumbering across the narrow room I’m currently scavenging for materials, I quickly hunker down behind some cover and check my inventory. I only have four spare shotgun shells, but it should suffice to down the shadowy monster. And if I were to slow it down with my GLOO Cannon, I might even save some of my precious rounds.

Prepping my weaponry, couched along the railing for cover, I slowly advance on the smoldering alien. Its patrol seems to be charted in my direction, so I equip my bolt-caster to improvise a distraction. The foam darts are useless in all-out combat, but by firing one off a few meters to the creature’s right, I’m able to successfully send it on a detour away from me. With its back turned to me, I resume my stealthy approach toward the Phantom with my GLOO Cannon equipped, ready for incapacitation. It’s looking like an easy kill as I pass by some desk chairs — but they aren’t desk chairs at all! With an ethereal twitch, the chairs transform into two spider-like Mimics and spring towards me!

Terrified, I whip around like a maniac, trying to regain some semblance of composure as I blast the room with foaming glue, hoping to catch the sneaky fucks before they run off to imitate some other unassuming office appliances. I thankfully catch them in a stream of glue and crush them with my wrench like the oversized pests they are, then turn back to the Phantom, who has become very aware of my presence, thanks to the aforementioned chaos (my very real shrieks, thankfully, went unnoticed by the in-game monster). With what remains of my glue canister, I send a jet of the stuff in the Phantom’s direction, but it teleports out of the way. I persist with another barrage of paste, this time hitting my target. With only moments to spare before the Phantom regains mobility, I swap out my gilded Margrave shotgun and unload. In three shots, the beast falls. I rush over to collect my spoils, the materials left behind by the alien—spare parts, Typhon organs, and other assorted junk I may use to fabricate ammunition and med packs. I still have one shotgun shell remaining, and I’m thankful for it.

This unscripted scenario contains so much of what makes Prey so thrilling, but it’s the moment the Mimics transform and launch their attack on me that has me both terrified and entranced by this game. In that moment, Prey went from just another stealth/survival game to a genuinely frightening experience. I’ve spent my initial ten hours with Arkane Studios’ Bioshock-esque shooter in perpetual fear, casting a suspicious eye on every inanimate object I come across. It’s exhausting, and I’m hooked.

Prey starts off with all the tell-tale signs of a Half-Life-esque science fiction thriller. Playing as Dr. Morgan Yu, the player is taken on a visually stunning tour of spectacles, like helicopter rides and drone-like robot assistants, alluding to the lucrativeness of the space-tech corporation TranStar. As Morgan finds himself deeper inside the facility, the corporate sheen gradually makes way for an ominous tone suggesting that some secret, unregulated, illegal, dangerous, very sci-fi space research is underway; a tone which thickens and clouds every space like a dense fog before a violent storm. Without spoiling anything, the storm eventually hits, and the game begins.

By the time the action starts, you are aboard Talos I, a space station orbiting the Moon that has been infiltrated by an alien organism known as typhon. These smoky aliens take several forms, including the furniture-impersonating Mimics and the tall, agile Phantoms mentioned before. You’re there to kick typhon-alien ass and chew bubblegum—and you have plenty of bubblegum, but you need to recycle it into Organic material so that you can craft an extra Medkit, so the chewing will have to wait.

Prey is very much one of those games; with every room I enter, after clearing it of any alien threats I find, I scour every desk, locker, the occasional cooler or safe—every visible surface for fried circuit boards, computer fans, biohazardous waste bags, banana peels, and all sorts of junk that may be brought to a recycler for churning into various materials which, in turn, may be used to craft ammunition, health kits, etc. This loop requires a lot of scavenging and inventory management, but the tools provided for these chores are meticulously crafted to make the endeavor a painless—even enjoyable—experience. Arkane has clearly learned from past games with similar, yet less fluent, inventory systems (Arkane’s own Dishonored being one of them).

I found myself immediately hooked by the lure of such foraging bliss. For every section of the station I’ve encountered thus far, I’ve made sure to conduct a comprehensive scan of every room readily accessible before moving forward to the next objective. Entire quest lines have opened up simply by way of perusing the emails left on some indistinct computer or by listening to an audio log tucked away in some closet. I feel constantly rewarded by my incessant hunger for more materials.

The only things standing in the way of my avaricious romp are the typhon. If not for the humanoid Phantoms, I could roam the halls with impunity. If it weren’t for the Mimics, I could search every desk drawer and lift every innocuous object with no hesitation. But on Talos I, every room can carry a threat. If I’m not careful while rummaging for more Organic materials, any coffee cup-impersonating Mimic could get the jump on me and waste some of my precious health points (or worse, give me a fucking heart attack).

The Phantoms, as it turns out, are far more irritating than their pest-like brethren. For the first few hours, every Phantom encounter came with the promise of a loss of precious ammo, health, and/or other resources. Those twelve shotgun shells I just crafted from the scarce Mineral material I had fabricated from nearly two hours’ worth of looted junk—at least half of those rounds are toast once I meet one of these fuckers, especially in Prey’s initial hours. With very little in the way of upgraded traversal and/or combat abilities (those come later in spectacular fashion), Prey’s combat scenarios put you up against a wall. Scarce ammo, low damage output, and the pervasive terror brought on by the Mimics’ heartless tricks all lead to me feeling pretty helpless for the majority of Prey’s opening.

Prey gets so much right — but not the combat

Thankfully, it isn’t very long (though I’d say just breaching too long) before you’re granted with the ability to learn the aliens’ superpowers. Then, Prey quickly becomes a fantastic game. The typhon perks presented to you aren’t quite as intuitive as the supernatural abilities featured in other Prey-like games (Half-Life 2’s Gravity Gun, Bioshock’s Plasmids, Dishonored’s Blink, etc.), but once I started taking time planning my attacks with each encounter, I’ve found some wonderfully creative ways to set up a room for a resourceful win. One brilliant plan of mine involved collecting several automated turrets, arranging them along the perimeter of an alien-infested room, then using my newly acquired Mimic ability to possess each turret in turn to fire upon the typhonic scum, ending the feud with a few shots at a nearby canister of nuclear waste. I must admit: most of my attacks in Prey have tended to go off differently than planned. But that one went magnificently well.

I’ve mostly enjoyed my first few hours with Arkane’s “shock” shooter, despite its tough and detrimentally taxing opening. I’ve yet to find a level of comfort and familiarity with the combat style I’m currently exploring, and I like that. The lack of immediate clarity as to how I’m best fit to approach my character build tells me that there’s a multitude of valid and interesting options.

Joe's favorite games are Zelda: Majora's Mask, Dishonored, Super Mario Bros. 3 and Hearthstone. His favorite game is not The Witcher 3 because he hasn't played it yet.
Related Articles: Prey
Share
Tweet
Share
Submit