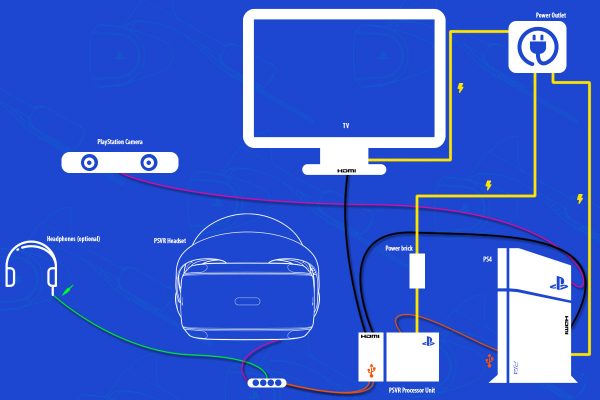 You’ll see a lot of reviews about PlayStation VR over the next few weeks, but very few from somebody who went in knowing that VR makes them sick. Since my injury in the military, I’ve had difficulty with any VR setup, but I could never put my finger on what it was exactly that gave me migraines and nausea when I plunged into the virtual world. As a result, I skipped out the Rift, I dodged the Oculus, and sidestepped the Samsung (possibly saving myself some face burns, it seems). As a result, I sent my Editors to cover PSVR initially, because I thought “why would it be any different?”

The PlayStation VR isn’t fundamentally different from the aforementioned systems — it features a headset, dual screens for the eyes, head-mounting apparatus, and a nice long cord to tether you to the computing device. The similarities, however, stop there.

Setting up the system is incredibly simple, despite the number of cables included. If you can count to five (the cables are numbered), and you follow the simple pictures put forth in the manual, connecting the processing unit in-line with your PlayStation 4 is a breeze.

PSVR, Move Controllers, and the camera.

I guarantee you that the first thing you’ll notice about PSVR over its contemporaries is that it is more comfortable by a wide margin. It’s clear that the engineering team at Sony spent a great deal of time improving upon the velcro strip of the Oculus Rift, or the rubber straps of the HTC Vive. The result is clear — Sony has built the most comfortable VR rig on the market.

Much of the comfort for the PSVR comes from the design of the headband. Other than being highly-adjustable for nearly any size head, the utility of the headset ensures that the weight of the unit sits evenly distributed across the band. As a result, the PSVR doesn’t feel like you’re wearing a cinder block on your face compared to other VR units. Because the weight is now supported by the frame of the system, the visor (or “scope” as Sony refers to it) does not rest on your face. This single distinction makes playing PSVR for hours possible.

Better than the weight distribution engineering is the simplicity of adjustment for the system. The headband adjusts with a simple dial in the back, adjusting to fit snugly. A button in the center of the band fully releases the tension with a single press. Under the visor on the right side is a small button that slides the visor towards or away from your eyes. This seemingly simple feature makes all the difference in the world as it allows each user to adjust the system to their eyes without fumbling with uncomfortable straps.

It looks complicated, but it really isn’t.

With the system comfortably resting on my head, and a brief calibration in the rear view, I was greeted by a massive version of my own television displaying my PlayStation 4 homepage. Launching the PlayStation VR demo pack-in, I dipped my toe into the water. It was time to find out if I made a sickness-inducing $500 mistake.

I started up something tame to start things off — Job Simulator. The assumption was that a lot of movement would cause me nausea, so I figured this might be a good test. The game starts with asking me to stand Vitruvian Man-style, holding my two PlayStation Move controllers aloft. Fun fact: your arm span is almost exactly equal to your height, so this allows the game to figure out your playspace with a single movement. The gameplay for Job Simulator is more of a physics simulator than a game, giving you a crazy office cube where you can copy donuts with a Xerox machine, throw paper airplanes, play with a Newton’s Cradle desk toy, and many more loopy stuff. I have never had so much fun at work. It’s goofy, pointless, and a fantastic introduction to VR.

Jumping into the deep end, I fired up the demo for Until Dawn: Rush of Blood. The game is literally on rails, putting you in the cart of a twisted amusement ride as it rattles through a horrifying clown-fueled nightmare. Like a twisted haunted house, you’ll soon be accosted by swinging axes, squealing dismembered pigs, giggling and crying children, as well as other horror staples. Filled with jump scares, I gave it to my wife to try as her first introduction to VR. Schadenfreude ensues as I stood nearby to catch the headset should she decide to fling it across the room. (Our review)

She needs a good moisturizer.

CCP Games brought high speed space simulator EVE Valkyrie to the Rift last year, requiring a monster PC to power it. I was surprised to see how amazing it looked on the Playstation VR despite having a lot less power to work with. I was even more surprised that, despite the blistering speed, rolls, and all-out assault on my eyes, I was able to play for hours without feeling any ill effects. (Our review)

The last game of my first night with the PlayStation VR was the Resident Evil 7 biohazard kitchen demo. The demo starts with the player bound at wrist and ankle in a filthy kitchen. At my feet lies a video camera on a tripod, with an unconscious man curled up on the floor just beyond. Using my Dualshock I knocked the camera over, awakening the man, but his role in this horror film was short. A twisted female creature stepped in behind him, stabbing him through the chest and spraying blood all over me. Stepping forward, she began to menace me with her bloody knife until the man sprang back to life, attempting to tackle her to the floor. Plunging the knife into his shoulder over and over, she hauled him around the corner, his severed head being unceremoniously thrown back at my feet shortly thereafter. The room fell silent and I knew the inevitable jump-scare was coming, but the bloody hands over my face and the girl popping in from over the top of my head was enough to make me spew a list of expletives that would make a salty sailor blush. The demo comes to an end after just five minutes, and it was largely non-interactive, but that didn’t stop it being absolutely terrifying. Resident Evil 7 biohazard in VR is the future of the horror genre, and the likely source of more than one wet seat.

If there’s one game that absolutely nails the use of the PlayStation Move controllers and the best aspects of VR, it has to be I Expect You To Die from Schelll Games. The controls are tight, the gameplay is witty and engaging, and the stylized graphics look great. It takes the promise of games like Job Simulator and wraps it in a fantastic 70’s style Bond-esque wrapper. Check out our review to see why I’m calling it the best launch window title for PSVR. (Our review)

The puzzles are deviously fun.

We have covered quite a few more PSVR launch window games, each with their own strengths and weaknesses. Hit up the PSVR section of Gaming Trend to see all of those reviews for yourself.

If there is one thing that is somewhat inconsistent with PlayStation VR, it’s the graphical quality. Driveclub VR is something between a PlayStation 3 and PlayStation 4 game, EVE Valkyrie has the occasional rough edge, and text in general is not as crisp and clear as you might like. Here’s the thing, though…none of it matters. Within moments of firing up Sony’s virtual racer, you feel like you are behind the wheel of a powerful sports car. Being shot out of a gravity accelerator into low orbit as massive super-carriers warp into the area in EVE Valkyrie is indescribably awe-inspiring. Even using the giant superdeformed hands to screw around in the office in Job Simulator feels like total immersion. Almost immediately, the jagged edges are lost in the feeling like you’ve been transported to another world entirely.

One of the things that I love about the PlayStation VR, and a clear advantage over every other VR system, is the simultaneous display of what the PSVR user is seeing being displayed on the TV. Instead of chopping it into two goofy circles to show the left and right eye, it displays a single clean image. This means that those not playing can experience the game with you, instead of being shut out entirely. While virtual reality is almost entirely a single-player event, this method lets everyone watch the fun at the very least.

As I stated before, I am among the 12% of the population that suffer from migraines and motion sickness. Consequently, all of my VR reviews will come from the perspective of someone who simply cannot play all games. I’m certain that I’m not alone. It’s for that reason that I implore publishers and developers — your VR title must have a demo version. It doesn’t matter if it’s a 15 minute timed slice of gameplay, or if it focuses on a particular feature, this will give gamers like myself a chance to dodge games that’ll induce nausea or headaches.

I shouldn’t have to suffer for your game.

In all, the number of games that are nausea free continues to grow daily as developers work with the platform and better understand how consumers use it. I’m not sure if a ‘brain callus’ is a thing, but the more I use VR, the less it affects me. I’m not sure if it’ll ever be comfortable, but the intersection of nausea and fun is moving quickly in the right direction.

The launch of a new platform is always exciting. The first year brings hits and misses, covering a wide variety of game types to see what’ll work well on the new hardware. PlayStation VR is no different, offering a wealth of standing, sitting, controller-based, and move-based experiences. Some are fairly pedestrian, asking the user to simply experience the world of VR without asking much of them, while others are fully-realized worlds that embrace the new format with varying degrees of success. There’s one thing to keep in mind as we embark on this new virtual journey:

The best is yet to come.

Ron Burke is the Editor in Chief for Gaming Trend. Currently living in Fort Worth, Texas, Ron is an old-school gamer who enjoys CRPGs, action/adventure, platformers, music games, and has recently gotten into tabletop gaming. Ron is also a fourth degree black belt, with a Master's rank in Matsumura Seito Shōrin-ryū, Moo Duk Kwan Tang Soo Do, Universal Tang Soo Do Alliance, and International Tang Soo Do Federation. He also holds ranks in several other styles in his search to be a well-rounded fighter. Ron has been married to Gaming Trend Editor, Laura Burke, for 21 years. They have three dogs - Pazuzu (Irish Terrier), Atë, and Calliope (both Australian Kelpie/Pit Bull mixes).
Related Articles: EVE Valkyrie, I Expect You To Die!, Job Simulator, Resident Evil 7, Until Dawn: Rush of Blood
Share
Tweet
Share
Submit