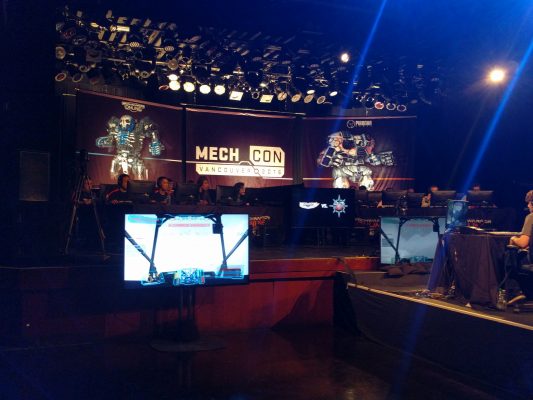 I’m surrounded by more than 500 people that can tell you the accurate range of an ER PPC, how many hardpoints it takes up, and in what chassis variants you might find it. MechCon is the culmination of all things MechWarrior and Battletech, bringing together fans and competitors from the free-to-play MechWarrior Online crowd with the incredibly deep and complex strategic gamers from the Catalyst Labs hex-based board game crew.

These are my kind of people.

The stage for battle is set.

This evening, the team from North America (Empyreal), Oceanic (228th The Wild Ones), and Europe (EON Synergy) came together to duke it out for a grand prize of $144,000. Just how popular is this free-to-play title? Launching in September of 2013, gamers have logged just over 863 years of gametime across 13,000,000 matches. This event is the first foray into the eSports market for Piranha Games, and based on the fierce competition I’ve seen, they are ready for the eSports big leagues.

Each round, the team representatives select which maps they’d like to ban from selection, alternating back and forth until one map remains; this is where the two teams do battle. Competitors are free to choose the makeup of their loadout, often dividing into individual job duties. Light mechs are scouts (though at this level can be fairly lethal in their own right), while medium and heavy mechs cover the midground skirmishes with a mixture of short and medium weaponry. The Assault mech class are vicious, sporting incredibly powerful weapons that can decimate an opponent with only a few hits, but they are hampered by their tonnage, often lagging behind their faster counterparts.

The maps and game types can have a great deal of impact on the types of mechs being fielded by the teams. Empyreal’s winning strategy today for capture maps has been to use a pair of nimble light mechs to skirt the edges, harassing enemies to prevent their captures (any combat stops the capture countdown), while using their superior agility to capture points of their own.

One of the things I like best about MechWarrior Online, which has been reinforced by this con, is the very warm community. Nearly everyone I encountered during the event is a huge fan of the universe and giant stompy mechs, but they are also some of the most forgiving and willing to provide instruction to new players. Starting out, other players were happy to give me tips on what mechs are good for what roles, and where a beginner might do the most good to contribute to the lance’s success. Similarly, everyone I’ve talked to at MechCon 2016 is simply excited about hanging out with their fellow MechWarriors and swapping stories about how they got into the game, whether that be tabletop or the online game. One such gamer was a special education teacher, providing instruction to kids with a myriad of learning disabilities. Playing tabletop MechWarrior helped them learn rules, concentration, and friendly competition.

Also announced at MechCon 2016 is an entirely new map that could be considered a new mode. Entitled Solaris 1, the map is a 1v1 engagement, letting players square off without a lance to back them. If you want to really test your skills, this is the place to do it. I got to check out this new map and came away impressed with this simple change. Squaring off against a fellow Commando, we used the terrain and a nearby ramped structure to fight rather than simply circling one another like heavyweight boxers. The large pillars in the map turned out to be a hotspot, but larger mechs found difficulty hiding behind the small hill that offers separation between spawn points. In the end, my opponent submitted, having expended all of his ammunition as I cleaved off his head using repeated blasts from my medium laser. It was a fantastic time and a mode that might serve as a drop-in/out play session.

Alongside a fantastic battle between Empyrion, EON Synergy, and 228th: The Wild Ones (you can watch it on Twitch here) Piranha Games had a few incredible announcements. The first few were direct improvements to MechWarrior Online’s user interface. First up is a fantastic star map and the promise of a Clan vs. Inner Sphere combat. Voting for an attack vector over the course of the invasion, this mode will also bring quickplay modes and dropship respawns. You can check out Faction Play 4.1 when it hits on December 13th.

Your loyalty will be tested.

Another addition coming in this upcoming patch is mode called Escort. The mode is similar to the VIP mode in games like CounterStrike, casting one team as aggressor as the other tries to protect their VIP mech until it reaches the dropship for escape.

A little further down the road map is a mode I’m excited to try for myself. Entitled Assault, this mode brings multiple objectives as teams push to capture an enemy base while simultaneously defending their own. Assaulting hardened wall structures, the lance must breach them, destroy generators, and take out enemy radar towers to seize the enemy stronghold for their own. We’ll have to wait a little bit for that one as it’s slated for Q1 2017.

The Roughneck is the first mech from Piranha

The last update revealed (though I doubt it’s the last thing on the roadmap) is a revamped UX/UI system. One of the things that turned me off when I played the game in the early beta it was how cumbersome it was to manage my mech bay and build my loadouts. The team has been hard at work on a new grid system that uses mech XP and GSP to unlock skill nodes in a new graphical way. This system limits the number of unlocks per owned mech, but grants a unique skill tree to each. This new system, entitled Skill Tree 1.0, also means that you won’t need three of each mech type to build mastery. To level the playing field, all XP, GXP, and C-Bills will be returned for redistribution. We’ll get our hands on this new system in February.

2017 is a big year for Piranha. Their commitment to go deeper with gameplay, explore new maps and modes, and to launch role-based warfare and objectives are just the tip of the iceberg. CEO Russ Bullock took to the stage for one more surprise – a live demonstration of MechWarrior 5: Mercenaries. Thankfully, you can see this first glimpse for yourself.

It has been a decade and a half since we’ve had a proper singleplayer MechWarrior game. Piranha Games, having cut their teeth on the online-only iteration of MechWarrior, are ready to try their hand at something solo. Gone are the microtransactions and lobbies, or to cite Bullock during his live stage demo — “You pay full price, you get the game, and you’re done”.

MechWarrior 5: Mercenaries tells the story of a mercenary outfit in the Inner Sphere trying to build a name and reputation for itself. Which house you fight for, and what contracts you take, are entirely up to you. If that simple concept gives you goosebumps, you aren’t alone.

The team has NAILED the feel and scale of MechWarrior.

Everything about MechWarrior 5: Mercenaries reminds me of the much-loved MechWarrior 2: Mercenaries. Piranha Games have proven time and time again that they have the skills to deliver amazing mech combat, and this small vertical slice of this new installment brought forth a deafening roar from the crowd. A 2018 launch seems a long time away, but we’ve been waiting 15 years to climb back into the cockpit — a little longer won’t hurt.

Ron Burke is the Editor in Chief for Gaming Trend. Currently living in Fort Worth, Texas, Ron is an old-school gamer who enjoys CRPGs, action/adventure, platformers, music games, and has recently gotten into tabletop gaming. Ron is also a fourth degree black belt, with a Master's rank in Matsumura Seito Shōrin-ryū, Moo Duk Kwan Tang Soo Do, Universal Tang Soo Do Alliance, and International Tang Soo Do Federation. He also holds ranks in several other styles in his search to be a well-rounded fighter. Ron has been married to Gaming Trend Editor, Laura Burke, for 21 years. They have three dogs - Pazuzu (Irish Terrier), Atë, and Calliope (both Australian Kelpie/Pit Bull mixes).
Related Articles: Battletech, MechWarrior Online, Tabletop
Share
Tweet
Share
Submit