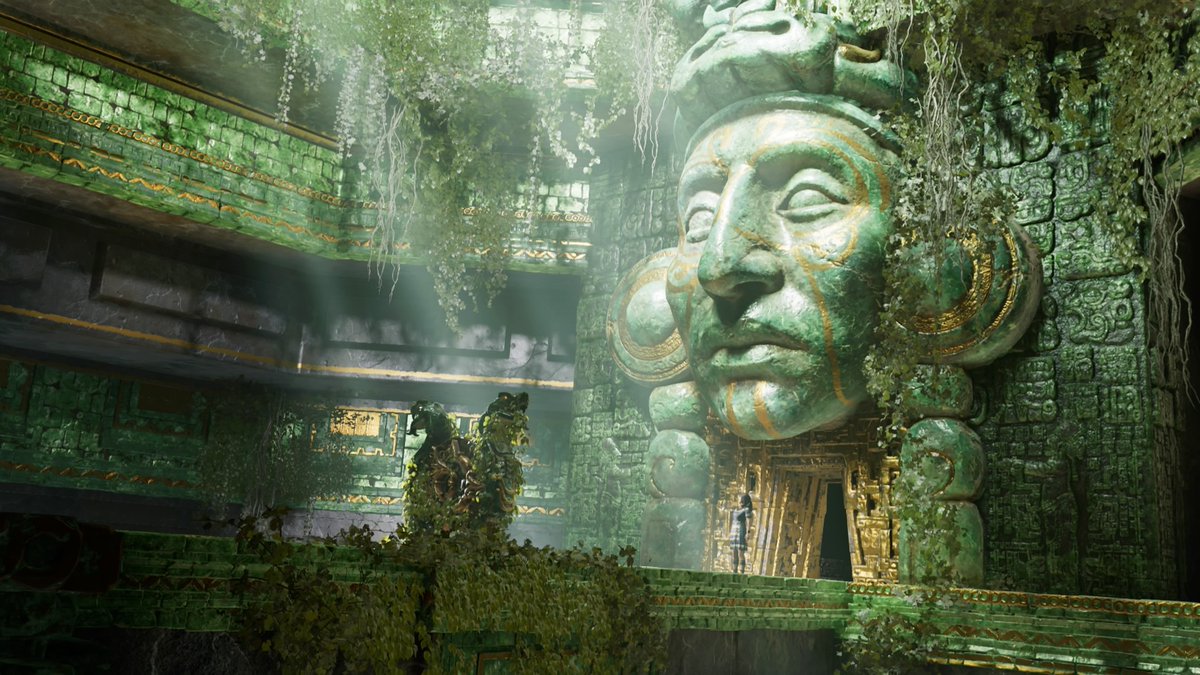 At risk of sounding corny, I’ve always seen Tomb Raider as a series living in the shadow of Uncharted. I never played the 2013 reboot, but I did log many hours into Rise of the Tomb Raider. While I did really like aspects of the game, I never found the motivation to finish it. I found just about every aspect of Rise good, but lacking just enough to slide in under great. Having played the game right on the back of Uncharted 4, my expectations for that type of game were set incredibly high, which no doubt influenced my feelings towards Rise. But, I did feel that with just one more entry Tomb Raider could be just as good as Naughty Dog’s series. Having now played Lara’s third rebooted outing, I can conclude that the game is thoroughly enjoyable front to back, but it does knock over a few hurdles on its way to the finish line.

Shadow of the Tomb Raider’s best aspect is undoubtedly its gameplay. What is so compelling about this title’s moment-to-moment experience was the way that it balanced its three pillars of gameplay: combat, traversal, and puzzle-solving. The latter two are far more integral and prominently featured, and where the lion’s share of your roughly twelve hours with the game’s campaign are spent. I really appreciated the shift away from combat-heavy gameplay, as it made each of the game’s firefights even sweeter. Yet, here in Shadow of the Tomb Raider, the game forces you into far fewer straight-up gunfights, instead turning combat into a sort of deadly bout of cat and mouse.

Lara’s cunning and wit are the key tools for victory. You’ll spend your time lurking in the underbrush, moving through the vines, and traversing the treetops, all the while using survival vision to pick off isolated targets. The tension that mounts as you nock an arrow waiting for that headshot indicator on an unsuspecting target is only paralleled by the arrow’s release as it domes the Trinity grunt with a resounding thud. The game is visceral, and violent. However, this isn’t a situation where you’ll be hidden behind a chest-high wall with an AK-47. This is tactile, thoughtful combat that will truly test your skills with unconventional tools. Sure, you can draw your pistol and light up the opposition, which you do need to do at times, but that is nowhere near as engaging as covering yourself in mud, hiding in a wall of vines, and then sliding your knife between a Trinity guard’s ribs. When Lara kills someone, you feel it. And, when you layer myriad arrows and environmental traps into the combat, the arsenal of tools at your disposal is nearly incomparable.

Yet, while the tactical depth associated with this vast arsenal is flexed in most combat instances, there were times in which Shadow awkwardly limited what weapons I had at my disposal, limiting me to only a knife, or a gun. Each individual combat mechanic is functionally solid, but the interplay and strategy that results from using all of them in conjunction is where the game really shines. So, being cornered into this one mode of combat was a bummer. The knife-only sections do fare better than the gun-toting ones, but again, not having my bow and sling of arrows just felt restrictive. Luckily, only a handful of combat instances forced my hand in this manner.

However, as I said before, that is a relatively small portion of the game in relation to the traversal and puzzle-solving. Traversing vast landscapes with a climbing axe and Lara’s intuition is surprisingly enjoyable, and never became monotonous. In the Uncharted series, I’d simply jump onto a wall and mash X until I was done scaling whatever surface I was on, as it was typically very linear in design. While Shadow’s traversal can be just as linear, it feels much more dynamic. You’ll be freehand climbing, then thrust into an axe section, into a rope swing, back to the axe, back to the rope, and back to freehand over and over, which made getting from point A to B interesting. The game has a great sense of scale as well, which really did augment the traversal. The game’s brutal death cutscenes, should you slip-up, were enough to send a shiver through me as well, which kept me even more engaged in the climbing. When a missed hand-hold results in Lara’s back breaking over a huge boulder, there is a certain motivation to move carefully. Shadow does rely on tropes like easily broken handholds and false platforms a bit too often though, which was became tiring to see. These feel overused, and I couldn’t help but roll my eyes every time I jumped onto a ledge just to see Lara struggle as one hand slips off– spoiler alert, she’s going to be alright. Thankfully, that is the only aspect of traversal that felt contrived. Yet, Shadow allows you to do more than just climb, as traversal incorporates copious underwater segments, which I really enjoyed. While not everyone will find these that fun, as they’re rather straightforward, I found these areas fantastic. The underwater environments are richly detailed and backed up by great swimming controls. As someone who loves the water, getting to explore the depths of sunken tombs, swampy lakes, and surging rivers was just as engaging as the climbing, and served to break up long combat-free segments.

The final aspect of Shadow’s gameplay, the puzzles, surprised me the most. Traditionally, I hate this aspect of adventure titles. Even in the Legend of Zelda, I often dread having to enter dungeons, because fiddling around with a puzzle trying to find the solution just isn’t compelling to me. Shadow has a fantastic dynamic difficulty system though, which not only alleviated my issue with puzzle-solving, but actually led me to enjoy the puzzles themselves. You can individually adjust the difficulties of the three gameplay pillars to your liking, so I instantly dropped the puzzles to easy. I personally feel that these types of challenges serve to only halt a game’s pace, so being able to have Lara tell me what to do and then execute on it helped keep up my momentum, and actually turned these challenges into an engaging part of the overall experience.

While the gameplay is great across the board, the story and presentation is a bit more hit-or-miss. To speak first to the story, I found it, on the whole, engaging all the way through. Central to my enjoyment of the story was the villain Amaru, who is a legitimately complex and understandable character. This isn’t your average mustache-twirling antagonist, and watching his dynamic with Lara and the other characters was incredibly interesting. The overarching plot surrounding the game’s key mcguffin isn’t that special, but the locations Lara visits and the ways other plotlines interweave with your main quest is done masterfully. It does miss a few beats, particularly with regard to a certain death, but for the most part, the story is quite compelling. This interlocking narrative in conjunction with its themes is rather special, but it is diluted somewhat by out-of-place, overly bombastic set-piece moments. At times, the story sets up a huge, unfathomable scripted encounter, and while visually interesting, simply felt antithetical to the quieter, more character-driven situations around them. These moments simply felt shoehorned in, and so far outside of  Tomb Raider’s thin realism, that I couldn’t connect with these setups. Shadow of the Tomb Raider isn’t a huge narrative blockbuster, so trying to weave in scenarios of that caliber just felt wrong.

With all of that said, Shadow of the Tomb Raider is easily recommendable, and a great way to kick off the Fall. With its fantastic, multi-pillared gameplay and character-driven narrative, every second of time I spent with the game was an enjoyable one. If this type of game doesn’t speak to you, Shadow isn’t going to change your mind. From its setting to its gameplay, you’ve seen and perhaps played this before, as this is a well-worn path that you’ll be walking down, but the experience is executed very well. I’d liken the game to a well-baked chocolate chip cookie; you know what one tastes like, but that doesn’t make it any less delicious. I would’ve liked to see a few more risks taken to give Shadow of the Tomb Raider a more unique identity, but the level of craftsmanship here is impressive. I do find certain beats in the game less refined than others, but the sum of Tomb Raider’s parts is undoubtedly high-quality adventuring. Grab your treasure map and your climbing axe, and get ready for another journey into the world of Lara Croft.

This second opinion piece is meant as a supplement to Gaming Trend’s full review for Shadow of the Tomb Raider. Bear in mind that our full review was written by another author who played the Xbox One version of the game, whereas this piece was written based on my time with the PS4 version. Be sure to read that full, scored critique of the title by clicking here. Stay tuned to Gaming Trend for more on Shadow of the Tomb Raider and everything else this industry has to offer.

Abram is an aspiring games journalist with a soft-spot for titles published by a particular company that starts with N, and ends with -intendo. When he's not playing, or writing about, video games, Abram is most likely ranting to no one in particular about various films he's seen, or grabbing the sketchpad to do a bit of drawing.
Related Articles: Shadow of the Tomb Raider
Share
Tweet
Share
Submit