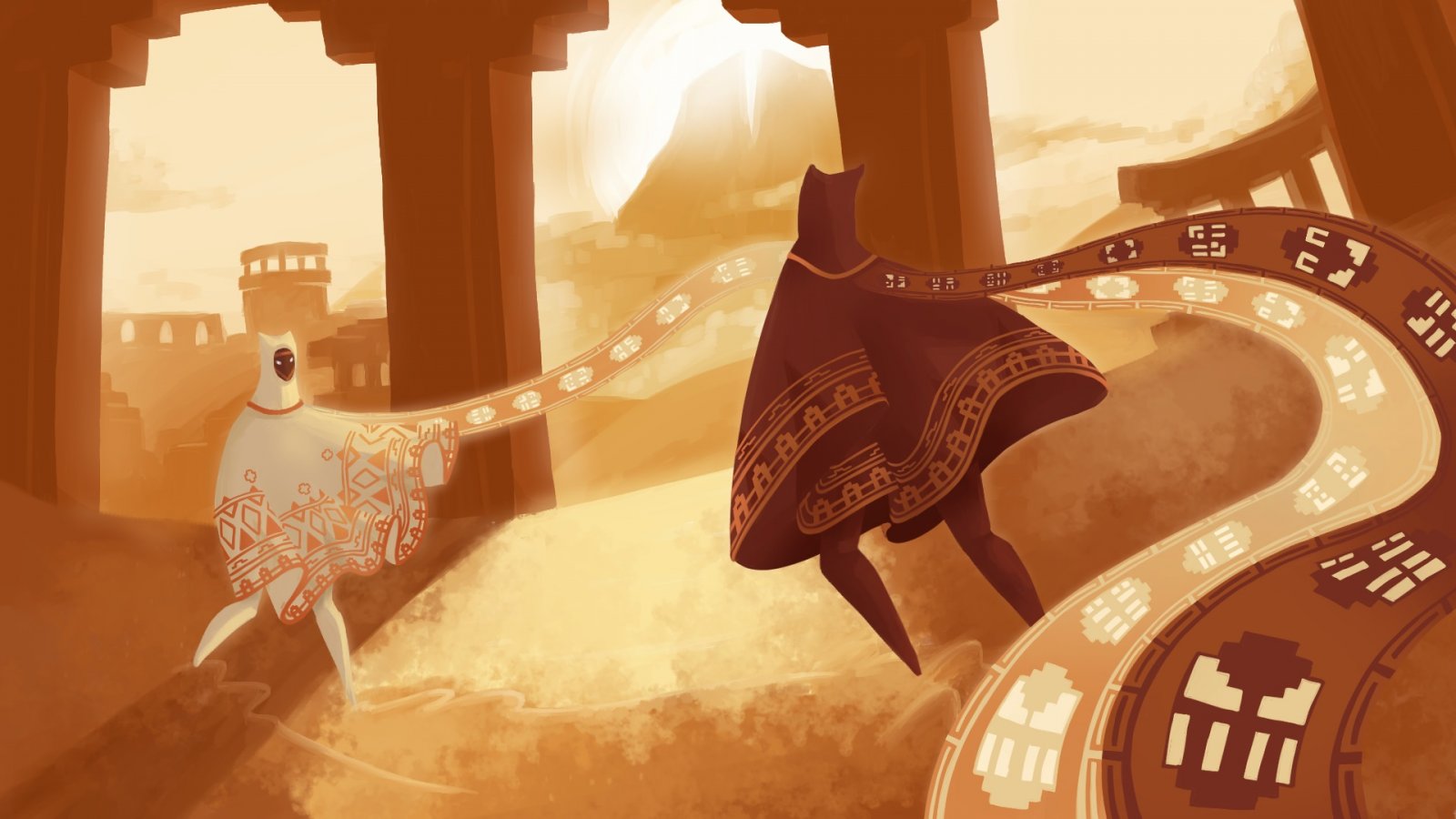 “If there is any big transformation, the biggest one is the transformation from life to death.” Jenova Chen, Thatgamecompany’s founder, said this of Journey when giving a talk at DICE in 2013, and it cuts to the center of what makes Journey so unique. The titular journey is a cyclical one where you can hear the swelling music from the opening theme start to creep its way back into the soundtrack as the player makes their way back around to start the journey anew. You don’t know why you’re in this desert but you know you need to move forward, making meaningful—if fleeting—connections along the way.

When Journey came to the Playstation Network back in 2012, it sold Thatgamecompany as a force in video games. It won accolades not simply for its impressive tech in surfing the sand dunes, its seamless online integration, or moving narrative, but for its exceptional soundtrack. It propelled the game’s composer, Austin Wintory, to relative fame in the industry. His work on Journey was nominated for a Grammy—a first for the medium—and has since gone on to score many other excellent titles like The Banner Saga and Abzû. I recently had the opportunity to see Austin Wintory perform the score to Journey live in Denver, and for as much as I already adored the soundtrack to the game, seeing it performed opened me up to a completely new way of seeing the game and the music.

Mr. Wintory has teamed with the Chicago based 5th House Ensemble to bring Journey to the stage, and, in the process, highlights what makes the score so exemplary in the first place, but it also critically enriches the overall game experience. They’ve been doing this show for a few years now, so it’s possible you may have seen this in your town, but if you haven’t, you should be on the lookout for future shows.

For this performance they obviously had Mr. Wintory onstage conducting the band (which is all I was expecting from the performance), but they also had a person on stage playing the game live with a feed of their gameplay projected behind the stage. What this means is that Mr. Wintory and the band are not simply performing the music but are rather dynamically reacting in real time to the gameplay. In a brief talk after the event, Mr. Wintory told the audience that they gave explicit instructions to the players to play exactly how they would normally play. They are not, as I assumed during the event, playing along a scripted path. Because of this, the band had to seamlessly transition between sections of music on the fly as they reached specific portions of the game. It seems a tremendously difficult task on top of the already impressive nature of the music.

Beyond simply playing the music alongside the gameplay as it was intended, the game is also connected to the internet, so they organically encounter other players in the game as you would normally. It is entirely possible that they could put on this performance and not connect to any other players, but it speaks to the longevity of the experience that on any given night, six years on from release, they could find players who have no inkling that they are playing through the game with the composer or to a live audience.

Now the soundtrack to Journey at this point hardly needs a salesman, but it had been long enough since I had played the game that it was helpful to remember just what made that game so special, and how sorely I missed the sort of connection I had to that experience. I haven’t properly played through Journey since its initial release on PS3, but in that time it’s hard to think of a game that I’ve played since that has captured the artistic authorship that was evident in Thatgamecompany’s and Austin Wintory’s opus.

For those unfamiliar or for those who have played too many games since then to accurately recall, Journey follows your mysterious robed avatar as they awaken alone in a sprawling desert. You quickly realize that you need to reach the summit of a mountain off in the distance and the entire game is appropriately about that subsequent journey to find the purpose that surely resides there. It is not terribly subtle about this journey being potentially representative of a person’s personal journey through life, as Mr. Chen made clear in his talk. It is life and rebirth. It is about the memories we collect along the way. Your character will find scattered pieces of their scarf that will add length to it until, by the end, the scarf is imposingly trailing behind you. As we traipse through life we collect experiences and memories and it is at the end of Journey that those experiences carry the player to their ultimate fulfillment and self-actualization. In Journey this takes the form of a triumphant climb above the clouds after you’ve been beaten down on the dark and stormy peak alongside the grand and sweeping tones that accompany this transition. Maybe I’m overthinking it. Maybe I’m not, or I’m way off the mark. Regardless, what is powerful to me about that game is that all of this is only worth dissecting because of the impact it had on me as a player. It made an indelible mark, and it did so without ever offering an explicit narrative. It conveys most of its deceptively rich themes primarily through the score. Austin Wintory’s score breathes life into the visuals as much, if not more, that the reverse is true.

Games’ soundtracks can be rewarding on their own to be sure. I listen to Cuphead’s or Mega Man 2’s soundtrack on their own regularly because they stand on their own as good music. Those soundtracks, though, are more complementary than foundational in the way Journey’s is. The game feels, and as Mr. Wintory said during this event, much of the particular structure of the game was built around the score the he gave to Thatgamecompany.

But it is so important that during this event they didn’t simply play the music as a separate entity, because the music is inextricably linked to the gameplay. And even more importantly, that they connected to actual live players online. When I played the game myself, as many people I’m sure also experienced, I had maybe the only real and powerful connection with an online player that I’ve ever had. By removing players names and keeping interaction limited to a simple chirp, it removes any bias or pretense that you might build about a player when their voice or online handle might color your view of them. They are simply human and because the two of you are completely alone in this world, you are emotionally connected to them and you are more inclined to want to help them and stick close to them.

Having the music performed live was interesting and fun by itself, but seeing the music reacting while it simultaneously tells this age-old story turns an already artistically vibrant game into something more akin to performance art. We were able to, as an audience, feel that same connection that the player would with the strangers you meet along the way, and feel the same urge to protect them, the same twinge of pain when they collapse next to you on the mountain top—or in our specific case—the same grief when the other player accidentally falls off the windswept cliffs just before the final snowy ascent.

This amplified my connection not only to these strangers plopped in this mysterious desert, but with the strangers that were sat beside me in the theater. We all felt that rush of adrenaline as the character slid down the hill at breakneck speed alongside The Road of Trials track’s fast paced flute and soft percussion. We all jumped when the standing drum shook the room for the beginning of Atonement right as the player was approaching their fiercest struggle in their journey.

I really just wanted to use this experience as an excuse to talk about Journey and its soundtrack, but it heightened an already transcendent experience to better reveal the heart of Journey and the meaning behind both Jenova Chen’s game and Austin Wintory’s score. For me personally, it never reaches Thatgamecompany’s poignant and beautiful transcendentalist masterpiece, Flower, but looking to assess which is better is probably a fool’s errand. Jenova Chen has said that his aim was to make games which tap into different emotions than are usually covered by games. Instead of simply looking to empower players, it means to connect them. Not literally over the internet in the way online shooters may do, but in an almost tangible and thoroughly emotional way.

Getting to the end of the journey makes you consider things in a way most games don’t even aspire to do, but it does this because when you crest over a sand dune or you slowly succumb to the elements and collapse into the snow, there is a score that gives weight and gravitas to the whole experience. But what makes this so important gets to that idea that Jenova Chen set out to achieve when he founded Thatgamecompany. He says of entertainment that, “it is like food, a supplement for human emotion.” He wants games to fill more roles than simply tools for empowerment, but to also provide a richer diet of emotional nourishment. Whether or not he is successful at that is up to each person, but being present for this unique form of video games as performance art that Austin Wintory and the 5th House Ensemble has constructed adds a new wrinkle to the conversation for me. Obviously this isn’t possible for all games (nor should it be) but it does present an interesting new way of thinking about what music can do for games and how games can implement their soundtracks to not only provide a frame for the experience, but how it can be the very canvas that the game is painted on.

If you are interested in seeing the event for yourself, they are still performing, and I urge you to check for any upcoming shows. It is a musical performance like none I’ve seen before with a dynamism and electric current carrying it that isn’t present for more static setlists of popular artists. And obviously, if you haven’t already, download Journey and see for yourself what I’ve been rambling about.

Nathan lives in Colorado catching Pokemon on the Go and at home. He previously spent three months interning for Game Informer before coming back to Gaming Trend to spread the good word on video games. His real passion, though, is collecting different versions of the 3DS and other weird Nintendo garbage. It's a never-ending quest for less space in his house.
Related Articles: Culture, Journey
Share
Tweet
Share
Submit