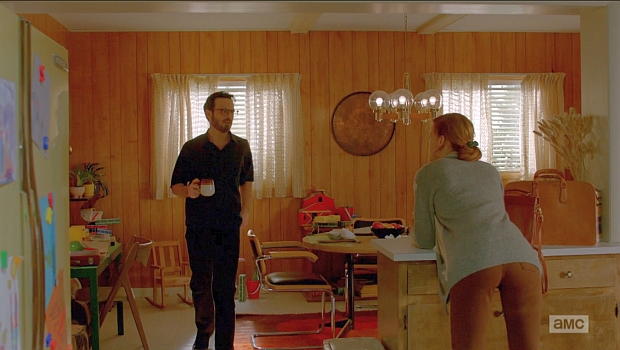 Television is taking the opportunity of low summer viewership to gauge the tolerance of the censors. Five of George Carlin’s seven words are now regular parts of speech on many cable networks, which are scrambling to recapture share lost to HBO, Netflix, and other premium offerings.

Battling low ratings and critic neglect, Halt And Catch Fire seems a little bit desperate to draw attention to itself. The challenge this show faces is that it’s a period character drama, and the events must make sense in context. In the same vein, any buzz the show hopes to create cannot be implausibly depicted given 1985 attitudes and proclivities. There isn’t a lot you could do thirty years ago that would shock anyone today, but one of those things did happen to Donna in last week’s episode, 10Broad36.

Gordon and Donna haven’t exactly been on good terms since he wrote the Sonaris program, which was blamed for nearly destroying the Mutiny network. Donna has worked day and night trying to restore both the fledgling company and her credibility, and her family has suffered for her absence. Then she somehow got pregnant, by Gordon of course, although I don’t remember any scenes of intimacy between them this season. Now she is battling traditional gender roles while trying to lead a company in the primordial confusion of pre-Internet online gaming.

The obvious path for a married working woman in 1985 would be to tell her husband and coworkers she’s pregnant, work another nine months, have the baby, take a short but expected leave of absence, and then go back to work. Thanks to Gordon’s share from Cardiff Electric’s sale, money is not an issue; they can easily afford a larger house and live-in help. For Donna, and almost any woman in her circumstance then or now, there would be no consideration of an alternative path. But that’s not good television.

Donna gets an abortion. She does not tell Gordon – he didn’t even know she was pregnant. What’s most shocking is not that she had an abortion, it’s that she made the decision so matter-of-factly, with virtually no on-screen consternation. She had one emotional outburst at Joe when he came to Mutiny to beat them up over mainframe pricing. That was clear frustration stemming from further loss of control over events in her own life, but other than that, she appeared to choose to terminate her pregnancy in a distinctly masculine fashion, walking into Planned Parenthood with the same conviction as a some guy going to the hardware store.

As for Gordon, he’s reeling from his diagnosis, and goes to visit his estranged brother in California. By chance (?), he runs into an old crush from high school, and one thing leads to another. Like Donna, he appears to have no compunction from breaking his marriage vows, and the audience is left to wonder if his lack of morals is related to his degenerative brain condition, or if, like the American public’s attitude toward profanity, sex, and violence, he just doesn’t give a shit.

In Gordon’s defense, he was not maliciously cheating on Donna – he just needed someone to bare his soul to, since he couldn’t bring himself to burden his wife with the news of his condition. And to be fair to Donna, she’s also the “mother” at Mutiny, and the company would probably fall apart in her absence. The episode ends with Donna singing a lullaby to her daughters over the phone, which also comforts Gordon. A lot of emotion is conveyed in this short but powerful scene. Can these characters reconcile? I hope so.

While Gordon and Donna are playing the emotional overtones, Joe has engineered a path back into Cameron’s life full-time. At the behest of old man Wheeler, he dictates new pricing terms to Mutiny for mainframe bandwidth. Donna, in her outburst and follow-up negotiation, manages to get Joe to agree to a lower price. What she doesn’t know is that Wheeler gave Joe the authority to go to that price without additional terms, but Joe takes the opportunity to make demands on Mutiny. He wants them to be more than just a gaming platform.

Joe’s actions in this episode are reminiscent of season one. I noted in the previous review that the old Joe was back – no more pretense that he had changed. With Sarah’s rejection of him, he now has carte blanche to treat people as cogs in the machinery of his ego. In an effort to obfuscate and maintain ultimate control of Mutiny, Cameron and Donna decide to try to fool Joe into believing they are meeting his demands. They work harder to cheat than they would have just doing what he asked, and Bosworth calls them out on it, to no effect. Joe sees through the ruse and acts insulted, but what he really seizes on is that in their ingenious attempt to deceive him, Mutiny has cleverly implemented broadband across a local area network. He takes this information back to Wheeler and proposes they acquire Mutiny.

I like to get these reviews out the same week the episode airs, but I felt 10Broad36 was the start of a play in two acts, with all the major characters standing at the precipice. I wanted to see what would happen in episode seven and then present the full context of events. The season has clearly been building to these points, with the final four episodes revealing the resolution or dissolution of the character and plot entanglements. I’m glad I waited.

Working for the Clampdown opens with Gordon finally telling Donna about his brain damage. She is devastated, the weight of her secret pregnancy and abortion crashing down on her as she realizes her husband may be dying. Anyone who has lost a close loved one to cancer knows the feeling when you learn of the diagnosis. There’s a clock that starts, and time really matters. Nothing is more important. Donna is feeling that now, and Kerry Bishe’s acting is convincing. She tells Cameron she needs time off, effective right away, but cannot bring herself to say it’s because of Gordon.

Later in the episode, when she’s struggling to work from home with all the distractions, we see just how much they love each other. Tragedy tends to bring people together, but I think in this case these characters felt this way all along and were strained by events which, in the larger view, were relatively insignificant. Only by compounding those stresses – Gordon’s infidelity and Donna’s abortion – did they take dramatic steps away from each other. Still, there are moments in this episode where it’s clear they both want to be truthful to the other; their relationship has the strength to weather the storms if they don’t wait too long.

Gordon’s custom-build PC business finally gets off the ground. He’s reassembled his team from Cardiff and sells them on his vision, then he makes his first real sale to a customer. His condition is obviously advancing, and in a confused lapse he believes it’s still 1983 and they have just completed work on the Giant.

Joe arrives at Mutiny to pitch the terms of acquisition. I don’t think it’s plausible that Jacob Wheeler, an oil tycoon, would buy in to a startup online gaming company based out of somebody’s house, no matter how many subscribers they had. There is no corporate synergy that we are aware of – no ability to leverage existing resources beyond the availability of the mainframes that would suggest this is a smart or shrewd business decision. Indeed, after Joe embarrasses Jacob in front of Sara, the old man changes his tune about the terms of the acquisition, giving credibility to the rationale that Jacob was only interested because his future son-in-law thought it was a good idea.

The episode takes a couple gut-wrenching turns. Joe is Joe at his Cardiff Electric best, selling the future by telling Cameron, Donna, Bosworth, and Tom exactly what they need to hear. To Bosworth he sells redemption; to Donna, structure; to Tom, financial freedom; and to Cameron, he sells the control over their working relationship that she did not have at Cardiff. It reminds me of the Wizard of Oz promising their hearts’ desires to Dorothy and her gang of misfits, if they only do one thing for him first.

Initially Cameron balks and gets the coder-monkeys cheering her pirate spirit. Then they find out Joe offered five million dollars. That would make all of their “shares” in Mutiny actually worth something. Will Cameron talk the talk or walk the plank? See what I did there?

Lev, who has been courting a “fella” online, finally arranges a meet, only to get lynched for his affections. He survives but is badly beaten. Cameron is shaken, and when Tom admits that his family is dirt poor, and that even though it’s not about the money, it actually is about the money, she has a change of heart and agrees to sell.

The next morning Cameron finds Joe giving his sympathies at the hospital, and he reminds her (and the audience) that he’s bisexual, recalling an event from his youth when he was tormented for being different. After realizing that Jacob Wheeler has no intention of honoring the terms that Joe negotiated with Cameron, he tells her not to sell. It’s her company; don’t let anyone take that away from her. Not this time. He also tells her she was one person who he could be himself with. It is as close as Joe can get to asking forgiveness.

The other person he claims he can be himself with is Sara. Joe tells her he is quitting Westgroup. She wants to get married, today, and be in California in two weeks. Joe happily agrees to her terms. But why? What does Joe truly want? Did he really use Sara to get to Jacob, to get to Gordon, to get to Donna, to get to Cameron so he could then burn the bridge with Jacob, to get in better with both Cameron and Sara? Is it possible Joe is that diabolical? I don’t see how, and he certainly didn’t want anyone to get hurt.

Halt and Catch Fire isn’t just another retired computer mnemonic from a bygone era. It represents the consistent message of the series: control. These two episodes demonstrate the theme at it’s most dramatic. Donna and Gordon fight for control over their own bodies and the sanctity of their marriage, and Joe and Cameron fight for control of Mutiny, reconciliation with the past, and to be the architects of the future.