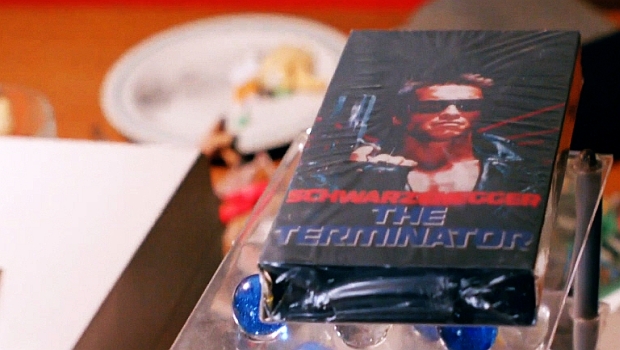 “Son of a bitch.” Those are Sara Wheeler’s words, and that’s how this episode begins, with Sara cursing out her father for daring to send a premarital agreement for Joe to sign. Those were also my words when I saw she’s still in Joe’s life. The only thing interesting about her is watching the tiny actress interact with regular-sized objects. She steps up to a kitchen counter that comes up to her shoulders, and the contract, written on standard legal, looks like a movie poster in her hands. (I’m six-foot-six, and have the opposite problem in life.)

The scene deftly switches to another couple, Cameron and Tom, naked and buzzing in the afterglow, chattering about how they’re going to render a first-person shooter across networked Commodore 64s. Read last week’s article if you want to know how likely I think that would have been. (Spoiler: not) Tom says “dial-up” as if there were alternatives. I still don’t know who the target audience for this show is supposed to be, but the writers are doing it a disservice by trying to dumb it down for millennials. They aren’t watching anyway.

There’s a cool recurring bit of 1985 pop culture hopscotching the episode. The Terminator just came out on VHS, and Tom wants to watch it with Cameron. But the future is not set. At this point, I kinda want to watch Arnold waste some people. I’ll be back (to finish this later).

I’m back! That is such a great movie. Kyle Reese and Sarah Connor are soooo overmatched against the Terminator. It can’t be bargained with, it can’t be reasoned with. It doesn’t feel pity, or remorse, or fear, and it absolutely will not stop, ever, until you are dead. And speaking of Joe MacMillan, he finally tells Jacob Wheeler about his designs to lease the mainframes. The old man is impressed, but wants to meet someone from Mutiny face-to-face, like a gunslinger or something.

Gordon finally spills the beans to Donna that Mutiny is getting its mainframe time from Joe. Donna tells Cameron and then Gordon has to tell Joe to tell old man Wheeler, who then forces Joe to tell Sara, who instantly connects the dots back to Cameron. It’s like a grade school rumor mill about so-and-so doing such-and-such with what’s-his-name inside the jungle-gym at recess.

Donna’s Community space is turning into the original Craig’s List, complete with private rooms for hookups. Lev (August Emerson), is chatting with a guy, when Bosworth leans in and outs the poor kid. Comedy ensues:

Oh and Gordon has degenerative brain damage after years of sniffing soldering fumes so he calls Donna to ask her to dinner to break the bad news but she’s still stinging from the Sonaris debacle and the network secret and the unscheduled pregnancy as well as Cameron’s general disgust for her husband and she blows him off which drives him to go to a dance club they used to party at before they got married and he imagines that she’s there but it’s just some other young woman who probably thinks he’s weird and when he tells her he’s dying she says “me too” which only makes him feel like shit and then the next morning after Donna gets done barfing because of her morning sickness Gordon asks her to lunch but she’s still really pissed at him and of course he doesn’t just come out and say to his wife that he has brain damage so he decides to reach out to his estranged brother to reconnect with his family in case he soon can’t remember them or dies or something. Anyway…

Dammit, where are all the shoulder pads? Everybody who was anybody wore shoulder pads in 1985. I’m not sure it was possible to buy a woman’s blouse or a man’s suit jacket without them. Details, people. Here’s a short list of things I need to see: Parachute pants, windbreakers, turtlenecks, toaster ovens, “Where’s the beef?” tee-shirts, TV dinners, The A-Team, Tina Turner, I Want My MTV, the ozone hole, Trapper-Keepers, Back To The Future, and superhero Pez dispensers.

Joe arranges for Cameron to meet Jacob Wheeler. There’s a frosty scene in reception between her and Joe, but Cameron has brought her “A” game. Wheeler likes her moxie, charm, and intellect. Who doesn’t? Well, Joe is suitably impressed, doubly so after Sara finally tells him she can’t deal with his “secrets,” and the engagement is off. +1 to the body count for Joe “Terminator” MacMillan!

After Cameron escapes Joe’s clutches in the parking garage she has to save Bosworth, who can’t pay for his dinner date with his ex-wife. Cameron’s in a foul mood, and when she learns he fired one of their past-due customers, she refers to Mutiny as a “community. It’s my community.” She’s stealing the words right out of Donna’s mouth. I wonder how that change of heart will go down with the redhead.

Once again, we see Cameron holding her creation close, warding away anyone who might try to change it, however well-placed their intentions. I’m not sure what to make of this particular character trait of hers. It’s within her right to feel maternal toward Mutiny, but in a way, Mutiny is also the bastard child of Joe MacMillan. She feels like she’s losing control again. She’s probably right.