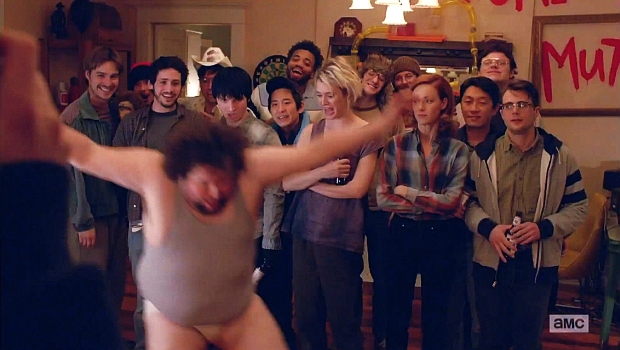 Happy funtime Gordon is back, sniffing chalk and running around in his vintage orange full-body Adidas track suit. He’s cross-pollinated with Louis Tully from Ghostbusters, becoming an irritating little guy who can’t stop talking about the virtues of fiber. By the end of the episode he’s questioning his fleeting immortality. Just like the Eighties, it was totally radical while it lasted.

Dana, err, Donna, is annoyed but somehow doesn’t have a clue that her husband is a junkie. At the moment she’s preoccupied by the slow-motion accident that is Mutiny, and a mysterious sickness that comes in the morning. See what I did there? This clever development was foreshadowed in the first episode of the season, in the scene when Donna and Cameron go to the bank, which rejects them for fear of a “biological imperative.”

My favorite thing about series like Mad Men, Breaking Bad, and Halt And Catch Fire is the journey; where are these characters taking us, and what’s driving them in that direction? “Play With Friends” gathers all the loose ends from the first three episodes. It doesn’t go so far as to tie them together, but now at least we where we’re heading.

Joe has struggled to free himself from Sara’s event horizon, but he is now seeing the light of other days. There’s an odd way about him, like he’s elevated his sociopathic nature to a new level. He meets with the head of the Networking and Computer Systems for Westgroup, the oil company his unlikely-to-be father-in-law presides over. Wasting no time, Joe insults the guy while expounding on the ingenuity of his plan to lease mainframe resources. The guy regurgitates something about “security,” but Joe athletically avoids caution. Following this latest rebuke he decides to take matters into his own hands.

Since Cameron stopped taking Gordon’s money, Mutiny is broke. She’s a brilliant coder but a terrible business person. She hatches a plan to pay her employees in “shares” of the company, which she promises will someday be worth a lot more than money. Loveable Yo-Yo isn’t buying in. He looks like a man that enjoys eating, and a couple pieces of paper with Mutiny letterhead won’t buy a box of Count Chocula at the grocery store. Cameron never really understood what motivated him. Yo-Yo was in it for the thrill, just like she was at the beginning. It’s all become too real now.

Enter John Bosworth. Bos represents the potential of Mutiny to actually turn a profit. He gets Cameron and Donna to change the narrative with smarter imaging. He then takes charge of saving the “whales,” the biggest spenders who cancelled their subscriptions after the Sonaris debacle. Bosworth normally steals scenes with a catchy monologue. This time it’s his sweater.

If you remember 1985 as well as I do, you’re probably questioning all this revisionist history around “online gaming.” I hate to say, “It’s just a TV show,” but the writers keep reminding us that they either don’t know enough to be technologically consistent, or don’t care, or think that historical accuracy is boring. As if apologizing to all the forty-year-old nerds out there, Cameron argues with a customer and drops a line about CompuServe. In doing so, the show gives us the model for Mutiny and also Joe’s mainframe time-sharing scheme. CompuServe basically invented real-time chat, made electronic mail a practical reality, and created a file-transfer protocol that enabled interactive GUIs across a network. Now that I’ve written it, I agree with the writers. History is dull.

Joe shows up at Gordon’s house to pitch his time-sharing idea. He needs Gordon to do something to the Westgroup mainframes. Initially Gordon declines but later Donna tells him that Mutiny is going under unless they can find more bandwidth on the cheap. Well isn’t that a coincidence? Gordon agrees to do the job, even after he realizes it’s illegal, as long as Mutiny gets in on the deal. Joe is all too eager to make that happen, knowing it brings him closer to Cameron, which may be his ultimate goal for this season. His mouth is always sputtering words like “the future,” and “forward-looking,” but really he’s only thinking about the past.

The real question is why Gordon is going along with it. From the first season, we know Joe loves to be caught doing bad things. He craves the attention and the opportunity to manipulate others, typically through blackmail or some other nefarious tactic. It should be obvious to Gordon that Joe will be caught, but it’s possible that Gordon believes Joe will dodge the prosecutorial bullet once again since he’s engaged to the daughter of the company president. In the end, the Cardiff situation worked out well for Gordon, so why not bet on Joe one more time?

Cameron conceives of a first-person shooter than can be played online on the Commodore 64. At the time, the only 3D commercial games were tank and flight simulators using monochrome vector graphics, so her idea would have been as revolutionary as it was impossible given 1985 technology. Interactive networked shooters were not practical until the late Nineties. *sigh* It’s just a TV show. There’s a great scene near the end with Cameron stalking coder monkeys with a Nerf gun, in a Rambo meets Doom kind of style. I’m dying to see them render that across a 300 baud modem on a C64.

Tom is taking on a leading role in the show. He matures into a love interest for Cameron, after saving her from a panic attack and being generally endearing at all times. His charm belies a sinister nature that we’ve only had fleeting glimpses of. I still believe he was the mastermind behind the security hack that nearly destroyed Mutiny. I also think that the scene from the beginning of this episode with Joe and the company dog who voiced concerns about mainframe security was foreshadowing. If Tom is the diabolical villain I think he is, then connecting Mutiny to the Westgroup mainframe gives him an incredible opportunity to do a lot of damage and gain serious hacker cred in the process.

On a related note, the whole Sonaris plot point was patterned after real-life hacker Robert Tappan Morris. Morris wrote a program that infected thousands of networked computers, and later claimed he was just trying to find out how big the Internet was. Morris is now a tenured professor at MIT, which proves that crime pays, as long as you’re a condescending ass.

There is an interesting yin and yang emerging this season. Joe and Gordon are playing fast and loose with business and personal ethics, and Cameron and Donna are trying to succeed playing by the rules in an industry dominated by men. These two forces are connected in ways that are both mutually beneficial and destructive. I’m excited to see how this duality ends.