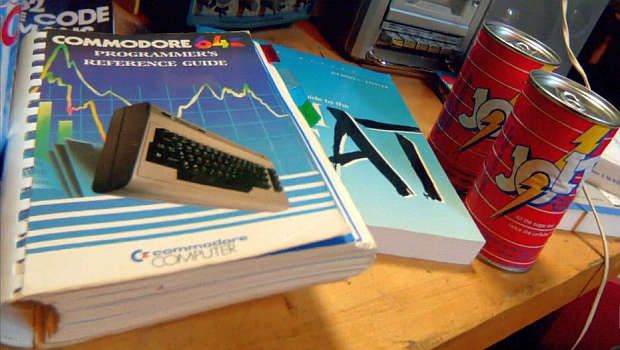 Frankly, season two of Halt And Catch Fire is taking its sweet time living up to the inaugural season. The first season followed a standard algorithm. Rapidly increase dramatic tension through complex character motivations and clever dialog, allow a scene to boil over, briefly cool and repeat. No relationship or plot point fully resolved, and every success generated more conflict. Thematically, it was a bold television drama that kept me wanting more. Just as importantly, the writing rarely felt arbitrary or unintentional. Not every reference needed to be profound, but the viewer was continuously treated to story elements that contributed to the greater picture.

There have been precious few breakthrough moments offered by the writers this time around. “SETI” had its clever opening walking shot, badass versions of Cameron and Donna, and Joe finally getting his comeuppance. “New Coke” was blessed with a beautiful title, and featured main characters geeking out over Commodore 64s. The problem with the first two episodes is that the character relationships appear to be on obvious paths. The tension feels forced; Joe and Sara are so obviously wrong for each other, Cameron and Donna are butting heads over stupid stuff, and Gordon is just trying to figure out what to do in his free time. No wonder the ratings suck. This week’s episode, at first pass, feels like filler. But then I watched it again, and found a moment of genius.

Sara has moved to Dallas with Joe. Tall, dark, and disturbed decides he wants to have a dinner party, which his girlfriend agrees to, even suggesting Joe invite his “friends from Dallas.” In the next scene, Gordon and Donna are listening to Joe’s invitation on their answering machine. They take turns speculating on what Sara is like. While Donna paints the picture of the stereotypical dumb blonde model-type, Gordon imagines Joe hooking up with Joan Baez. Absolute genius.

So what, you say? Not only is Sara the spitting image of a younger version of the singer, Baez’ most famous song, Diamonds and Rust, is basically a tone poem describing Joe MacMillan. These two beautiful stanzas fit him perfectly, and foreshadow Joe and Cameron’s relationship.

There are rare television moments where the audience is treated to the birth of a star. Here we glimpse the origin of the character Joe MacMillan, and in that glimpse we can see his past, present, and future. It is for moments like these that I love this show, and forgive its many faults.

This is as much of a Sara episode as we’re likely to get. The Joan Baez reference gives her immediacy, and the connection to her father breathes new life into Joe’s forward-mindset. He’s been struggling against his own nature, defying his innate compulsion to put his own “ding in the universe.” Sara is like Ritalin for him, but he’s growing impatient with the treatment. When Gordon and Donna arrive for the dinner party, Joe easily relapses to old behaviors. Sara confronts him in an unintentionally comical scene – the actress is child-sized – but reveals that she is just as insecure about their relationship as he is.

Meanwhile, at work, Joe is reaching his boiling point. His manager is a guy who doesn’t question the way things are, and is content to do his job and then separate from it when he goes home. In other words, the guy is normal so Joe can’t understand him. God forbid anyone have a hobby; Joe has no space in his life for people who aren’t completely consumed by some grand design. It’s why he fits so well with Cameron and Gordon, and not at all with Sara.

By the end of the episode, Joe has pulled rank and been given permission to take over the department and fire his boss. He’s just about to do it when he realizes the mainframes only run eight hours a day. Why are they running according to human schedules? They are machines – treat them like machines. The machine that represents Joe’s true nature is switched back on. The real Joe MacMillan is back.

Gordon has completed his network-mapping program, and he turns it on without a lot of thought. Not long after, the Mutiny network suffers a catastrophic security breach. Not only are their drives wiped, but the drives of every connected user are also wiped. This scene is absurd. Once again the writers demonstrate they are only capable of occasional brilliance, interspersed with periods of laziness. No one in 1985 would have lost any data. There were no “drives” to “wipe.” All data was stored on diskettes, so all anyone connected to the network would need to do is turn their computer off.

If I really want to get nitpicky (and I do), Gordon never actually executed his program. There’s a shot of the monitor when he activates his program. It reads:

But that would have generated a syntax error on a Commodore 64. The actual command is:

Without the “,8,1” the computer doesn’t know where to load the program from. I don’t think it would have confused the audience too much to have been accurate. Commodore nerds like me go ballistic over this stuff. Anyway, this proves that Gordon didn’t actually cause the attack on the Mutiny network. Ta-da!

Earlier in the episode Cameron is handing out floppy disks like candy, so we know that everything Mutiny has produced is backed up multiple times, yet when the attack occurs everyone reacts as if the Soviets just nuked Dallas proper. Gordon takes the blame, fracturing the already uneasy relationships between himself, Donna, and Cameron.

At the end, Cameron is consoled by Tom, who had previously lashed out over the lack of ingenuity at Mutiny. That clue combined with Tom’s prior hacks against the network suggest that Tom may have actually perpetrated the cyber-attack and not Gordon. Tom’s motivation is to create Mutiny according to his grand design, resurrecting greater technology from the ashes of Cameron’s dream. Sound familiar? It’s like Tom is reading from the Joe MacMillan playbook on how to realize the future. First destroy someone else’s hard work, then bend those same people to his will and expect to be worshipped for his genius.

I’m only speculating that Tom killed the Mutiny network. I hope we get to see Joe vs Tom with more at stake than just Cameron’s affection, but even without that intrigue, these scenes are still relevant for how they portray Cameron’s role-reversal. Now she’s the boss and has a business to consider, but she’s taken in a poison pill that wants to completely change everything and is willing to use underhanded tactics. We’ve seen her freak out; can she pull it together and save her fledgling company?

More evidence that the world is upside-down is Joe’s casual appearance at the dinner party. Gordon and Donna come dressed to the nine’s while Joe and Sara lounge in t-shirts and jeans. Is this the new Joe, the Joe Sara wants him to be, or the Joe trying to manipulate perceptions?

And then there’s Bosworth, who is sleeping with his ex-wife but is held at arm’s length from the rest of his family. It’s clear he is not welcome back home, and is not even allowed to attend his son’s wedding rehearsal. In a heartfelt scene, he gives his prize possession – a vintage Mustang his lawyer kept for him while he was in prison – to his son. Unburdened of connections to his past, Bosworth is resigned to start over. The preview shows him reconnecting with Cameron, just in time for both of them, perhaps.

I hope that when the season is over we can look back and see this episode as pivotal – the point at which all future events were set in motion.