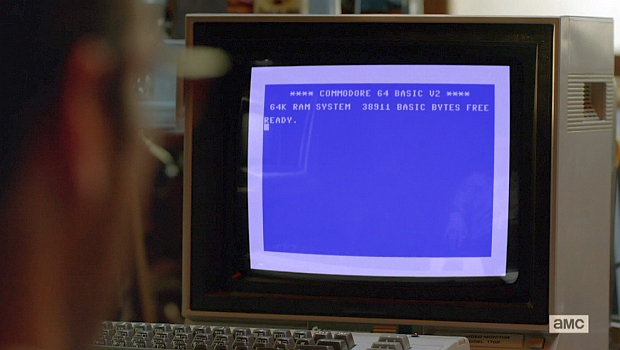 I love this episode title. In April 1985, Coca-Cola nearly committed suicide by introducing a reformulated, sweeter version of its flagship beverage. It lasted all of three months before the public outcry helped the company realize that not even the blind taste anything blindly. Branding and loyalty matter.

In that spirit, we find Joe knocking around in a bleach-white hangar filled with museum piece aircraft, trading corporate war stories with his fiance’s father, Rich Oilman, who also happens to be the villain from Jason Segel’s 2011 Muppets reboot. Actually, the character’s name is Jacob Wheeler (James Cromwell), but that hardly matters. He is an all-too-easy to digest Texas tycoon whose raison d’etre is to act as a foil for poor Joe, who just can’t seem to catch a break this season, even as the job Jacob offers lands him back in Cameron’s area code. So much for all that babble about the future; Joe is starting to realize he’s made a serious error with Sara. Recapping, he proposed from his heels to a well-bred woman who lives in the moment and with whom he has nothing in common. I’m gonna bet against this romance making it to episode four. We might care if her character wasn’t so boring.

Donna has invented online chat, but she forgot to tell the nerd on the other end of the network that she’s female, so it’s off to a slow start. Strangely, Cameron does not see the value in the idea. For the first time in her life she appears to actually be concerned with what her team is spending their time working on. Is it just another power play to piss off Donna, or is she simply too enthralled by her own vision of the future to permit the creativity of others? I really don’t think her mistreatment of her business partner is intentional, and Donna is showing a lot of patience. There’s a neat mentoring thing going on here that offers Cameron a ton of growth potential. She is the show’s most dynamic character.

On a related topic, can AMC screw up the marketing of this show any worse than it does? Halt And Catch Fire features two awesome women, both highly intelligent, savvy, and driven to succeed in a male-dominated industry. Yet AMC cannot figure out how to make this show appeal to up-and-coming women hungry for exactly this kind of female-led character drama. I’m convinced the network only knows how to sell to adolescent boys. They just sit back and hope that word of mouth and social media fills the demographic gaps, like it did for Mad Men. I don’t see that working for this show – the audience for this niche is much smaller, and it’s missing a Don Draper-type character with universal appeal. If Don Draper was a 30-year-old single malt Speyside Scotch whisky, then Joe MacMillan is a Tennessee blend. He’s tolerable, but his flavor profile is like gasoline.

Back to the show. Bosworth shows up at Mutiny but is treated like a crusty, out-of-touch old guy by the coder monkeys, so he bails to go find himself. He is clearly out of place, but only because Cameron is running an asylum instead of a company. I really thought this would be a good fit, but Bos is way too normal to be managing all these goofballs. Bos will be back.

Gordon is like a bored kid at Christmas that got every toy he wanted, and is unhappy because there was no surprise involved. One of those toys is a beautiful Commodore 64, filling his garage with warm blue hues, awaiting his command. Here’s a brief history lesson: Long before Apple was the most valuable company on the planet, and before Microsoft dominated market share with Windows, the single most popular computer of all time was the Commodore 64. Well over twenty million C64s were sold worldwide. Almost every person in America either had one in their home or had access to one at a school or local library. While Apple II’s sold for as much as a thousand bucks or more, consumers could get an equally powerful C64 for $199. Ultimately, the pricing strategy killed margins and the R&D budget, and then Commodore itself. Apple, on the other hand, did not participate in the price wars of the 80’s, and so it had enough cash to remain solvent until Steve Jobs came back and reinvigorated his company’s future. Will Halt And Catch Fire’s incarnation of Jobs – Joe MacMillan – return in time to propel Mutiny into the future? Unless Joe truly is a changed man, his tendency is to destroy what he creates.

His brain buzzing on wacky dust, “Gordo” discovers that Mutiny’s tank game is broken. We’re reminded of how smart he can be when he’s not having a nervous breakdown, and it offers a funny scene between Gordon and his engineer buddy Stan (Randall P. Havens). Nine hours into their marathon geek-out gaming session, Stan declares that he’s going to take his shot at the future and move to Silicon Valley. That’s enough to scare Gordon straight, and at the end of the episode he’s tossing his cocaine into the trash, which is exactly where nobody should ever dispose of illegal narcotics. It’s too bad, happy-hyper Gordon is fun to watch. Much better than angry, depressed, bad drunk Gordon from last season.

Since Nancy Reagan’s “Just Say No” to drugs campaign, there have been about 43,268 television episodes dealing with drug abuse, and only a handful have dared to portray it as anything but an absolute evil. I’m not promoting illegal drug use, only the idea that Gordon’s cocaine addiction could be written differently than conventional drug storylines. Maybe it’s enough to show that Gordon is really a stimulation junkie, and it doesn’t matter the form. For him, “New Coke” is creating a map of the entire public data network. Those clever writers.

Cameron and Donna go in search of more cash and are treated to some good old-fashioned sexism from the loan manager at the bank, who is reluctant to compete against a “biological imperative.” (That means making babies, ‘cuz they’re women.) When they get back to the house they learn that their system has been hacked. They go to confront the guy and he offers them both a beer. The guy is totally rad! Tom Rendon (Mark O’Brien) is being set up as the alternate love interest for Cameron. Who will win Cameron’s heart? Will it be Joe, the strikingly handsome but flaky egomaniac who’s already broken her heart once, or Tom, the intriguing young genius programmer with no pretense? She hires the hacker without running it by Donna, who is ready to sue the guy. These two need to take some pointers from Cliff and Claire Huxtable on how to work together as equals.

The episode is thick with hints that the action could be migrating to Silicon Valley. I thought that’s where it was heading at the conclusion of season one, but a transition of a few episodes is appropriate. Hopefully the story runner isn’t waiting for season three to make a bold move – the ratings are not very good. This show needs a cult following, but I’ll be darned like a sock if I’ll do AMC’s work for them.