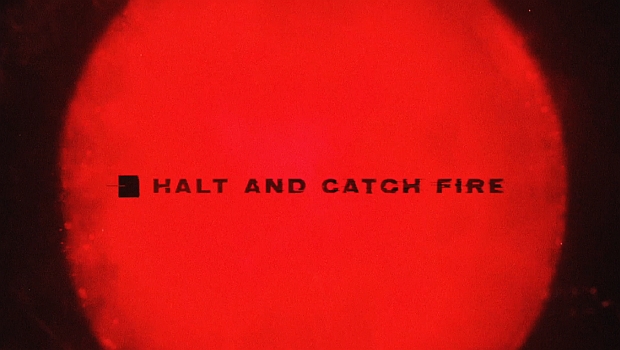 The Season One theme of Halt And Catch Fire comes in the form of a question: What separates man from machine? The answer, offered with painstaking authenticity over ten beautifully crafted episodes, is that man is searching for something more (before you start singing that awful song by The Killers, I’ve hit that pipe. Trust me, Just Say No).

The Season Two premiere is therefore appropriately titled “SETI,” the Search for Extraterrestrial Intelligence. If S2 plays out similar to S1, where the definition of the mnemonic “HCF” foreshadows the inevitable implosion of the relationships between the three primary characters, then this season will be about the turbulent relationship between Cameron and Joe. Last year we watched them abuse one another verbally and emotionally while humping like tigers, claws and fangs bared, rending flesh.

In that light, the opening scene of this episode feels like a vulgar betrayal of the characters. In a flashback to the days after episode seven of the first season, Joe and Cameron are shown having a tender moment, playfully touching and loving one another. IT COULDN’T HAPPEN! These characters were incapable of such emotional security, especially with each other. And let’s not forget that Joe bats for both teams. The previous love of his life was a man who walked out on him when Joe couldn’t handle being in a committed relationship. We’re off to a shaky start.

Flash forward twenty months. I hope, unlike me, you were not excited to see 1984. Ahh, 1984, the year of The Cosby Show, Carl Lewis and Mary Lou Retton, Ghostbusters, Ronald Reagan’s landslide, the Apple Macintosh, AIDS, Hulk Hogan, Dr. Demento, Where’s the Beef, Megatron, the fourth grade—oh wait, that was just me. It was pretty much the greatest year ever. And they skipped it. I guess 1985 wasn’t so bad, but there’s a big difference in the aesthetic, which the show so masterfully recreated during the first season. It looks like the set designers watched a “thirtysomething” marathon before building locations.

Anyway, the next scene restored my faith in God, or at least my faith in the writers that Halt And Catch Fire is still worth watching. There’s a brilliant three-minute single camera shot, uncut and uninterrupted. Donna Clark (Kerry Bishé) is walking through Cameron’s house, which is infested with the coder-monkeys of Mutiny, the company she created. The house is a makeshift server farm before any such thing existed. It’s crammed full of IBM XTs and Commodore 64s. Chances are, if you sold your vintage C64 on eBay last year, it is now on this set. It is a glorious, true-to-life representation of what the pre-dawn of the Internet age actually looked like.

In the town I grew up in, half a dozen guys ran Bulletin Board Systems (BBS’s) out of their homes on their Commodores. Modem bandwidth was measured in baud instead of gigabits, and the typical page with graphics downloaded in one to two minutes. Text-based interaction was the only “online” gaming. If you were really lucky, and you had a super-expensive 300 or even 1200 baud modem, you could play checkers or something with very limited graphics. Even then, the screen was most likely painted in grayscale ASCII characters instead of pixelated color.

If you millennials reading this think that sounds like the Stone Age, remember we’re only talking about thirty years. We Gen-Xers are the ones who straddled the paradigm shift between the analog and digital age, and it’s been a helluva ride so far. Halt And Catch Fire has, for the most part, faithfully portrayed life at the precipice of that shift.

At the end of last season, Donna joined Mutiny as Cameron’s business partner. While the younger blonde gets to be the brains of the operation, Donna is stuck babysitting and paying bills, and she’s sick of it. When they blow the local power grid Donna looks like she’s had enough.

Coming out of the first commercial break, we enter another commercial – this one is for the Giant, Cardiff Electric’s miracle machine which the main characters nearly destroyed the company to build. Recognize the “Jack” character in the commercial? I swear that’s Donavan Freberg, famously known as “the Encyclopedia Britannica guy.” He’s uncredited, but it sure looks like him and it’s a clever easter egg. The commercial introduces Gordon, who we learn has acted as President of Cardiff for the past year-and-a-half. Cardiff has been acquired by an overseas competitor. Gordon doesn’t know what the hell he’s going to do with himself, but at least he’s finally about to get paid for all the shit that Joe put him through.

Speaking of Joe, he’s returned from Boulder. We last saw him walking the Colorado countryside toward Fiske Observatory, in search of a mystery woman. I guessed he was looking for an astronomer – somebody with ideas about the future, someone on the cutting edge of things to come. But no, he just went to find a journalist writing about those things. This doesn’t make any sense at all, or at least it doesn’t ring true with Joe’s drive to be part of the next big thing. Conveniently, Joe and the journalist, Sara Wheeler (Aleksa Palladino), are living together and presumably in love. She’s also his live-in shrink, steering him away from the very dark hole where his soul ought to be. Or maybe together they’ve filled that hole and created something beautiful. It’s possible, and some part of Joe has been longing for that since his mother died. Ugh, this Freudian crap is boring, and so is Joe and Sara’s relationship.

Can we really be expected to believe that Joe is a changed man? That he’s satisfied lounging around the house in sweatpants and comfortable shoes? There was a great line in the last episode of S1 where Gordon asks Donna, “What is Joe’s Achilles’ heel?” Donna answers, “Casual wear.” Apparently Achilles has been slain. Or has he?

Poor Gordon is a junkie. Good ol’ California cornflakes – cocaine. Last year we had to suffer through Donna’s uninspired affair storyline. This season we get the addiction storyline. That’s the one-two punch of lazy writing. Apparently Gordon got into gutter glitter during all those late nights working to meet production deadlines. Now he’s rich, but he’s also starting over, with no clue what he’s going to do next. “Go back into the garage,” he tells Joe. That must be where he keeps his blow.

All the best scenes are reserved for Donna and Cameron. They finally have it out over the dysfunctional enterprise that is Mutiny. Cameron walks out. Donna follows her to an abandoned parking lot, where a minute later a suspicious-looking dude drives up with a van full of stolen IBM XTs. Cameron buys a pair of machines which turn out to be knock-offs. The dynamic duo track him down to a local dive, steal his keys, and then rob him of the real XTs. The action reminds me of that episode of “The A-Team” – the one where Face puts on a disguise and Murdoch talks in a funny voice and BA knocks out the bad guy to get his van back, and then Hannibal plucks the cigar out of his mouth long enough to say, “I love it when a plan comes together.” Remember that episode?

Meanwhile, it’s payday for Joe and Gordon. The engineer and the salesman share a cathartic moment, then Gordon gets his payout. Nathan Cardiff (Graham Beckel) tears up Joe’s check and throws it in his face. Joe nearly destroyed the company, and his power-plays cost dozens of people their jobs. Joe had it coming, but he gets the last word. “It’s good you’re getting out now. Something’s coming. It’s gonna be big, and it won’t include this place, and it certainly won’t include you.”

I watched the after-show commentary by the producers. One of them says Joe is alluding to the Internet, but that’s impossible. The Internet is still a pipe dream in a Berkeley computer lab. The closest things to it are the thousands of local BBS’s and the VAX systems of larger institutions. If Joe can see the Internet in the future, he’s going where only William Gibson dared to tread.

Donna and Cameron finally have an adult conversation about what it’s going to take to make Mutiny a success. Cameron just wants to write code, and Donna just wants to manage the network. They need someone to run the day-to-day operations, and luckily, that person’s prison sentence is about to expire. The next day Cameron goes to pick up everyone’s favorite S1 character, John Bosworth (Toby Huss). This invokes the old adage, “Be careful what you wish for.” Bos and Cameron developed a father-daughter type of bond, but how well can they work together as equals given her mistrust of authority and structure?

After the disappointment at Cardiff, Joe has his first true-to-character moment of the new season, spontaneously proposing to Sara. She says yes, but she is also worried that this could just be Joe relapsing into old, unhealthy behaviors. Of course she’s right, and at the end of the episode Joe is up late playing the old Atari 2600 tank game Combat against Cameron across the Mutiny network. This was the same game they played together in the opening flashback. They can’t see each other, so Cameron doesn’t know it’s Joe she’s playing. She probably should have figured it out though, because he’s using the world’s lamest handle, “user85.” By the by, it would have been impossible to play Combat over a 1985 BBS.

The obvious question is whether Joe is still in love with Cameron and he’s reflexively reaching out to her, or is there something more insidious blooming in his mind? Remember in the first season, Joe believed he created both Cameron and Gordon, and said as much. Is he stalking his prey, the hungry tiger hunting old territory?

Admittedly, I had high expectations, but this premiere episode was a B-minus at best. I can’t imagine viewers that are new to the show and who did not see the first season can catch up based on this episode. There’s too much history. Season One was brilliant, complex, multi-layered, and audacious. Writing a period drama is like walking through a field full of landmines. It only takes one misstep to blow everything up. Halt And Catch Fire had a couple close escapes last season, but it might have triggered one in the opening scene this year.

All we can do is watch the carnage unfold. I’m still confused about the meaning of the episode title. Beyond the obvious link to Joe and Sara meeting at Fiske, is SETI simply a nod to the future all the characters seek? Or is there more to it? My guess is this will come back and mature into the theme of the season. At least, I hope so. Like these characters, I am searching for something more.