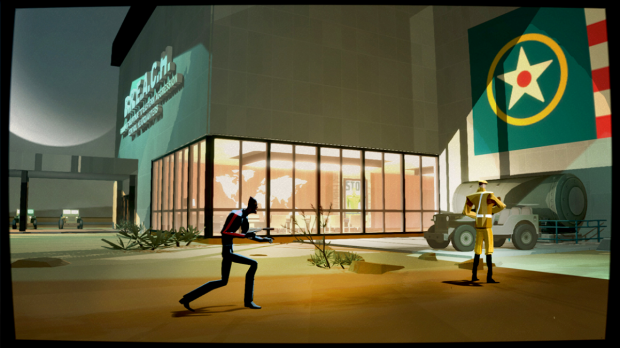 The following is an interview with Dynamighty’s David Nottingham…

Can we get a brief history on Dynamighty and how you guys came together?

DN: It started when John & I left LucasArts in 2010 because we wanted to set up a small independent game studio. We were joined by Mark Holmes from Pixar, and then also Mark Erman, who has more of a business background, but is also a total gamer.  It was important to us that we built a studio that could stay around for a long time and keep making more and more awesome games, so we felt like we needed those four elements (Design/Tech/Art/Biz) as a foundation.

Things really started in earnest though towards the end of 2012. That’s when we met with Sony.  Signing a publishing agreement with them for CounterSpy allowed us to hire an amazing team and slowly start to grow.  There was definitely a long period of just the four of us scrabbling away to make it happen, no funding, seeing our credit cards and savings travel in the wrong directions, but you have to make that sort of sacrifice if you want to pursue a dream. No one is going to just hand you your opportunity!

CounterSpy has some light hearted story elements in a very serious situation, such as the nations blowing up the moon instead of each other, what’s the inspiration behind that? Why not go the serious route?

DN: In terms of the Cold War subject matter, in some ways, I think humor is a good way to look at things that can otherwise be dark or depressing. You can shine a light on something by highlighting its absurdity and there are a lot of absurd ‘truth stranger than fiction’ stories from the Cold War era.

We actually started out with something conceptually that was quite dark in tone.  Mark and I both were attracted to some of the early spy genre such as Ipcress Files, which is a little more somber. I think to be honest, we were a little scared off by Austin Powers being such an over the top parody of the spy genre.  But we soon realized we were fighting what the game wanted to be, as well as our own sensibilities. We kind of like to crack jokes at the office, and Mark in particular has an acerbic wit.

Gameplay-wise, we also wanted to have a lot of humor in the game, so keeping things like ragdolls and flying hats in the game played a role. We actually spent a lot of time to get those right.  I think at the end of the day, there are so many ‘gritty’ games we wanted to create an experience that got back to that feeling of early games, with a game that is playful and FUN and doesn’t take itself too seriously.

What were some of the games you took inspiration from in designing CounterSpy?

DN: I’ve spoken about this before but for myself, two huge influences were games that shaped my childhood.  Impossible Mission, which was a classic side-scrolling game on C64 with amazing graphics for the time, and Flashback, which had such an immersive sense of a fully realized world.

What was the inspiration behind the art in CounterSpy? It seems to be one of the most popular things about the game.

DN: Mark Holmes & I both are huge fans of the visual style & aesthetics that were in vogue during the mid-50s.  There was that whole modernist movement seen in art, architecture, graphic design. All about clean lines and graphic simplicity that at the time felt very futuristic.  It was also a strong part of any espionage thriller from that era. Think of the classic Bond movie title openers, or the title designs of Saul Bass.

We started from a place of imagining CounterSpy as a long lost series from that era.  We even created fictional book covers for the imaginary book series, Mark created a series of foreign language movie posters, plus we just took delivery of a limited edition run of vinyl for the LP soundtrack. It’s designed to match the design of classic jazz LPs from that era right down to the pretentious liner notes!)

This reminds me, we should post some of this on our tumblr. Keep an eye on it http://dynamighty.tumblr.com/ we will keep posting bits and pieces there now the game is out!

How do you think being a part of Playstation’s special promotion helped CounterSpy?

DN: It’s obviously a huge honor to be a part of the PLAY program, especially as the other games (Rogue Legacy, The Swapper, Hohokum) are all games we are fans of.  I have been totally addicted to Rogue Legacy on my Vita and I love games like Hohokum that present a world, visuals, and music that all evoke a feeling that is very cohesive.

I think for gamers, the PLAY program offered a great deal with the PSN discount. Hopefully that helped more people who might have otherwise been on the fence give some of the digital games such as ours a try!

Why “Imperialist” and “Socialist” countries instead if the real names?

DN: We wanted to play up the fiction of the world and not have people get too hung up on real places. The point of the game is not to poke fun at specific places in the world, more the extreme ideologies when two forces take opposite sides of an issue.  In the world, you often see classic finger-pointing with those words used as insults (‘Socialist Menace’ or ‘Imperialist Threat’), so the taking those terms literally seemed like a way to highlight the absurdity a bit.

Was adding co-op ever an idea during development?

DN: Hmm, not really. I’m actually a huge fan of co-op games and local co-op in particular. It feels like there is somewhat of a resurgence in that in recent years which is great to see.  It IS, though, a LOT of work!

I think if you are going to create a co-op game you have to commit to that fully from day one and make it central to how awesome the game is. It’s a huge investment and—for a small team—it made sense for us to focus on the experience of the single player first and foremost. I don’t think it’s something we could have taken on with our first title.

We did implement the Rival Spy mode, which is not co-op but we thought it was a cool way to use the fact that your friends were playing the game as a way to offer a challenge for you to pursue that wasn’t just a high score table.

DN: Gah, I feel really lame here because we’ve been asked this before and I don’t really have any good anecdotes to share!

One thing I can say: I don’t know how many people think about this, but every studio starts with a first step, which is their first game.  Your first game is always a big undertaking because as a team, it’s the first time everyone is working together.  Our Producer has a metric he would remind us of, related to assessing risk on a project.  You ask these 5 questions:

Ideally you want as many yes answers as possible, but with your first game it’s almost always no to everything!  It’s crazy how much you are figuring out on that first go around.  Everything has to be done for the first time!  This is why you can understand why it’s so exciting to have our first game under our belt! :)

What’s next for Dynamighty?

DN: Right now, we are trying to keep pace with all the various fans playing the game, answering questions and responding to people. We are getting so many people saying nice things about the game we want them to know we are listening and also how much it means to us, after all the hard work, to see our game giving people so much joy.

We are also taking some time off to relax and recover!  Oh and I have a pretty large Steam backlog to look at….