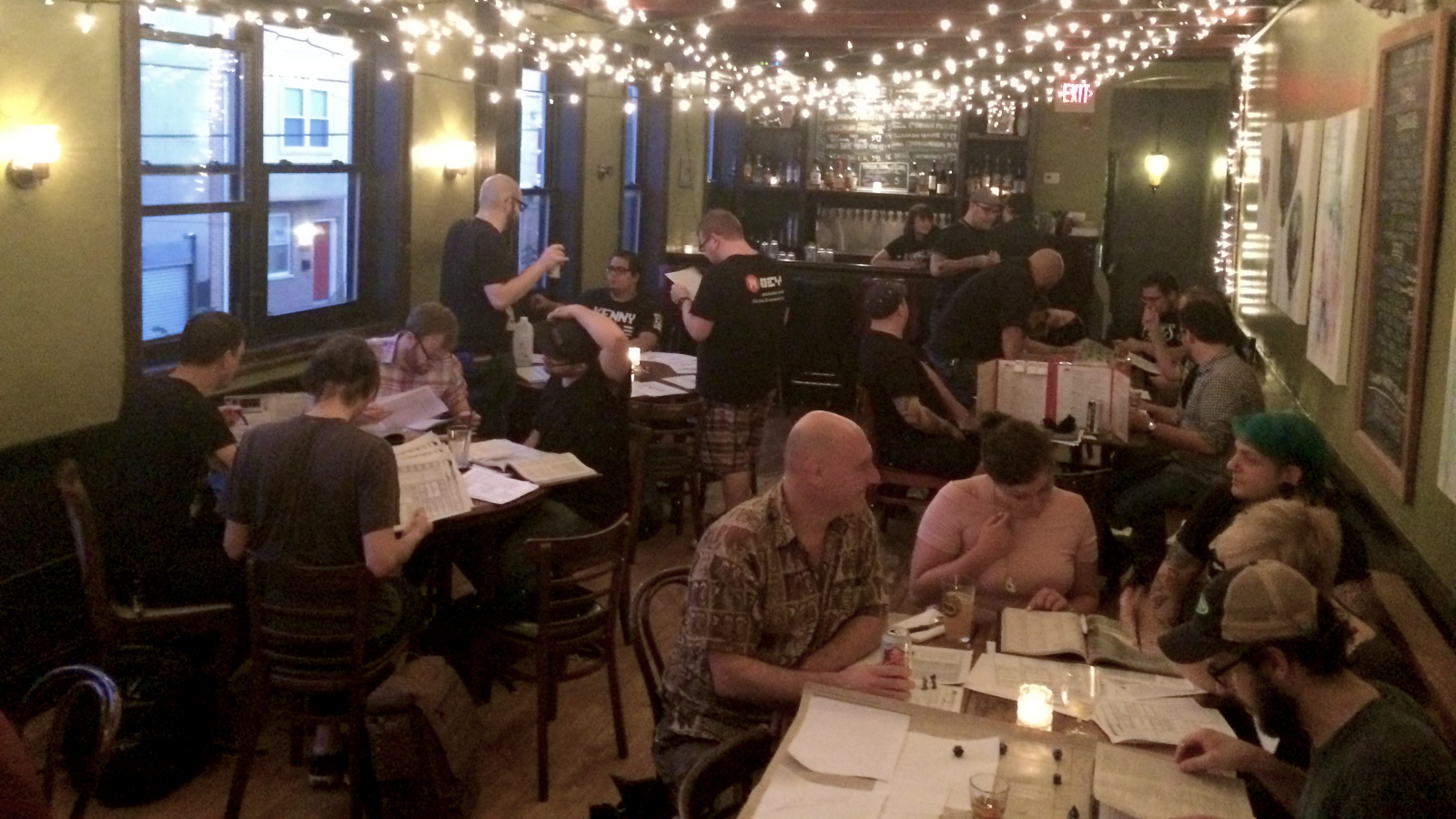 Drinks and Dragons: how one group is bringing roleplay to the community

As I sit in my oversized armchair finishing a beer and begin narrating a new adventure to a group of strangers, I know something special is happening. The din of voices around us is full of contentment, and this section of the bar that we took over is a sea of unfamiliar faces, all banded together out of a singular passion. This is Drinks and Dragons, a roleplaying group started by Don Caraco with a singular goal: to give everyone who wants to play the chance they have been looking for. “Everyone wants to play, but no one wants to DM…I make it a goal never to turn anyone away.”

Don has the look and bearing of a consummate wizard, his beard belying a welcoming and knowing set of eyes. As soon as you walk into the room he greets you and makes sure you are situated. He and a few friends began the group after realizing how many people there were in Philadelphia who wanted to play, but never got the chance to start.

Our good patron Mr. Caraco in his natural habitat, leading players through their courses and helping new ones learn the ropes

From my experience, this is definitely true. Philadelphia is something of a haven for nerds, though you would have never guessed it. Our gaming nights are packed to the gills and growing, and we even boast a fair collection of designers, as I discovered recently. While the popular culture of D&D currently exists mostly on the east coast, Drinks and Dragons hopes to highlight some of the local talent who are already hard at work.

The problem, as Don saw it, wasn’t a lack of interest or personnel, only a way to get started. “You know people [who want to play], you just don’t know you know them.” The hope was to pull people together and let things grow organically from there, but also to let the general populace know that D&D didn’t have to be hidden in basements and home games. How could he accomplish this? By bringing the game straight to them.

The idea started as Don and some friends who worked at American Sardine Bar were talking about how much they loved playing when they were younger. The thought occurred to them to use the upstairs room on an off night, but stopped there. It wasn’t until later, when a new manager okayed the idea, that they thought to pull more people into it. “We didn’t have much of a plan at first. It sort of happened on its own.”

American Sardine Bar is something of a personal favorite of mine, and for good reason. It’s an unassuming place on the corner of a residential area, but within you find an excellent beer selection and a varied and supremely satisfying menu. Upstairs there is a cozy space usually used for small band performances, but left mostly empty on Wednesday nights. The players found a space to host their event, and the bar found a new source of revenue.

“We tend to have 25 to 35 people, and that’s not counting GMs.” Every person has a few beers and some food while there for the three hours or so that Drinks and Dragons takes place, and the venue is all the happier for it. The group has been so successful that it has added another night at a separate bar, Black Cat Tavern. While the bar scene might keep out younger players, the goal truly was to get people involved. “A lot of social interactions here are wrapped around bars and food.” Therefore one of the best ways to get more people involved would be to bring the games where they are already inclined to go.

With a modest Facebook presence, Drinks and Dragons has grown mostly through word of mouth. The event has grown from its initial size, boasting a minimum of three tables a night. While the name is inspired by Dungeons and Dragons, the most identifiable RPG out there, the selection of titles offered are more than that. GMs have been running games big and small, from Monster Hearts and Call of Cthulhu, to one gentleman who consistently brings one page indie games to experiment with.

It’s not just the games that are varied, though. Inclusiveness is the sole driving force behind Drinks and Dragons. “I don’t care about race, gender, any of that. I just want people to play.” You might expect this event to look somewhat monochromatic, but that couldn’t be further from the truth. The table I ran my first night there, spinning the tale of Black Bay and its plight at the hand of a magical disease, my players came from different genders and ethnicities, and the game was better for it. It’s the passion of gamers that brings them together, and that passion makes this event work. “If you don’t know the rules, it doesn’t matter. There will be three people at the table who do. Nobody should feel intimidated.” In that, he is absolutely right. Everyone has been open and friendly, gladly guiding others through the rules and helping them play.

Don and the others responsible for Drinks and Dragons know that games are meant to be shared, and they are out to make certain that more people are able to share them. The people are already there, and Don sees it as his role to bring them together. “I want to stress to people that this is not professional. This is people getting together.”

“We’ve had solo groups start since this began, and I think that was always the goal.” In many ways there never was a real goal, but the group has been successful nonetheless. Don ultimately wants Drinks and Dragons to grow and live on its own, without him having to sustain it. Until that say happens, it is achieving something grand. He is already speaking with members about creating their own module, bringing together creative types from all strides to create the story, maps, and art. Drinks and Dragons is soon to be featured on Nerdarchy, a South Jersey group of streamers and content creators. “We know right now that if we made it a paid event we would be done, so we don’t want to do that. But at some point, maybe we will be able to raise some revenue for local charities.”

For now, I am more than happy to see that this exists. Every event brings in more players who are totally new to the hobby, but leave with some of the tools and contacts they need to go it their own. Drinks and Dragons meets every third Wednesday at American Sardine Bar and every first Thursday at Black Cat Tavern. The one year anniversary is coming up on, and it should be a big event. While Don doesn’t want to make any promises for something that is ad hoc as it is, he hopes to make it a special night.

“This is our chance to take back something that was taken away from us. As kids we were told not to use our imaginations. Imagination is more important for adults than kids.” When my first night was over, the plot derailed from a tense cultural thriller to a corrupt election game, I couldn’t have been happier. Everywhere around me, there was laughter, and gaming, and the light of something special in everyone’s eyes. I heard them talking about new characters they wanted to run and new stories they wanted to tell, and I knew that it was only the start of something beautiful for every person there.

Edit: A previous version of this article erroneously stated that American Sardine Bar and Black Cat Tavern shared ownership. They are separate establishments.

Drinks and Dragons: how one group is bringing roleplay to the community

John Farrell is a legal aid attorney specializing in domestic violence, living in West Chester Pennsylvania. You can listen to him travel the weird west as Carrie A. Nation in the Joker's Wild podcast at: https://jokerswildpodcast.weebly.com/
Related Articles: Culture, Dungeons and Dragons, Tabletop
Share
Tweet
Share
Submit