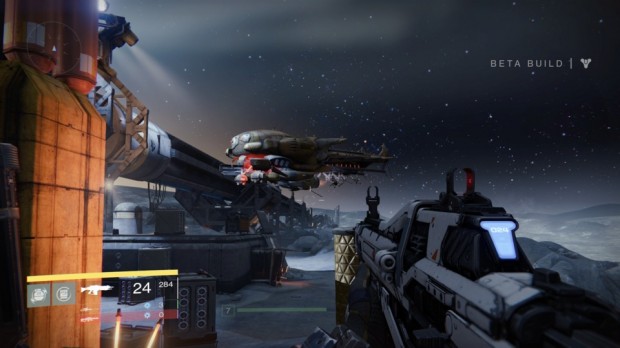 The narrative element of video games has always been one of great importance. Whether it was in scrolling 16-bit text, or in full, slightly overlong cutscenes, wonderful tales have been woven since the beginning of this love we call video games. You can look no further for proof of that than the 2001 Bungie hit Halo: Combat Evolved. The original Halo told the tale of Master Chief, but more importantly shined light on a beautiful universe sculpted by a variety of writers.

During the development of Bungie’s upcoming first person shooter, Destiny, they have put very little focus on the story. After playing some the beta, it became apparent that the hook of Destiny is its combat. Despite landing the very talented Emmy winning Peter Dinklage, you can find very little to no unnecessary semblance of a decent narrative. The beta (and presumably, the game) begins with a decent cutscene giving you the overview of the world you are living in, plus some reasoning as to your character’s goals. Once you get past that, however, the game resorts to simple MMO-esque storytelling that involves reading a large block of text to figure out what you are supposed to do next.

Even once you do consume that block, it is simple, monetary stuff that brings about no emotion and does not dig deeper into a rich fiction that we know Bungie is so good at creating. Not only is there a serious lack of exposition, you only run into one recurring environment, leading you to wonder the size of the game world. Now, do not get me wrong, I completely understand this is a beta and it does not reflect the whole experience. But while this is not the full game, it is the first five or six hours, and with that little explanation of an arch at the beginning, the rest may be lacking just as much.

MMO’s have consistently been known to lack a cohesive or substantive story, with Destiny attempting to be similar to an MMORPG, but with only a semi-Massive Multiplaying universe. iI there is one thing that has become apparent over the past few years, MMORPG’s are dying very quickly. Most recently, WIldstar released to a very positive reception. Despite that reception, people were still questioning how long it was until the game went into the free-to-play model. The same can be said in regards to Bioware’s Star Wars: The Old Republic, the most anticipated MMO released since World of Warcraft took the world by storm. The Old Republic went free-to-play within a year of its release.

While the lack of success for these games can be related to multiple aspects, one constant is none of the recent MMO’s featured a captivating narrative. A majority of your time spent in these games has your character wandering around, talking to a variety folks, fetching whatever goodie they need, and then repeating the process at the next floating exclamation point.. If you were to create smaller cut scenes for certain larger characters, it would drive a connection between you and the characters. More of a connection means more time digging into the story, and ultimately more time with the keyboard under your fingers.

Bungie’s Halo series was arguably the most successful franchise of the last decade. A large aspect of that success is what Bungie is counting on to drive Destiny’s success, the excellent combat. But you cannot have excellent combat with a thin story and expect it to become a hit, mainly because the name of the game is not Call of Duty. You also need a driving narrative to compliment that, something Halo did flawlessly. It introduced a seemingly endless universe packed with characters and tales just waiting to be explored. This is all the more evident by Bungie’s off-shoot of the main Halo story, Halo Reach. Reach built upon the aforementioned universe and managed to bring about emotions and heart that not even the original storyline produced.

Now with all that prior experience in creating an excellent universe, why has Bungie not put more of an emphasis on the universe they hope to build in Destiny? The answer eludes us all, but hopefully it is in favor of showing off excellent gameplay, and not because that interesting universe does not actually exist in this Bungie adventure. As the September 9th release date of Destiny approaches, more questions begin to swirl in regards to what kind of impact the title will have on the video game landscape.

Will those blocks of quest-related text be enough to start a universe we can all fall in love with, similar to what happened with World of Warcraft? Will Destiny go the Halo route and have cut scenes divulging the necessary story information? Or, worst case scenario, will Destiny rely fully on its combat and set the story completely aside?

Destiny will release on Xbox 360, Xbox One, Playstation 3, and Playstation 4 on September 9th.