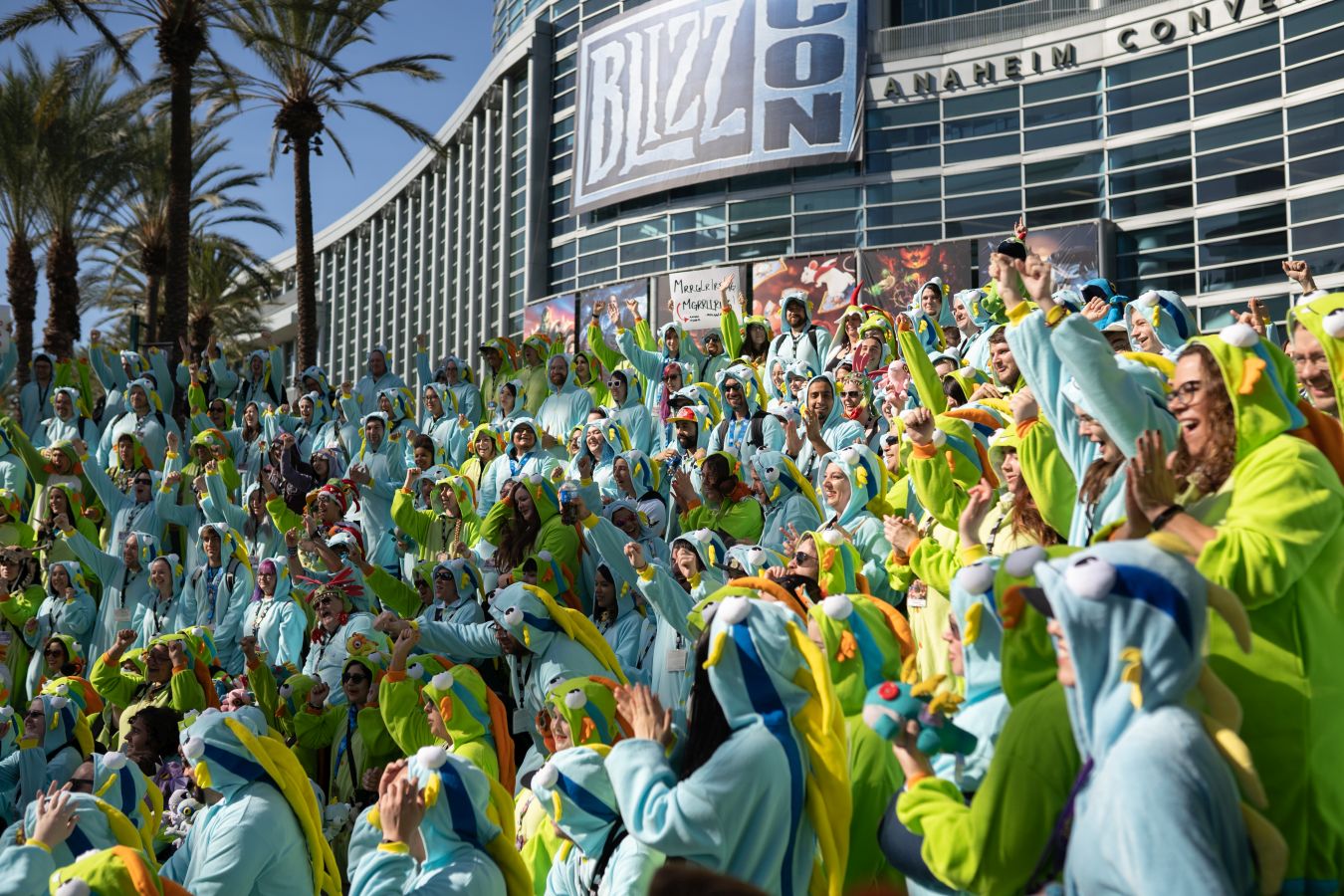 BlizzCon 2018 may not have had any huge announcements this year, but Blizzard still had some pretty exciting things to talk about. While I will only give my personal thoughts on the World of Warcraft and Overwatch announcements, this article will go over all of the things unveiled at the con this year.

Experience this beloved real-time strategy game like never before. All new art and animations, 62 single-player missions, a refreshed user interface, an overhauled World Editor, and full Battle.net integration await in this timeless classic.

Before the BlizzCon Opening Ceremony, Steve Cotton announced that players will be able to acquire the base Destiny 2 game on Battle . net for free, as long as you claim it before November 18th.

Rastakhan’s Rumble™ – A new Hearthstone expansion, launching December 4, pits players against the finest troll gladiators Azeroth can muster. Step into Gurubashi Arena and fight for glory with 135 brutal new cards, including Wild Gods that have manifested in the form of nine new Legendary Loa minions!

Rumble Run – In the single-player mode for Rastakhan’s Rumble, Rumble Run, compete for glory before cheering crowds in a no-holds-barred smackdown in the Gurubashi Arena! Players will choose a troll champion and climb the ranks in this gladiatorial contest to be crowned champion. Rumble Run is free for all players; no pre-built decks are required for entry.

Eager combatants can pre-purchase Rastakhan’s Rumble card packs via two bundles: a 17-pack Challenger’s Bundle that includes the Ready to Rumble! card back, and the 50-pack Rumble Bundle that includes the King Rastakhan Shaman Hero and the Ready to Rumble! card back. These one-time-only bundles are available on any platform for $19.99 and $49.99 USD, respectively (players can purchase each bundle only once per account).

Heroes of the Storm:

New Hero: Orphea – The first ever Nexus-born Hero—Orphea, heir of Raven Court and daughter of the nefarious Raven Lord—is an approachable ranged Assassin with a high skill cap who rewards opportunistic plays. BlizzCon attendees and Virtual Ticket holders will receive Orphea for free when she makes her way to the Nexus in Blizzard’s fast-paced MOBA later this month.

Match Quality Updates and Community Content – The 2019 Gameplay Update is coming to Heroes of the Storm with the goal of making games feel closer and more competitive, including exciting new changes to the experience system and matchmaking. The Heroes team is also paying homage to some of the community’s most hotly requested items by adding Skins like Janitor Leoric, the Kevin Johnson aka Cloaken announcer, and more!

Zeratul – Prepare to strike from the shadows with the next Commander for StarCraft II’s popular Co-Op mode: Zeratul, the renowned psionic assassin. By collecting powerful artifacts, Zeratul unlocks powerful new capabilities and the ability to customize his global top bar abilities.

McCree’s animated short “Reunion” debuted at BlizzCon. You’ll see some backstory on him, as well as some interaction with Ashe.

Lúcio-Oh’s are here! With the help of Kellogg’s, the popular Lúcio in-game spray has become a reality. The cereal will be available for purchase starting in late December at various retailers in the United States.

WoW Classic – WoW classic will launch Summer 2019, and will be included with an active World of Warcraft subscription. BlizzCon ticket and virtual ticket holders were able to play a demo.

Lost Honor – Showcased above, this new CGI shows what happens after Saurfang is “captured” by the Alliance.

Adopt Whomper and support Code.org – A new in-game pet and plushie is now available for purchase, with proceeds going to benefit Code.org—a nonprofit dedicated to expanding computer science education in schools and increasing participation by women and minorities. Learn more about Whomper, the playful baby yeti.

As mentioned at the beginning of the article, I will only comment on the Blizzard games I am actively playing. There was a lot of negative feedback coming from this years BlizzCon and I have to say it was really disheartening. They openly said that there would be no major Diablo 4 announcement this year, and the fact that people booed when Diablo Immortal was unveiled was so hateful and immature.

Mobile gaming may not be for everyone, but there is money to be made there, and it is a huge part of gaming in this age of technology. Blizzard would be stupid to not invest in that. You already play Hearthstone on your phones and tablets, why not add more? Having more choices is never a bad thing.

It was awkward to watch some of the panels this year. I miss Chris Metzen and how he could get the crowd pumped up over the smallest thing. But alas Blizzard now has a new CEO, J Allen Brack, and watching him unveil the WoW highlights just felt…blah. Nobody cared, nobody was clapping. There was no pulse, no excitement. I hope they can find their footing with this new shift in the company and continue producing quality content for all of their games.

I have been playing World of Warcraft since day one of launch. At the start, I was leading a hardcore raid team, and we cleared all of classic. It was fun back then, and I have fond memories of it, but I have no interest in WoW Classic. I recently went back to playing EverQuest on a progression server with a few friends. It was fun for a little while, but then you start missing all the quality of life things that you take for granted. So I will definitely skip out on WoW Classic, and just remember things with fond nostalgia instead.

World of Warcraft: Tides of Vengeance.

I am very excited about the new content coming with Tides of Vengeance, which will launch on December 11th. On the top of my list is the Blood Elf Heritage Armor! All of my Horde characters are Blood Elves and already exalted, so I can’t wait to represent!

In my review of Battle For Azeroth I mentioned that I have fully enjoyed the raid bosses in Uldir, and I am very pumped for the new raid, Battle of Dazar’Alor. I’ll be streaming our adventures every Monday and Wednesday at 9:30 EST on the Gaming Trend YouTube channel, and will have a review out on the patch shortly after launch.

It will be nice to have a new Warfront with Battle for Darkshore. I am curious to see where the storyline goes with Malfurion and Tyrande!

But I am most excited for what they teased us with for patch 8.2: Rise of Azshara! We’ll get flying (hurray!), Heroic Warfronts, new Island Expeditions, Gnome and Tauren Heritage Armor, two new zones: Nazjatar and Mechagon, the new raid Azshara’s Eternal Palace, and a new “megadungeon” Mechagon.

I was very pleased with the new Overwatch character announcement, and can’t wait to play her! The McCree animated short was very well done, and I look forward to learning more about both Ashe and McCree. I didn’t watch all of the Overwatch panels, so I can’t really comment on much, but it didn’t seem like was a whole lot of stuff to talk about. I play Overwatch several nights a week, and always love getting new characters and content.

As far as the Diablo Immortal announcement goes, I didn’t jump into the franchise until D3, and it isn’t something I play regularly. However, because I do play a lot of mobile gaming I will most likely pick it up when it releases. Again, I can’t grasp why there was so much hostility towards this announcement.

In my honest opinion, BlizzCon 2018 was not overly exciting this year, but I was still thankful to get the opportunity to watch it. I always enjoy watching the panels where they talk about how they create characters, voices, and scenes. I appreciate the hard work Blizzard puts into making these games we love so much. The pettiness people showed this year was an embarrassment to the gaming community as a whole, and was honestly disgusting. It’s hard to make not only a great video game, but also create the living, breathing worlds that they exist in. Blizzard is one of the best in the industry at doing both, so give them some credit.

As of now, I plan to attend BlizzCon 2019 in person with some of my Gaming Trend colleagues and a group of my World of Warcraft guildmates. I have met so many wonderful friends that I have kept over the years, all thanks to the games that Blizzard has created, and look forward to going to my first ever BlizzCon. Now I just have to figure out what I want to cosplay as!

Did you attend BlizzCon 2018 this year? If so, we’d love to hear your thoughts below in the comments!

Holly Hudspeth is a best-selling author living in Fort Worth, Texas. She has six published novels to date; The Skyy Huntington Series, which is an epic dark fantasy adventure, and One Small Detail, a stand-alone medieval fantasy. Holly also enjoys writing fan fiction based on her avatars from games such as EverQuest, Elder Scrolls Online, and World of Warcraft. Her first major purchase at the established age of nine was the NES, and she has been gaming ever since. She enjoys fantasy games, city builders, RPGs, MMOs, SMITE, and The Sims franchise. Most nights she is in SMITE with her husband and friends, or playing ESO. When she isn't gaming, she is probably either at Disney or planning her next trip there.
Related Articles: Blizzcon, Diablo III, Diablo Immortal, Hearthstone, Heroes of the Storm, Overwatch, StarCraft II, World of Warcraft
Share
Tweet
Share
Submit