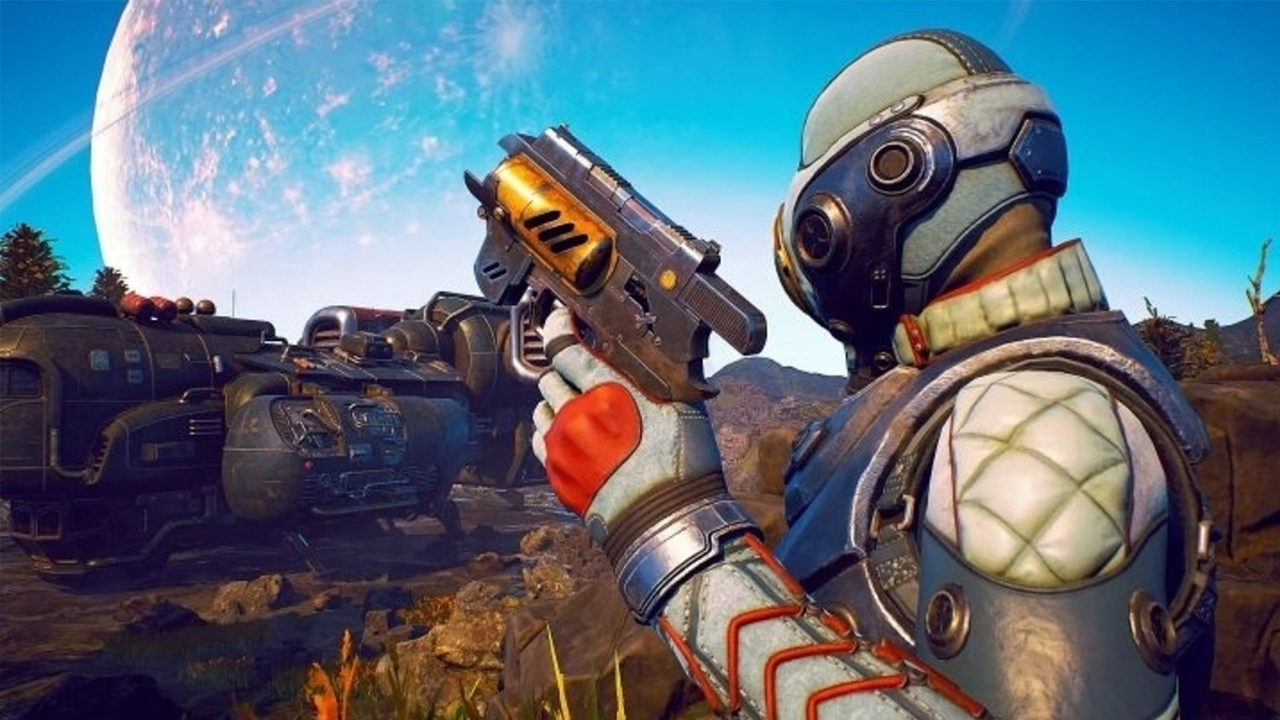 As a massive fan of Fallout: New Vegas, I knew that I’d love The Outer Worlds. Knowing that I’d immediately want to mod out things like weight restrictions, and the desire to play at whatever resolution I want, and with all of the frames I could muster, I knew I’d have to play it on PC. As usual, I won’t be rehashing our review (though I have to admit, my experience differs — I’m enjoying the game quite a bit) instead focusing on the quality of the port on the PC.

Before we dig too far into it, here’s my system specs:

Loading the game and digging into the settings, there’s a bit of baffling bundling going on. Inside the options lies “Graphics Quality” which are your presets from Low to Ultra, with Screen Effects, View Distance, Shadows, Textures, and Visual Effects as additional sliders. If those sound very vague, you’re where I am. I kept looking for an “Advanced” button to tinker under the hood, but there just isn’t one. Let’s dig into the specifics of what’s available without doing surgery on .ini files.

Beyond these basic options, there is also a framerate limit option (which you can thankfully turn off), you can enable VSync, as well as adjust 3D Resolution (3D Resolution allows the game to render at a lower fidelity from 22% to 100% and then scale it to the screen). If you are susceptible to motion sickness there is also a field of view slider. which I’m told can help. With those simple options out of the way, let’s look at this bizarre bundle of options.

The Screen Effects option lists that it affects “blood splatter, chromatic aberration, light flares “and more”. (I have no idea what “and more” means in this context, so don’t ask) Shadows, obviously, controls how detailed shadows appear in the environment, just like View Distance controls (stay with me, now…) how far you can view objects in the distance. Textures is reflective of the quality of surface textures, but appears to be another black hole. Visual Effects is the last category and it encompasses the rest of the visual effects, such as “Explosions, Bullets, Lasers, etc.” (yes, it says etc.). If you are a PC gamer, and you’ve spent upwards of a grand on a shiny 2080TI, you probably want a little more than “etc.” or “and more” — you need to be able to adjust every little knob and slider until you have the visual feast you deserve. Before we head too far down that road though, let’s talk about the quality and performance of the defaults, starting with this hour-long video at Ultra settings running at 4K.

As you can see, the game is absolutely stunning. It comes alive with colors that help sell the alien nature of the worlds, and the familiar glow of neon once you reach places like Groundbreaker Station. Unlike many other open worlds that rely on being “gritty” and “grimy”, which usually translates to a staggering array of brown and green colors everywhere you look, The Outer Worlds embraces a far brighter pallet and the game is better for it. The game is packed to bursting with details, and there is little comparison between the game running on Ultra and the console versions. In terms of visual quality, there’s no doubt that the PC version (as is often the case) is what the developers intended.

While the game is indeed gorgeous, I did come away with plenty of questions. Where are the anisotropic filter settings? Can I adjust depth of field? How do I turn off chromatic aberration (chromatic aberration is best described as a “fraying” of red, green, blue colors to give it a more “cinematic” feel)? Of the 21 unofficial mods currently available for the game, it’s not a surprise that 14 of them are to make adjustments to the look of the game. When you don’t give people the option in the options menu, they’ll make their own. All of that aside, let’s take a look at performance.

While the game will technically run on the minimum specs (and we’ll talk about that as I have something close), to run the game at 60fps, the developers put out the following as a recommendation:

I tested The Outer Worlds on three wildly different PCs — a laptop with the equivalent of a GeForce 770, a desktop with a 1080Ti, and my gaming rig with a 2080Ti and at both 1080p and 4K resolutions.

The laptop, unsurprisingly, detected most of the settings at Medium or High, and defaulted to 1080p resolution. The game is surprisingly beautiful and imminently playable at that resolution, with the framerate hitting around 45fps the vast majority of the time, but never dipping below 40. Any attempts to push that to 4K would have been futile, so let’s just move on to the 1080Ti. The desktop PC I use in my office is mostly used for rendering videos and work, but with a 1080Ti it can deliver frames just fine. In fact, with a 1080Ti, I was able to run the game at Ultra settings across the board at 1080p and saw my framerate hovering around 104fps, with very rare occasions where it’d hit the mid 90s. Pushing my resolution to 1440p saw that framerate drop to a highly respectable 75fps. The trip to 4K would, as you might expect from the 1080Ti, be a rough one. Dropping all the way down to 37fps on average, the game certainly showed off its 4K visuals, but if 4K/60 was your aim, a 1080Ti just isn’t going to get it done.

The 2080Ti is arguably built for 4K. It laughs at 1080p putting up nearly 130fps on average, doesn’t break a sweat at 1440p, delivering a whopping 97fps, and very nearly delivers on its promise of 4K/60 with Ultra settings delivering 56fps as an average, with indoors pushing closer to 70. There’s no doubt that The Outer Worlds is pushing the Unreal Engine 4 and your hardware powering it equally hard. It’s likely a few patches and driver updates will squeeze my 2080Ti until it’s able to hit that 4K/60 panacea with little trouble.

Beyond the visuals, it’s worth talking about a few other elements of the game. I’m a dork, so I have tiered storage in my gaming desktop. This means I have a large 7200RPM drive that I use for games that aren’t loading intensive, an SSD for things that are a little more demanding, and a Gen 3 M.2 NVMe SSD for games that tax my system to the limit. Open worlds frequently have an issue with texture pop-in as they simply cannot stream and process textures from the drive fast enough. For kicks and giggles, I put The Outer Worlds on my mechanical drive. Please, spare yourself the pain and do not do this. The texture pop-in was fairly intrusive, and load times were certainly noticeable. Moving the game to an SSD was a marked improvement, removing much of the load times, though texture pop was still apparent, albeit greatly reduced. While I’d love to say that moving the game to my M.2 drive eliminated texture pop-in completely, it doesn’t. That said, it’s almost nearly gone, and the load times are blisteringly fast.

Suffice it to say, if you enjoyed the open world games that Obsidian has built for us in the past, you’ll enjoy The Outer Worlds. It’s literally the videogame equivalent of “comfort food” — it’s not bringing much new to the table, but it’s a good warm bowl of shells and cheese we’ve come to expect. Now, let’s just figure out what .ini files to tweak to make this puppy run like a top.

Ron Burke is the Editor in Chief for Gaming Trend. Currently living in Fort Worth, Texas, Ron is an old-school gamer who enjoys CRPGs, action/adventure, platformers, music games, and has recently gotten into tabletop gaming. Ron is also a fourth degree black belt, with a Master's rank in Matsumura Seito Shōrin-ryū, Moo Duk Kwan Tang Soo Do, Universal Tang Soo Do Alliance, and International Tang Soo Do Federation. He also holds ranks in several other styles in his search to be a well-rounded fighter. Ron has been married to Gaming Trend Editor, Laura Burke, for 21 years. They have three dogs - Pazuzu (Irish Terrier), Atë, and Calliope (both Australian Kelpie/Pit Bull mixes).
Related Articles: Let's Play, The Outer Worlds
Share
Tweet
Share
Submit