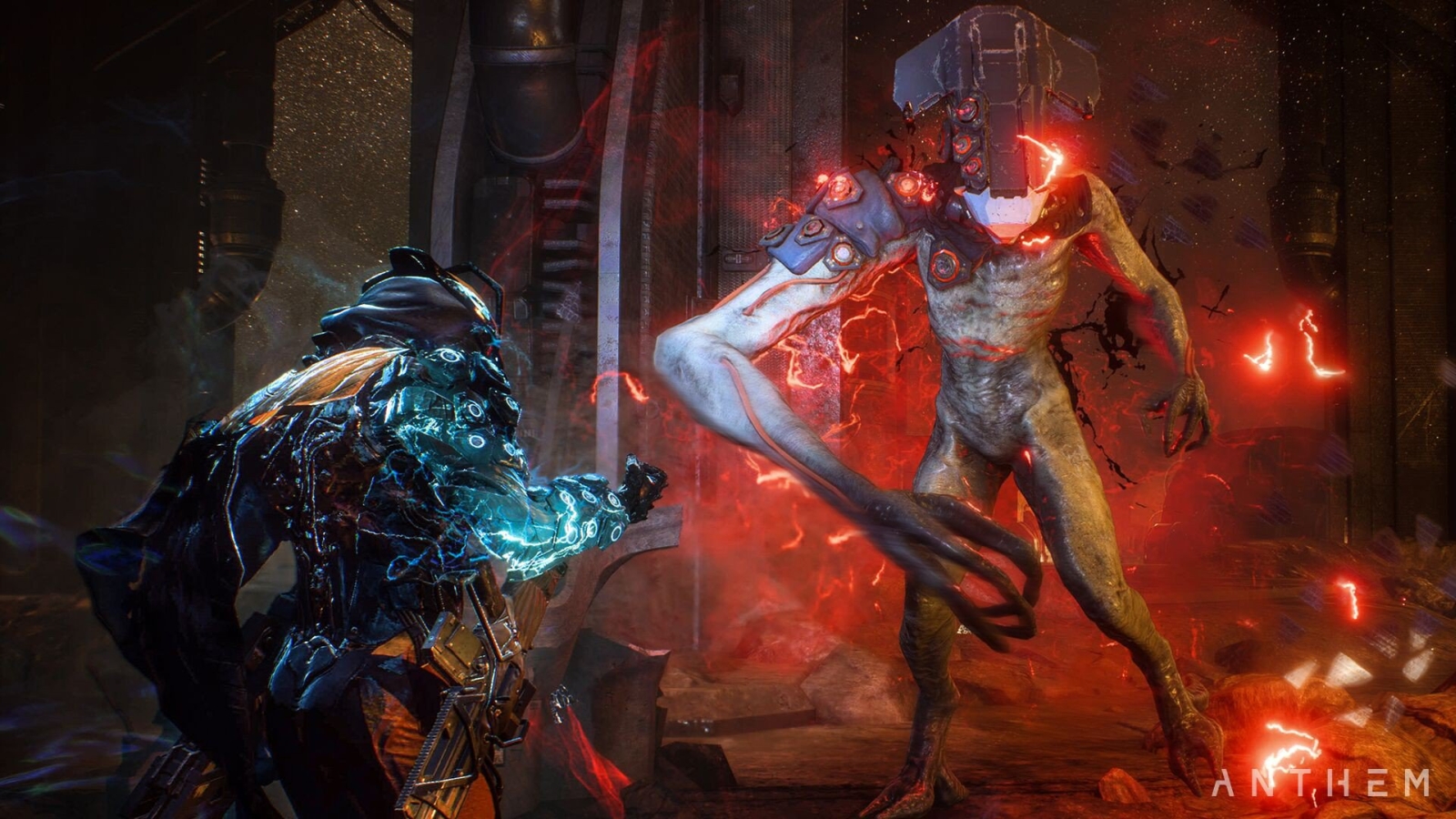 As I mentioned in my review for Anthem, the game-as-a-service nature makes it a moving target. We are now a month after launch, so it is reasonable to take a look at the current state of the game.

The last 30 days have seen several patches, including an extensive Day 1 patch that contained over 300 fixes to the game. Much of the pre-launch stability and “95% loading loop” issues were resolved, and patch 1.02 brought with it a better loot drop experience. Unfortunately, this was done in error, and loot was restored to a slow trickle in a rapidly-deployed patch just days later. Subsequent patches gave players another bite at the loot apple with better drop rates, but again this was a bug that was quickly reverted, though Grandmaster 2 and 3 loot was increased by a marginal amount. Bioware’s statement that they “aren’t happy with loot either” cited their intention to make changes over “the next couple of months” didn’t resonate with fans, prompting a proposed log-out protest from 3-11-19 to 3-15-19, hoping to push Bioware to restore the previously-experienced “lootshower”. Amidst these patches, PlayStation 4 players began to experience database corrupting lockups on their consoles, requiring an emergency patch to resolve. Freeplay is now bugged for many players, causing frequent drops and disconnects. For every patch that resolves issues, new and often more serious ones are introduced. In short, it’s been a very rough month since launch, and to read the comments on the Internet, you’d have to think it’s all about loot.

While I stand by my assertion that Anthem is a “work in progress”, the approach Bioware has taken seems to be alienating their own community. Certainly, loot is a concern, but there are quite a few examples of more pressing issues. The UI continues to be a black hole, with little to no explanation as to what effect gear stats have to do with what’s happening on screen. Fans have built excellent examples of how stats and post-mission wrap ups could be displayed, but Bioware has yet to take a single step on this journey. Similarly, my complaints around mission variety are unchanged.

Thankfully, Bioware’s engagement level with the community (minus an accidental omission perceived as “stealth patches” that were later added to the recent patch notes) has remained strong. Routinely they engage on Reddit and Twitter, and have not shied away from the current issues with the game. It’s still promising that they remain engaged with the community, despite a more recent turn towards frustration by that same fanbase.

One month into Anthem’s live service, Bioware faces its largest opposition in other recently-released loot-shooters, and they are still very much a step behind. This month’s slow roll towards stability has been at the cost of both content and cosmetics. The team’s roadmap for Anthem included two world events called There Be Giants and Scar Infestation, but despite over 100 hours of gameplay, none of the fireteam that reviewed the game ever encountered a named Titan, nor got a chance at the Scar Infestation content. The poor server-side hitscan mechanics of Titan fire would have just made it frustrating anyway, I suppose, but it’d have been nice to see something different. Similarly, despite showing a vast array of awesome Javelin armor sets and emotes in pre-launch videos, players are given just a pair of them each week. If Overwatch and other games with cosmetics should have taught the Bioware team anything, it’s that you should swing the gate for players to give you money very, very wide.

My biggest complaint with Anthem a month after launch is that there has been no progress, nor announcement of intention to correct the lack of mission variety. Missions continue to follow the same pattern with little variance. You’ll set out on a mission, kill enemies in the mission zone to retrieve an object of some sort, defend a signal emitter, kill another wave of enemies and possibly a boss, and then zip back to base to do it all again. One of the powers inherent in a game-as-service title is that these “rules” can be changed on the fly, but a month in, we’ve seen no progress in this area. Perhaps we’ll have to wait for the first content push to realize this, but it is causing players to become bored with the otherwise fantastic combat aspects of the game.

Returning to the loot problem that seems to fuel so much fan rage at this point, I believe Bioware can assuage much of the angst with a simple statement. It is very likely that they don’t want players to have so much of the endgame loot that new content they introduce becomes trivial and impossible to balance. Once that horse has left the barn, it becomes a war of escalation until the game is unwieldy. The easy answer is to make enemies even more “spongy” than they are today, but the right answer might be to just increase the amount and variety of enemies on higher difficulty. Either way, it is creating a problem for the Bioware team, and fans won’t wait long for forward progress.

I still stand by my review (despite people telling me to “kill myself” and that I’m a “paid shill”) as it focuses on the potential of Anthem. Much of what ails the game can be fixed with content and quality of life improvements. While frequent loading screens will likely always be a part of the game thanks to the Frostbite 3 engine, there’s a lot to be said about keeping Javelins in the field with their friends. It is still where Anthem shines the most.

Stay tuned for our continued coverage of Anthem — I’ll see you in another month for a fresh update, Freelancer.

UPDATE: Before I clicked publish on this article, patch 1.04 went in, breaking loot yet again, causing disappearing enemies, and further exacerbating fan angst. It also removes loading to get into the Forge, and introduces repeatable story missions and cosmetic loot via a new mechanic called “Elysian Chests”. These chests contain vinyls as well as victory and arrival emotes, for a total of 67 vanity goodies, but does not contain armor as fans had hopes. A hotpatch to fix some of the loot issues (e.g. players being able to pick up the loot of others, better chances of Masterworks and Legendary items dropping at higher difficulty levels, etc.) has gone in since the March 26th patch, but players have continued to respond in a fairly negative fashion to the shallow drop rate, repeating the cycle we’ve seen play out over the last month. We’ll keep you posted as Anthem’s live service continues to evolve, but I’ll simply say that were I to score Anthem today, the score would be in the 60% range (and dropping) due to extremely poor QA and a completely tone deaf disconnect between what Bioware wants, and what their paying fans are asking for.

Ron Burke is the Editor in Chief for Gaming Trend. Currently living in Fort Worth, Texas, Ron is an old-school gamer who enjoys CRPGs, action/adventure, platformers, music games, and has recently gotten into tabletop gaming. Ron is also a fourth degree black belt, with a Master's rank in Matsumura Seito Shōrin-ryū, Moo Duk Kwan Tang Soo Do, Universal Tang Soo Do Alliance, and International Tang Soo Do Federation. He also holds ranks in several other styles in his search to be a well-rounded fighter. Ron has been married to Gaming Trend Editor, Laura Burke, for 21 years. They have three dogs - Pazuzu (Irish Terrier), Atë, and Calliope (both Australian Kelpie/Pit Bull mixes).
Related Articles: Anthem
Share
Tweet
Share
Submit