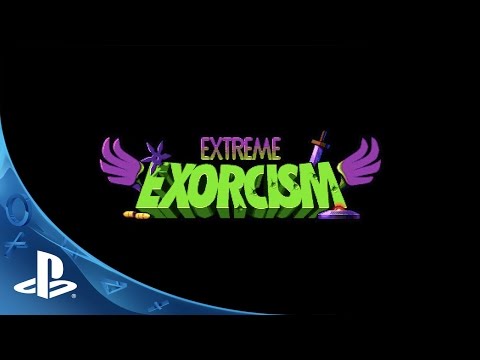 Ever wanted to try your hand at an 8-bit ghost busting semi-roguelike platformer?  Probably not as there hasn’t been one.  Well, you can’t say that anymore.   The team at Golden Ruby Games has built said bizarre platformer.  You take on the role of Mae Barrons, an Extreme Exorcist who, with her supernatural powers can bust the ghost inhabiting a haunted house.   Here’s the twist though…each new round, the ghosts will…well, ghost the actions of your previous round, so you are essentially competing against yourself!

Eric Van Allen took a swing at it during early beta and had this to say in his hands-on preview when he had a chance to speak with Mike Christatos, president of Golden Ruby Games about Extreme Exorcism’s multiplayer:

“We’ve always been fans of games like Mario Kart, because they’re not only challenging but lots of fun and great to play with friends,” said Christatos. “In their essence, they really boil a game down to its core fundamentals – the ‘fun’ part being the most important. We like to push that boundary of acceptable difficulty, trying to challenge players in new and interesting ways. “

Check out this video to whet your appetite.

We have codes for Xbox One, PlayStation 3, PlayStation 4, Wii U, and Steam, and you can win one for yourself!   Flip left and right for the platforms.  Check out our contest below and score one just in time for the weekend.  Good luck, and thanks again to Golden Ruby Games!

Win a copy of Extreme Exorcism from Gaming Trend