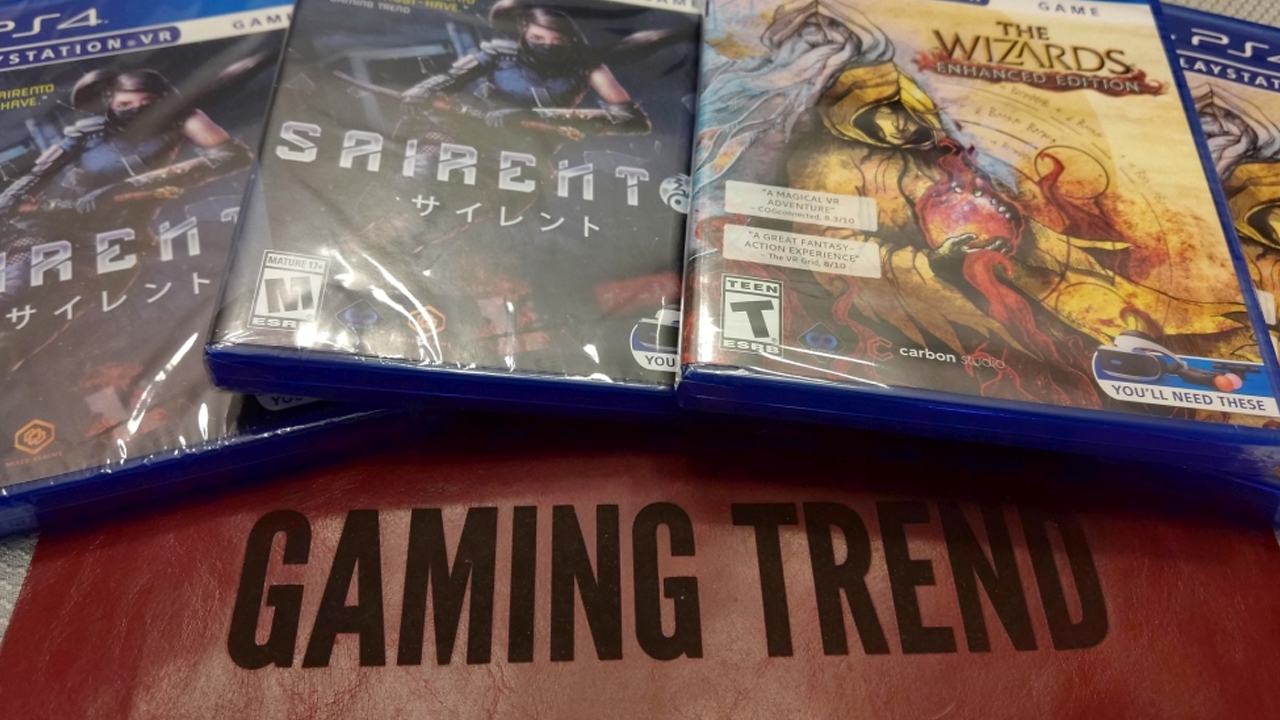 Heads up, readers.  We’ve got two copies of The Wizards and two copies of Sairento for PSVR.  Those games came out TODAY, and we are excited to share them with you.  These physical copies will be shipped out Saturday morning to the winners, and we can’t wait to hear what you think of them.  If you’d like to hear what I thought, here’s a little bit about Sairento (take a close look at the cover…yea, that’s us, but here’s our review)

There are players that have spent literally hundreds of hours perfecting their movement in the game that can demonstrate this easier than I can, but suffice it to say that VR is built for the kind of action Sairento has on display. I’ve jumped over an enemy, bounced off a wall, shot an arrow in slow motion, bounced off the ceiling, and while upside down simultaneously shot three more arrows into the heads of incoming foes. Before I hit the ground, I drew my akimbo swords, slid on my knees through the crowd, and eviscerated a few more. What’s more, this is just a normal level in Sairento – the action is always hectic, and you always feel like the biggest badass in the room. If VR is escapism, Sairento is the among the best at it.

Ok, cool.  What about The Wizards? (our review)

In the beginning, your magic is limited, and you are only able to cast a handful of spells. Pulling the trigger to close your fist, creating arcs of power which begin to surround your hand. Flipping your hand over causes your palm to fill with fire, turning it into a throwable fireball. Closing both fists and criss-crossing them brings a Frost Bow into existence, firing a handful of arrows made of ice pulled from a back quiver. Coupled with the fireball is a magical Arcane Shield capable of deflecting enemy attacks and projectiles. As you complete missions, your power will grow, granting a two-handed lightning spell, and a large fire orb that is thrown like an overhand beach ball, exploding on contact. There is also an arcane shard spell that is cast by, and I can’t stress this enough, essentially doing your best Marvel’s Dr. Strange impression, making opposing half circles with your hands. Lobbing fireballs, shooting lightning from your fingertips, and unleashing magical shards against an ever-advancing horde never stops being awesome.

Both of these games feature character progression — something often missing from most virtual reality games.  They also come very highly recommended, and I can’t wait to hear what you have to say about both of them.  Check out the Let’s Play videos in both, and then jump into our contest and get your ninja / wizard power fantasy!  (You can hit the left and right arrow to log your entries for the right game)

Sairento and The Wizards PSVR Giveaway