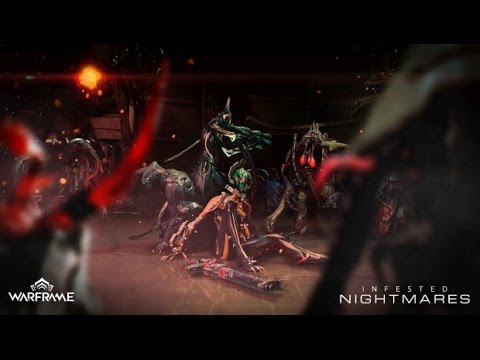 I’m not a huge fan of free-to-play games as a general rule, but there are occasionally games that surprise me.  It’s usually the FPS titles that pull me back in over and over.  PlanetSide, Tribes, and now Warframe.  If you’ve not checked out the game for yourself, I’ll give you a bit of a primer before we get to the awesome giveaway we are sponsoring.

Warframe, being perfectly frank, feels like Destiny and Tribes had a baby via some sort of anime invitro fertilization.  Yea, it’s that kinda crazy.  You’ll pick from a handful of frames that serve as a biomechanical armor suit that grants skills that approach Jedi force powers.  From there you’ll tackle a training mission to learn how to play the game, heading to your own personal ship. This ship serves as your personal base of operations, allowing you to upgrade, select new warframe exosuits, and snap up new weapons.  If any of this sounds incredibly awesome, you’ve got the right idea.

So, sure, you can snap up the game by yourself at the official site, but here at Gaming Trend we are giving away special codes that will give you a special 3-day credit boost in celebration of their “Infested Nightmares” event this weekend.  Best of all, we have codes for PlayStation 4, Xbox One, and PC, so no matter what your particular platform of choice, we’ve got you covered.  Below is a nibble of what you can expect from the Infested Nightmares bonus weekend, but let’s check out the video of the game in action first:

HIGH-REWARD ALERTS
Take on High-Reward Alerts between August 13 at 2 p.m. and August 17 at 2 p.m. EDT and earn some valuable Rewards!

Without further ado, we’ve got some simple entry methods below to check out the game. Go snap up your account at the official site and then pop back over here to get your loot crates.  These codes we have give you a 3-day credit boost that doubles the amount of credits you get from pickup in ADDITION to the events listed above.  Who takes care of you?  We do!   Now get out there and experience the strange-awesome that is Warframe.