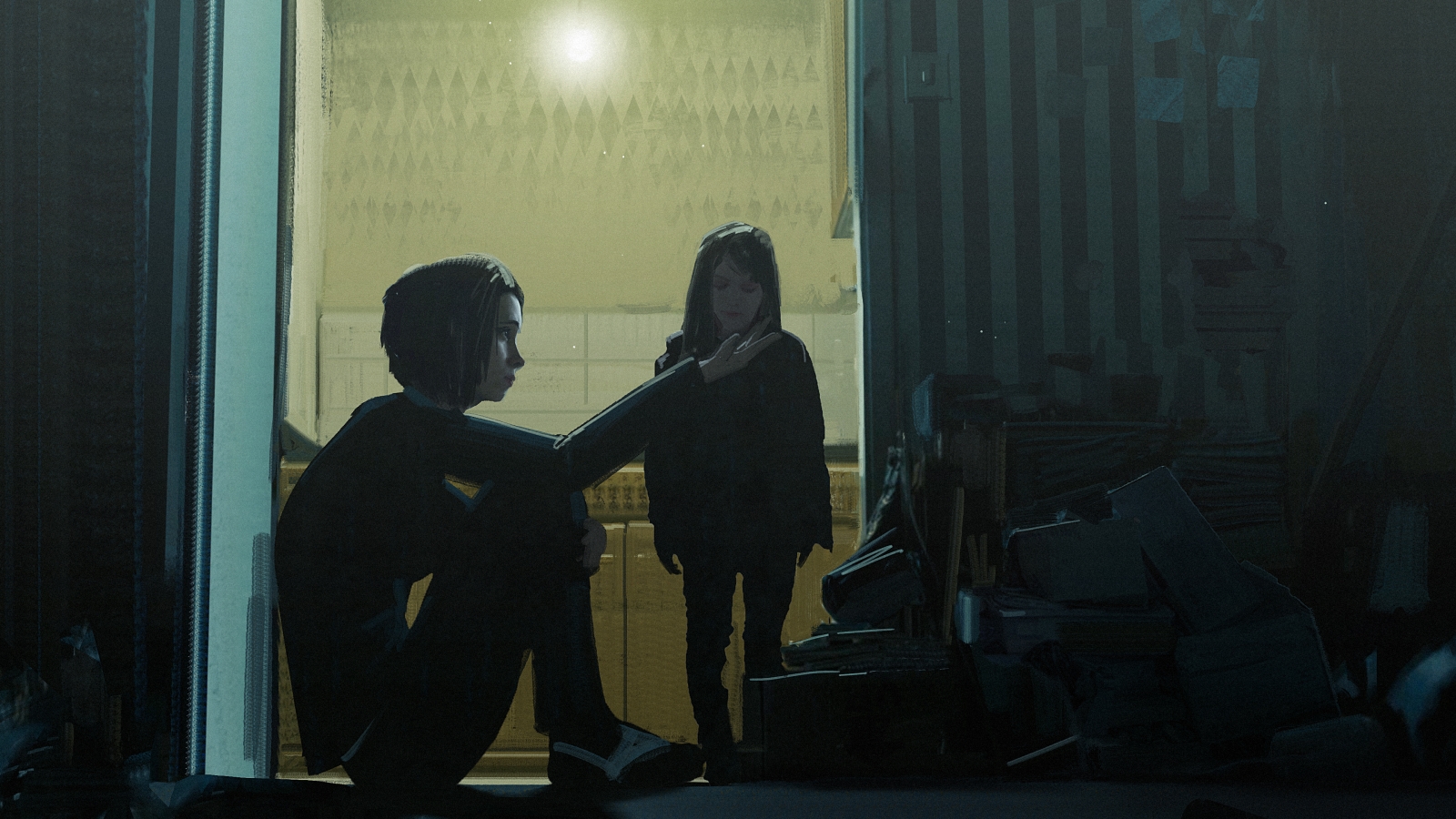 The Camarilla of Boston has issued a Code Red to all Vampires in the city. A party that night has gone horribly wrong, with all attendees either destroyed or staked. While the few who remain at headquarters bicker and fight over who’s at fault and what’s left, three Kindred are tasked to investigate by the prince – to discover who attacked them and hide any evidence of the supernatural. Emem, Galeb, and Leysha need to navigate the underworld’s politics to survive, let alone come out on top.

Vampire: The Masquerade – Swansong is a bit of an odd duck. It lies somewhere between a Telltale style adventure game and an immersive sim like Deus Ex. Each chapter, you play through three scenes as each of the three main characters, relying on stats and powers you purchased with experience points to win arguments, interact with the environment, and solve puzzles. It’s got a lot of flaws, but this unique blend of interactive storytelling and character building makes for an incredibly interesting adventure.

Swansong unfortunately makes a terrible first impression. The game begins with a lengthy text crawl to give you the basics of the World of Darkness, and that’s essentially all you’re getting in terms of explanation of proper nouns unless you dive into the Codex. You’re then introduced to all the important players through Emem’s eyes in an overly long, confusing, and ultimately boring sequence. Once each character has their mission is when things finally start to get interesting, but it can be hard to even get to that point thanks to various glitches like NPCs not spawning where they should or your character getting caught inside a door requiring a level restart. These persist throughout the game, and it’s the clearest sign Swansong needed a bit more time in the oven or a bigger budget to match their ambition.

The problems don’t end there though: the writing early on can be hard to follow, some puzzles just don’t give you enough information to solve them, some skills are more useful than others, and oh yeah the animations are terrible. Lip-synching appears to be completely automated and ends up not matching anything, and pretty much any animation other than walking or feeding on someone looks uncomfortably stiff. I was very worried this would end up like another Werewolf: The Apocalypse – Earthblood, and yet… 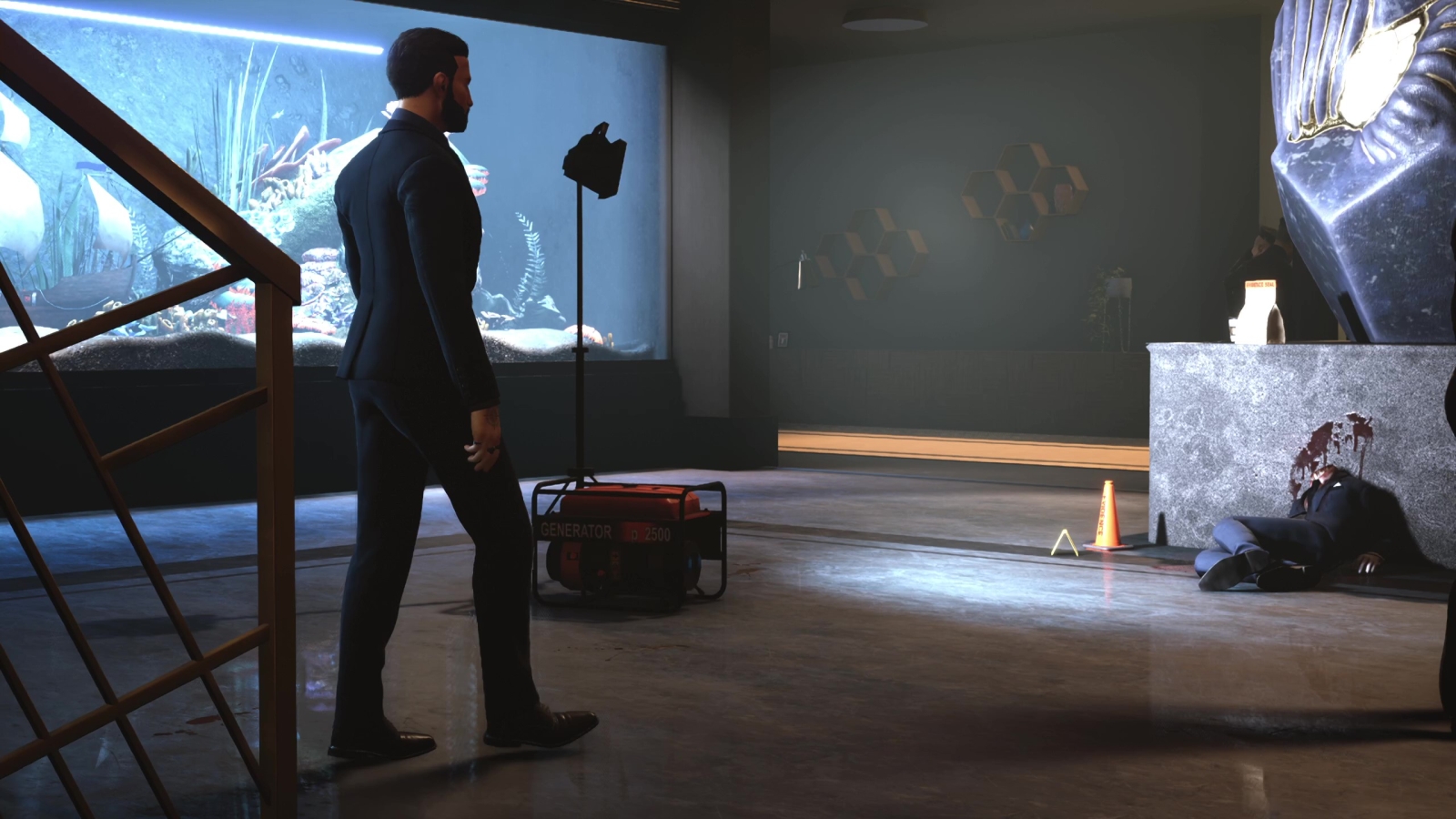 I was having an absolute blast once I got into a proper level. You’re usually given a seemingly simple objective, then let loose to accomplish it however you see fit. In Leysha’s first level, you’re asked to remove any evidence and rescue survivors from the mass murder scene all while it’s being investigated by both the cops and the feds at the same time. To do this, you can use vampire vision to see hidden objects, turn invisible to get into areas you’re not supposed to, and even take on the appearance of another person for a bit more authority. The mission of course gets more complicated as you progress and find out what’s going on, but everything save for your main objective is completely optional.

As you play and discover more and more complications, you may only be able to resolve some with specific character builds. If you can’t convince a character to tell you their secret or simply leave a room, that’s it. If there’s no other way through with other skills like lockpicking or utilizing powers such as Dominate, you can’t complete that objective. The game walks a tightrope with overall open ended levels with some routes leading to dead stops, but it manages to do some cartwheels and backflips along the way because there’s no wrong way to build a character. 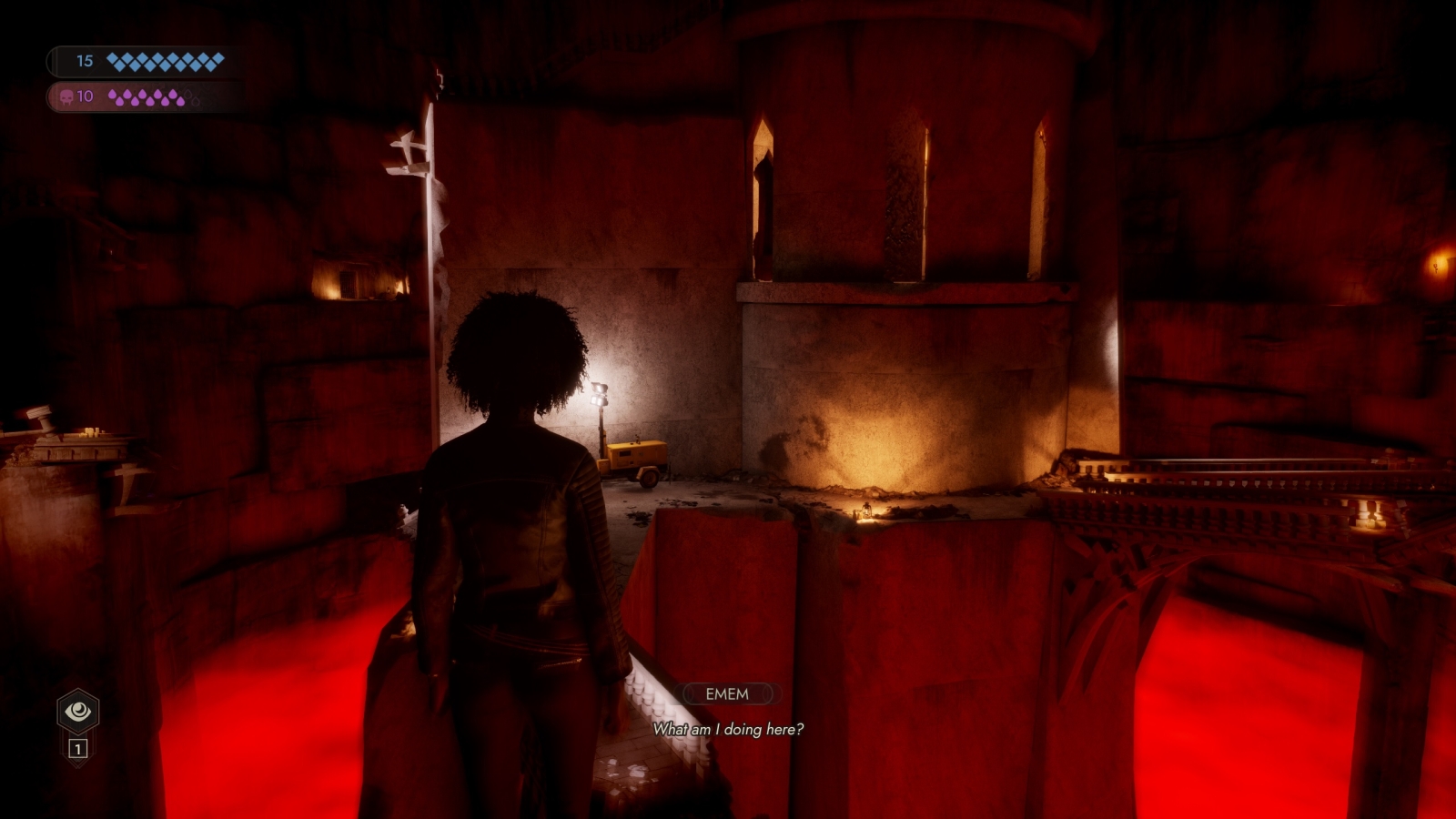 While I do think there are one or two too many skills, especially dealing with dialogue, putting points into anything is always beneficial. You may miss out on finding the Hacker leader by not investing in Hacking, but a decent lockpicking skill may just allow you to find some information to blackmail another character into helping you. Sure the glitches are frustrating to a fault, but there’s not a whole lot of games that make creative problem solving this engaging and satisfying.

Of course, all that power doesn’t come from nowhere – it comes from the willpower and hunger meters in the top left of the screen. Most actions consume willpower, but if you find your skills just a bit lacking in conversation you can spend even more to boost your numbers for that check. Everyone you converse with has their own stat sheets, and are able to boost theirs in retaliation, so even if the game says you have a 100% success rate on an action you can never be sure. Skill checks aren’t always the path to success either, so you need to carefully consider what you want to say and do, especially in Confrontations. Confrontations are essentially arguments in stages, where you can only fail a certain amount of times. These can be very difficult to win as skill checks will use more willpower or hunger than usual, so you have to keep an eye on how much you have left and even use items or equipment to give you an edge. 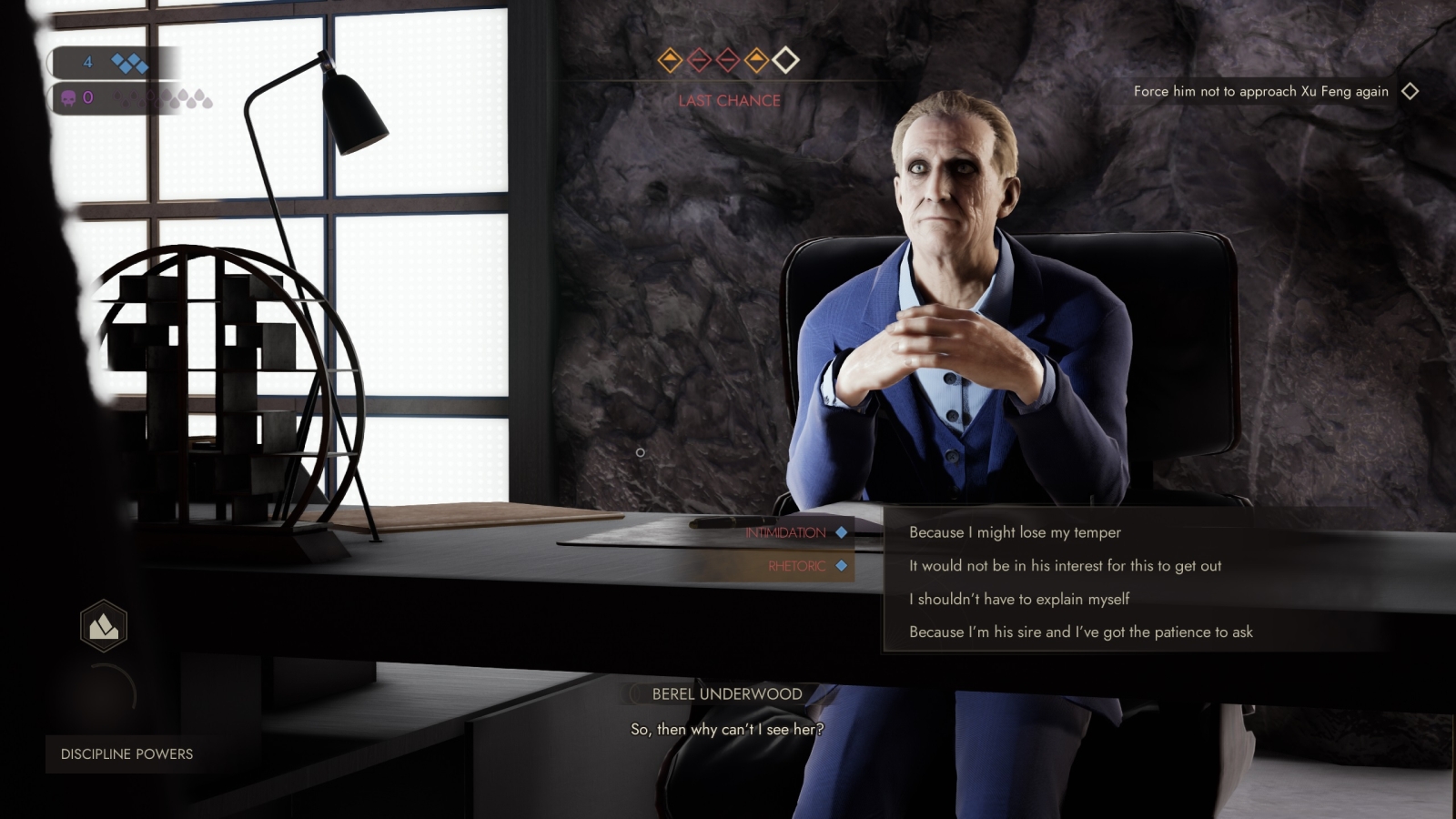 You can also use Vampiric powers both in and out of conversations, though each use will increase your hunger. There’s no big penalty for reaching max hunger as far as I can tell, other than not being able to use more powers, but just like willpower you want to manage it appropriately because you never know when an emergency will require these abilities. As you can guess, you decrease hunger by feeding; either on rats or people. Feeding on a rat only decreases hunger by three or four points, but will slightly increase the suspicion meter after the level. I’m not entirely sure what that does, but I know you don’t want it to get too high. Feeding on people, on the other hand, takes a bit more preparation. You first need to find a safe room in the level, then a person you can hypnotize into coming there. Once you’ve got your fangs in them, you need to hold a button to determine how much hunger you eliminate, but holding it too long will kill your victim. Once you’ve done your business, that room cannot be used again, so drink responsibly. If you didn’t fully drain your victim, they will stay in there with the possibility of a second feeding, but doing so will for sure kill them.

You may not want to feed at all in a level, because everything you do builds up to permanent traits on that character. For example, not feeding for an entire level will actually increase the maximum amount of hunger you can stand, while constantly feeding and killing your victims will increase the amount of hunger eliminated from each feeding. Not all traits are good, however, especially some acquired through major story events. Getting damaged by the true faith after failing to resist an interrogation may permanently increase the EXP cost of certain skills, while talking your way out of a tough situation will permanently decrease the cost of others. You can’t succeed in everything, so all your characters will come out of each level scarred in different, interesting ways. 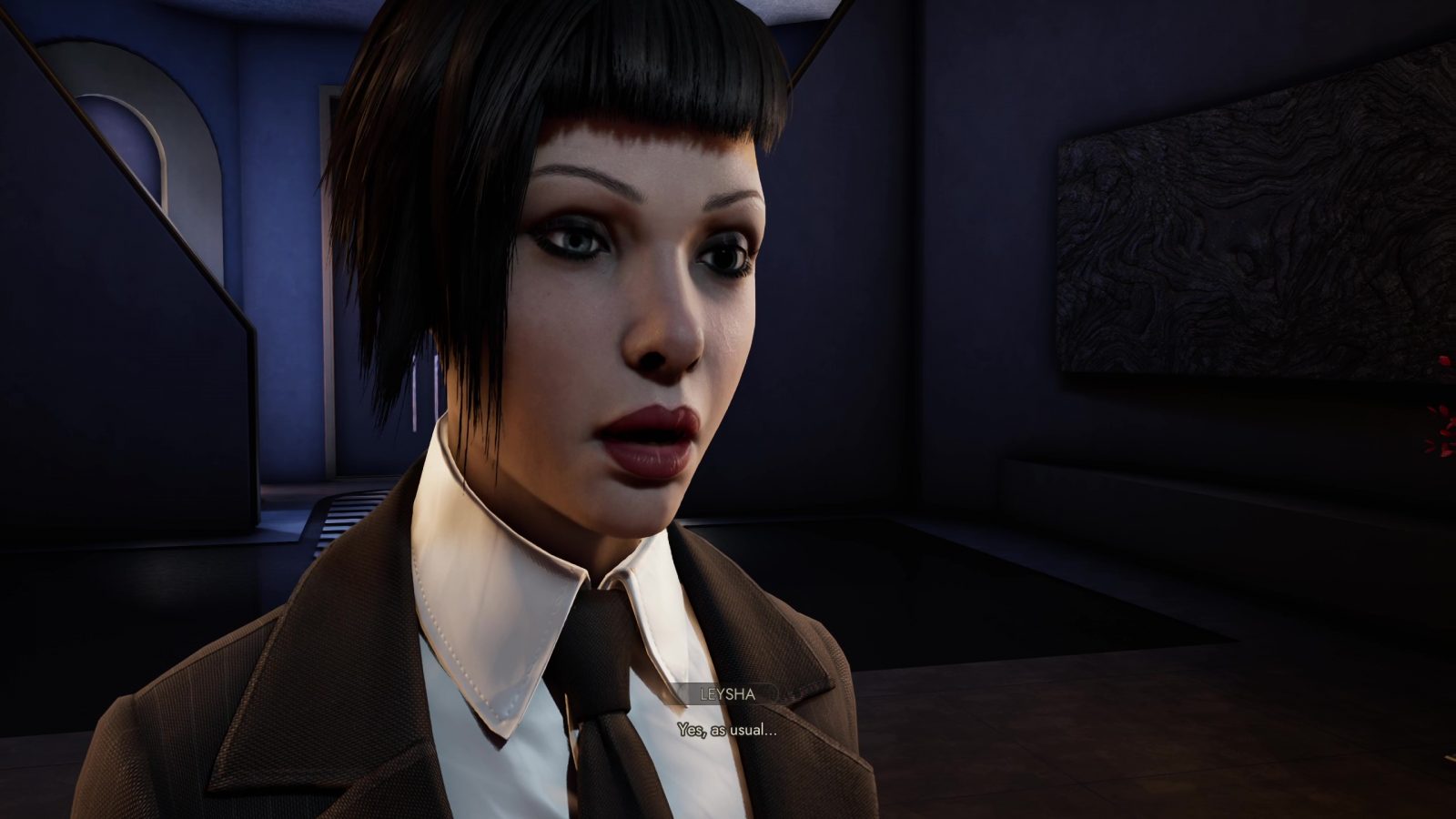 The characters themselves are another contentious point, particularly in their gameplay. Leysha is the most fun to play as, with her invisibility and disguise powers meshing the best with the level design and dialogue system. Emem is more middle of the road, with her levels focused on discovering optional secrets through skill checks and her teleportation ability. Galeb, while he has the best level in the game, is the most boring to play because he has nothing unique to him. He has some special options in dialogue, but so do the other two. While I do like all three characters in terms of personality, goals, and aesthetics, I think the game would have been better served focusing on one, preferably Leysha, and polishing the overall experience more – much like how Pathologic 2 released with only one character route, but said route feels like a fully complete game.

Once you get past the opening, the writing and voice acting are pretty good, though with a few missteps here and there. If you’re not intimately familiar with the World of Darkness, you better be ready to look things up in the Codex because Swansong spares no time explaining things to you. I can see the benefits of this, but as someone only sort of familiar with the universe the trajectory of the plot can feel confusing at times. They drop terms on you constantly, and in a scene where something is supposed to be a big revelation it doesn’t hit at all if you don’t know what they’re talking about and can’t look it up right that second because menus are disabled at the moment. 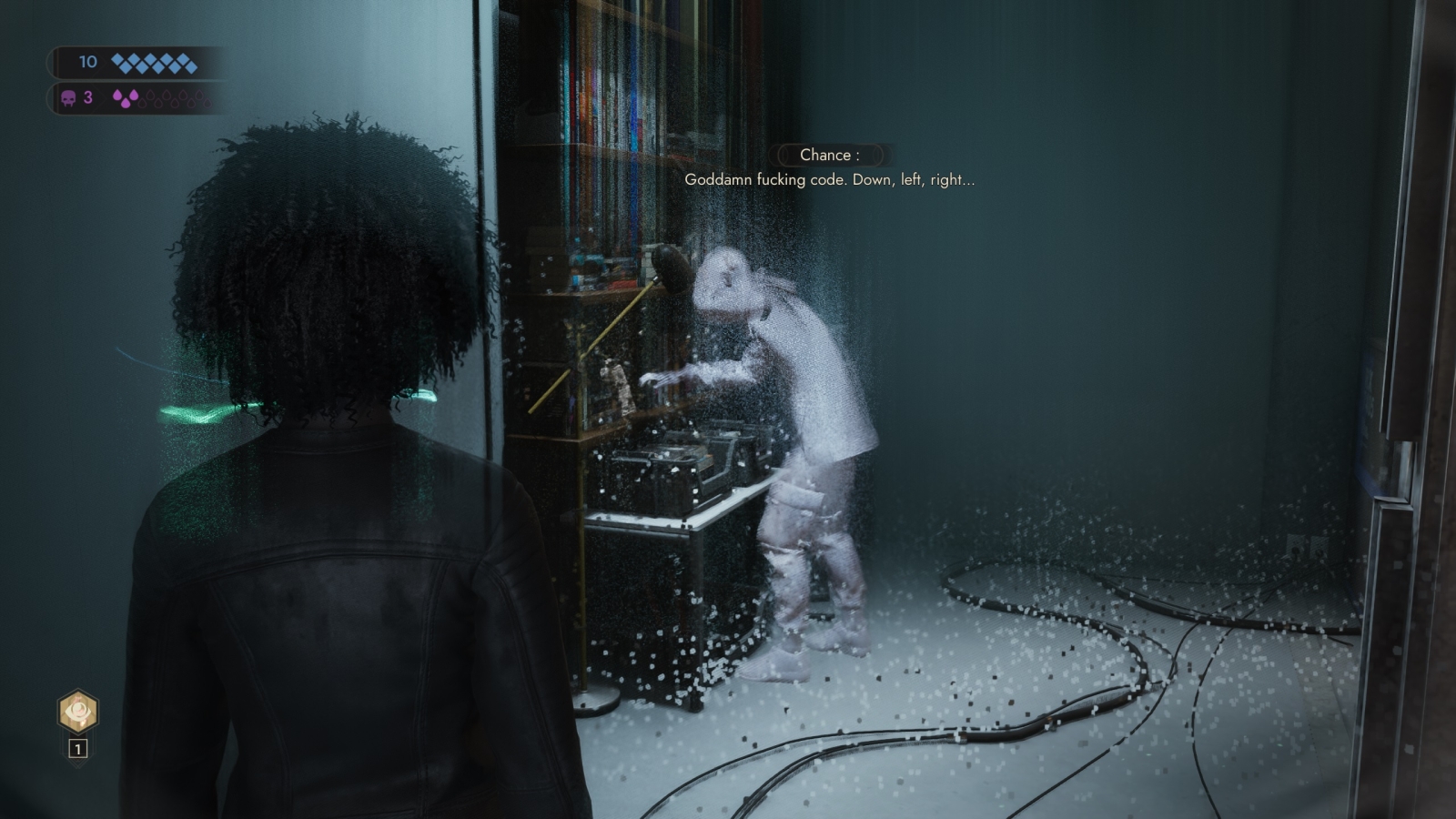 Swansong does excel at conveying the grim dark atmosphere of VtM, however. Things that would be considered humanitarian atrocities are just casually dropped pretty frequently with none of the characters batting an eye. When someone discovers an NPC is stealing corpses of drained vessels from a blood bar to sell on the black market, the problem they have with it is that the NPC isn’t sharing that cash with the prince. There are no good guys here, everyone is a horrible, irredeemable monster, but you still end up sympathetic to the plights of our three protagonists at the very least.

While the character models look janky and inconsistent in texture quality, the environments are absolutely gorgeous. They all feel detailed and lived in to an extent I haven’t felt since Shenmue 3. Not everything is interactable like that game, but that’s more of a strength than a weakness. This detail does lead to some objects getting lost in the shuffle, but that only makes replays all the more interesting to find things you missed. I sadly wasn’t able to finish the game in time for this review, I got stuck on a certain mandatory puzzle involving Oedipus that I swear I input the correct solution for but the game won’t accept it. If there’s more information to gather, I couldn’t find it after having to restart the level five times due to glitches or another puzzle not communicating what it wanted from me properly. I still plan on going back, the game is a lot of fun, but know that I didn’t get the full picture and was roadblocked just before the finale. I don’t know if there’s a new game plus either, but that would be a fantastic addition to the game.

Vampire: The Masquerade - Swansong is a fantastic, yet very messy game. It lacks some desperately needed polish and refining, but the core is so fun and engaging you can put the problems to the side for a time. They’ll rear their head pretty frequently, but pushing past them is well worth the rewards.

David is the kind of person to wear his heart on his sleeve. He can find positives in anything, like this is a person who loved Star Fox Zero to death. You’ll see him playing all kinds of games: AAAs, Indies, game jam games, games of all genres, and writing about them! Here. On this website. When not writing or playing games, you can find David making music, games, or enjoying a good book. David’s favorite games include NieR: Automata, Mother 3, and Gravity Rush.
Related Articles: Indies, Vampire: The Masquerade – Swansong
Share
Tweet
Share
Submit