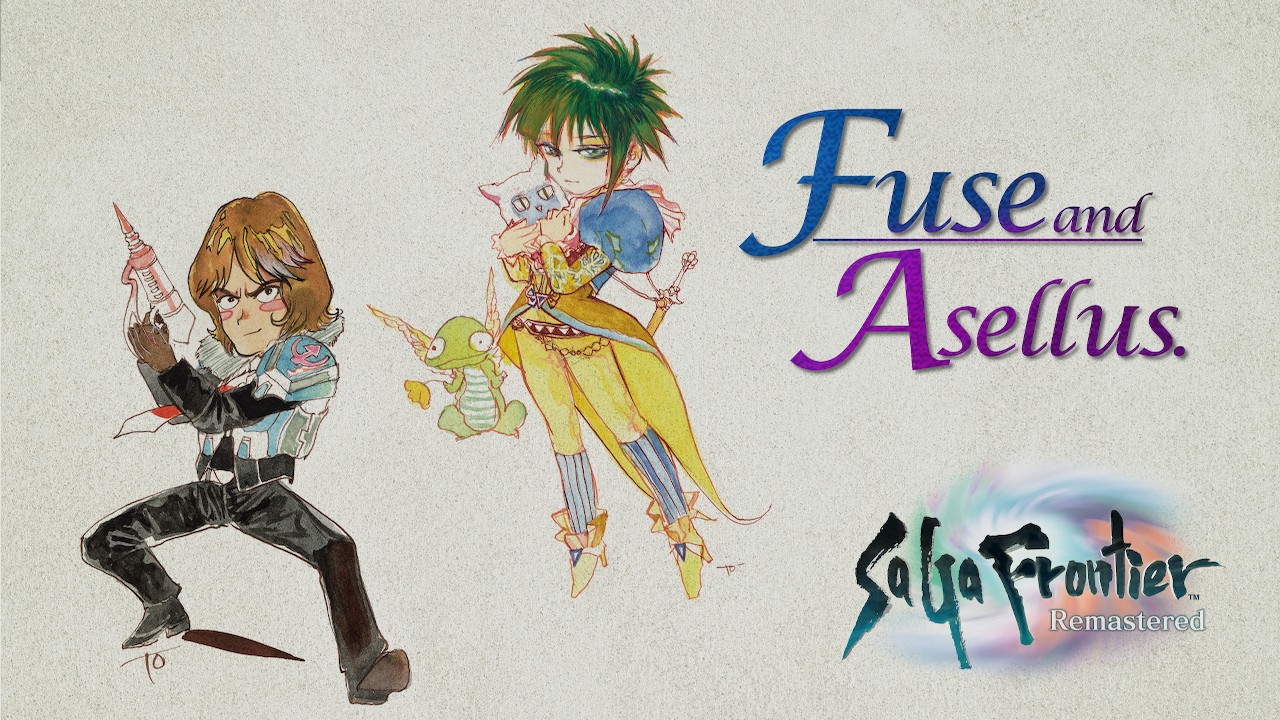 If there’s one thing RPG fans can agree on, it’s that grinding sucks. Some games, like older Dragon Quest titles, can do it right: spreading it throughout the game and making it just involved enough to put you in a zen like state as you rack up EXP. When it’s done wrong, however, it feels like a chore that stands between you and the good parts of the game. Now… what if there was a game that was entirely grinding? A game with hardly any plot, paper thin characters, and a simplistic battle system? Well, then you would have SaGa Frontier.

As the title of this review suggests, SaGa Frontier takes a page out of Final Fantasy II’s book. There’s no experience points; instead, your stats increase based on what you do in battle. In FF2 for example, if you wanted more health you would need to take damage and if you wanted to be good at black magic you needed to use black magic. It’s simplistic on the surface, but unfortunately most executions of this type of system fail miserably in that they’re either very easy to exploit, have a lot of grinding, or both. Unfortunately, Frontier Remastered falls into the latter. No matter which of the multiple protagonists you choose, you’re going to spend almost the entirety of their campaigns fighting the same monsters over and over and over in hopes to raise your stats high enough to challenge the next boss, then do all that over again for the next boss. 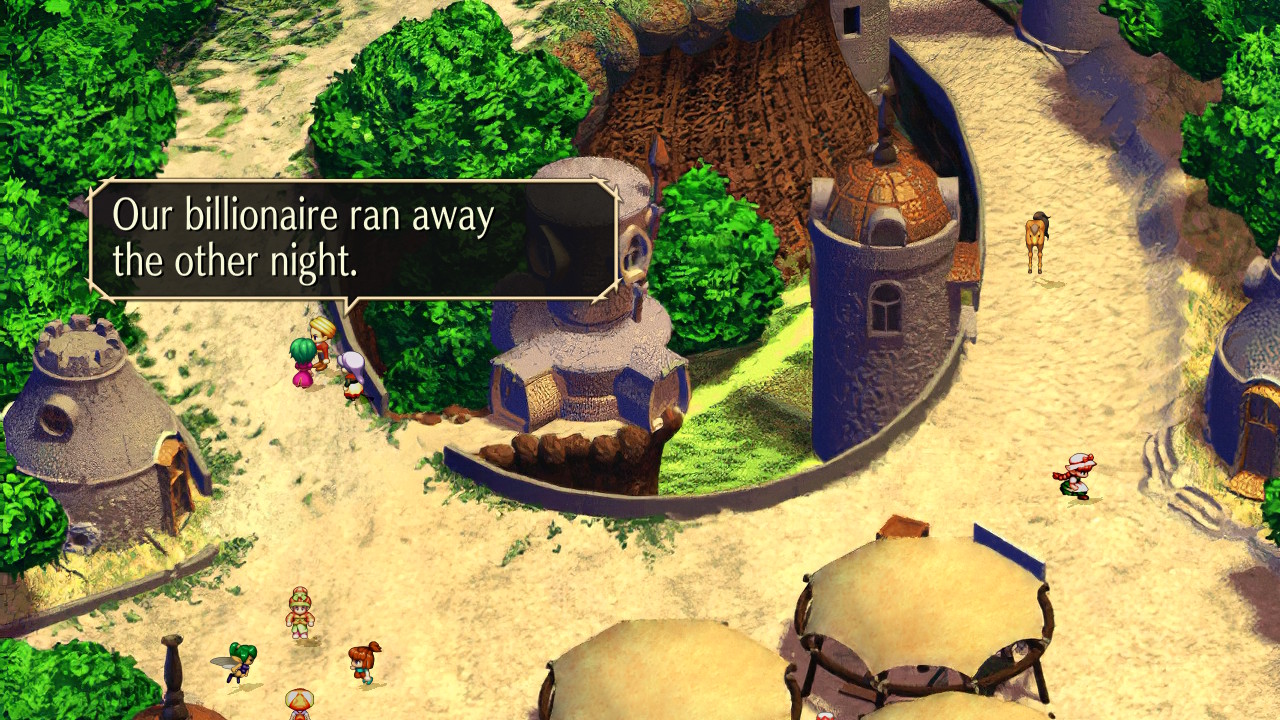 I chose Asellus as my first protagonist. She’s a human who, after being run over and killed by a carriage, awakens much later as the world’s only half-human half-mystic. A tyrant mystic named Orluge gave her some of his blood to save her life and now holds her hostage in his castle. She escapes along with a princess named White Rose, and the two wander around the world being chased by Orluge’s minions until eventually they return to face the man himself. It’s a neat idea for a story, but it never goes anywhere outside of that summary. Every character’s story is like this, in fact Asellus’ story is actually one of the most detailed and involved. I’ve played RPGs light on story before, so this isn’t the biggest problem as long as the battles are fun.

On that note, the battles aren’t fun. You equip each character with up to four weapons that they can use in combat, like swords, guns, and items. Attacking with said weapon has a chance for that character to learn a new skill in an event called a Glimmer and you can then use that ability whenever you wish consuming WP. For a Glimmer to pop though, you need to have at least one slot free in your Arts pallett. A party member can equip up to 8 arts, including weapon skills, spells, mystic equipment, and monster skills for monsters. You don’t really need to worry about filling up your slots though, you’ll only be using your most powerful skills and casters can’t learn spells through Glimmer anyway. Normal battles eventually boiled down to simply spamming regular attacks, while in boss battles you spam your strongest single target skills AND heal occasionally, because these bosses will destroy you. 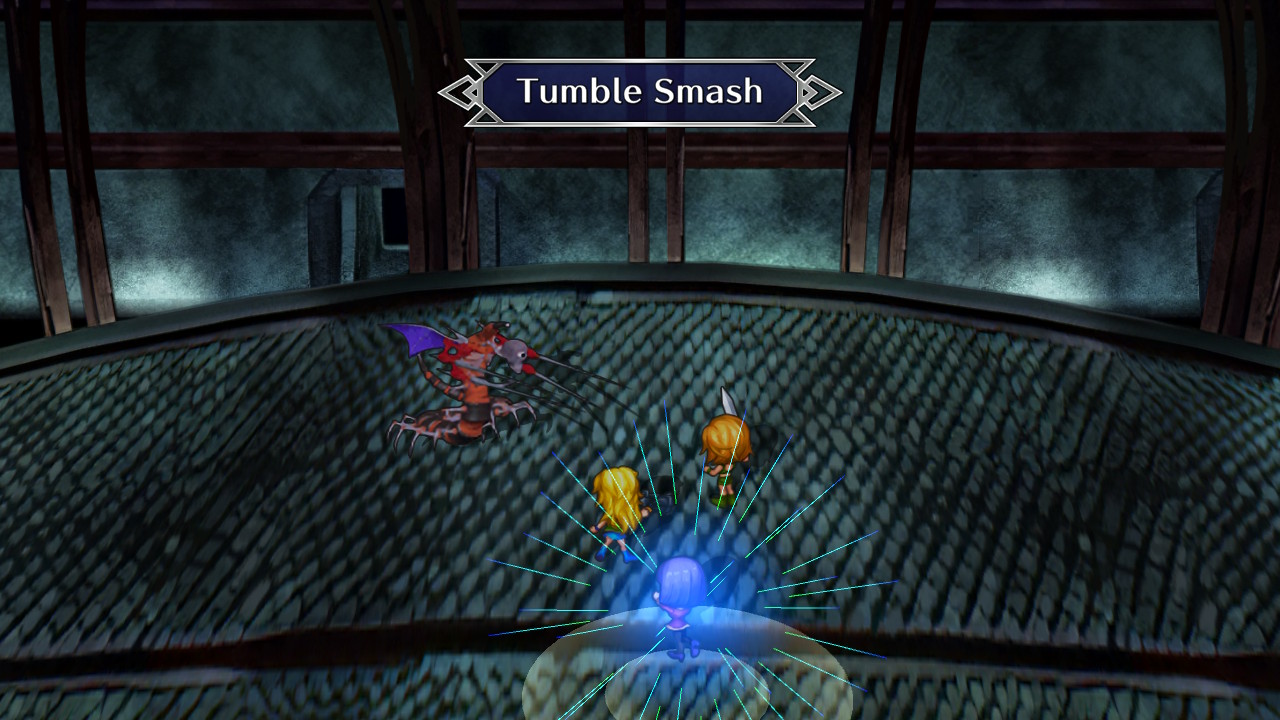 No matter how much grinding you do, every boss will be able to kill at least one party member instantly. Thankfully, you don’t need to lug around resurrecting items, because there are none in this game. Instead, we have the Life Points system: as long as a character has 1 or more LP remaining, they can be brought back simply by healing them. You lose 1 LP upon death and another for every time you’re attacked while dead, but you can fill them back up by staying at an inn. Again, this is an interesting system on paper and is done well in other SaGa games, but here it’s just tedious. For example, generally I wanted 2 to 3 characters with a healing spell or item so they could resurrect each other, thinking that would stop me from getting game overs constantly. Healing spells are very slow in the turn order though, so frequently I tried to heal a downed character, only to have the spellcaster die before they could cast. This cycle repeated ad nauseum until the game decided I had suffered enough and lucked out on attack patterns.

Again, this cannot be remedied by grinding, as you have very little control over how exactly your characters grow. The general rule of thumb is to do what you want to be good at, but nine times out of ten that doesn’t result in stat growth. The only thing I could consistently increase were the resources for weapon skills and magic, everything else would just go up whenever it felt like it (read: rarely). Of the 20 hours or so it took me to complete Asellus’ campaign, for example, I’d estimate around 18 of those to be grinding stats in hopes that they would finally increase, and the other 2 hours were boss fights, if that. This does not include time spent to eventually get a game over, which may increase that time by about 5 hours. Even with the new quality of life features, this game is tedious as hell is hot.

The quality-of-life features they’ve added are certainly welcome additions though. You can increase the speed of exploration and combat to either 2 or 3 times, quicksave wherever you want, rebind some of the controls (with odd limitations), new game plus, and most exciting there’s even an entirely new campaign. After finishing any other character’s story, you can then choose to play as Fuse. As a detective, Fuse’s story involves him investigating something surrounding the character whose campaign you just finished. After a few scenes (which is more story than any one campaign has) he can then tackle that character’s final boss who is made stronger depending on how many stories you’ve finished. It’s another great idea, but in practice it just involves a bunch more grinding since Fuse starts out weak like everyone else but is expected to jump straight to the final boss.

SaGa Frontier Remastered is a game for die hard fans of the original only. Veterans will appreciate the quality of life features along with the addition of Fuse, but everyone else will be put off by the sheer amount of grinding, barebones plot and characters, and tedious leveling system.

David is the kind of person to wear his heart on his sleeve. He can find positives in anything, like this is a person who loved Star Fox Zero to death. You’ll see him playing all kinds of games: AAAs, Indies, game jam games, games of all genres, and writing about them! Here. On this website. When not writing or playing games, you can find David making music, games, or enjoying a good book. David’s favorite games include NieR: Automata, Mother 3, and Gravity Rush.
Related Articles: SaGa Frontier Remastered
Share
Tweet
Share
Submit