Have you heard about the Midnight Channel? They say, if you look into a TV on a rainy night, you’ll see your soulmate! But, in the sleepy town of Inaba, people who appear on the Midnight Channel disappear, then are found dead a few days later. As a transfer student to the local Yasogami High School, having been granted a mysterious power to enter a world inside the TV, you and your friends resolve to save whoever appears on the Midnight Channel and discover the truth behind these serial murders.

Originally released in 2008 for the PlayStation 2, Persona 4 is a hybrid JRPG and social simulator; nurturing your relationship with others will help you become stronger when fighting battles when you enter the backside of the TV. It’s, ironically considering the murders, the more cheerful and optimistic follow-up to Persona 3’s ever present theme of death, and was the entry that really put the series on the map (though Persona 5 would later grant the series huge popularity) and this entry would spawn multiple spinoffs in the form of fighting games and anime adaptations. In P4, you’ll need to balance your school and social lives with investigating the attempted murders and fighting shadows in strategic turn-based battles within the TV world. Your social skills and friends, represented by the major arcana of the Tarot, will help you create new, powerful personas to better fight shadows with and, in turn, further your real life relationships. While the game does take about 3 hours of cutscenes before setting you loose, it’s a very satisfying gameplay loop that will keep you hooked through the entirety of your year in Inaba. 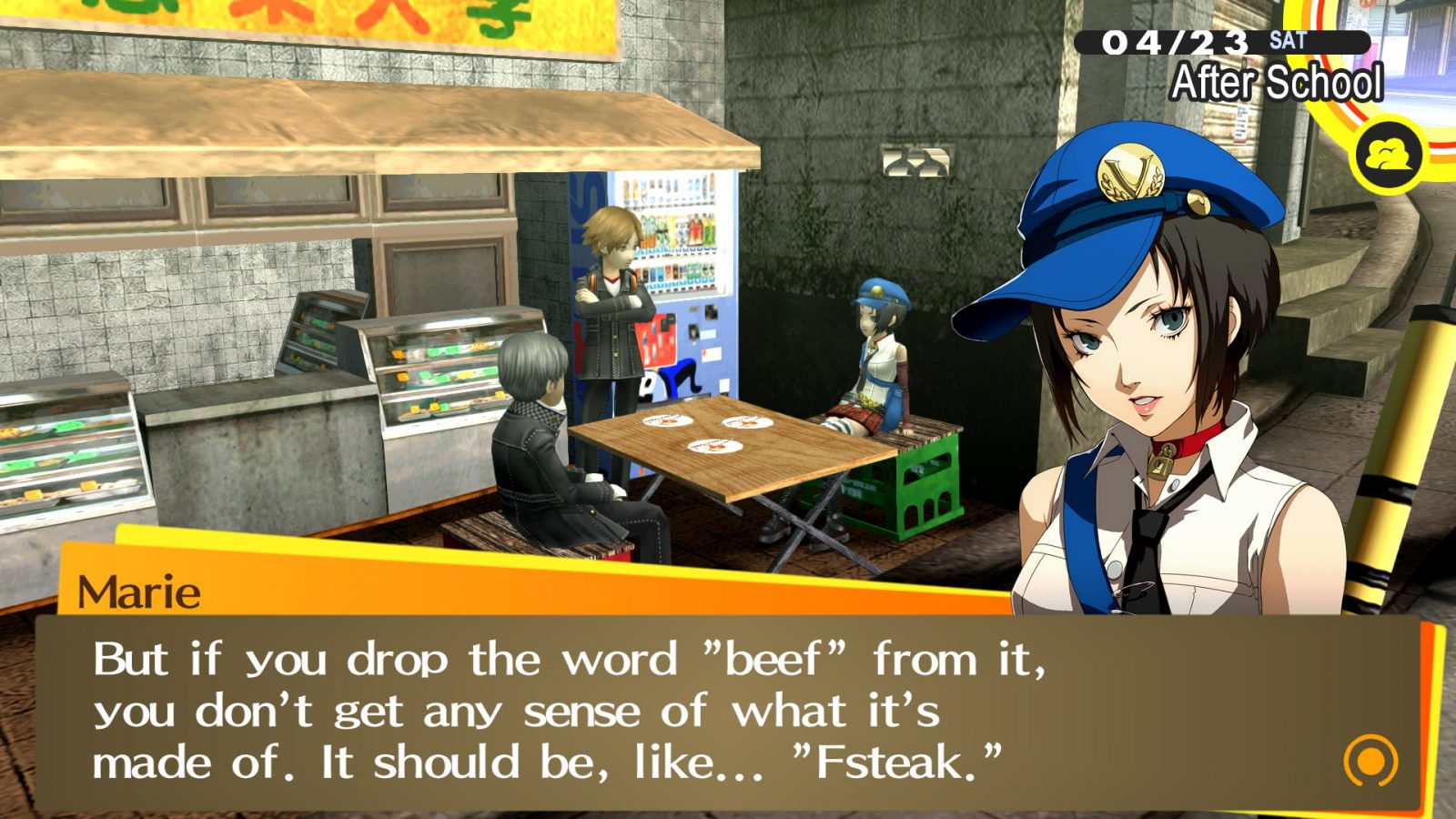 Like Persona 3 FES before it, P4 would see a massive improvement in the form of Persona 4 Golden (Side note: this re-release would be the first to drop the moniker of Shin Megami Tensei, solidifying it as its own series and not just an SMT spinoff). Golden added two new Social Links, people you build relationships with to gain new power, in the bumbling, dissatisfied detective Adachi and the entirely new Marie, a resident of the series staple Velvet Room, as well as several new activities, story beats, Personas to acquire, a quiz show about the game, and tons of new content that can completely change your year in Inaba. P4G was released on the PSVita in 2012 and is regarded as the best version of an already fantastic game. Now, Atlus has dropped the game on Steam, complete with the expected graphics options and even mouse and keyboard support. We got to spend a few weeks with the game before this surprise release, so how does it compare to the original and Vita versions?

First, a little on my history with the series. I started with Persona 3 Portable as an edgy teenager and was immediately hooked, after finishing that I was lucky enough to find a complete copy of Persona 4 on PS2 (which I loaned to a friend in high school and never got back) and, as I was about halfway through the game, Golden was announced so I waited to restart the game with that version. P4G was one of two games I bought a Vita for, along with Gravity Rush. I played it at the perfect time in my life, when I was in high school and before I had really made any friends there, so needless to say the game means a lot to me. It may sound corny, but these characters are so lovable and well written that they helped me feel less lonely in a difficult time. The spinoffs and continuations, in my opinion, don’t have the quality or depth of writing as the original, so playing this game again for the first time since then feels like a breath of fresh air. The story is just as gripping, the gameplay just as addictive, and the struggles of the characters just as real, if not more so now that I’ve gone through my own tough times.

So, now that we’re all up to speed on just how good P4 is, let’s get on to what everyone actually wants to know about – the quality of the PC port. Overall, it’s great, much better than I thought it would be going in. There are a sufficient amount of graphics options like adjusting shadow quality, anti-aliasing, and anisotropic filtering. For those who want to run their PS2 games at the highest quality and framerate possible you can adjust V-sync to unlock the latter or adjust the rendering scale for the former, from 50% to a whopping 200%, so while I was only able to run the game at 1920 x 1080 resolution in the display settings, the game could go up to twice that if your PC can handle it. On my laptop, an Acer Nitro 5, was able to run the game at a consistent 60 fps with a 175% resolution scale when not capturing footage, all footage here is at 100% resolution scale. This new clarity is somewhat of a double edged sword. On one end, the game looks amazing. Everything is so clear and you can see so many details you weren’t able to make out before, like the calendar in the Hero’s room has the cover of Persona 3 on it or the creatures flying away in the shopping district when you approach actually look like birds now instead of chicken nuggets. The UI likewise is crisp and stylish in a way that may actually match P5, though it’s not nearly as ostentatiously fabulous. The caveat here comes with the fact that this game was never really meant to be seen in HD; it was designed in a time of tube TVs and 4:9 resolutions. You’ll be able to see right through every trick the game pulled to look as good as it did back then; for example, trees are essentially just multiple leaf looking textures piled on top of each other. If you’re like me and enjoy seeing these developer shortcuts and technical wizardry, this will actually be pretty cool, but others may be turned off by the game’s age in this aspect. I’ve also had consistent stuttering problems with the anime cutscenes, which could be a result of my particular PC, but regardless it was disappointing and took me out of the game during some of the emotional or epic moments. 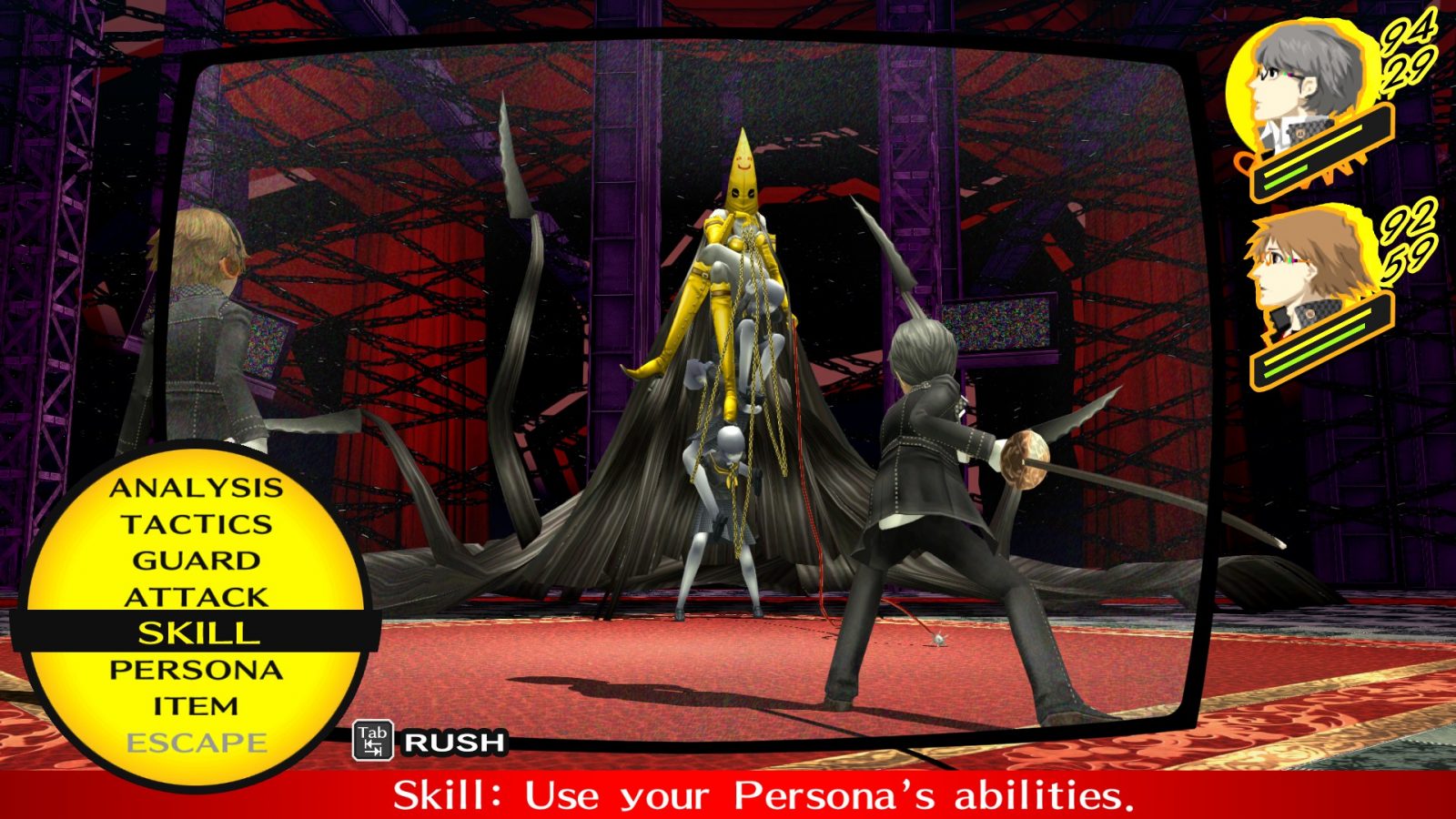 While P4G has so far only been playable with a controller or portable game console, I actually think that the keyboard and mouse control scheme is the vastly superior way to play the game, again with a few small caveats. Navigating those stylish, rainbow colored menus just feels right with a mouse and can speed up the relatively slow battles when compared to its sequel. However, camera control in the fully 3D areas can only be done with the keyboard which can make maneuvering around shadows to get the advantage in battle a bit more cumbersome than it should be. The final gripe I have with the mouse support is that it cannot be used to change targets in battle, that again is locked to the keyboard or the scroll wheel which can be very finicky with menus. It is worth noting that if you wish to change the key or button assignments in any way you are able to do so through the options menu, for a gamepad as well, though the defaults worked just fine for me.

Persona 4 is still one of the best JRPGs of all time, and this port only further proves that while clearing up your vision of Inaba and adding a new control scheme with which to Face Yourself. With this PC version bringing along the enhancements and new features of Golden, there’s never been a better time to Reach out to the Truth for newcomers or for veterans to Make History.

David is the kind of person to wear his heart on his sleeve. He can find positives in anything, like this is a person who loved Star Fox Zero to death. You’ll see him playing all kinds of games: AAAs, Indies, game jam games, games of all genres, and writing about them! Here. On this website. When not writing or playing games, you can find David making music, games, or enjoying a good book. David’s favorite games include NieR: Automata, Mother 3, and Gravity Rush.
Related Articles: Persona 4 Golden
Share
Tweet
Share
Submit