One thought that has likely crossed your mind at some point is “how could that have played out differently?” or at least some variation of the question. Most cases tend to be real life decisions like asking somebody out, deciding where to go after work, and so on, but this question comes to mind for many gamers as well. Sometimes it’s during choice-based gameplay, while other times it involves how you act during combat. Regardless of the situation, there are times when you regret a decision and want a do-over. Well you’re in luck because Iron Danger features time manipulation in order to do just that, albeit on a smaller yet more detailed scale. This feature along with the several characters you can control, gives you a multitude of abilities to help you take down your foes in a fight against tyranny.

The story follows a young woman named Kipuna when her town gets attacked by the tyrannical Northlanders. Kipuna is saved by a blacksmith named Topi, who guides her through the rapidly collapsing town and protects her. During their escape, the ground crumbles beneath Kipuna and she drops into the chasm below, impaling herself on a large stone shard. A mysterious spirit known as the Aurolith appears and tells Kipuna that now is not her time to die before reversing time to before Kipuna fell into the hole. The only difference is that the shard is still sticking out of Kipuna’s chest. She is able to move just fine, although she is in a fair amount of pain. Now knowing about the crumbling ground, you can avoid that spot and safely escape with Topi. The two of you sail away on a boat and head to King Antheor, and even make a trip to see the mysterious Healer along the way. With these two encounters, your journey to gather the rest of the Aurolith shards and acquire their power begins. 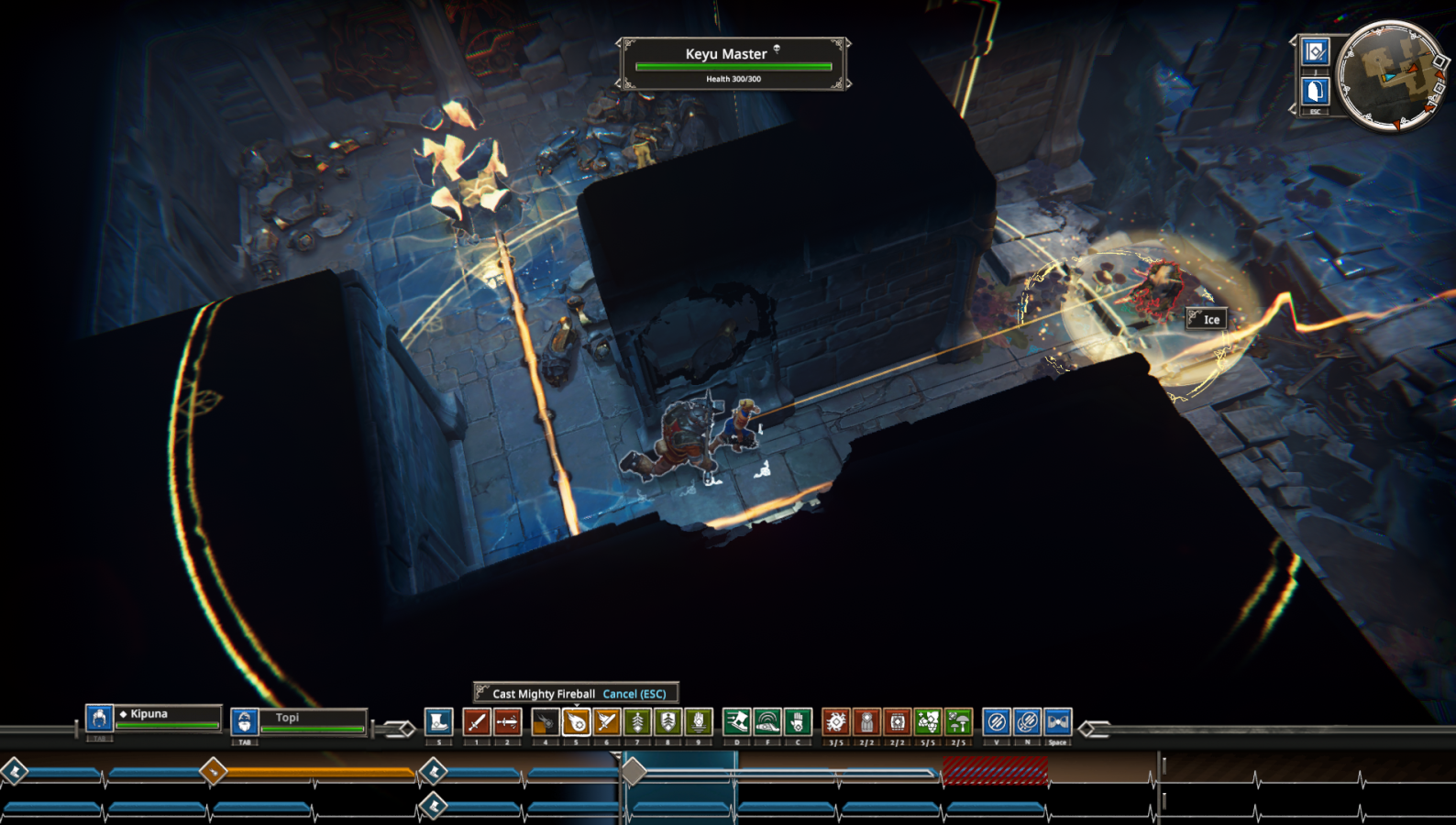 The gameplay is a mix of ARPG elements and tactical combat, which is an interesting combination. For the bulk of the time, you’ll be controlling two characters’ movements by pointing and clicking in real time. When you engage in combat, you enter a trance state, which is basically time stopping. You can choose what moves each character takes separately or together. A long meter appears at the bottom of the screen, with two rows that each contain 15 sections. Each of these rows represents one of your two characters, while each section represents a heartbeat. The 15 heartbeats amount to about five seconds of real time, which may not seem like a lot at first, but in Iron Danger, it can make a difference. As time passes and moves are made, the meter progresses and a different segment of heartbeats is tracked. If a move is made that you don’t like or results in the death of a character, you can roll back time to anywhere on that meter and do something different. This is immensely important as it not only saves your characters’ lives, but it allows you to strategize more effectively by giving you time to think and see how things play out. It takes a lot of trial and error, but it’s better than the typical “die and restart at a checkpoint” system for a game like this. The checkpoint system is nice, but repeating areas can be annoying.

As great as the time rewinding ability is, it isn’t the only one at your disposal. Kipuna, Topi, and the other characters you meet along the way, all have their own skills that can be used in ARPG fashion. They have a set range, damage, cooldown, and amount of heartbeats they take to use. You can be interrupted in the middle of a move and realize that you need to do something differently, so keep that in mind. Topi relies purely on close combat moves and acts as sort of a tank fighter, while Kipuna is more of a ranged magic user. She acquires fire magic early on, but each time she obtains a new shard, she learns a new set of skills. These include controlling ice, nature, fear, and a few other things. As time passed, she quickly became my main damage dealer and I focused on letting her take down most enemies. You don’t have any healing skills early on, but thankfully you can collect some mushrooms and berries that can heal your characters when eaten. I only used them a few times, but they were nice to have in emergencies. 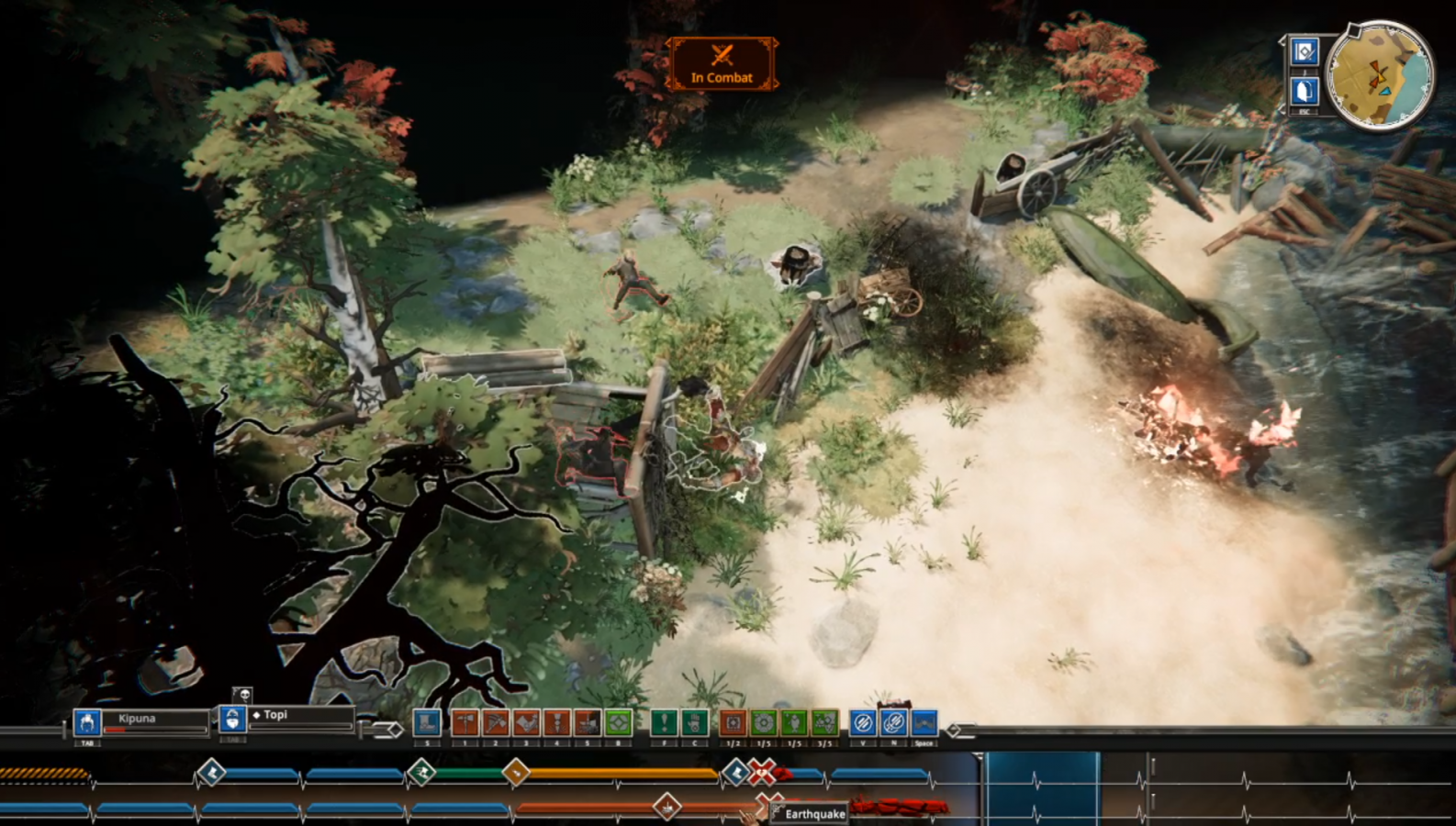 Unlike many other games, there’s no leveling up or experience to earn. After completing certain levels you’ll be prompted to select one upgrade from a list. What you go for is your call, so choose based on how you want to play. I focused more on damage dealing upgrades instead of defense or debuff upgrades. It’s nice not having to worry about grinding for experience and upgrades. Instead, the pacing is set to keep you challenged without overwhelming you too much.

The levels are laid out nicely, with a map showing you where you need to go. Each level has a certain area you need to reach, so you’ll end up fighting enemies along the way and sometimes when you reach your destination. The levels themselves aren’t usually very long, but that can be extended based on how long your combat encounters take you. When you complete a level, you start the next level fully healed and with your skills restored. The one slight bummer is that the mission structure is fairly repetitive and predictable. You typically sail to a location and must find a temple for a level, then the next level is traversing the dungeon and reaching the shard, followed by a dream-state level that teaches you the new set of skills, leading into a level where your goal is leaving the temple, and then finally a level where you must make it back to your ship. This formula is used multiple times and it’s a bit boring, but the interesting combat helps make up for it. There are other level layouts and goals, but the aforementioned setup is used enough to be noticed. 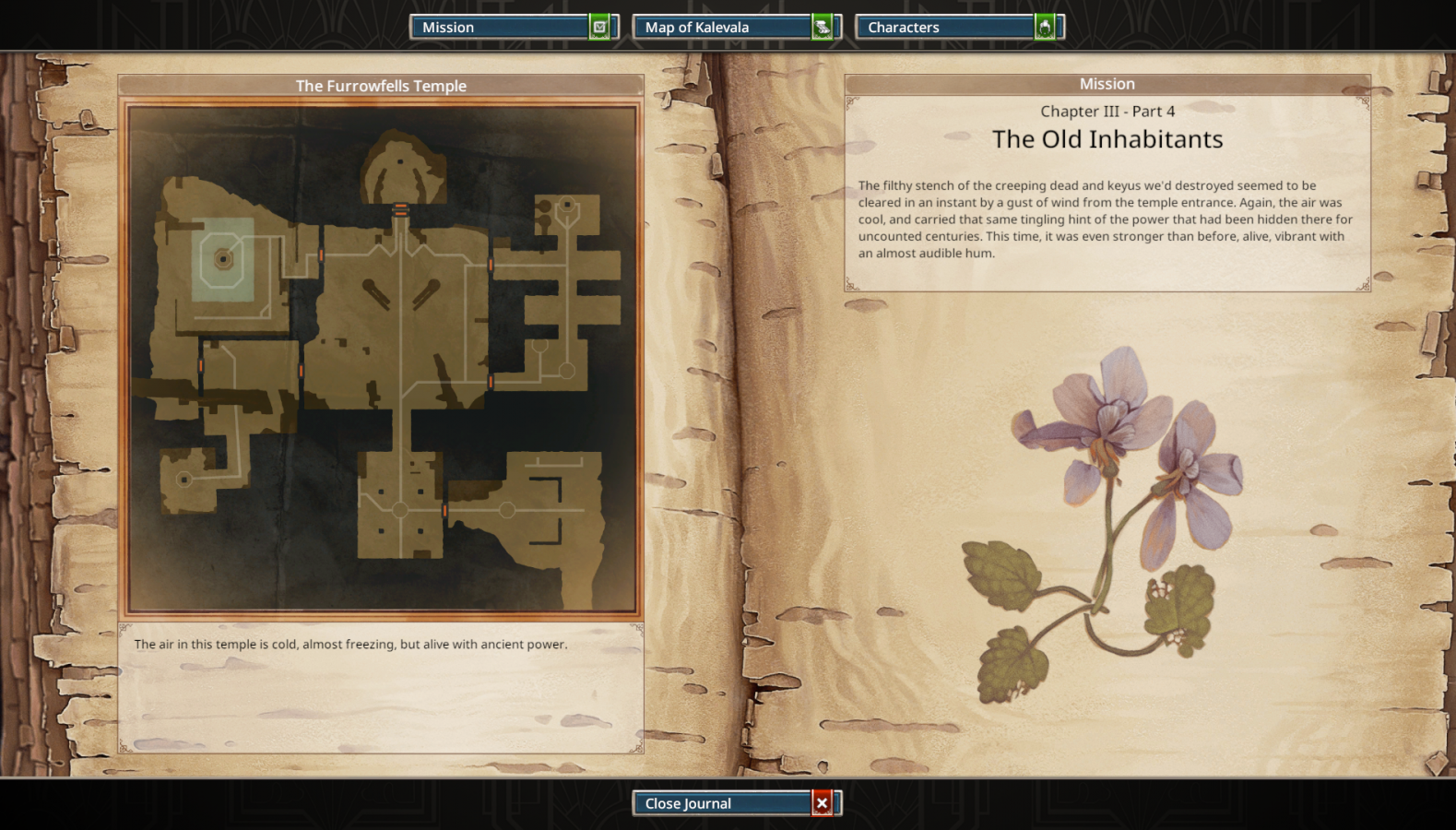 Now, let’s talk about difficulty. It’s not a hard game, but it’s definitely not easy. If you make your moves carefully and use your skills wisely, then you’ll make it through the story while facing a good challenge. Get too reckless or oblivious and you’ll have a bad time. There were some encounters that made me frustrated, especially a few rare ones where I felt so outnumbered that all I could do to survive was run far enough away from the horde of foes. I didn’t like doing that, but the several moves I tried only ended up in death, so I had to bail fast.

In terms of length, I took around 13 hours to beat it, although some of that time was the game sitting idle while I had to take care of some chores, so take that with a grain of salt. Overall, for what the game was, I thought I got a good amount of playtime with it. My biggest concern with the length is a spoiler, so I’ll give you a chance to avoid it now if you want to go in blind. Near the end of the game, your crew is heading to confront and take down a Northlander general named Kouko, who controls a giant iron bear. After defeating him and his mechanical monstrosity, Kipuna states that she is heading to the Northlander empire in order to take the fight to them and end the suffering. Her crew agrees to stand by her side and they head off. A cutscene plays where your ships starts sailing towards the menacing looking empire, giving you a feeling that you’ll be storming the empire and taking down their King or something like that. During the cutscene, the credits start rolling. I was so confused that I reloaded my last save and went through the crew’s last conversation again to see if I missed something. No such luck, it turns out the game is over. The ending felt so abrupt and unsatisfying that I didn’t know what to say. There wasn’t even an epilogue cutscene or a paragraph that summarized what happened next. You’re left wondering what Kipuna and friends did, if they were successful, and what happened after their potential victory. All in all, the ending could’ve been handled way better. 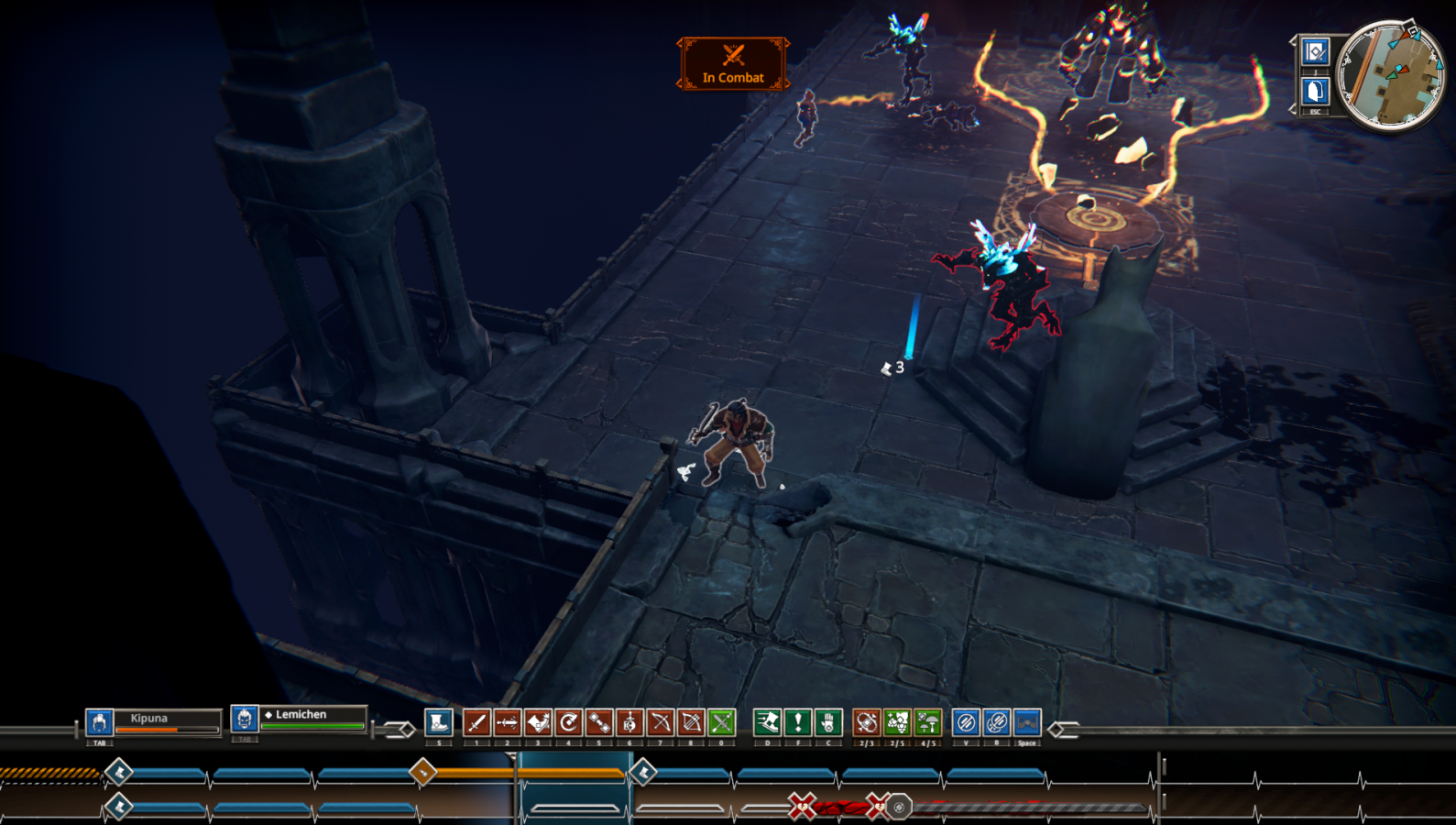 In the end, Iron Danger is a good game for what it is. The mix of ARPG and tactical elements makes combat pretty fun, although some fights can get frustrating. The length is good, but the ending was extremely lackluster. That being said, I’d say it’s still worth checking out, but keep in mind everything I mentioned above before you do so. If you’re fine with those concerns, then you’ll have an enjoyable time with Iron Danger.

Iron Danger is an interesting story of a young woman who obtains magical powers from a shard impaling her. The tactical combat and ARPG mechanics make for clever gameplay and a lack of grinding, although some fights are frustrating. The story itself is good, but the ending drags it down a lot by leaving you unsatisfied and wanting more.

Codi loves to play video games and watch movies. He will watch almost any kind of movie just to experience them. His ideas take inspiration from the shows and movies he watches, and games he plays. He also loves a good pun.
Related Articles: Iron Danger
Share
Tweet
Share
Submit