They say that the best way to kill a snake is by cutting off its head. This phrase has been used as a metaphor and is represented in works of fiction and reality. For example, in the previous Zombie Army games, they believed that eliminating Hitler would destroy the undead armies that he has summoned, thus ending the war. Unfortunately, even after Hitler has been cast into the depths, the undead hordes continue to fight on in his stead. It’s up to you, and possibly up to three of your friends, to wipe out their forces and win the Dead War once and for all.

The story follows a group of volunteer soldiers as they help the resistance wage war against the undead. It seems as if the zombie army is growing in strength and is hitting the humans harder than before. You need to find a way to deal some devastating blows if the human race is going to have any chance at survival. Without spoiling too much, your tasks involve defending against a train filled with zombies, providing support to a base that is being overrun, fighting to take down a demonic tower, and much more. You’ll be traveling around a lot, which gives you plenty of refreshing locales, even though they’re filled with death and destruction. 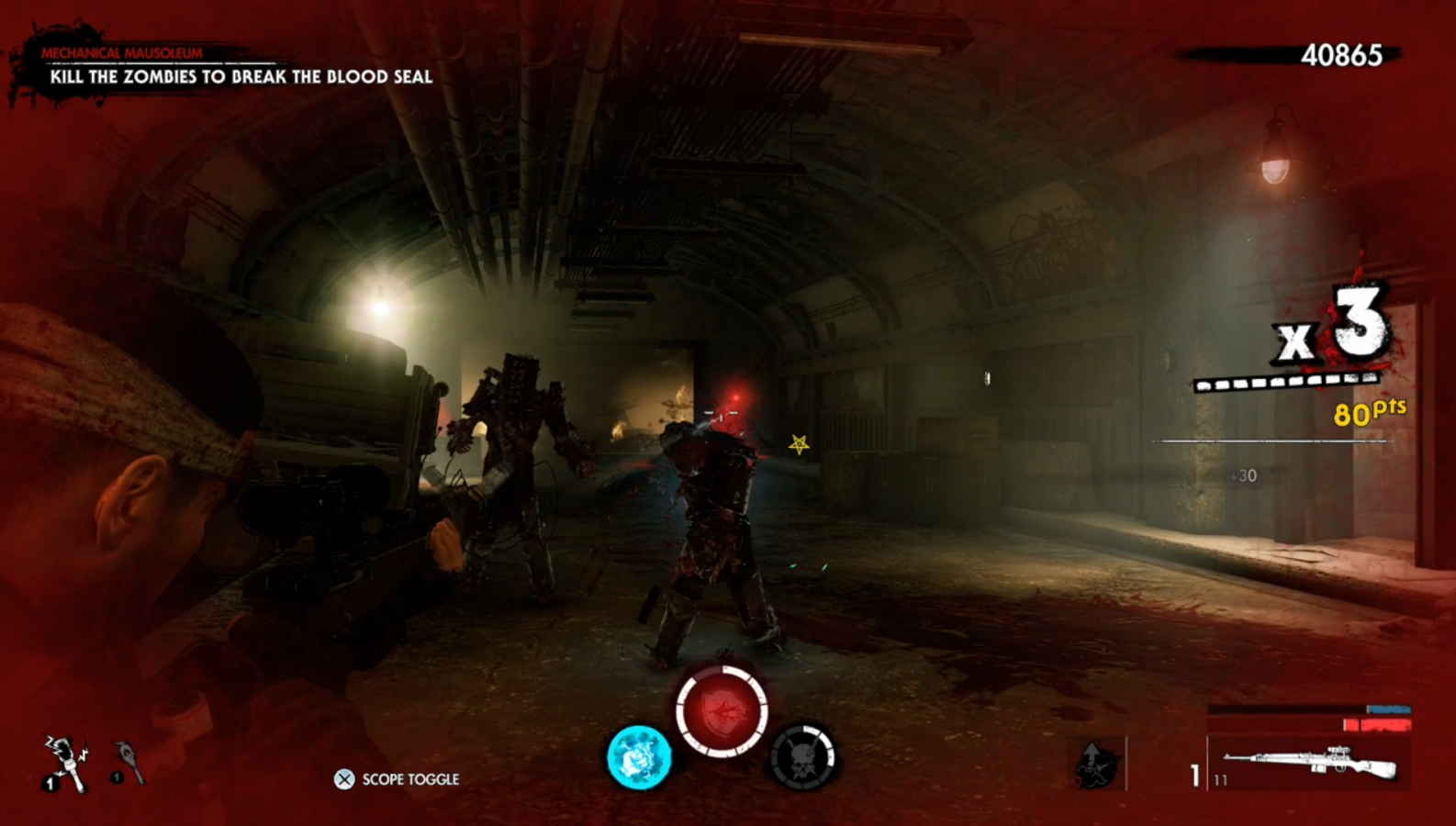 The gameplay is that of your typical third-person shooter. You can fire guns, throw grenades, crouch, hide behind cover, vault, melee, etc. You can even stomp on zombies to crush their skulls and possibly obtain items as a result. You can get ammo, grenades, and even med-kits from corpses. These small replenishments are pretty nice. Besides some enemies, there are also occasional ammo crates that you can find around the levels. These provide unlimited refills, so use them to your heart’s content. On the other hand, grenades that you find in crates are finite, so use them carefully. There’s also a takedown that you can perform after filling up a special takedown meter. Killing enemies helps fill the meter, and performing the takedown instantly kills an enemy, plus rewards you with health and ammo as a bonus. This made takedowns act as a last resort heal in dire situations.

Similar to other shooters, you can only carry one primary gun, one secondary gun, and a pistol. The primary is always a rifle, the secondary is a sub-machine gun or a shotgun, and your pistol can be a revolver, a typical pistol, or even an automatic. You can select your loadout at workbenches that are only located in safe rooms. You can swap weapons with ones that you find in the world, but otherwise you have to wait. In Left 4 Dead fashion, the campaign missions are broken up into segments by safe rooms. The safe rooms are locked down rooms that you need to open and safely enter in order to get some reprieve from the dangers around you. This is your chance to resupply with a variety of crates around you, grab a new med-kit if you’re out, and use the workbench to adjust your loadout, upgrade weapons, and alter your perks. It even respawns any dead teammates after you’ve reached it. 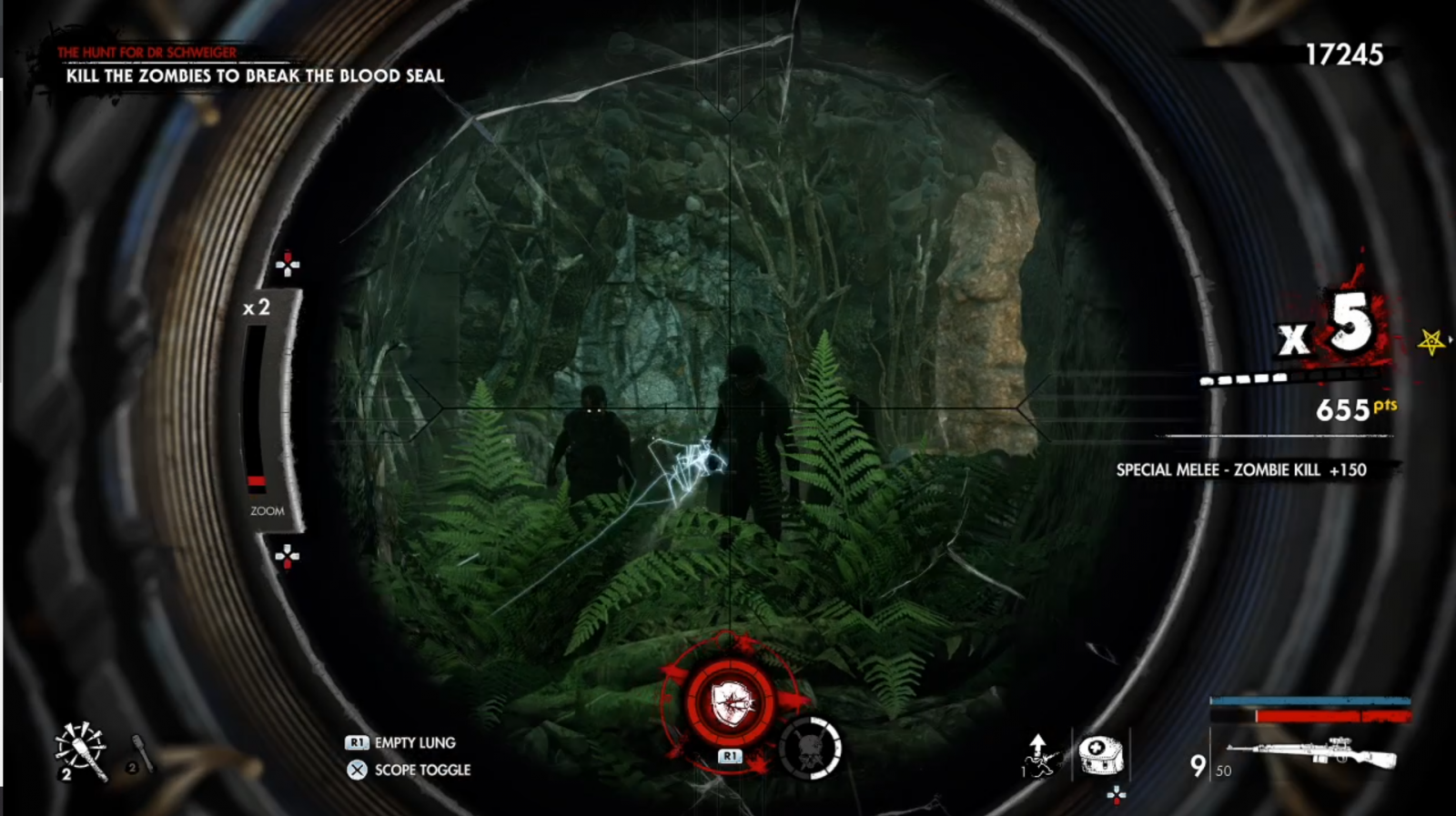 The workbenches are very important, especially the further you get into the game. As you perform various tasks, you’ll unlock new perks. Once unlocked, they start off bronze and offer unique effects, then after fulfilling certain requirements, they can upgrade to silver and gold. Silver and gold both offer additional effects that can be extremely helpful. For example, Hardened reduces more and more melee damage as it levels up. There are plenty of perks to unlock, so choose ones that fit your playstyle. Of course, perks only take effect if you equip them, and you must unlock more perk slots by leveling up. You can have a maximum of five perks equipped at a time, but that’s not a problem. Upgrades, on the other hand, require upgrade kits if you want to obtain them. Upgrade kits are scattered throughout the levels and finding them gives you the chance to increase the power of your weapons. For example, you can buy mods that add elemental damage to some bullets, increase the magazine size of a gun, improve the range of your rifle’s scope, and much more. My rifle and shotgun have become so much more brutal since I’ve upgraded them, and man, have I had fun with them.

For anyone who has played the Sniper Elite games or Strange Brigade, you’ll notice some familiar features here in Zombie Army 4. This was my first Zombie Army game, so the aforementioned games are my closest points of comparison. If you line up perfect shots in just the right way, you’ll activate the bullet cam and watch a sweet cinematic shot of you blowing apart whatever part of the zombie you hit. You may see a brutal eyeball explosion, a jarring jaw-splitting, a traumatic testicle popping, or any other fatal kind of shot. As for Strange Brigade, you get the stomping that I mentioned earlier, along with some fantastical aspects of the game, such as an electric fist melee attack and even a divine Thor-like hammer ground pound. Things like that keep the game from feeling too serious, but also doesn’t cause the game to become too wacky. It finds a good sweet spot in the middle. 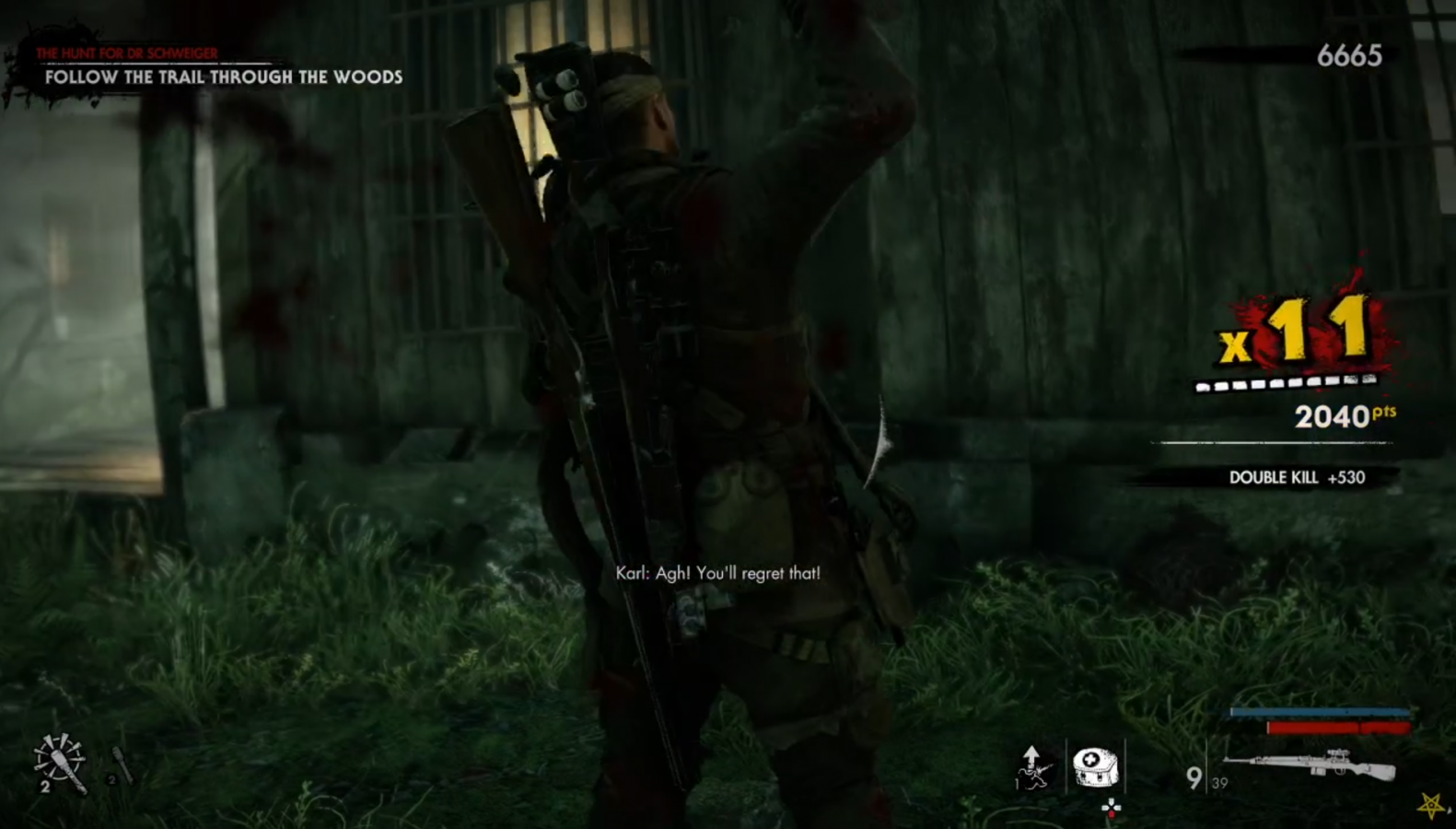 Now, what would a zombie game be without a horde mode, right? Horde mode offers four different maps to play on, where you’re tasked with fighting off and mowing down waves of the undead. You start in a relatively small area at first, but more areas open up as you progress through the waves. You start with a pistol but have access to a nearby rifle immediately. As more areas open up, new weapon cases will appear and offer other weapons for you to swap to. You don’t have to swap, but the option to do so is nice. There are also supply drops that will occasionally spawn somewhere in the area that you’ve unlocked. These can provide some powerful weapons or even some much needed health, so check them out if you can. As for ammo, don’t you fret; there will always be an unlimited ammo refill create available in horde mode. The only catch is that its location changes every couple of waves. Speaking of waves, after you’ve completed 12 waves, you have the chance to run away through a newly opened escape route and attempt to reach an exit portal. Escape through that portal and you’ve officially won that map’s horde mode. If you want to keep fighting, however, you can ignore the escape route and see how many more waves you can survive.

The horde mode is pretty fun, especially with a friend. Coordinating with a partner and taking down zombies as a team felt amazing. As more powerful zombies showed up, such as the Butcher, Suicider, Heavy Gunner, Commander, etc., I felt more confident knowing that someone had my back. Sure, you can face horde mode alone, but it’s much better with a team. Some of those enemies are a pain to fight alone, especially if several gang up on you at the same time. I didn’t experience it with a full team of four, but I’m sure that more partners make for an even more intense experience. That being said, the campaign mode can also be played in co-op with up to three other teammates. Again, I’ve only done so with one friend, but having that friend by my side was all that I needed to feel like I could truly take on the world. If you do want to play with others, I need to mention that it’s online co-op only, so keep that in mind. 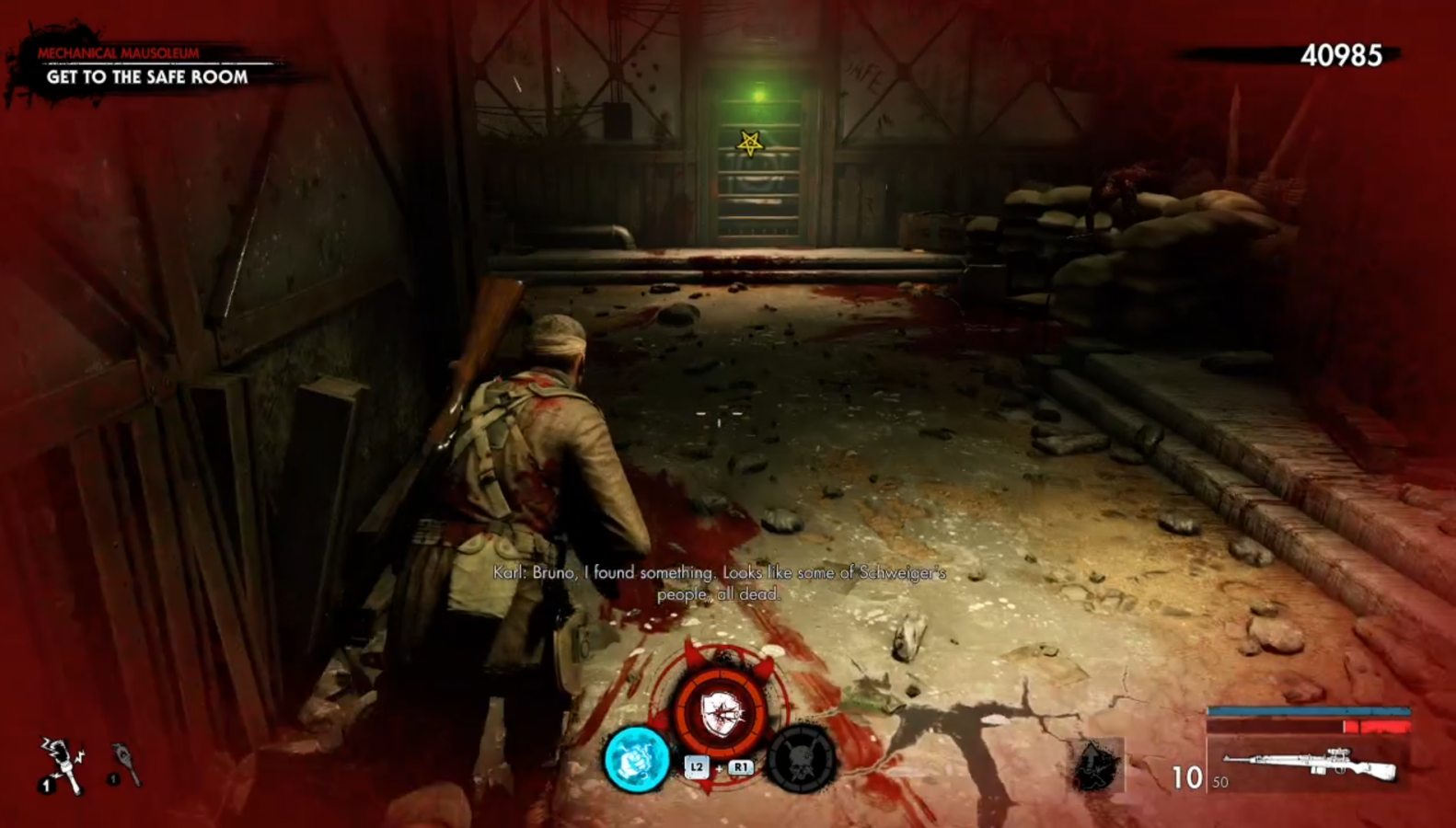 Even without having any prior experience with the Zombie Army franchise, Zombie Army 4: Dead War has been an incredibly fun zombie shooter. Whether playing solo or with a friend, I’ve been caught up in the gunfire and gore. The day before writing this, my friend and I actually played for 7 1/2 hours straight, so that’s a good sign. The gunplay is fun, the enemies are tough yet provide an enjoyable challenge, and there’s a fair amount to do between the campaign and horde modes. I hope that they add DLC levels, both campaign and horde mode, in order to improve that replayability and give me more reason to mow down more zombie soldiers. If more gets added, I’m sure I’ll hop right back in with my zombie-killing buddy.

Zombie Army 4: Dead War is a great addition to the franchise, even if it's your first time experiencing it. The gunplay is awesome, especially if you activate a kill cam shot. The enemies provide a tough challenge, so be careful and don't get cocky. You can do it alone, but I highly recommend shooting with a buddy.

Codi loves to play video games and watch movies. He will watch almost any kind of movie just to experience them. His ideas take inspiration from the shows and movies he watches, and games he plays. He also loves a good pun.
Related Articles: Zombie Army 4: Dead War
Share
Tweet
Share
Submit