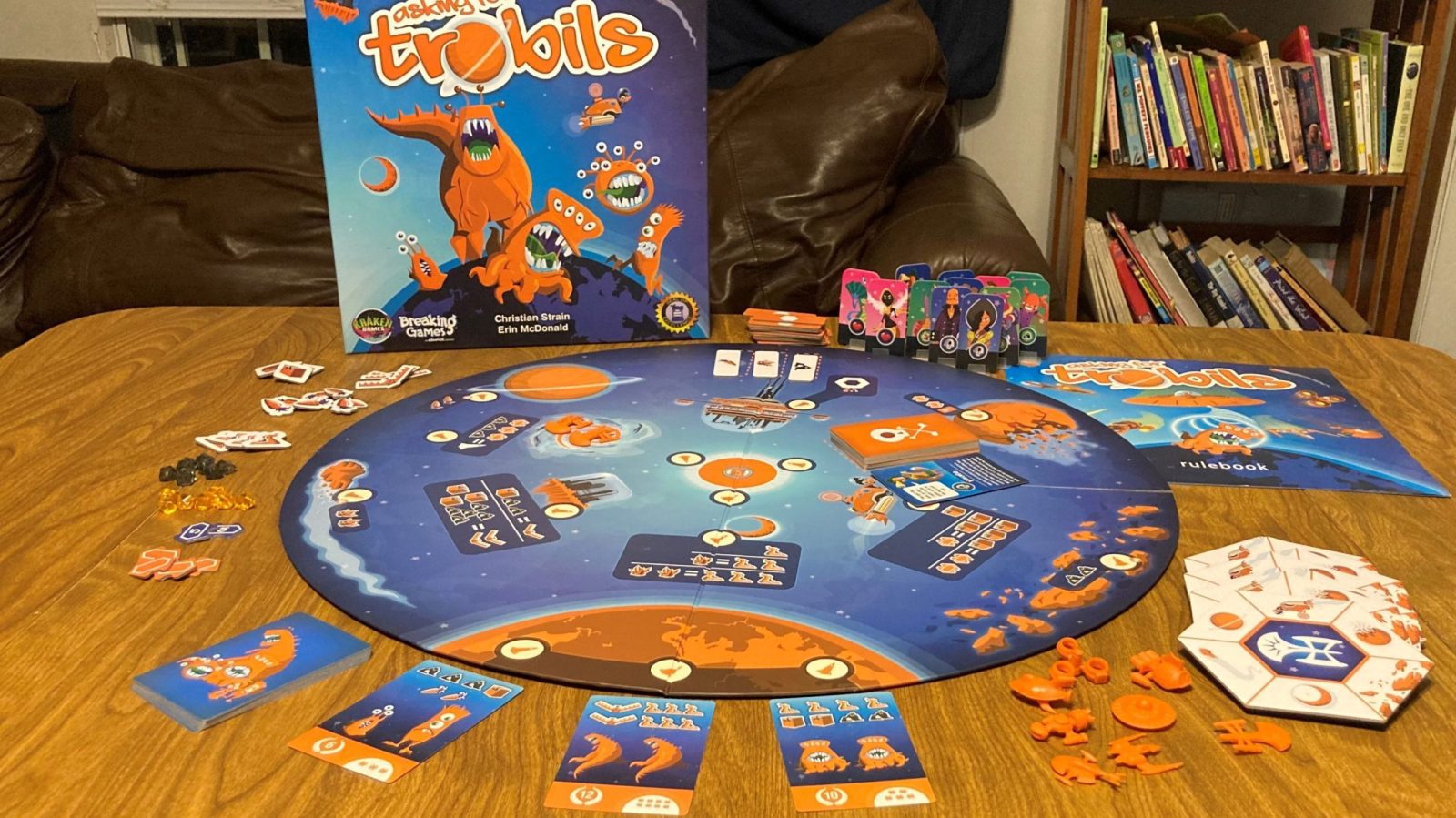 Don’t let Asking For Trobils’ orange-dominant color palette and cartoon-looking spaceships fool you, it’s an enjoyable game of strategy, resource collection, and worker placement with a twist. This review is of the second edition of the game with updates to the art style (hello definition and other colors than orange) as well as some refinement of some of the cards in terms of the designs and wording to provide clarity.

The “story” of Asking For Trobils is that the planet Paradise has been taken over by alien monsters called Trobils. You and your fellow players take on the role of Trobil hunters tasked with cleaning them up. To do so, you need to gather various resources to add ships to your fleet, capture Trobils, and even gather traps to help get higher-value Trobils.
The worker placement twist works hand-in-hand with the game’s action economy. You only have a certain number of ships that double as your workers. At all player counts except two, you start with one ship and are able to add at least a minimum of one more to your collection (one for six or seven players, two for 3-5 players.) For the two-player game, you start with two and are able to purchase two more during gameplay. 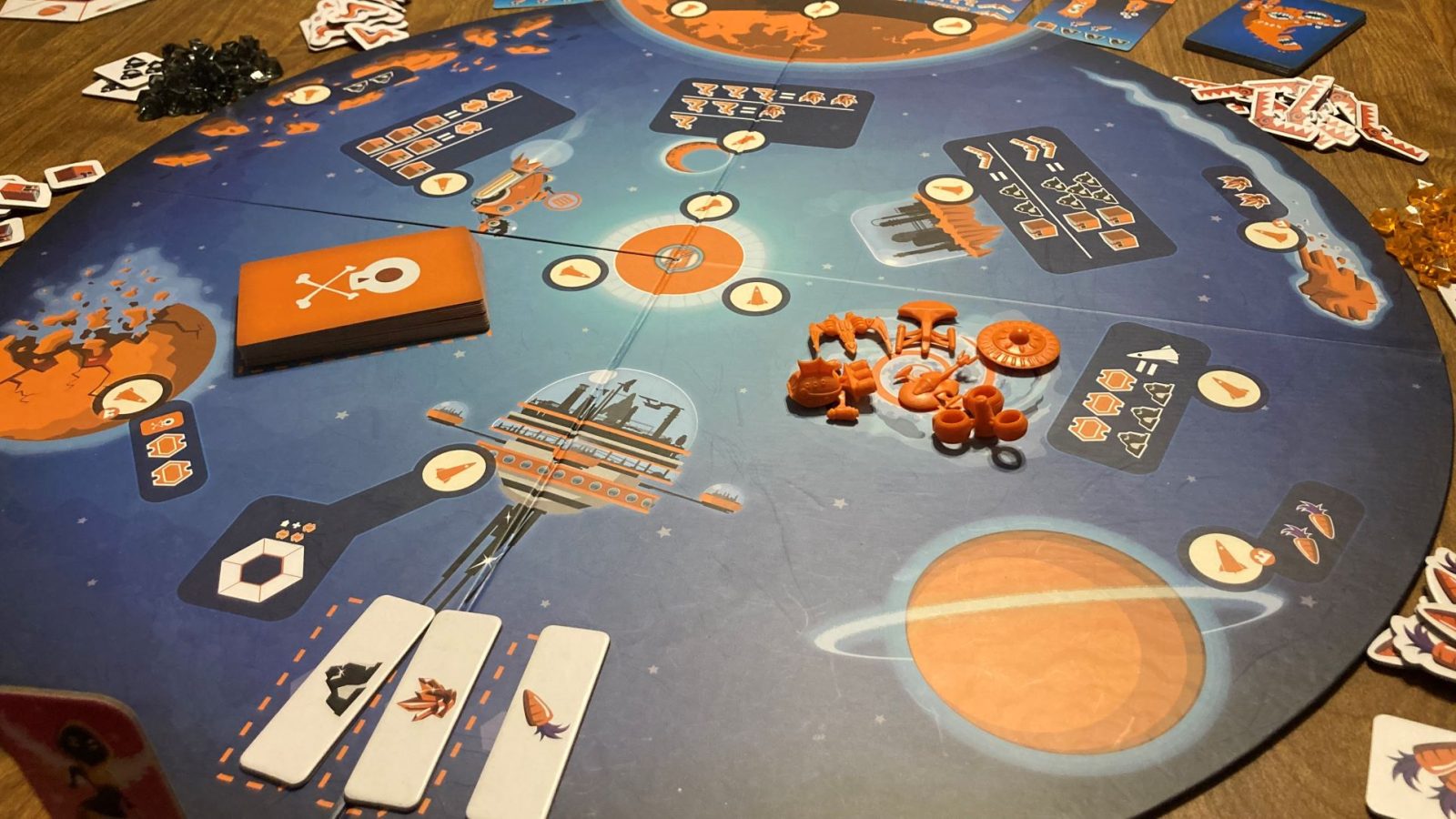 Asking For Trobils’ game board showing locations and resources to gain

Once all your ships are placed at the game’s various locations, you have to spend a turn to retrieve them from the board. However, unlike in many traditional worker placement games, you can be “bumped” from a location. That actually works in your favor because you get to take the bumped ship back to delay the need to spend a turn to retrieve all your ships.

The game’s locations allow you to collect resources such as space slugs, crystals, ore, and space carrots or take cards from the game’s RiffRaff deck. Those cards can help you by allowing you to move your ship again (action economy!) or even place characters such as pirates, merchants, or courtesans that allow for you to take a second turn at a location in exchange for some credits. Yeah, they went there. 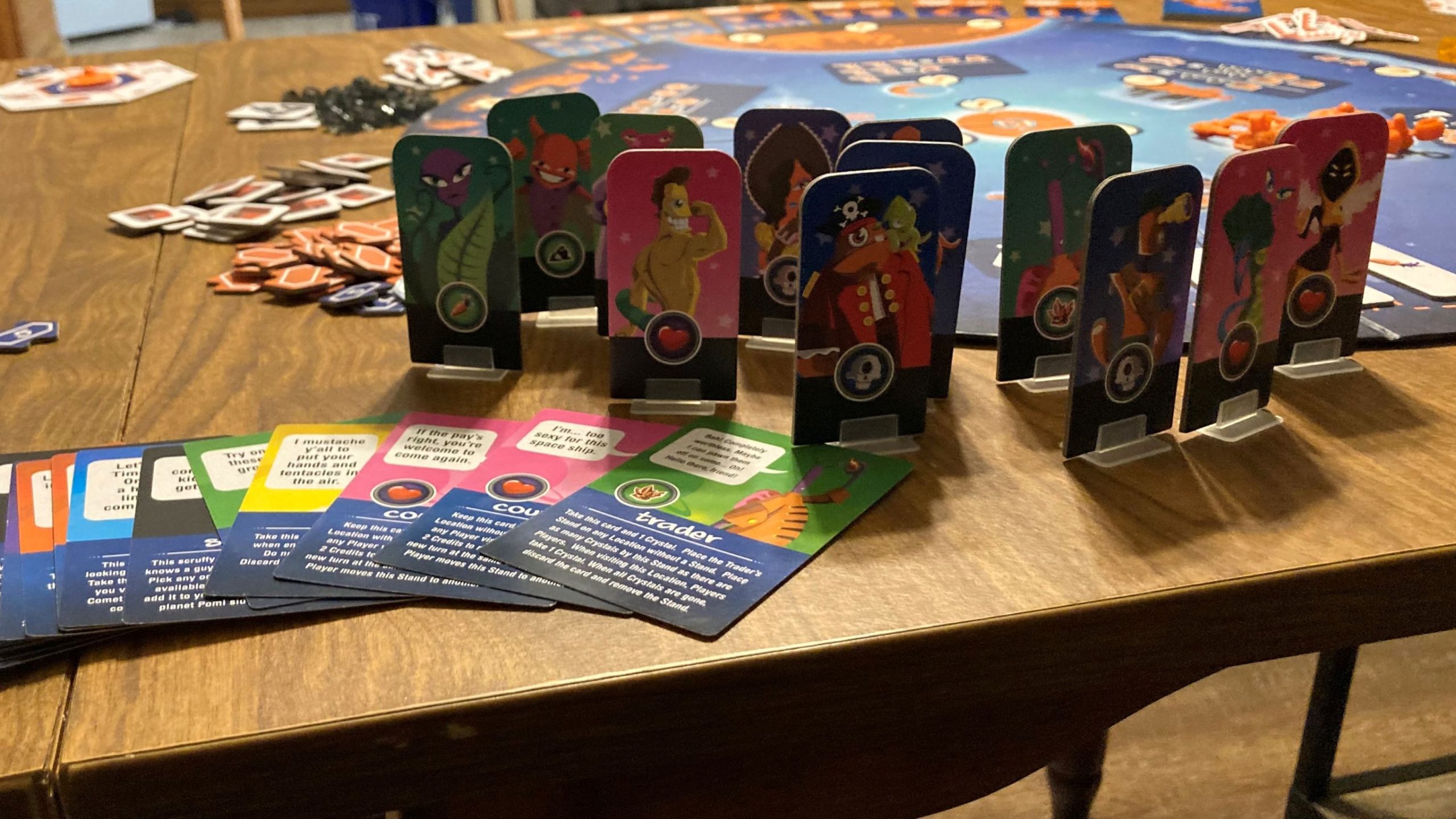 The RiffRaff deck is one of the most entertaining parts of the game, especially for fans of iconic science fiction franchises. You’ll recognize amusing takes on characters and tropes from Star Wars, Star Trek, Firefly, and more including memorable quotes and one-liners. While the game is fairly straightforward, these character cards can provide valuable bonuses.

One location allows you to purchase connections to add to your ship card that give you resource bonuses when you visit a specific location. Each resource location on the board gives you a set resource when you visit, but these connections add bonuses. You can choose to stack the same resource, so instead of getting say two space carrots, you can add a space carrot connection to that location’s space on your ship card to get a third. Or you can instead add another resource, like a crystal, to that location. So, you’ll get those two space carrots plus a crystal each time you visit. That can allow you additional flexibility to avoid bumping your opponents from prime locations that would give them a valuable extra turn.

That dynamic is what makes Asking For Trobils such a player-forward experience. You may find yourself placing your last ship in a prime location hoping that your opponent will still choose to go there so you can get an extra turn. Or you may instead choose to go for that needed resource at the expense of spending a turn just grabbing your ships.

At Paradise, there are several Trobil cards displayed, determined by player count. Each card has a resource cost displayed at the top. The more difficult the resources are to gain, the more valuable a Trobil is as shown by the victory point number on the bottom of the card. When a Trobil card is captured, a new card is flipped up from the Trobil deck to replace the captured Trobil.

This deck not only serves as where players gain victory points, but it’s also the game’s timer and source of bonus endgame scoring conditions. During setup, a random collection of city cards are shuffled into the bottom of the deck with the number of city cards being dependent on player count.

When all of the displayed Trobil cards are replaced by city cards, this signifies that Paradise has been cleared of Trobils and the game ends. Each city card has a unique scoring bonus that converts amounts of resources into victory points. This can lead to a late-game scramble for whichever resources flip up as the Trobil deck dwindles.

Asking For Trobils isn’t without its flaws, though. The table creep is real, folks. You need room for the large circular game board, player areas consisting of ship cards and ships, personal resource stashes, and acquired Trobil and RiffRaff Cards, plus all the available resource piles. 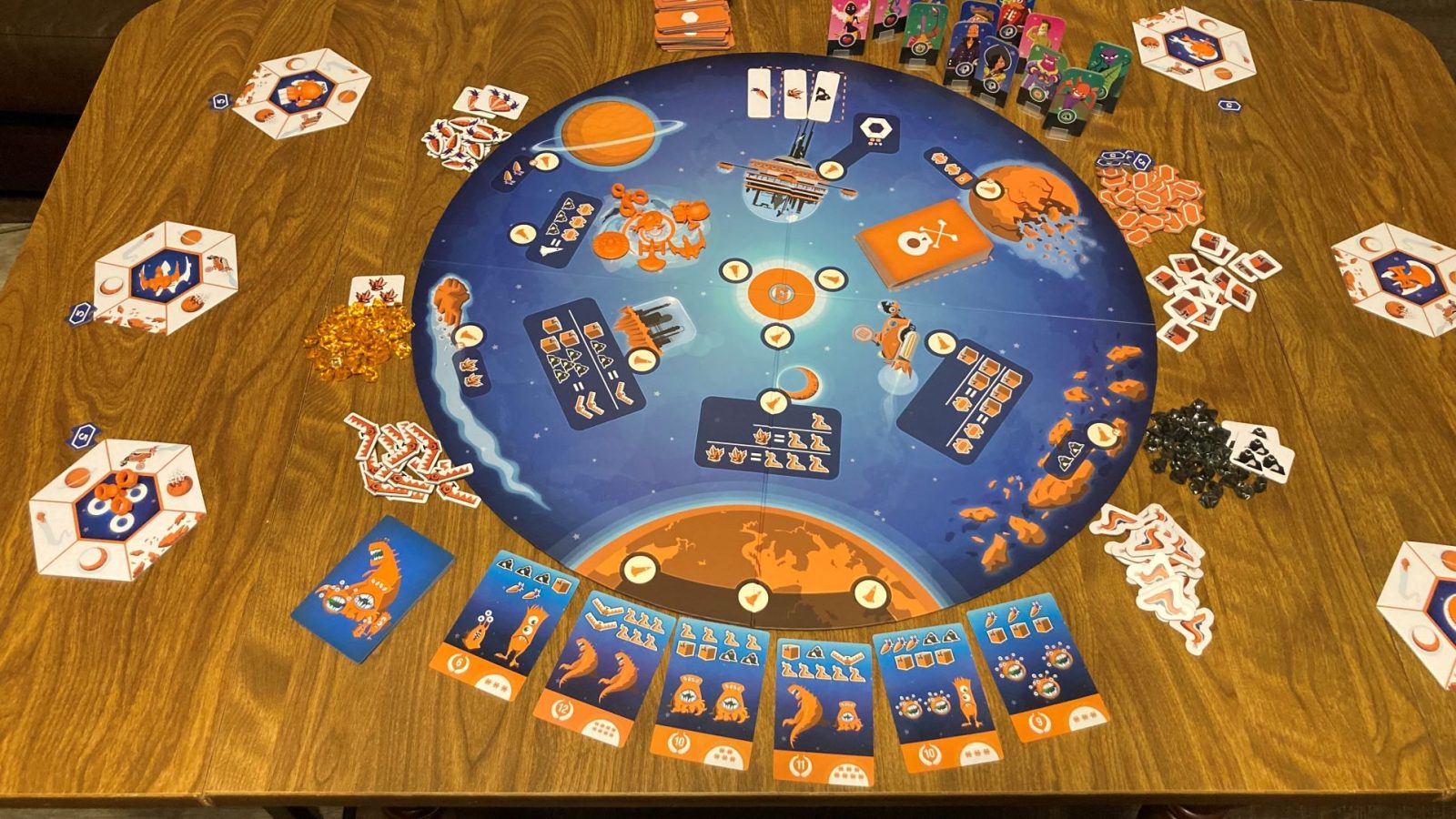 Speaking of resources, the game box itself doesn’t offer much in the way of organization for all the different resources. It does handle the card storage well with a nicely-designed area that allows you to alternate card directions to separate the Trobil cards from the city cards and the RiffRaff deck. It also has a nice curve laid into the plastic to hold the game board in place. However, the resources, connection cards, ships, and RiffRaff standees are largely free to be jumbled throughout the box. We took to bagging up as much as possible to ensure an easy setup, but a high-quality organizer would go a long way.

Asking For Trobils’ rules are simple to understand and don’t get in the way of an enjoyable experience for kids who can sit and stay engaged for a longer game as well as adults. The science fiction references and humor of the RiffRaff deck as well as the player interactions over the question of to bump or not to bump (take that, Shakespeare!) lead to a lot of laughs and an overall great time.

Asking For Trobils’ bright and cartoony exterior covers a great game that’s truly bigger on the inside. Its surprisingly deep strategies can be enjoyed across the generations (even the next one!)

Jeremy is a freelance writer covering multiple subjects from board games to sports to barbecue. He lives outside of Charlotte, North Carolina with his wife and their three kids. They love to play boards game together, ranging from Qwixx and Azul and Splendor to Lord of the Rings: Journeys in Middle Earth.
Related Articles: Asking for Trobils, Tabletop
Share
Tweet
Share
Submit