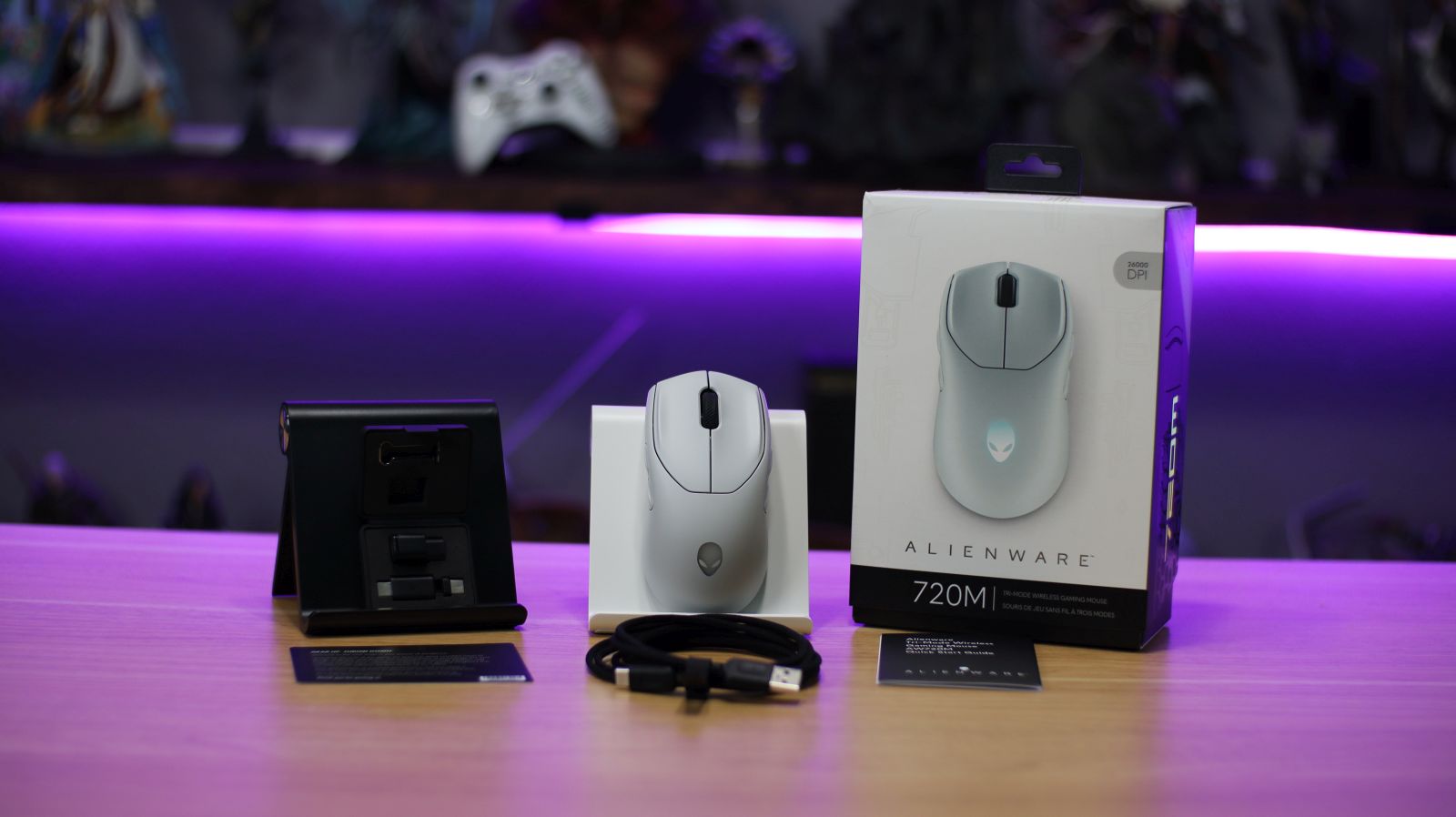 Peripherals are a funny thing. There are folks that think Logitech mice are the best thing since sliced bread while I’d rather use them for skeet shooting. Others think Razer has the market cornered, but I think Roccat gives them a run for their money. One name that doesn’t often spring to mind when talking about input devices, however, is Alienware. At CES 2022 they looked to change all that with their Alienware Tri-Mode Wireless Gaming Mouse – the AW720M. It doesn’t have a slick name like the Mamba, Ironclaw, or Glorious Master D, but what it does have is an impressive amount of new features that might give them a running chance at standing among the greats. Let’s charge it up and get a closer look.

Alienware, a subsidiary of Dell since 2006, has established themselves as one of the leaders in the computer space. Their desktops and laptops are mainstays, offering some substantial power, albeit at a cost. This mouse joins a few other peripherals like the Tri-Mode wireless headset, a high-powered webcam, a video conferencing monitor, a curved gaming monitor, and a fresh installment of their Aurora desktops. While we’ve not gotten our hands on the others yet, this mouse represents a fresh turn for the company they are dubbing Legacy 2.0. I’m not so sure about that naming convention, but let’s look at the AW720M. 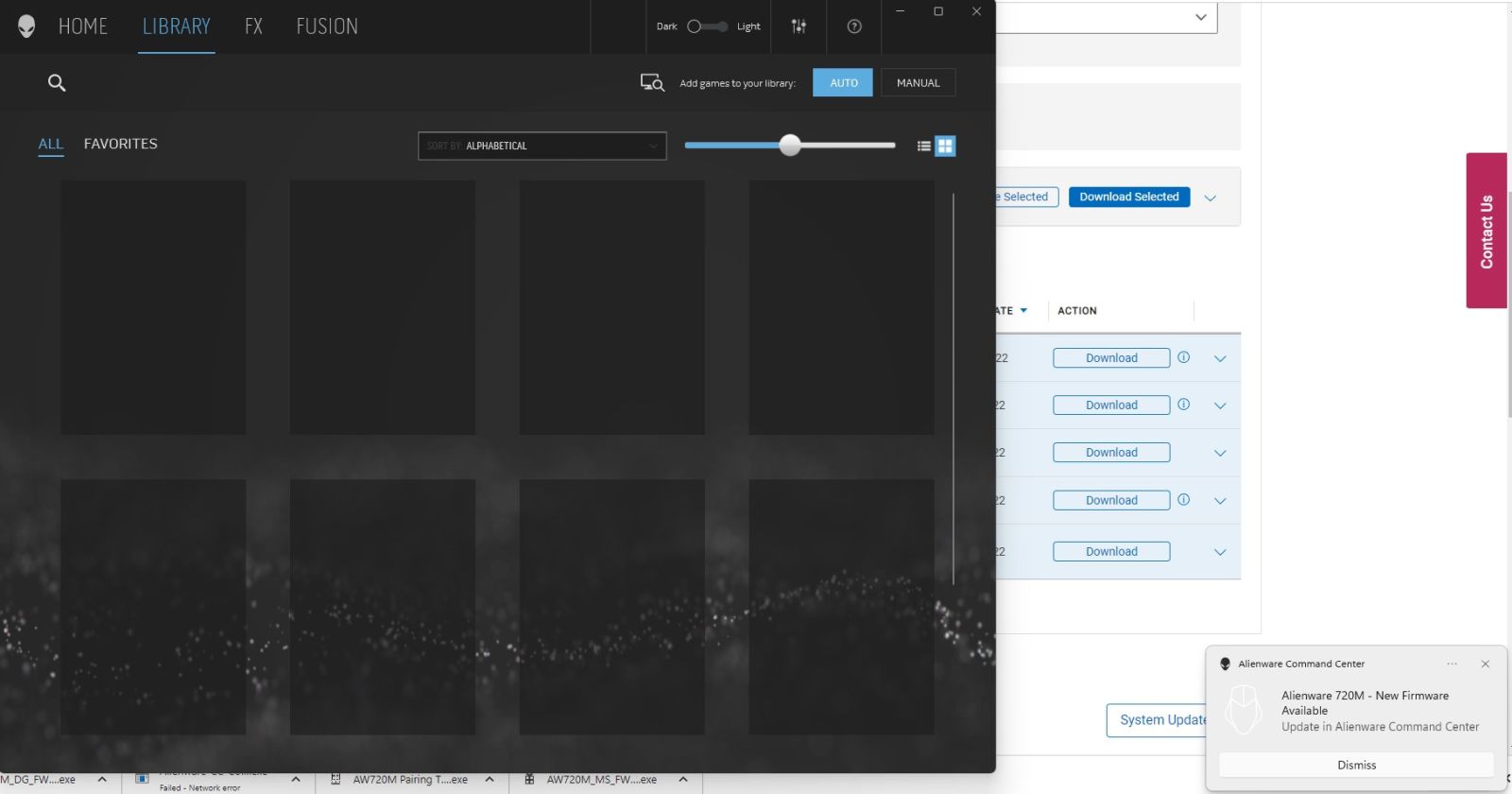 Unboxing the device I was immediately surprised by the number of charging options available – versatile hardly covers it. The included wires are the key to the Tri-Mode name as you can use it in wired mode with the included 6.5 foot USB-C cable, which charges it as well. With a flip of button you can also go RF mode or Bluetooth, which rounds out the last two “modes”. Plugging in the tiny USB-C tip, you can also charge the device as well as use it courtesy of the magnetic tip. This means you can leave it connected and then pull it when you want to use it to go cable-free. It’s a slick design, but you won’t need to use it that often – this little beast will hold a charge for upwards of 420 hours of use over Bluetooth, or 140 hours for RF. If there’s a good reason to stop using RF, there it is. Alienware claims that just five minutes of charging will provide over 20 hours of gaming, so even if you do manage to run it out of juice, you’ll be squared away in the time it takes to make a sandwich.

The device is ambidextrous, which is perfect for lefties as well as right handed folk, though it has a few things to be improved. The body is a unified white plastic (black is also available) with a light checkering pattern where you’ll grip the body of the device. While I’m ultra-careful about not getting things on my gear, it doesn’t stop the simple oil that resides in our skin. In short, you need rubberized grips or a better texture beyond what’s here. Flipping it over, we also see basic plastic skates instead of Polytetrafluoroethylene, or PTFE. PTFE has proven time and again to be the more smooth glide, so it seems like an oversight for the inevitable next version. Neither thing is insurmountable by any stretch, but you expect to see both on a mouse in this price bracket. 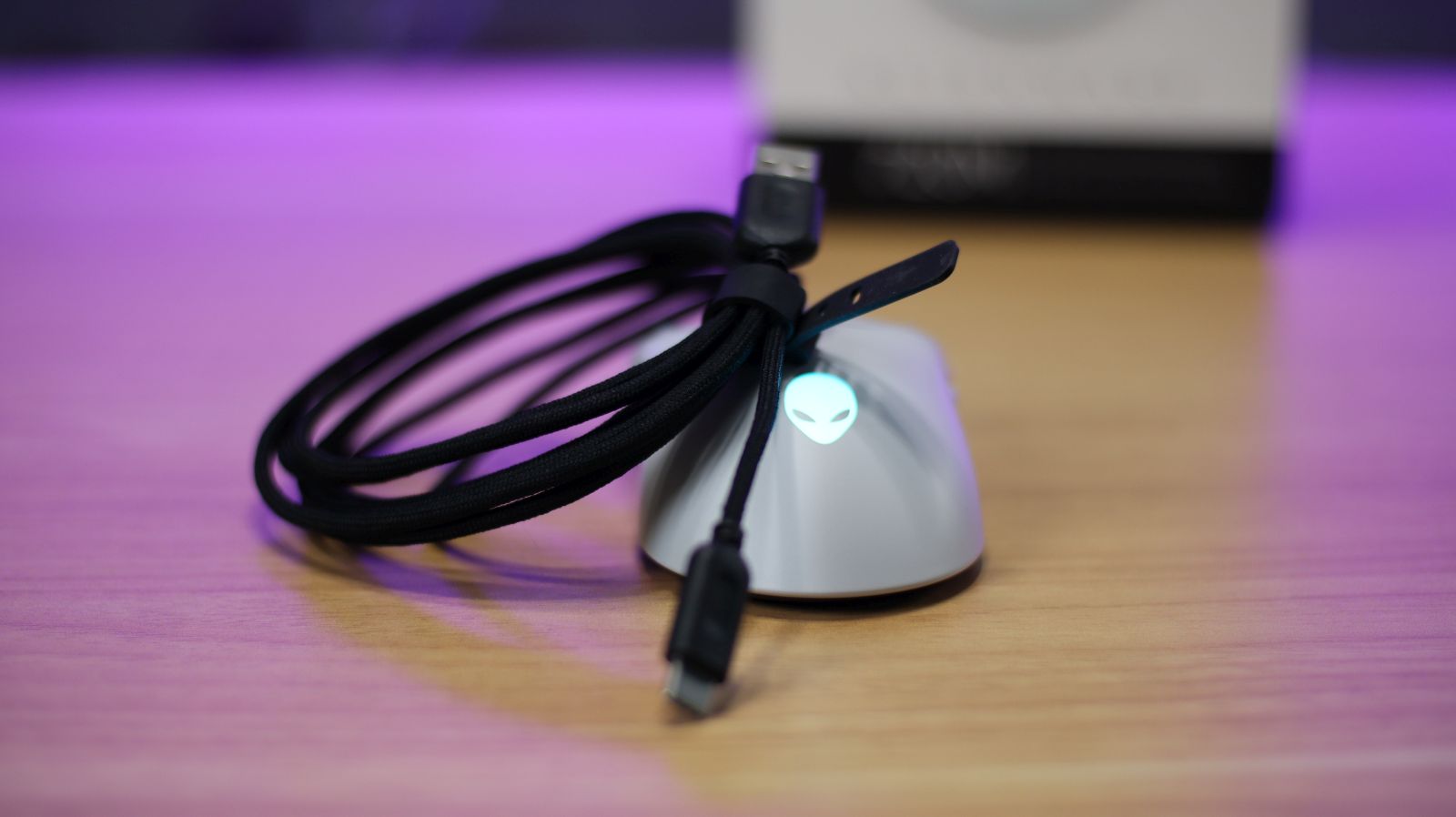 The AW720M is right in the middle of the pack for weight. Weighing in at 3.14 oz (89 grams), it’s heavier than the Steelseries Prime 2.82 oz (80g), and markedly lighter than the Naga Pro which weighs 4.1 oz (117g). It’s far lighter than the Logitech G502 Lightspeed 4.59 ounces (130g), and slightly heavier than the Razer Basilisk 3.6 oz (101g), and the Logitech G Pro X Superlight is likely to fly off your desk in a stiff breeze at 1.41 oz (63g). Measuring 4.93” long and 2.44” wide, it doesn’t feel overly large, fitting my meaty hands without a problem. It feels not unlike my other mice from Alienware’s contemporaries, including the Razer Viper Ultimate.

Under the hood, the resolution on this mouse is staggering. The Razer Naga Pro has a 20,000 DPI sensor, as does the DeathAdder V2. SteelSeries Prime Wireless mouse uses an 18,000 DPI sensor, with Corsair’s Katar Pro XT landing at 17,000 DPI, and Logitech G Pro at 16,000. I tell you all of this so you understand the field when I tell you that the AW720M has an optical resolution of 26,000 DPI. I do a lot of video and audio editing in my work, so the additional fidelity is greatly appreciated. I can’t say that it’s made a difference in my kill/death ratio, but I can say it’s highly responsive. 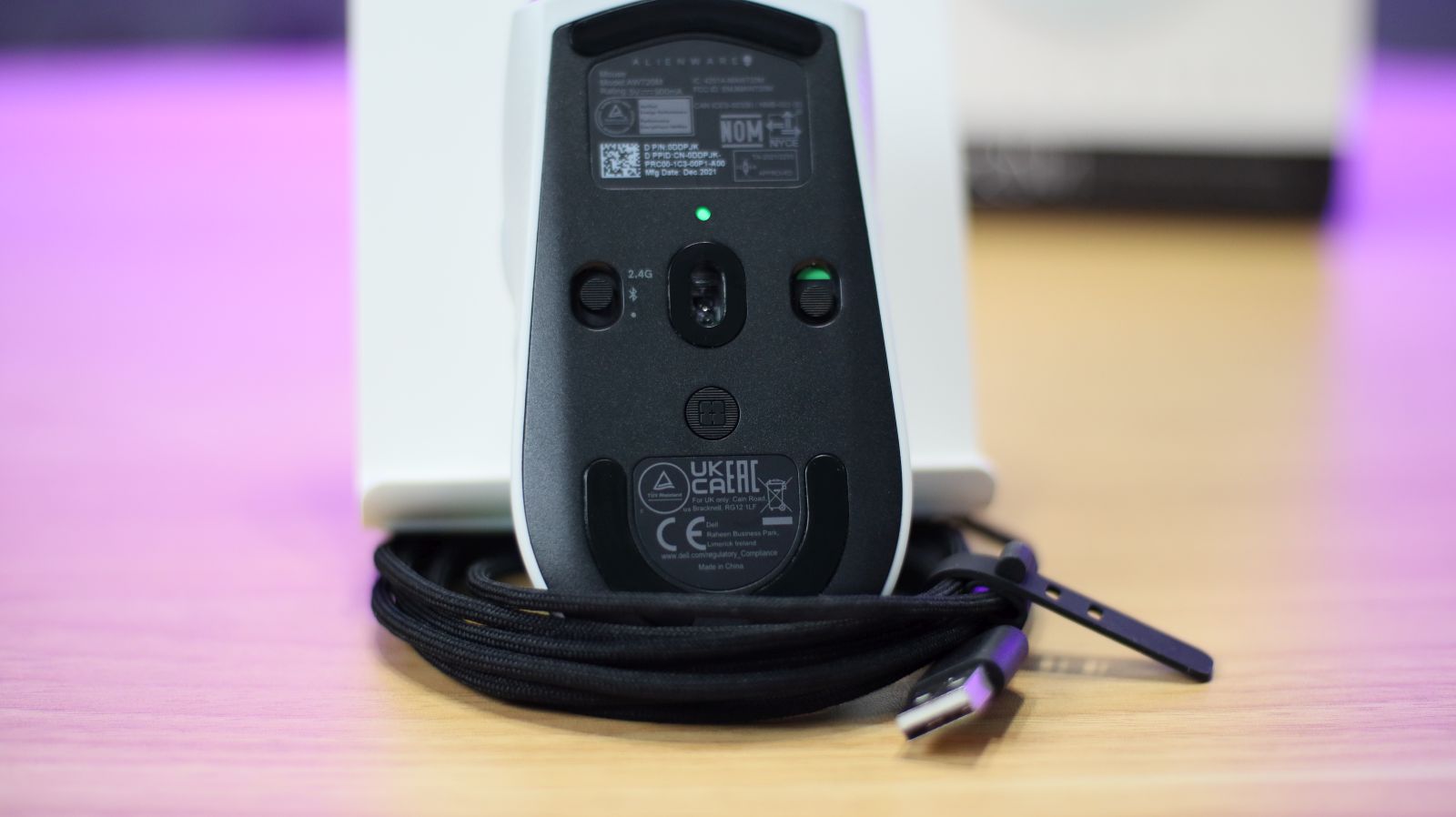 When running off the USB cable, the AW720M enjoys a polling rate of 1000 Hz. There’s one mouse out there with an 8000 Hz polling rate, but it’s probably better to know what polling rates actually mean. The earliest mice had a polling rate of just 125 Hz, which translates to an 8ms delay between action and reaction. Bumping that to 250 Hz cut that time in half, as you’d expect – 4ms. Again, doubling to 500 Hz gets that to 2ms, with 1000 Hz getting us to just 1ms of delay. That means an 8000 Hz polling rate would give you 0.125ms of delay, but frankly anything more than 1ms is imperceptible. Combined, the polling rate and optical sensor on the AW7020M make for a mouse that is beyond accurate, and at a level that exceeds any competitor.

The buttons on the AW720M are satisfyingly “clicky”, protruding more like a key than a paddle, as you can see in the pictures. All four of the side buttons, as well as the two primary buttons, have a small ridge rather than the texturing found elsewhere on the device to help you locate them quickly. I tend to use a palm grip which left them easily within reach, though I can’t speak to the claw grip – best I can approximate it should be fine. The scroll wheel is a rubberized and ridge type, with detents for scrolling, and I prefer both – well done, this. 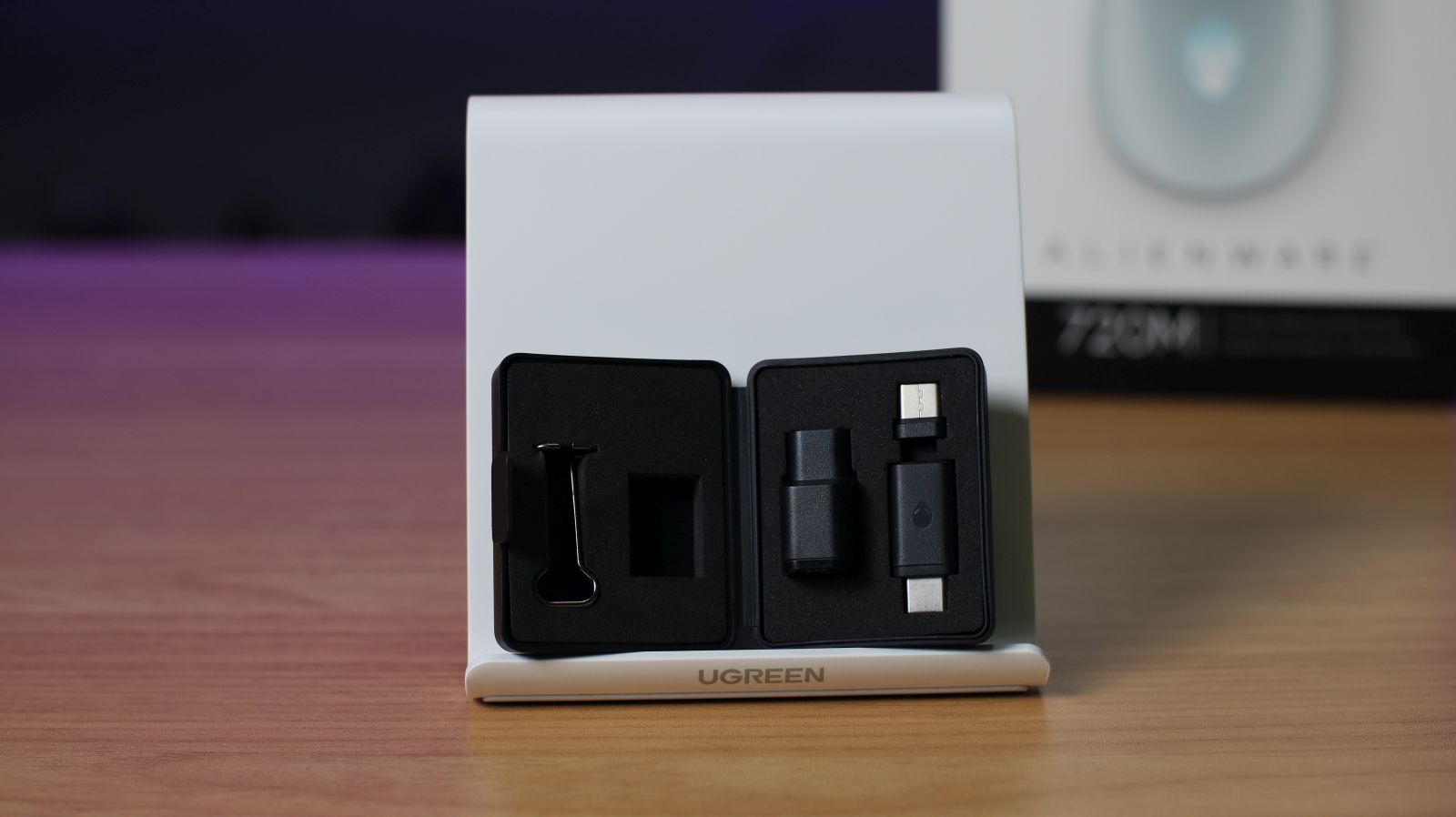 Ultimately, while there are a lot of important features and functions needed to make a good mouse, one of the most critical is how it feels when you use it. Well, I’ve written five reviews in a row, totalling over 10,000 words today, and it’s all been with this mouse. I’ve also used it for nearly a month on a daily basis for 12 hours at a time split between work, video and photo editing, and gaming. I feel confident that I can say I’ve used it enough to declare that it’s very comfortable, and I’m surprised to say so. I normally prefer a right handed contoured mouse, but this one has a great feel in the hand. I can’t say it’s become my new favorite, but it’s a close second.

Heading into the software, there is a great deal of configuration available. The Alienware Command Center software is a bit bloated if you aren’t using their entire ecosystem, but all of your functions are baked into this larger package. Skipping over all of that, let’s head into the mouse configuration tabs. 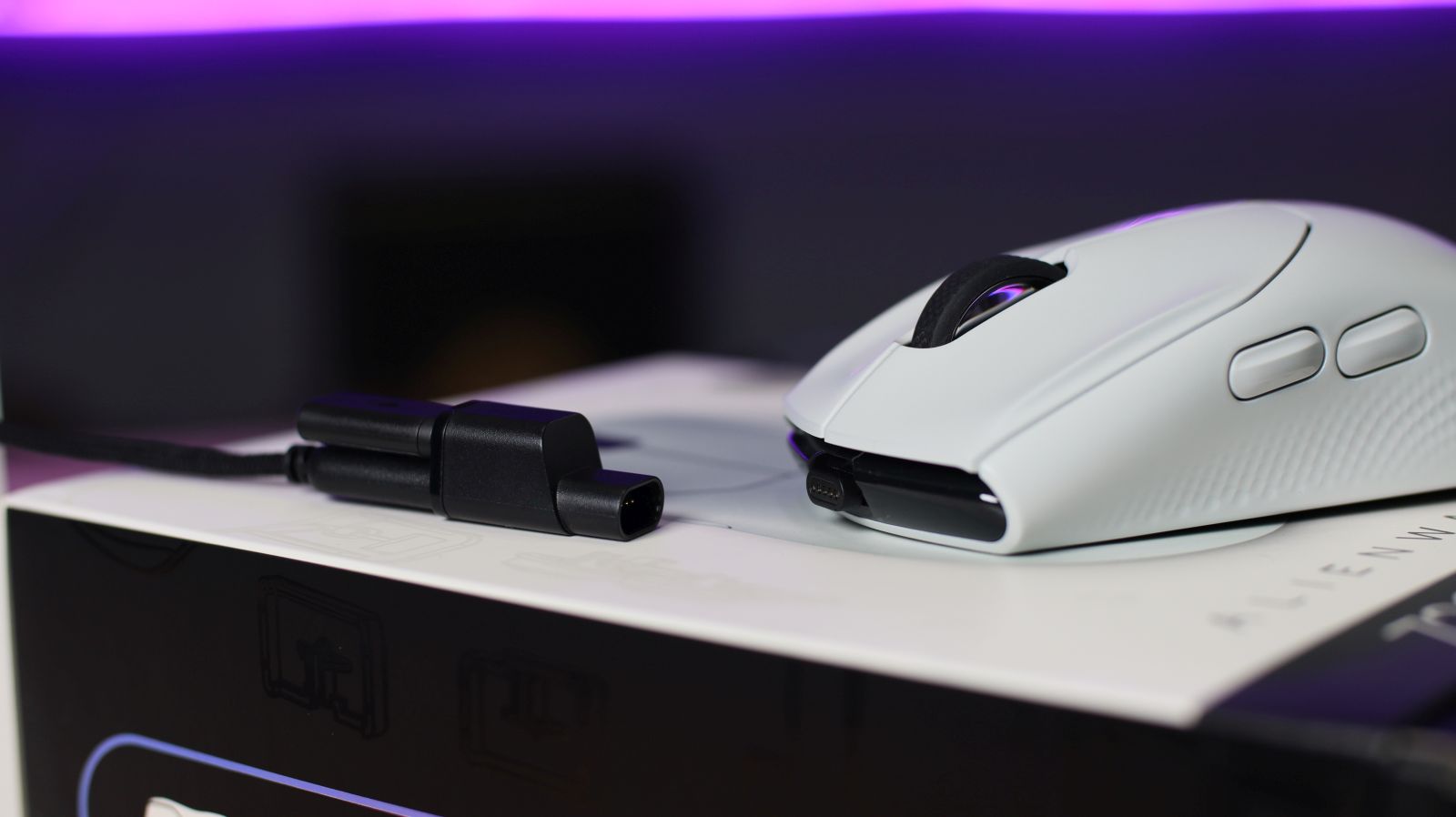 Underneath the FX tab you’ll find a wealth of goodies to adjust to fit your personal taste. Under Lighting you can set the little alien head logo to pulse between any of the 16 million possible colors you could want, with RGB value granularity if you are so inclined. Adjusting brightness, tempo of pulsing, morphing, breathing, or color spectrum blending — whatever you’d like to match your aesthetics.

In the Macro tab lies a full macro system to remap your mouse in the general sense. Granted, you’ll likely map the buttons inside your game, but when you are poking around in Windows you might want to adjust a button or two. Well, it’s all here, including the two primary buttons. 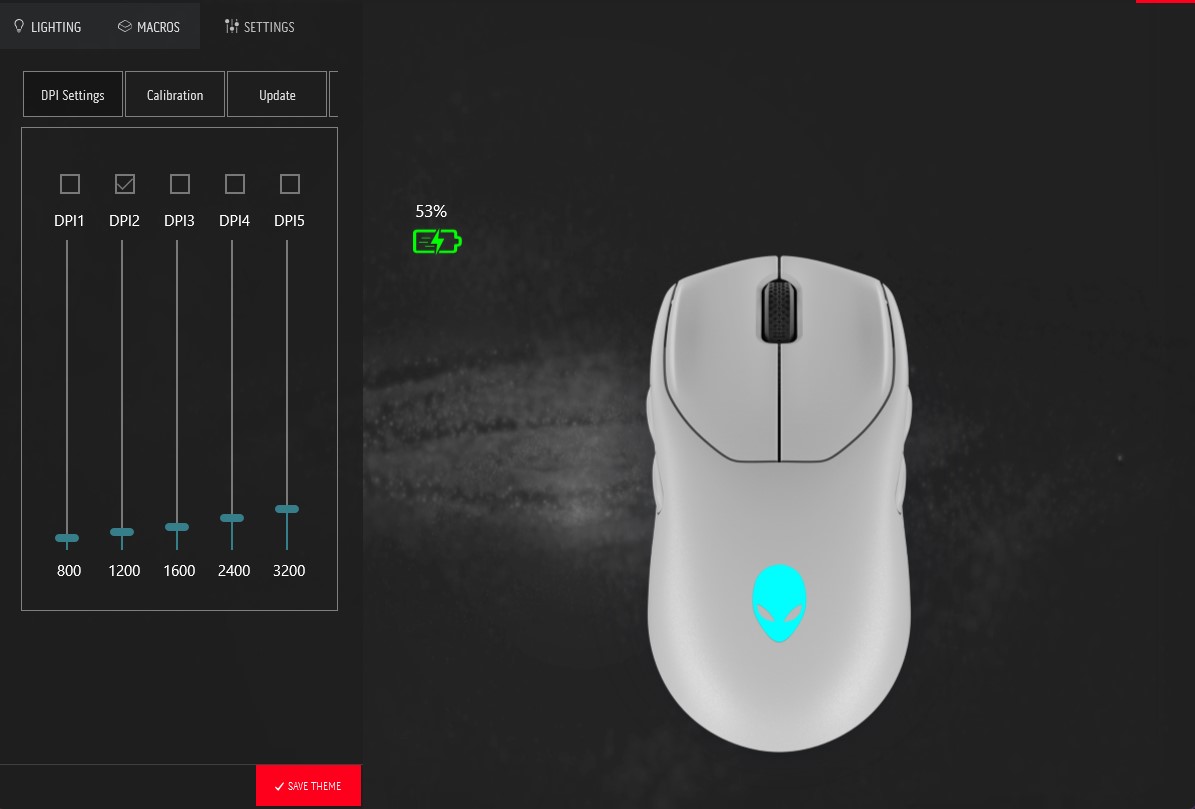 Creating your own macros is where things get useful. There is a keystroke recorder to have the mouse execute a number of key presses as many times as you wish. You can also record a macro if you are doing something exactly the same way every time. Shortcuts allow you to map a key to opening a specific program, though I couldn’t come up with when you’d use that particular function. Textblock will paste in whatever you put in a plaintext box as often as you’d like, which could be useful for dropping in something like a signature or a heavily-reused phrase or code snippet. If you are the type that likes to invest in the easy button, it’s here for you.

Depending on what mouse you are coming from, the AW720M will either be a massive improvement or at the very least a moderate one. Like a good pair of basketball shoes won’t land you a slot in the NBA, neither will AW720M make you an all-star pro gamer. What it will do, however, is give you an incredibly rapid charging mouse that will serve you for years to come, complete with the highest DPI on any device on the market, and by a wide margin. Also like a good pair of sportsball shoes, it’ll set you back $149.99 if you don’t catch it on sale. At this price you’d expect things like changeable weights, a lighter body, or more buttons, so it feels like it might be a touch overpriced. This places it right in the middle of the pack once again amidst other high-end mice from other manufacturers who do have those features. For a sophomore effort from the gaming hardware giant, this is a worthy entry. Sure, there’s room for improvement, but what’s on offer is pretty great all on its own.

Delivering the best charging speed on the market, and the highest DPI as well, the Alienware Tri-Mode Wireless Gaming Mouse delivers on those two promises flawlessly. It does come at a premium price, however, and with a few basics missing. Not bad by any stretch, but room to improve for a 2.0 version.