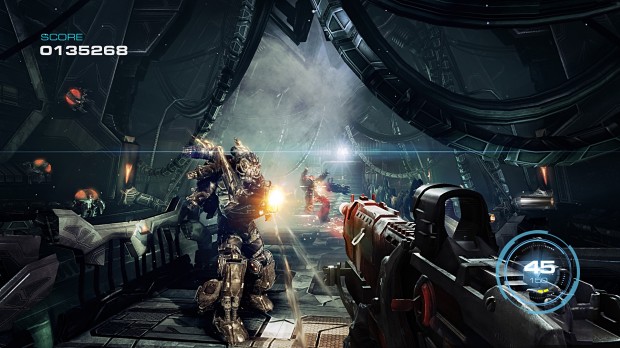 When you launch up your Xbox 360 and see the name “Alien Rage,” you have a general, albeit a tad stereotypical, feel for what kind of video game experience you’re about to partake in if you choose to purchase the product. It’s more than likely going to be very generic and bland shell of a video game that seems like more of a cash grab than a product guided out by passionate designers. This is where I come in and either confirm your assumptions or deface them entirely and tell you why Alien Rage is one of the best games released this year. I can assure you the latter will not be happening.

If you are unaware, and I definitely do not blame you if you are, Alien Rage is a “classic” first person shooter. By classic, I mean you rack up points as you pop off headshots and explosive kills. For a first person shooter, it handles fairly well. There are times when you feel like your shots aren’t precise enough, which on its own isn’t that big of an issue. The real issue arises when you begin to run into the games incredibly unfair difficulty. There isn’t a whole lot of diversity in the enemy types, but to get around this, the game instead just throws 5+ versions of each enemy at you at every combat encounter.

The worst of these are the grenade launching baddies, who consistently fling explosives at you no matter how many of their pals you’re currently having to deal with. This, thanks to how quickly you die, can lead to multiple game overs, which in turn leads to multiple “Why the hell am I playing this?” thoughts. These thoughts are only heightened when you reach one of the many tedious boss battles that typically end with you running around in circles until you can finally drain the enemy’s life bar.

One of the better features in Alien Rage comes in the form of perks you earn as you gain points. There are three sets of perks that require you to hit a certain number of points before you unlock them. These perks range from a 50 percent health gain to obtaining more ammo for your limited amount of weapons. The flaw that holds this system back from becoming more than a simple “tacked on” feature is just how difficult it is to unlock the perks. As stated, there are three unlockable sets of abilities available. With each tier taking at least three, usually more, hours to unlock. While this clearly adds some length to the $14.99 product, it definitely doesn’t make you want to play it any more. It’s simply a missed opportunity in a game that seems hell bent on being as boring as possible.

Alien Rage kicks off by introducing you to a new planet. A planet that, as you may be able to guess, holds a very valuable collection of minerals. We Earthlings then land on this planet and call it ours. All is not well, though, as another species later lands and also claims it as theirs. The two sides work together for a while but again, as you can guess, tensions rise and a war breaks out. And if there’s one thing that we have learned from video games, it’s that war typically leads to the threatening of our existence. After that, the story heads downwards into hardly comprehensible nonsense that usually revolves around the main character being forced to shoot a glowy object. But watchout for enemies with grenade launchers, because they will kill you. Multiple times…

As uninteresting as the story is, the voice work 1-up’s (1-down’s?) it in every possible way. The voice cast, noticeably not mentioned whatsoever in the credits screen, delivers one of the most painfully atrocious performances my two ears have ever heard. The secondary characters that chime into your ear as missions go on are not overly awful, they simply deliver very flat performances. The main character, however, is by far the worst of the group. Looking very similar to Dwayne “The Rock” Johnson, he spouts off quips that are more akin to Duke Nukem than to anyone else. It’s clear that CI Games wanted their protagonist to be the typical “hard-ass” you find in other shooters, but their attempt falls laughably on its face.

Unreal Engine games are known for not being the most beautiful products, that’s an established opinion. But Alien Rage takes that to a whole new level as it can occasionally display textures that take even longer to display than most games with pop-in texture issues. Or even worse, the texture refuses to pop-in, leaving a dry, and gray item staring you down. It isn’t just the textures that abuse your eyes, so doesthe design of the environment. The sci-fi, “future planet” motif has become more than played out by this point, but Alien Rage lives in denial of that as every corner you turn has a shiny (wait for the texture to pop in…) new piece of art for you to stare at. Or in my case, completely avoid in hopes that the level you are playing will soon be over.

Let’s be real, no one expected a title called Alien Rage to light the world on fire. But with a boring title like that, you figure CI Games would have taken the games concept and at least made it as ridiculous as possible. This ridiculousness wouldn’t have made the fundamental game much better, but it sure as hell would have made the product more enjoyable in some way. In reality, though, Alien Rage is an insipid product that you’re more likely to fall asleep to than enjoy playing.

Alien Rage is as bad as you expect, and something that all video game lovers should keep their hard earned dollars away from. That is, in case you enjoy dying randomly, putrid visuals, and watching a story that couldn’t keep interest from the simplest of minds for more than thirty seconds. If that sounds like something you desire, then I have a game for you. If not, may I recommend saving your money up for one of these nice new consoles?